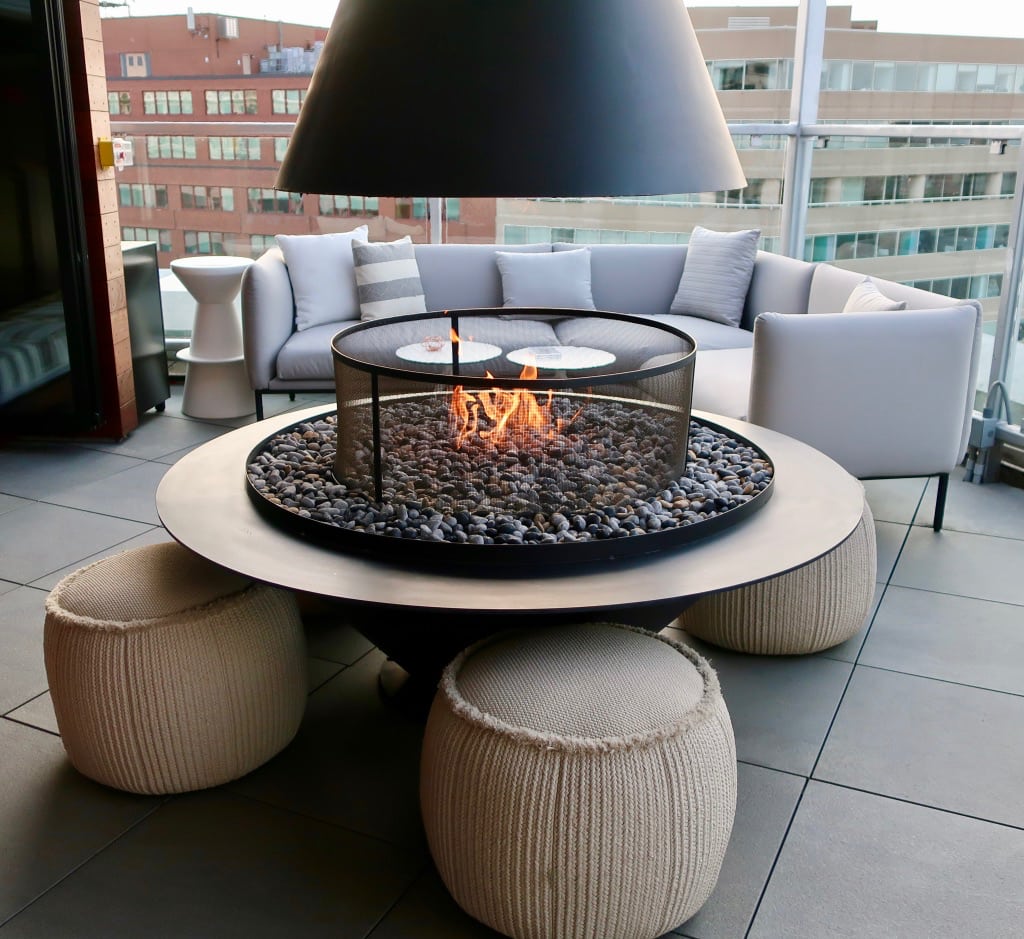 You might be thinking, “Romantic? In the town known for its no holds barred politicking?” Well, yep. Because the District of Columbia is also admired for its cultural institutions, free museums, and moving monuments. And, of course, Cherry Blossoms.

We’ve chosen three of our favorites – for different reasons. The first, for its “Girl-Power” audacity and touch-of-naughtiness interior. The second for the American Scandal that spurred the terminology of all American scandals to come. And the third for its location in the midst of foreign embassies right off Dupont Circle.

Choose one or plan a stay in all three for a week-long exploration of the US Capitol and bordering Montgomery County and Prince Georges County MD.

Want to see a mural of Ruth Bader Ginsberg made from 20,000 painted tampons? You’ll have to book a room at the she-shed of hotels in DC, Hotel Zena. Or – at the very least, walk into the lobby for a drink and gander.

Hotel Zena reverberates with women-power, as evidenced, even before you walk in the door, by a four-story mural on its exterior depicting two women warriors. Though clearly feminine, however, this “part hotel- part art gallery”  stops just short of being “cutesy.”

This is thanks to Andrea Sheehan, Principal of Dawson Design Associates, known for her “mostly dark, sexy spaces.”

Sheehan asked “What would a hotel designed for women by a woman look like?” She was given free reign by the “very boutique” Viceroy Hotel group to realize her vision. The result is both provocative and fun: a vibrant celebration of feminine power that resonates with guests of both sexes.

It was the “art gallery” aspect that struck me first as I walked through the doors. A carved wood “serpent” light sculpture snakes along the ceiling.

The serpent, I was told, represents the one that tempted Eve to eat from the Tree of Knowledge in the Garden of Eden. Hence, the apple mural behind a lobby table, and the name of the bar, Fig Leaf. Both of course, are nods to “Bad Girl” Eve, whose only crime was disobeying a man because she wanted to know stuff.

Even the amusements near the enthralling RBG mural are artsy and geared towards women. There’s a bright pink billiards table, and an adult-sized Lite Brite mounted on the wall that allows all kinds of jewel-toned creativity.

Two art installations beg for closer scrutiny. One is the “Wall of Honor” depicting an illuminated array of tiny charcoal sketches of notable women from antiquity to current day. (See how many you can identify).

The other is “Talking Sequins:” an arrangement of 12,000 custom protest buttons pinned onto fabric along two sides of a curved wall. It’s meant to evoke a gown, and actually feels like a soft dress.

Hotel Zena is sexy right into its guest rooms, where showers, emblazoned with kick-ass Greek goddesses, spiral inward like nautiluses. Mine, the Circle view studio king offered a stunning view of Thomas Circle and beyond.

Food and Drink at Hotel Zena

If meeting friends for a quick drink and a bite before heading out, Fig and Leaf is the perfect choice.

But to make an evening of it – complete with a dip in the rooftop pool – head up to Hedy’s where blazing fire pits set the mood.

Sunset is a spectacular time to enjoy some great food and drinks. Salads are Farmer’s Market fresh – and OMG  – order the Parmesan Truffle Fries. (I gobbled them up so fast, only a few were left for the photo).

Rooms average $299 per night, with Circular King Suite at $465. Rates increase in high season and decrease off season. Valet parking $50 per night.

There’s never been a hotel so fraught with figurative baggage, so memorable in its role in the takedown of an American Presidency, as The Watergate Hotel in Washington DC.

The suffix, “gate,” in fact, has applied to every scandal since, traced back to this newly renovated and mod-sexy hotel on the Potomac River. Yes, Richard Nixon ordered the “hacking” of the office of the Democratic National Committee (DNC) during the 1972 Presidential Campaign; a burglary of hard-copy files that now seems downright quaint in light of current breaches in our nation’s cyber-security.

Interestingly, the new and improved Watergate, a Washington DC luxury hotel a five minute walk from the Kennedy Center, does not hide its notorious history: It celebrates it with a sense of humor – and therein lies its vast appeal. That and the fact that the whole place glistens with groovy 60’s architectural elements and stylish rooms. The Watergate is, according to its new tagline, “Unapologetically Luxurious.”

First Impressions of the Watergate Hotel

The Watergate Hotel blends seamlessly into the curvilinear Watergate Complex. This six-building compound in the Foggy Bottom neighborhood of DC was conceived and constructed in the Mad Men 1960’s.

Standing in the hotel lobby is akin to being inside a golden Slinky; coils of gold everywhere – as reception desk base, on support columns. It’s quite the snazzy décor, mirroring the exterior of the surrounding buildings. This curvaceous motif continues into the lobby’s Next Whisky Bar – separated from incoming guests by a glowing wall of bottles the color of flaxen hair. The Midas Touch abounds.

Employees are on the ball, friendly and efficient – but must move you along quickly. The place crawls with well-heeled guests, no doubt a certain morbid curiosity at play. But really, there is nothing morbid about the current hotel, a Legend in the Preferred Hotels and Resorts of the World group. It’s a stunner.

Rooms at the Watergate Hotel

Some guestroom dimensions might be on the small side, but the impact is large, especially if you ask for a room with balcony overlooking the Potomac River.

The coil motif continues into the rooms, on leather bed backboards and 70’s leather chairs. Each white duvet is warmed up with a grey houndstooth throw.

There’s a mod-sexy grouping of cocktail glasses on a side table, a flat screen TV, and all the modern amenities that a luxury hotel can throw at you.

But, here’s the fun part. Bedside tables look like filing cabinets (haha). The complimentary pencils are stamped, I stole this from the Watergate Hotel. And room key cards read, No need to break in.

For a once in a lifetime kick – reserve the “Scandal Room 214″: The Sexiest Room at One of the Most Romantic Hotels in DC

On June 17, 1972, E. Howard Hunt and G. Gordon Liddy, who helmed The Watergate break-in team, stationed themselves in The Watergate Hotel’s room 214. They used the room to monitor the burglary at the Democratic National Committee in the Watergate Complex office building, next to the hotel.

This room has been decorated in collaboration with Lyn Paolo, the costume designer for Scandal, and contains items from the Watergate Scandal period.

A record player with 45 singles, binoculars, a manual typewriter, a reel-to-reel tape recorder, curated book collection and several pieces of furniture serve as a throwback to the 1970s. Modern amenities are also included– a 48″ flat screen TV with episodes of Scandal available for viewing. A spa-like bathroom with La Bottega amenities and two “Cover Up” robes to enjoy during your stay.

Food and Drink at the Watergate Hotel

The in-house Next Whisky Bar, Kingbird, and Top of the Gate all offer food and drink. Top of the Gate is the place to be for summer sunsets, affording far off views of the Washington Monument.

Rooms and suites from $225 per night for smallest room on summer weekends. Over $3,000 for a Diplomat 2-bedroom family suite. The Scandal Suite from $1,199 per night.

What makes The Ven Embassy Row, (formerly just the Embassy Row Hotel) one of the most romantic hotels in DC? It’s soft colors, curved lines, and location. The Ven sits on a mansion-lined street, just 84 steps from DuPont Circle in Washington DC, and is surrounded by stately town homes and foreign embassies. (Hence the name).

Upgraded even more from its first “boutique” redo in 2014, when it was spiffed up and modernized, The Ven continues to merit its esteemed place in the Washington DC constellation of top hotels.

Check-in at the desk is quick, casual and friendly – and for now at least, behind plexiglass, per Covid protocols.

In the lobby, former jewel tones have been “toned down” to muted shades – creating a soothing space encompassing several stylish seating areas and a long, shining oblong bar.

As of April ’21, renovations were continuing with two restaurants, the rooftop pool and lounge, and a basement Art Museum coming on line shortly.

Guest Rooms At The Ven

All 231 rooms are stylishly appointed, with nearly-floor to ceiling windows. In shades of gray and eye-popping teal, the somewhat small space (with even smaller bathrooms) feels much larger than it is.

In the morning, watch the sun illuminate the magisterial Indonesian and Portuguese Embassies across the street from a dreamy, don’t-want-to-leave-it bed.

Food and Drink At The Ven

The new central oblong bar is sure to be a hit with guests and friends who’d just as soon not leave the premises after a long day.

Currently, two in-house restaurants, Fred and Stilla, with lobby and rooftop service, and Ven Café, are in the works.

For now, staff help serve coffee and a morning snack in the lobby. It will be grab and go post-Covid.

Amenities at The Ven

Play Foosball and Scrabble (on a giant wall-hung board) in the Basement.

The large Fitness Center features state of the art machines. Rooms from $155-$250 per night includes wifi, morning coffee and snack. Parking $48 per night.