Home » Historic Getaways » York PA: All Revved Up With Lots of Places To Go 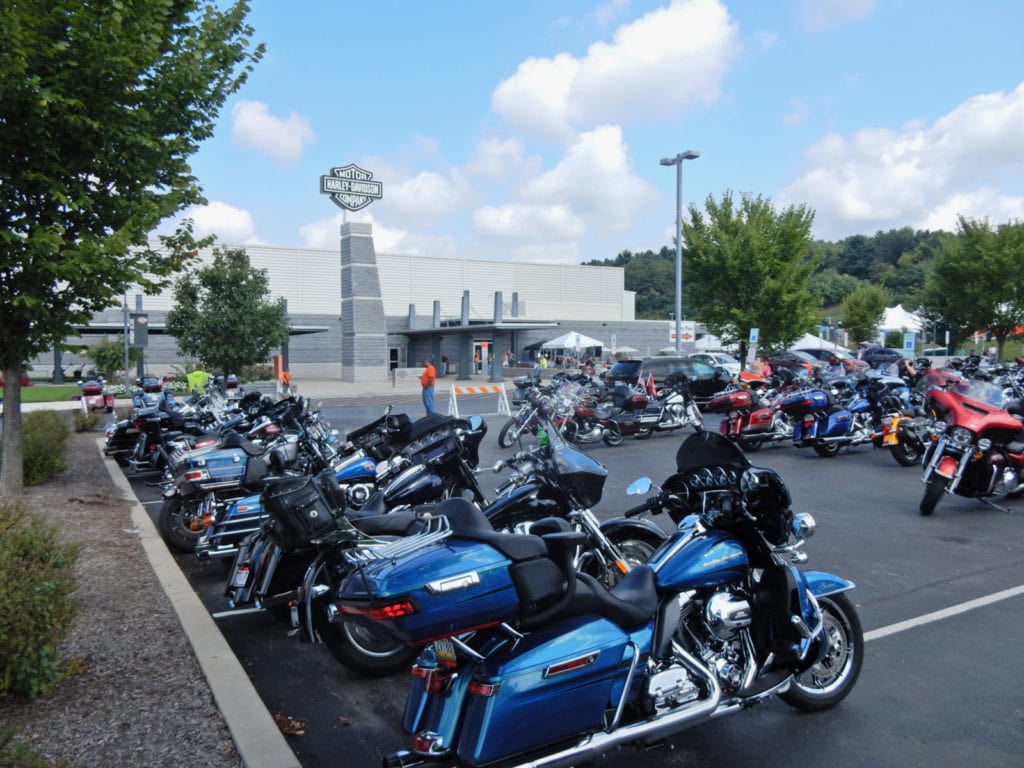 WHY GO: Most folks visit York PA to tour the Harley Davidson Manufacturing Plant. Others come to see  impressive historical structures still standing since Colonial times, or even for a beautifully revitalized downtown with a Central Market that serves as forum for terrific ethnic eateries.

The Getaway Mavens were drawn by York County  claim to fame “The Snack Food Capital of the USA” (see our first travel post.) But this time, the Getaway Mavens delve into the reasons that most people come to York, with our own twist. Find out about other quirky museums and sites, not to mention a growing locally sourced culinary scene. Read on….

Things to Do in York PA

Even if you’re not into motorcycles, it’s thrilling to witness large-scale robots working in concert with humans to create distinctive icons of the American road. A free one hour self-guided tour through the buzzing, beeping factory gets you up close to literal fender-benders, welders, self-driving AGC’s (Automatically Guided Carts), and assembly stations where, piece by piece, each bike is formed into a recognized whole.

Stroll past 10,000 lb. cylinders of cold-rolled steel. Stop to watch sheets of said steel pressure cooked into “half-shells” via the force of 500-ton molding machines. And then see the shells welded together by both humans and robots to form gas tanks.

Next up, the ever-moving Frame Paint line – where all frames are painted black and baked to a glossy shine.

You’ll start to see more human workers in the Assembly area of the factory, where the whole operation takes on a Disneyesque quality as AGC’s, conveying assembled parts from station to station, roll all around you. Every part is color coded and numbered. The whole operation is organized and pristine. No big surprise that each employee exudes great pride in his or her product.

Perhaps the most coveted job is that of the dozen or so examiners who have 4 minutes to test – on rollers in small bays – each of the roughly 800 Harleys that leave the plant each day. To prove that robots haven’t taken over factories completely, humans can override computer analytics when it comes to authorizing the final product.

Naturally, you’ll exit through the gift shop. You can purchase every Harley Davidson stamped product imaginable. One-hour factory tours are free. It costs $38 for the 2-hour “Steel Toe” tour, which gives you a behind the scenes look. But you must RSVP way in advance as it often sells out. Be aware that photography is not allowed anywhere inside the plant. Open 8-5, Mon-Fri. all year.

The YCHC consists of five museums, and a library/archive. A $15 ticket enables you to visit the Colonial Complex, the Agricultural & Industrial Museum, the Historical Society Museum, the Bonham House, and the 1903 Fire Museum of York County.

Begin at the Colonial Complex, which includes The 1741 Golden Plough Tavern, the adjoining 1755 General Horatio Gates House, and the 1812 Barnett Bobb Log House, which was moved here in the 1960’s. The Tavern belonged to a family of German heritage who lived and worked here.

A “half-timber framework,” the Golden Plough is a rare, intact example of this architectural style. You’ll see evidence of this construction through Lucite-covered cutaways in one original wall packed with twigs and mud for insulation.

On the first floor, the tavern room was as close as it got to network news, as travelers would eat, drink, and share gossip of the day. Upstairs, travelers snored together on paper thin floor mats in a common sleeping room. Not exactly the Ritz.

The General Gates House is a step up in status. A Commander of US Troops in the Revolutionary War, General Horatio Gates lived here temporarily, and the home is decorated as if he’ll walk through the door any minute. A table is set with imported dinnerware and an expensive beeswax candle (in the shape of a beehive), indicating the upper class standing of the home’s owners.

Cross the street (watching out for freight-trains that very occasionally ride on tracks embedded in the road) to the 1976 replica of the Colonial era Courthouse, (the original was demolished in 1841), accurate to size and location.

It was here, in November 1777, that the Second Continental Congress met to adopt the Articles of Confederation in an effort to unite the 13 colonies. The Articles served as the Law of the Land until the US Constitution was ratified in 1788. $15 for all sites. Open April – Nov. Tues – Sat, check website for times.

Located in a repurposed factory complex, this museum is built to impress. Large scale printing presses manufactured by George F. Motter’s Sons, overhead crane rails, a 1916 trolley car from downtown York, a working gristmill water wheel, and artifacts from many York factories can all be found in this massive institution.

It’s a wonderland for both kids and adults.

Look for the photo and model of the first turbine windmill, built in 1941 by S. Morgan Smith Co – a hydroelectric dam blade manufacturer. Installed as a test product for a Central Vermont utility, it quickly failed when the blade snapped off.

There’s an early Linotype Machine – a complex contraption used to print newspapers. And a large industrial center phone system, complete with hands on rotary phones, that has become a big hit with kids who have never seen such things. Of course there are exhibits on local notables. Stauffer Biscuit Co. – maker of Animal Crackers (yes, those toddler favorites are still made in York PA), York Barbells, and artists-created York Wallpaper, are all manufactured here.

The Hall of Giants packs a big punch, so don’t miss this soaring space on the other side of the lobby. In it, there’s a humongous, partially working A-Frame ammonia compressor, built in 1904 to make ice for a meatpacking plant, before the advent of Freon. My favorite, though, is the sky-high Reddy Kilowatt; the iconic advertisement for home electricity in the 1930’s. Open Tues-Sat. 10-4.

York Oil Burner Company founder, Bob Hoffman, opened an Athletic Club for his workers in the 1930’s. He found that the gym equipment used, mostly the barbells, were a hot commodity. So, Hoffman decided to expand his business into making and selling them.

York Barbells became his primary business. Hoffman, considered the “Father of World Weightlifting” – which includes both power lifting (as pertains to weight) and body-building (sculpting the muscles) –  started a trend that was popularized by Arnold Schwarzenegger in the 1970’s and still continues to this day.

Anyone who is at all interested in either of these sports will find much to enjoy here, from the display of exceptional physiques that were part of the theatrics of 1800’s showmen, to photos and stats of male and female Olympic World Weightlifting Champions throughout the years. You can try out equipment in a couple of large gyms on site, and then make purchases in the store at favorable prices. Open Mon-Sat 9-4:30, Fridays open until 6, free.

I had to go, given the name of this park, if only for the charms it actually possesses. Nixon never lived in York, and never visited here, but York Barbell owner, Bob Hoffman, was a huge Nixon fan. He donated the Park to the fine people of this county on the eve of Presidential election, in Nixon’s honor.

There’s a big portrait of the former President in the reception area. And you’ll also find helpful docents who provide an overview of the multi-faceted 187-acre park, with six miles of trails and a cool Nature Center.

The Nature Center is far better than I expected. It features both live animals and artful dioramas showcasing a bevy of taxidermied animals from Africa, the Arctic, the Northwest US, and East Coast, along with cases of mounted birds, collections of eggs, and more on two floors.

Bikes are not allowed on the trails – a visit here is meant to be quiet and contemplative. That’s just one of the reasons the place is so popular with “Hike It Baby” groups. Open Tues-Sat. 8:30-4:30, Sun 12-4:30, grounds daily dawn to dusk.

Owned by Denise Mathias and her brother, Bill, this super-small batch, artisanal distillery serves specialized cocktails made with its very own hooch. With the bar and tasting area aglow in blue light, and mixologists pouring drinks at a funky bar, Old Republic could be a hot spot in a much larger city.

But here we are in York PA. And this where the excellent Battlefield Vodka (using non-GMO white corn), Blackberry Battlefield (80 proof), Golden Plough Tavern Rum (100 proof, great for Dark and Stormy’s), Love Potion Moonshine (great with lemonade for “Lovenade”), Apple Pie Moonshine (like drinking apple pie, including the crust), and Blueberry Apple Pie Moonshine – is made.

Next door to Central Market, it’s easy to find this purveyor of smell-good soaps, bath fizzies, and other natural body care products. You can even custom blend your own!

The 21 mile, 176-acre linear bike and hiking trail runs from the Mason-Dixon line to York PA.

Where to Eat and Stay in York PA

This “kitchen,” features a modern take on country breakfast, and it’s oh so kitsch, and oh so fun. A sign at the door playfully demands that you “Have a gosh-darn seat already!”

Throw your cholesterol cautions to the wind and order one of the specials: The Garbage Biscuit – smoked pulled pork, bacon, sausage, gravy, hash browns, apricot butter, and scratch biscuit, or Roost Special with Fried Chicken and Sausage.

Other options include Huevos Rancheros, all kinds of omelets, and more. Tables are made from old doors topped with glass. Bird prints and a mixed bag of wallpaper blanket the walls. It’s a joyful way to start your day.

In the mid-1800’s, York farmers loaded up their carts and sold their goods outside in the town square, because, well, there were no grocery stores around.

The carts turned into shacks. And, over time, these shacks became a town nuisance. So, in 1888, a benefactor funded this beautiful structure that provided a weatherproof enclosure for these farmers and their customers.

A hundred thirty years later, York’s Central Market includes a great mix of nearly 70 restaurants, farm stands, butchers, and artisans. You can shop for fresh ingredients and also take your pick of world cuisine for a quick lunch.

Owners Tony (man) and Toni (woman) Calderone are so serious about good Italian food, they took their kitchen staff to Italy for a couple of weeks to bone up on their Italian mama chops. Reinvigorated, they returned to this old refurbished brick-walled, candle-lit space, with its stunning modern-meets-wine-cellar interior, to cook for local and visiting patrons. Plates of stuffed Squash Blossoms ($10), Chicken Gemelli ($21), Atlantic Cod ($31), and more evoke memories of long ago, authentic Italian meals.

Just a 20 minute drive from downtown York, the farm-fresh food here is good and straightforward – Soups, Salads, Cobb ($18), Brick Fired Pizzas ($12-$18), Pasta Prima Vera ($12), Burgers ($11-$16). However,  it’s the landscape outside that wows. No wonder brides to be insist on having their weddings here. Undulating lawns, verdant hills as backdrop: this Craft Brewery/Restaurant/Wedding Venue is spectacular.

When your ice-cream comes straight from the cow, it couldn’t get any fresher. But that’s not the only appeal of this popular York dairy farm. You can take a self-guided tour to watch cows being milked, learn the dairy process, and even pet some baby calves.

Upscale hotels are few and far between in this neck of the woods. But Heritage Hills is fine, comfortable and updated with great bedding, granite bathroom, and nice amenities. It’s a good choice for those who want a touch of resort-standard while avoiding a chain brand.

Do you love to golf?  Bring your clubs and hit some balls right outside your window. Heritage Hills is a popular driving range and a resident 18-hole course. Come in winter, and the driving range turns into a snow-tubing hill.  Greens fees $33-$74.  Hotel rates $180-$260. 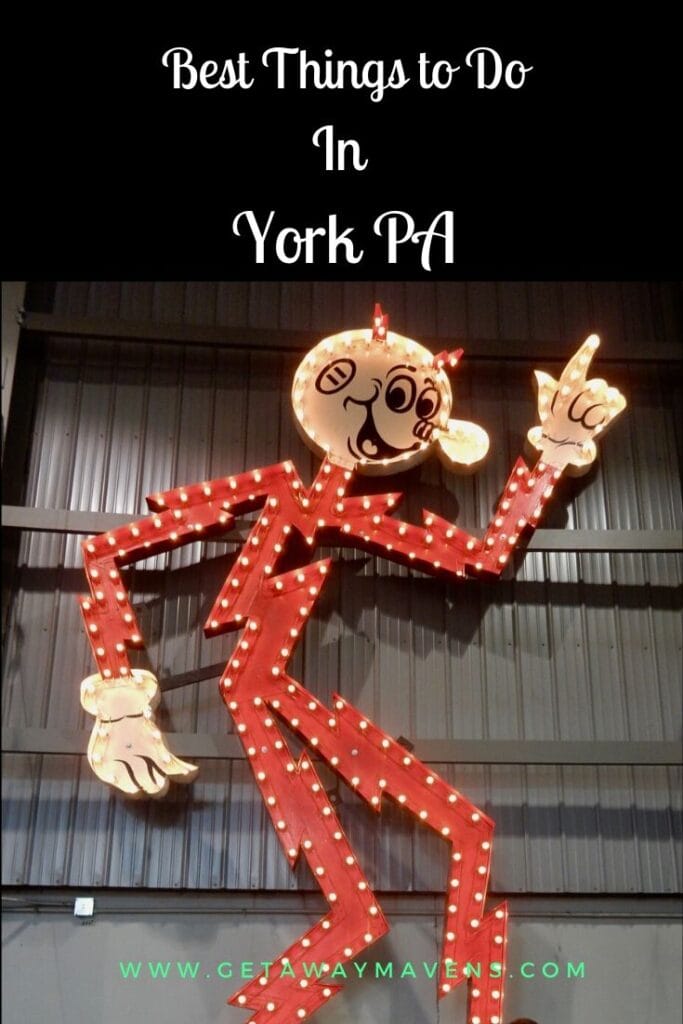