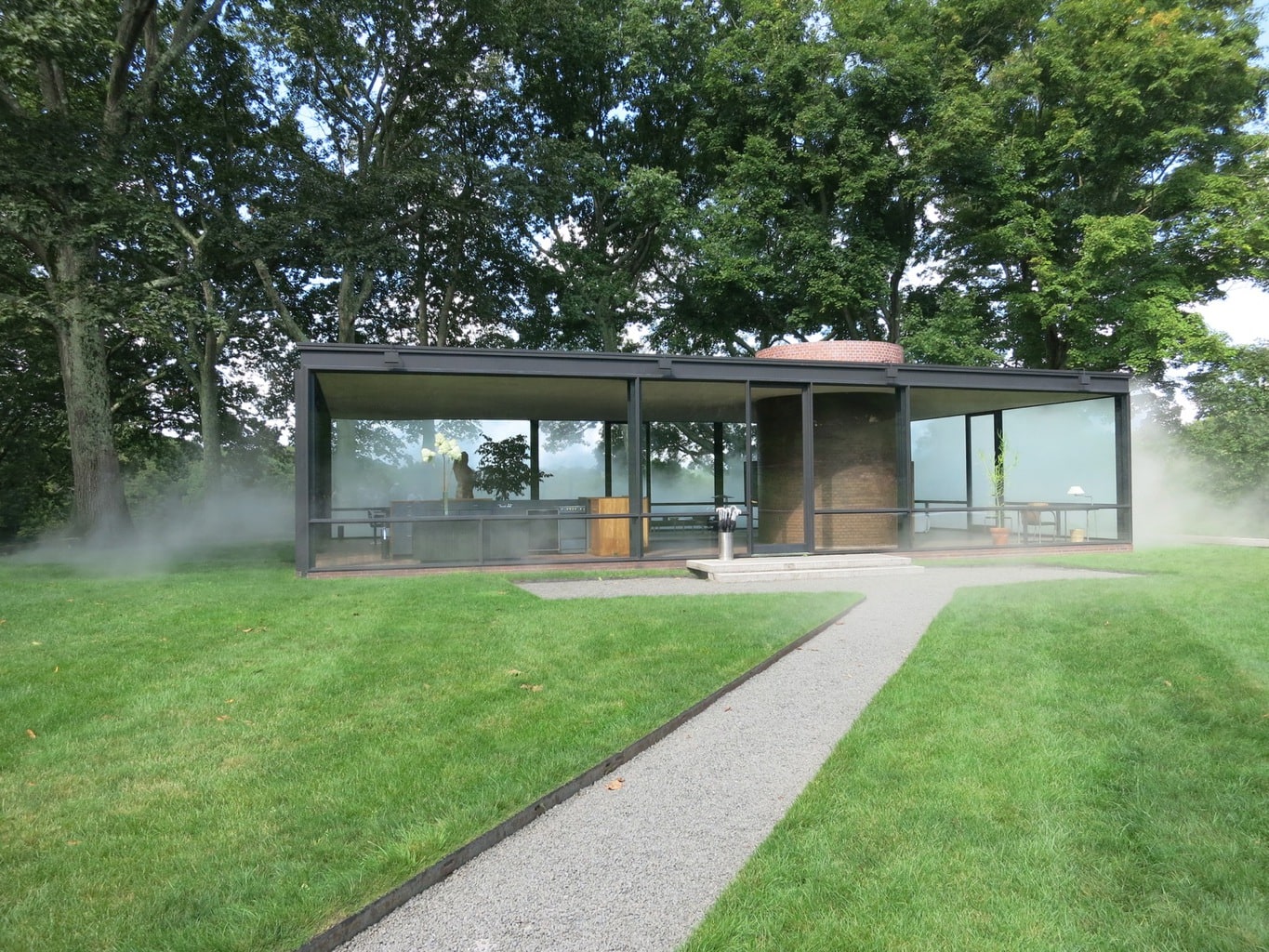 WHY GO: New Canaan CT, an hour commute by train into Manhattan, was the quintessential John Cheever-esque suburb, pioneered first by farmers, and then by strivers, achievers, and, surprisingly, a futuristic, visionary type of architect.

Though Philip Johnson, designer of The Glass House, is the most famous, he was just one of The Harvard Five: architects and instructors from the Harvard Graduate School of Design who settled in New Canaan in the 1940’s. John M. Johansen, Marcel Breuer, Landis Gores, Eliot Noyes and Johnson all made their mid-century-modern mark on this staid ‘burg.

However, only one of these, The Glass House, is open to the public. So, come to New Canaan to delve into the life of a world-renowned architect, walk the 80 natural acres of a new kind of Church, and stay for contemporary cuisine in an antique inn with Revolution-era cred on this offbeat Connecticut Getaway.

Expand your Connecticut visit with a stay in Norwalk CT,  Ridgefield CT, and/or Stamford CT. All are a 10-20 minute drive away. Greenwich CT is about 30 minute drive.

Things to Do in New Canaan CT

After Johnson’s death in 2005 (at the age of 99), fans of this mid-century modern starchitect deliriously awaited the opening of his transparent home and property. Guided tours sold out fast, at $100 a pop, when first offered to the public in 2007.

Even now, because only 13 people are allowed at a time, a visit to Johnson’s inner sanctum might prove to be a tough ticket. So book far ahead.

Expect to walk a lot on uneven surfaces on your 2 ½ hour tour. Of course the Glass House is the star of Johnson’s 49 acre property. But your narrated amble will include at least three other outbuildings. Begin in town for a short orientation at the Visitor’s Center. From there a van transports you to Johnson’s property on Ponus Ridge Rd.

The kitchen, bedroom, and living areas are open to the elements. The surrounding forest and undulating lawnscapes seen through glass walls are nearly indistinguishable from the interior. Thankfully, the green-mosaic-tiled bathroom is enclosed for privacy.

The Brick House was designed at the same time as the Glass House. The polar opposite of the Glass House, the Brick House features just a few porthole-shaped windows in the rear of its seemingly impenetrable rustic brick exterior. In his later years, Johnson moved into this more private abode.

Other structures on the property vary in form and function. Johnson used them as guest homes, studios, galleries, and physical plants. One, the Ghost House, appears like a mirage in the woods.

The solarium-bright Sculpture Gallery is meant to invoke the whitewashed hillsides of the Greek Islands, with staircases that mimic random narrow streets of Santorini.

Johnson called the bunker-like Painting Gallery a “Berm House,” because it was built into a manmade mound of dirt. The gallery is accessed through an entrance that could just as well lead into a bomb shelter.

One of Johnson’s last installments, built in 1995, “Da Monsta” is a fractured, deconstructed, Frank Gehry-like red and black space, so named because Johnson felt it had the qualities of a living thing. Tours from $25 for a one hour “concise” tour of the Glass House only to $120 3 hour tour. RSVP required.

Before Grace Farms opened in 2015, there was much speculation about how this Christian Church/Nature Preserve/Arts Center/Gathering Spot would be integrated into a wealthy, private, rural-suburban community.

Over two years later, skepticism has turned to acceptance, as there appears to be no proselytizing. In fact, Grace Farms has fostered interfaith understanding, with programs like the annual Interfaith Passover Seder.

According to the website, “Grace Farms is a welcoming new place, where a building designed by SANAA is seamlessly integrated into 80 acres of open space for people to experience nature, encounter the arts, pursue justice, foster community, and explore faith. A diverse natural habitat in the northeast corner of New Canaan, Connecticut, this former horse farm is home to numerous varieties of flora and fauna. Approximately 77 of the 80 acres will be retained in perpetuity as open meadows, woods, wetlands, and ponds.”

Grace Farms is a very special place, hewing to its five core initiatives – nature, arts, justice, community, and faith – with utmost respect towards others. It’s worth visiting no matter what your faith. Free to visit, Tues-Sat 10-6, Sun 12-6. To expedite entry, register for a free Grace Farms Pass at the West Barn Welcome Center.

Where to Eat and Stay in New Canaan CT

Ask locals if they’ve dined at the Rodger Sherman Inn, and they’ll say, “not in 30 years.” By the 2000’s, this Connecticut landmark had seen much better days. But in November 2017, things changed for the better when prominent chef, Francois Kwaku-Dongo, formerly Executive Chef at Spago in California and L’Escale in Greenwich CT took the helm.

The Roger Sherman Inn was named for the Founding Father who helped draft the Declaration of Independence. Though Sherman never lived in New Canaan, you’ll encounter echoes of our country’s revolution within its walls.

Check out a couple of paintings on the restaurant walls. In the mid-1800’s, famous wallpaper artist Jean Zuber depicted two Revolutionary War era scenes. More symbolic than true-to-life, they were wildly inaccurate. One, for example, shows the Surrendering of Cornwallis at West Point NY, when in fact the surrender took place in Yorktown VA.

Interspersed throughout a rambling 18th and 19th century building, Roger Sherman Inn’s 17  rooms have been recently renovated. The inn faced the wrecking ball in 2016, and then the community saved it. Thank goodness it did. Rooms from $155 per night. 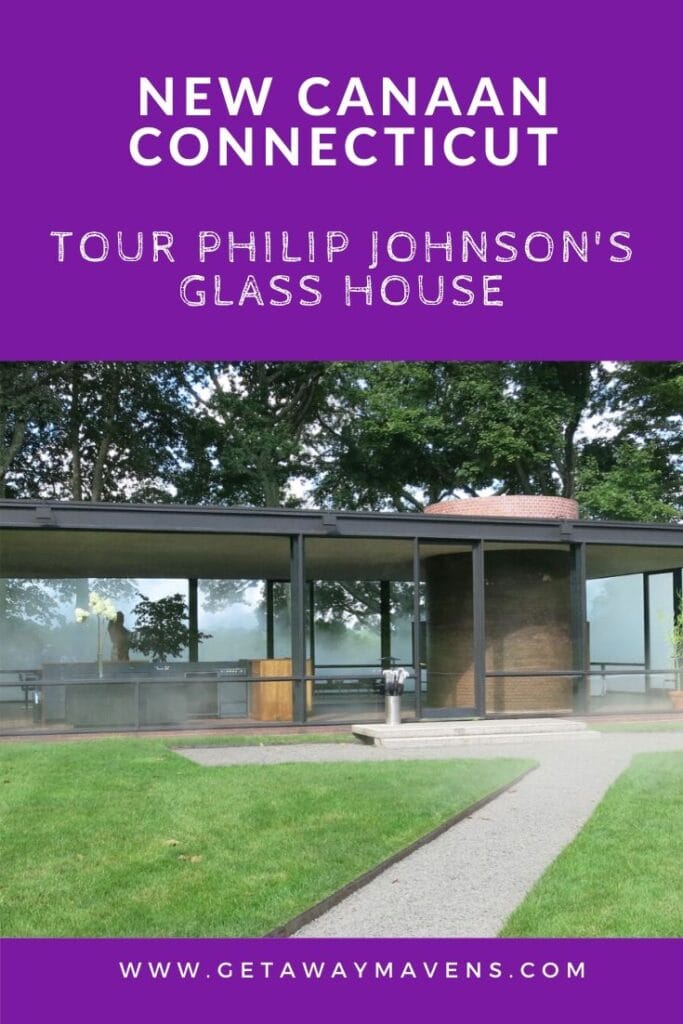