Home » Northeast » Connecticut » Stamford CT: The City That Works as a Great Getaway 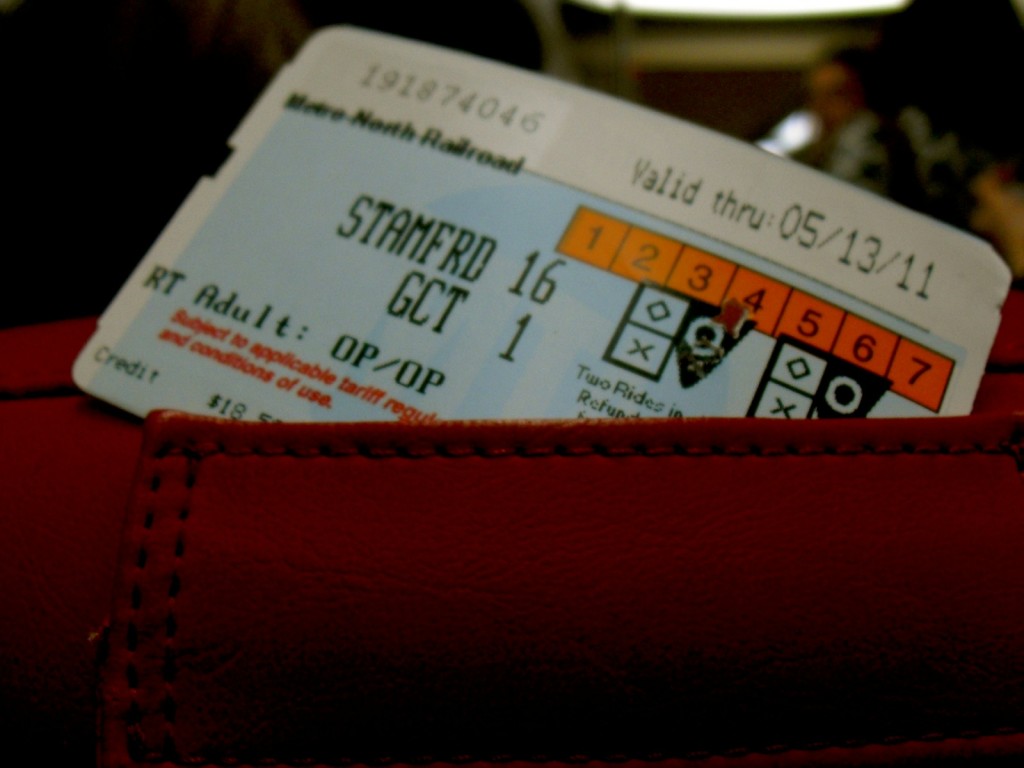 WHY GO: Worker-bee commuters swarm daily into Connecticut’s 2nd largest city (after Bridgeport), just 50 minutes by Metro North train from Manhattan. But there is another side to Stamford – which happens to be this Maven’s home. One that has less to do with profits and more with fun. And sometimes weirdness.

Stamford has a church in the shape of a fish, one of the only Ukrainian Museums in the country, World Wrestling Entertainment (WWE), and a surprisingly vibrant nightlife. (And, formerly, Jerry Springer). It’s vibrant enough to bring New York City dwellers out to the burb’s.

These contradictions are what make Stamford so intriguing as an Offbeat Getaway. That and the fact that the culinary scene is so darn diverse. Of course I’ll let you in on my favorite haunts.

Things To Do In Stamford CT

Now, more than ever, it’s important to learn about Ukrainian culture. As I write this, the Russian-Ukraine War is escalating. Putin continues to bomb this Slavic country into oblivion, and with it, the human and brick and mortar repositories of its rich past.

I’ve lived in Stamford CT for much of my life and didn’t know this Ukrainian Museum existed. That changed a few days ago, after I spied a small ad in our local paper. Imagine my surprise when I discovered that, along with the attached Ukrainian Catholic Seminary, it’s been open since 1937.

In 1933, Bishop Constantine Bohachevsky purchased the stunning mansion, built by coal magnate Edward Quintard in 1860, for $50,000. Established as a Cultural Center for Ukrainian immigrants throughout the U.S., the museum was incorporated in 2000 in Connecticut as a non-profit Educational Center as well, with nearly 75,000 Ukrainian language books in the Library, housed in another historic building.

These 7,000 folk artifacts and roughly 3,000 paintings and sculptures are on artful display thanks to curator, Lubow Wolynetz, who started out teaching at the Seminary, and 40 years later has overseen the museum’s growth from two rooms to two floors.

During the hour I spent here, two pieces caught my eye. One of these made me tear up.

I admired the handiwork that went into a bedspread made from the embroidered sleeves of women’s blouses. But, I got really emotional while studying a 1963 painting of “Snowy Kyiv.” It’s an idyllic scene: snowcapped churches, kids bundled up, sleighs and trolleys on the move. I stood there mourning for a peaceful Kyiv, not the battlefront city it is now.

While in Stamford, make it a point to learn about Ukraine. During open hours, ring the doorbell and someone will open the heavy original 1860 doors. Although now with limited hours, you can always call for an appointment. Open Tues, Wed. Thur. 1-5, or Sat by appointment, $5 suggested donation. 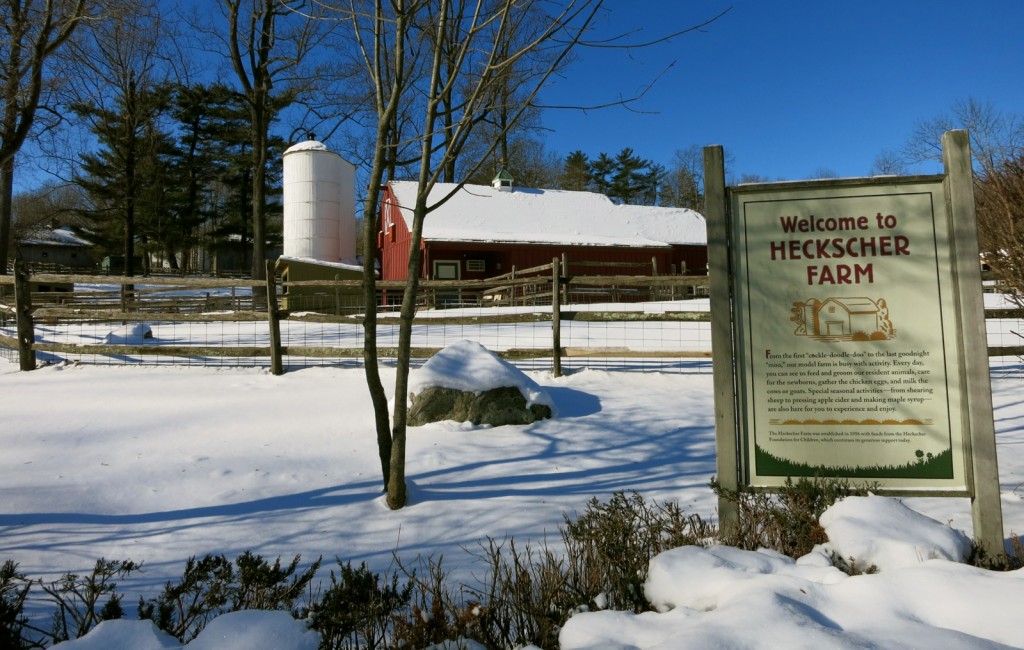 This treasure of a local attraction is worth a morning or afternoon. If only to engage in meaningful eye contact with two acrobatic otters that implore you to stay in their homey enclosure.  “Don’t leave us,” their antics beseech.

But you must, in order to see all there is to see in this complex that includes an art museum lodged within the former country home of retail mogul Heni Bendel.

The “heritage breed” farm houses a corps of barnyard animals from bygone days, including a dozen breeds of chickens, pigs, sheep and bovines. Here, nature trails feature sculptures and wildlife. A “Nature’s Playground” allows kids (and kids at heart) to sprawl out in an “hawk’s nest.” And there’s an observatory with a 22 inch telescope open to the public most Friday nights. 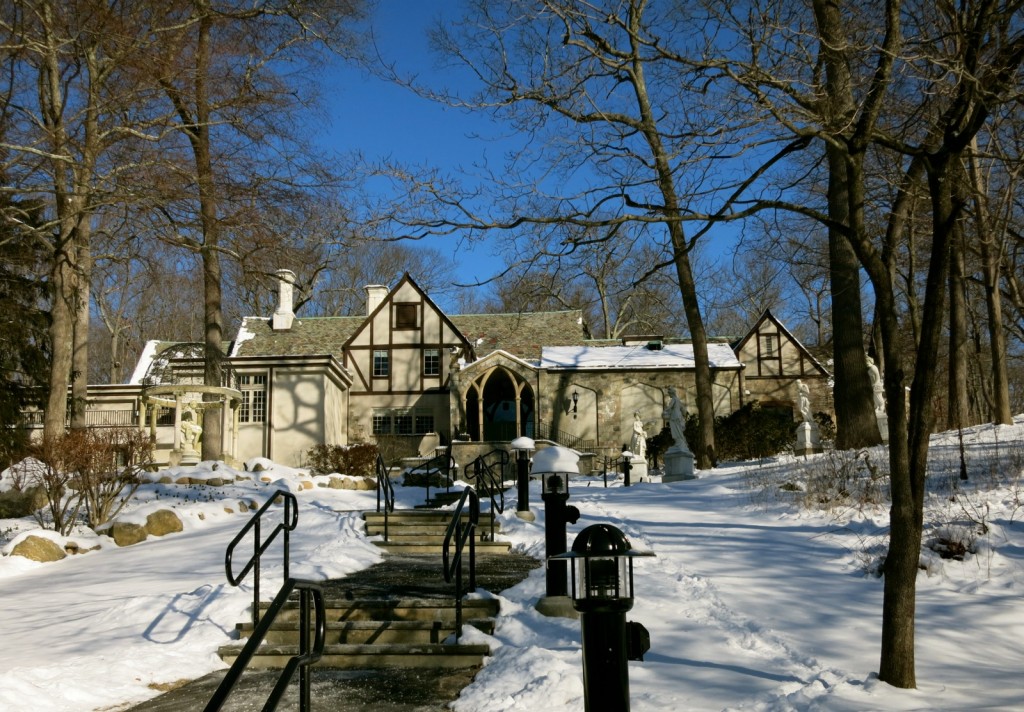 Trails throughout the 93-acre tree sanctuary lead past lawns, woodlands and brooks. Just be aware that they can be pretty rooty and rocky – so wear appropriate footwear.

If exotic species of plants and trees are your thing, an afternoon here offers pure bliss. Visitors discover the exceptional beauty of the property’s habitats, trails, gardens, majestic trees and plant collections, including a new Sensory Garden. Oh, and wildlife.

On my latest visit in mid-November, I interrupted a young antlered deer foraging in the woods. He jumped in surprise just a few feet from me.  You can also take part in classes and events online and in person. Check website for info. Open daily from 9am until sunset, $5 donation. 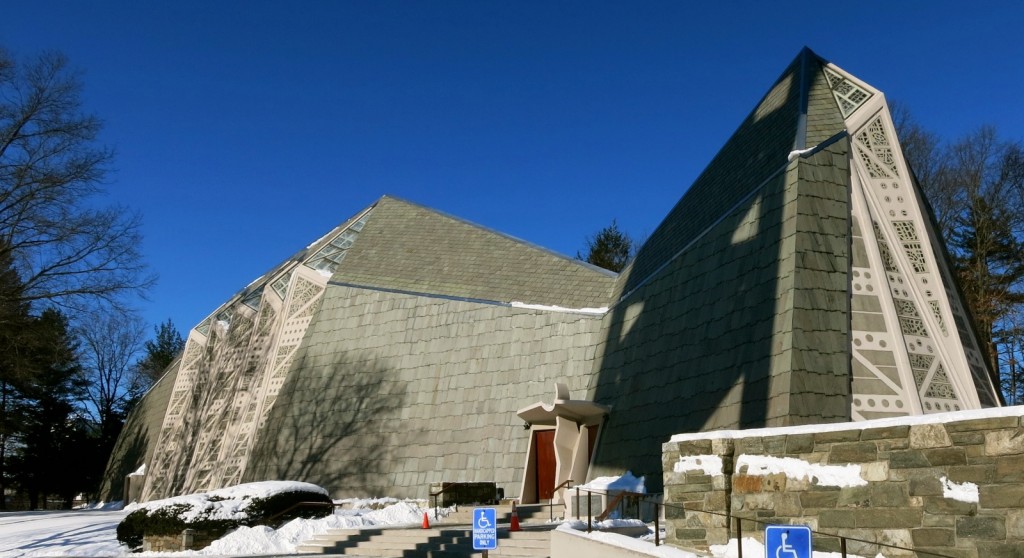 It’s immediately obvious that this church was built in the shape of a fish. This out of the ordinary design is what most people see when they pass by on busy Bedford Street.  But step inside and you are suddenly in the center of a massive kaleidoscope.

Designed by Wallace K. Harrison – the architect who led the multinational team that designed the UN Building in New York, and who also had his hand in building Rockefeller Center and Lincoln Center  – this stunning sanctuary opened in 1958. 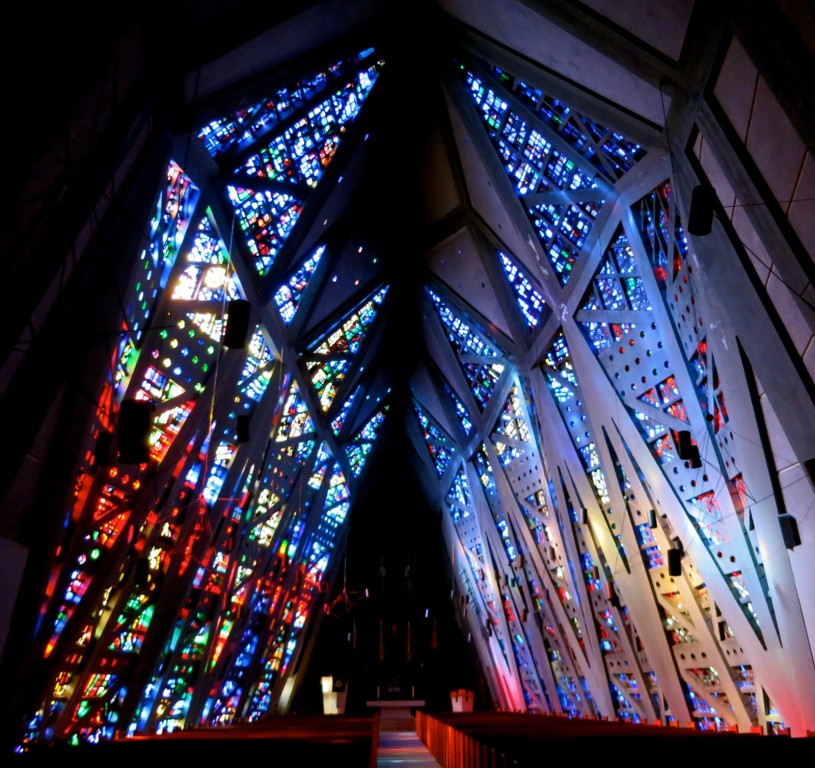 With more than 20,000 individual pieces of faceted stained glass set in concrete, it’s truly like being inside a work of art. Even if you are of another faith, come to hear the thunderous tones of the Visser-Rowland pipe organ, containing over four thousand pipes. The experience is absolutely spine tingling in this magnificent space. Click here to see astonishing aerial and interior views of the Fish Church taken via a drone. Open daily, free.

DO: Sail on The 80 ft. Schooner SoundWaters

From May to November, this floating Long Island Sound classroom offers two-hour public afternoon and sunset sails. Hoist canvass to the rhythm of sea chanteys and watch as lobsters, seastars and jellyfish are brought on deck, studied, and released.

SoundWaters seeks to protect the Long Island Sound through education. When out on the water, you’ll see why. This Atlantic Ocean estuary is one of the most scenic bodies of water on earth. April – Nov, two-hour cruises $30 adults, $15 children 5-12. Check website for schedule. 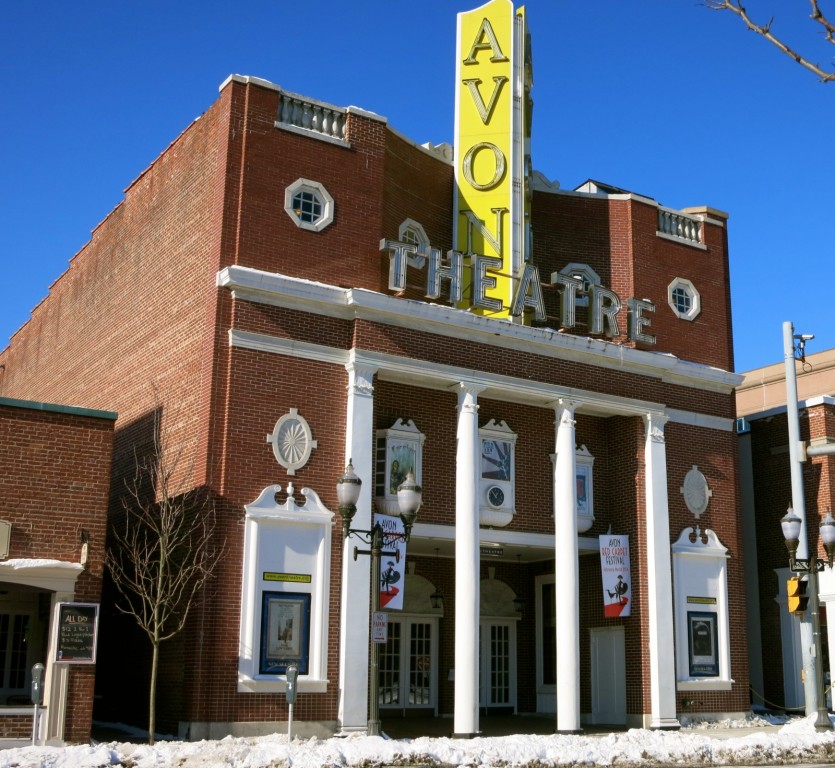 Before his death, resident notable, Gene Wilder, sat on the board of this independent arts movie theater. Every so often he’d participate in a Q&A after one of his “Wilder’s Picks.”

This area of the country, actually, is replete with big and little screen actors who just “vant to be alone.” But some are willing to emerge from seclusion to speak before or after a screening of a movie that he or she has directed or starred in.

Frank Longella discussed “Starting Out in the Evening,” and Charles Grodin told an intimate audience what it was like to work with Robert DiNiro in “Midnight Run.” Though DiNiro hasn’t made an appearance onstage here, he has filmed a couple of movies in Stamford. So, perhaps its just a matter of time.

Park your car once in Stamford and you can get to most attractions and restaurants on the FREE 14-stop Harbor Point Trolley.  This mode of transport is a boon to residents and visitors – bringing you from downtown theaters and eateries (and the great Ferguson Library) to the waterfront. Check it out and ride it just for the kicks! 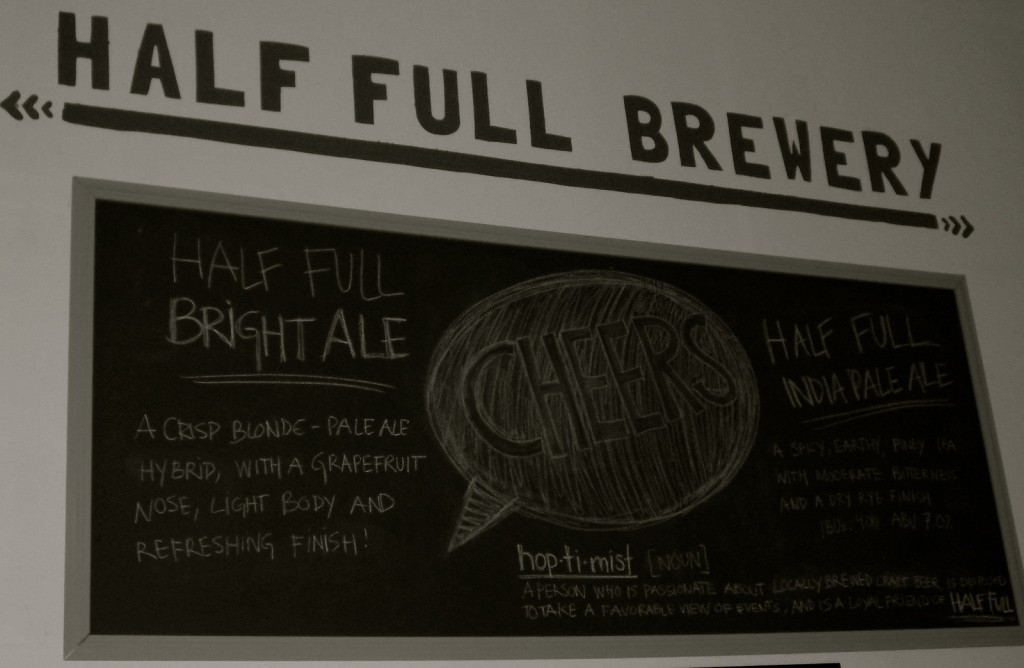 Here’s your chance to visit and sample homegrown, craft brews. Established by young Conor Horrigan, who left his Wall Street job after an epiphany on vacation in Peru, Half Full has been a Stamford sensation since it opened its doors. I’m partial to the creamy Half Full Chocolate Coffee Brown Ale. Open Thus and Fri. 4-9, Sat 12-9, Sun 12-5 for tastings, tours 2 and 4 Sat/Sun.

This nano-brewery normally would swarm with beer lovers on summer nights. Though Covid put the kibosh on that, you can still pick up a growler of the popular stuff when open. Check website for details.

These days, when everyone seems to be opening a “make-your-own” cafeteria-style eatery, Roasted stands out for its full bar (novel in the fast slow-food space) and a variety of meats slow-roasted by owner Bill Hall. Bill starts roasting the turkey breast, pork, and beef at the “time-to-make-the-donuts” hour of 4:30am. Each and every day.

Bill’s wife, Kristin, with a Masters in Neuroscience, brings her love of the scientific method to their restaurant. Diners “Build” their meals by choosing a “Bottom” – either rolls or salad/grain bowls; a “Middle” – from a roster of roasted meats including Italian herbed pork loin, jerked chicken, chile sugar brisket, and now roasted salmon (my personal favorite). And, for the vegan in your life – BBQ Tofu. For the “Top,” choose from dressings and foodstuffs that have been life-lab tested for perfectly balanced combinations of textures and flavors.

This Ethiopian grain has been called a “superfood,” “the new quinoa” and so many other superlatives, you’ll feel healthy just dining on the spongy teff-based bread (injera) alone. But this bread is merely the delivery device for excellent stews and warm salads – hallmarks of Ethiopian food.

Vegans will adore all the vegetarian offerings, which make great use of beans, greens and other veggies ($17 includes four small portions and two injera). Meat lovers won’t feel left out either. Tasty chicken, beef and lamb is on offer ($23 for spiced lamb cubes and two vegan dishes). As you might be able to tell, I’m one of Teff’s biggest fans. 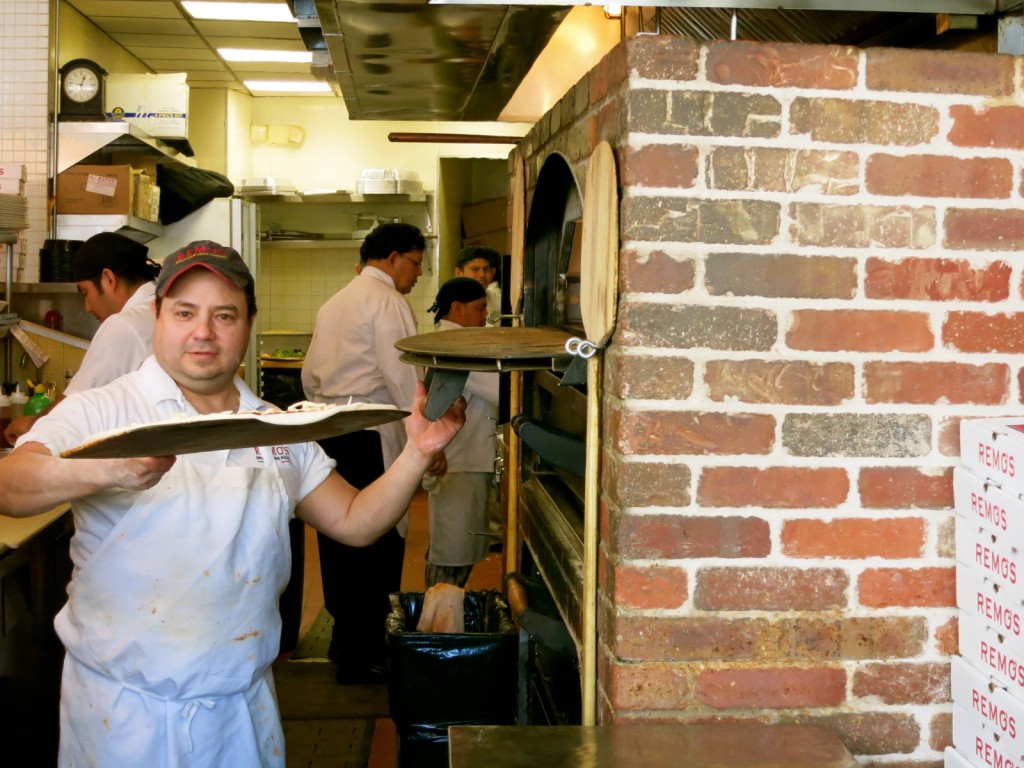 It’s not fancy or (thankfully) pricey, but Remo’s was purported to be one of Bobby DiNiro’s favorite hangouts while filming in town. And it’s my favorite “neighborhood” brick oven pizza joint.  Of course the pizza’s great, but I’m partial to Remo’s Chicken Balsamic – a mélange of boneless chicken breast, sliced portabella mushrooms, and sun-dried tomatoes over penne pasta, tossed with a balsamic glaze I apparently can’t resist ($17.95). All fish, chicken and veal entrees hover around $20, a bargain in this Gold Coast city. 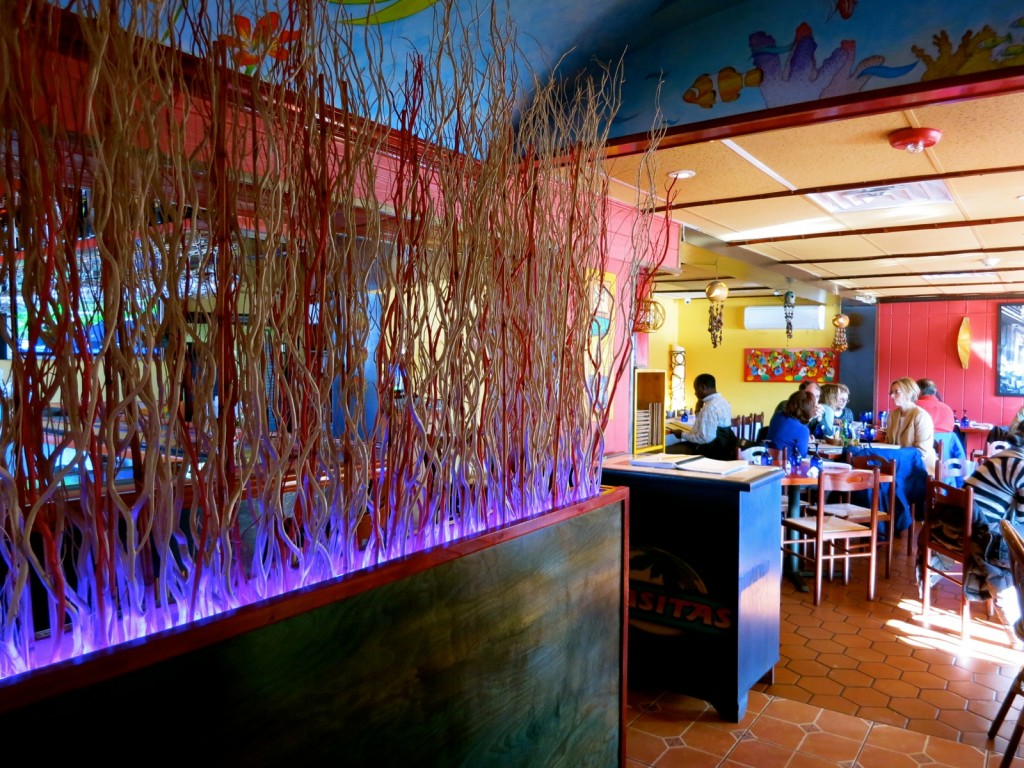 This tiny Latin Fusion restaurant used to be that hidden, aesthetically pleasing hole in the wall that no-one outside of Stamford knew about but where we all took our out-of-town friends. On busy Route 1 near car parts stores, you could park on a side street and just walk in.

Those days are gone. And though the food remains incredible, you’ve got to call days in advance for a reservation. And then hand your car keys over to a valet when you arrive. I still take my out of town friends there, and meet other in-town Brasitas loving friends just so I can get my Carne Asada fix: pan roasted Black Angus hanger steak with smoky chili emulsion ($25).

STAY: The Lloyd (Tapestry By Hilton)

The old Zero Degrees Hotel is now The Lloyd, and still the only groovy boutique in Stamford, CT. And, yay, it’s pet-friendly! This hotel is so cool and inviting, you might not notice that it sits on a busy road. The lobby, decked out in soothing woodland colors, West Elm furniture, contemporary art, and a gas fireplace, makes you almost forget you’re in a rather large (for Connecticut) city.

All 94 rooms are outfitted with all the elements of a true boutique; tufted leather headboards, duvet clad beds, one deeply hued wall for punch, Porcelanosa bathroom tiles, and locally sourced art. Huge (50″) flat screen TV’s and free wi-fi round out the great, comfy deal. Rates from $159 include, wi-fi, state of art fitness center.

6 thoughts on “Stamford CT: The City That Works as a Great Getaway”