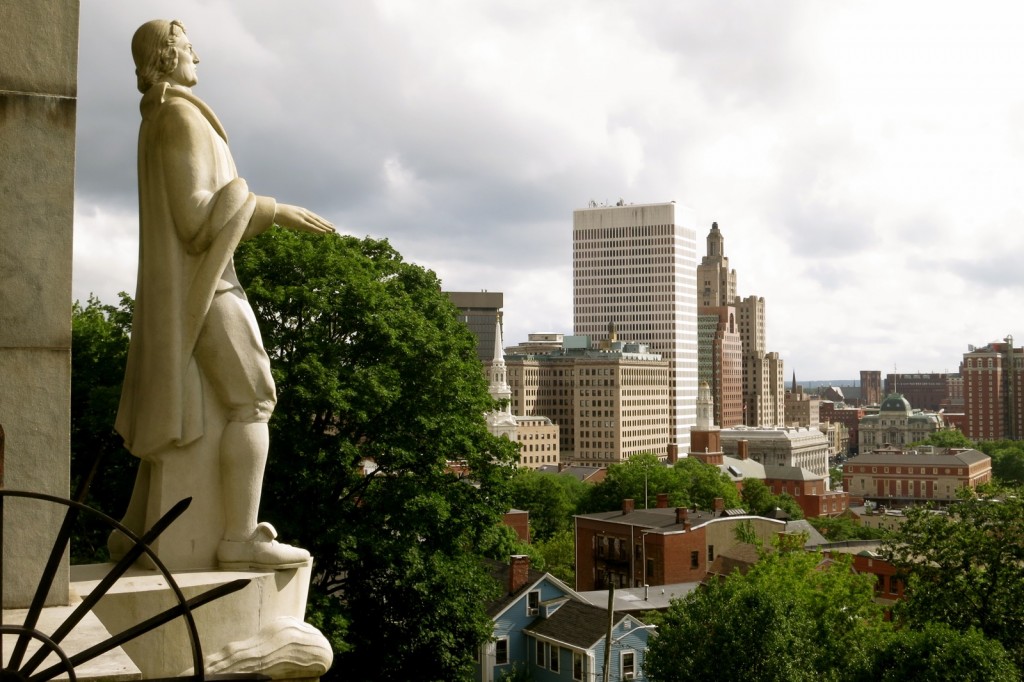 WHY GO: Once called the “Beehive of Industry” Providence, RI on the Narragansett Bay, fell hard during the Great Depression only to be hit even harder by a devastating 1938 Hurricane.

Deep in decline by the 1970s, city officials decided to take action. They uncovered downtown rivers that were buried beneath roads and embraced a passionate artistic community spirit. It’s an ongoing renaissance in the first state of the union that supported religious tolerance, thanks to Roger Williams.

Things To Do In Providence RI

One of the most unique tours of Providence’s urban waterways is via a 28-foot pontoon boat on the Providence River. Boats run daily from Waterplace Park through the Hurricane Barrier into Providence Harbor.

Captain Tom McGinn expounds on the history of the Providence waterfront, or lets you enjoy silently (your choice). It’s as close to Venice as you’re going to get in New England.  $24 per person. Select “Waterfire” tours, $40pp, take you within arms reach of 80 river bonfires – a very special perspective. Contact online for reservations.

An alternate, more romantic way to experience Providence-as-Venice is via your own Gondola. Depending on the package, your gondolier will sing to you as you nibble biscotti and sip Italian wines. From $89 to $179 per couple for 40 minutes. Note that WaterFire trips are not available for online booking. Call ahead to book at 401-421-8877.

One of Providence’s most thrilling art projects is the annual WaterFire Festival which sees over 80 braziers blazing, accompanied by a music program, along the riverwalk on select nights in June-November.

But in anticipation of the 25th Anniversary in 2020, even more, events are planned under the #Art4Impact Umbrella. Live performers and an eclectic mix of food vendors add to the festive atmosphere.

Some of the stories on this entertaining nearly two hour walking tour are gross and creepy, but isn’t that part of the fun?

Beginning at the Roger Williams Statue in Prospect Terrace Park (offering spectacular city overviews at sunset), you’ll hear about the fate of Williams remains, and learn about the four categories of ghosts (FYI – Orbs, Apparitions, Poltergeists, and Specters).

From there your guide weaves tales of dorm room hauntings, unexplained deaths and sightings with Providence history.

Find out why a horseshoe impression remains on the stairs of a former Revolutionary War hospital now a university dorm, and who promised to “arise from their graves and mingle” at 4:30pm each evening. 8pm in Summer, 7pm Sept-Nov. every night in season (check calendar), $18 pp.

Roger Williams – born in London in 1603, and trained in the ministry – fled to Boston where he encouraged separation from the National Church.

Cast out of Puritan Massachusetts for his beliefs (Williams founded The First Baptist Church in 1638), he was assisted by Native American tribes in the wilds of what is now Rhode Island, and established a settlement at the head of the Narragansett he called “Providence.”

This was the first British colony that sanctioned freedom of conscience and religion, a philosophy that informed the basis for the First Amendment of the US Constitution over a hundred years later; “Congress shall make no law respecting an establishment of religion, or prohibiting the free exercise thereof.”

See a short movie, and then climb the hill to see his statue and a magnificent view of Providence. Open 9am-4:30pm daily except holidays.  Free.

A climate-controlled pocket museum within the State House tells the story of how this wilderness became a hotbed of religious freedom.

Filled with artifacts and documents leading up to the establishment of Rhode Island as a colony, the piece de resistance is the original Rhode Island 1663 Charter signed by King Charles II himself. Don’t leave the State House without looking up towards the magnificent vibrantly hued dome.

Encircling its interior base is a Latin inscription, dating from first century Rome that translates to “Rare felicity of the times when it is permitted to think what you like and say what you think.” State House open to the public weekdays 8:30-4:30, free.

Built in 1838, and filled floor to ceiling with books rare and pulp, the Athenaeum is a city treasure. Take the self-guided “Raven Tour” (“follow the ravens”) to find stories about Poe, about the building itself and original handwritten cards in the still-functioning card catalog.

The Providence Athenaeum is one of the Getaway Mavens’ quirkiest places to propose in Rhode Island.

Though the college itself is known for forward-thinking design, the RISD art museum looks as far back as antiquity.

You’ll find an Egyptian mummy lying by its sarcophagus, medieval cherub, landscape and religious oils, Greek urns all the way up to Matisse, Cézanne, Warhol, and Koons among 86,000 objects and artifacts. Open Tues – Sun 10am-5pm, $15 adults, 18 and under free.

Westminster St. is experiencing quite the revival with trendy, local craft shops like Craftland, crammed with soaps, jewelry, t-shirts and knitted everything, and Homestyle (“artful objects for life and home”), which won Best of New England 2011.

In the funky Fox Point neighborhood of Providence RI, the Coffee Exchange hits all the buzz words – Fair Trade, Sustainable, Organic – rendering it the hot spot for very a diverse clientele.  Walk in any morning to find the dew of youth chatting with cane-wielding seniors, tattoos and pinstripes, all enjoying that first (or fifth) jolt of caffeine. A buzzing place for sure.

If you love mussels (and even if you don’t), this neighborhood bistro popular with college kids and parents of same is your place. Known for  “Moules & Frits” you can get a plate of seasoned shellfish with a variety of seasonings for just $12.

Don’t like mussels?  Try the “Everything But the Kitchen Sink” salad ($13); a wooden bowl brimming with chopped Romaine, pickled green beans and cauliflower, hearts of palm, feta, chickpeas, hard-boiled eggs and lots more.

In a nondescript building nowhere near the downtown scene, Los Andes needed one thing to get people in the door when it opened years ago. Great food.

Since then, it’s been winning top honors among foodies. And the talented owners, brothers Omar and Cesin Curi, keep ‘em coming back. How? Great food.

Tables are candlelit. Waitstaff, dressed in white button down Oxford shirts and ties, are informed and enthusiastic.

An acronym for “Cocktails, Antiques, Victuals,” CAV, located in a factory building in the former jewelry district, is a delight for the eye and palate.

Contrary to what its name implies, this is not a “hot” club.  It’s name stems from the building that this extremely popular neighborhood joint, hard by the Providence River occupies; the former Steam Room for surrounding factory buildings.

Providence home boys, The Farley Brothers, filmed parts of Something About Mary right on these weathered plank floors. Take a 30 minute Providence River Boat Tour from the Hot Club patio for just $10. You can take your drinks! River tours Wednesdays and Fridays in season @ 6pm. 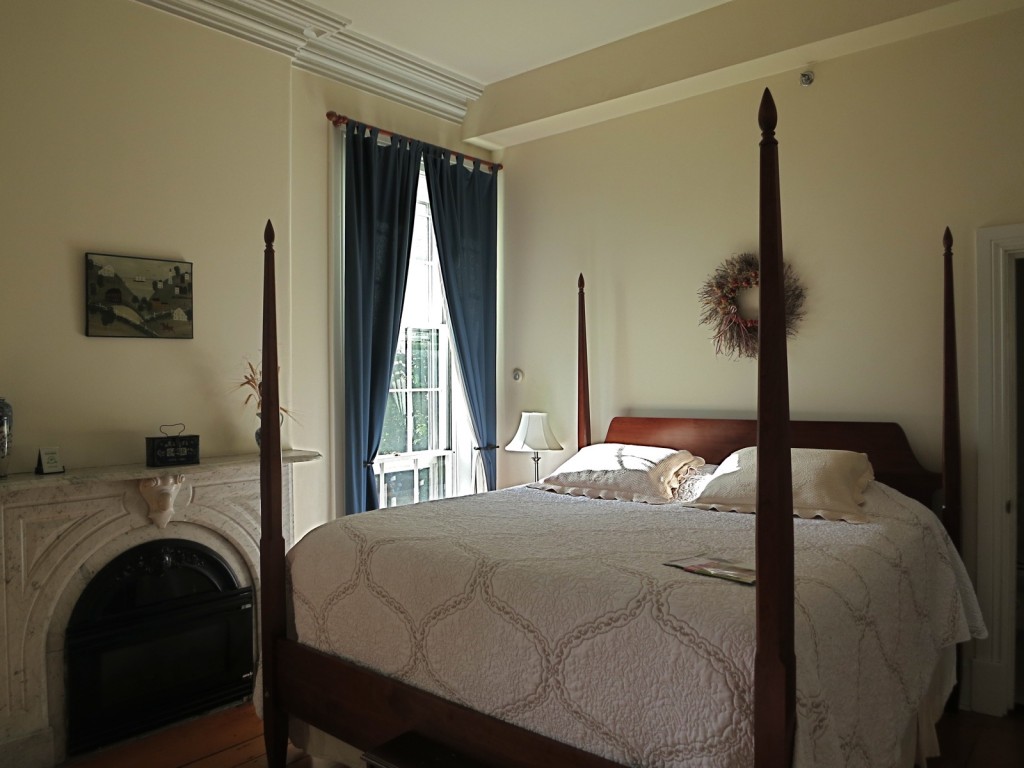 While the highway-side location might give one pause, this 1850’s brick home, completely restored in 2002, is a beautiful and quiet oasis of hospitality.

Stay in a “Prime” room facing away from I-95, and, on your torso-high four-poster bed, you could be at any lovely country B&B. Burnished original wide plank floors, 11 foot ceilings trimmed with elaborate moldings, fresh baked goods and drinks 24/7 and gourmet breakfast, it’s a nice and friendly alternative to larger hotels in town.

Rooms range from standard to luxury (Prime), with prices that reflect the difference.  Bathrooms are clean and fine. While walking in the neighborhood during the day is ok, it’s probably safer to drive downtown at night.

Standard rooms are $129-$149, though the Mavens recommend the “Prime” rooms, $169-$189. All include free wi-fi, free parking, fresh-baked goods in the afternoon, and gourmet multi-course breakfast.