WHY GO: Onancock VA on the southern end of the Delmarva Peninsula, and the working man’s Tangier Island in the Chesapeake Bay have never been on any “hotspot” list. Life in these parts revolves around the water: oysters, crabs, duck-hunting, millions of migratory birds.

Virginia’s Eastern Shore is a mere 5 hours drive from New York City (that’s as long as it takes to get to Lake Placid), and attractions, food and lodging are surprisingly sophisticated.  Where else can you kayak to an award-winning vineyard for a wine and cheese tasting afternoon?

To extend your Getaway, combine with this visit to Chincoteague and this one to Cape Charles VA at the tip of the Delmarva Peninsula.

Onancock is on our list of 20 Surprisingly Romantic Getaways in VA. Check it out if you wish to explore the state further. 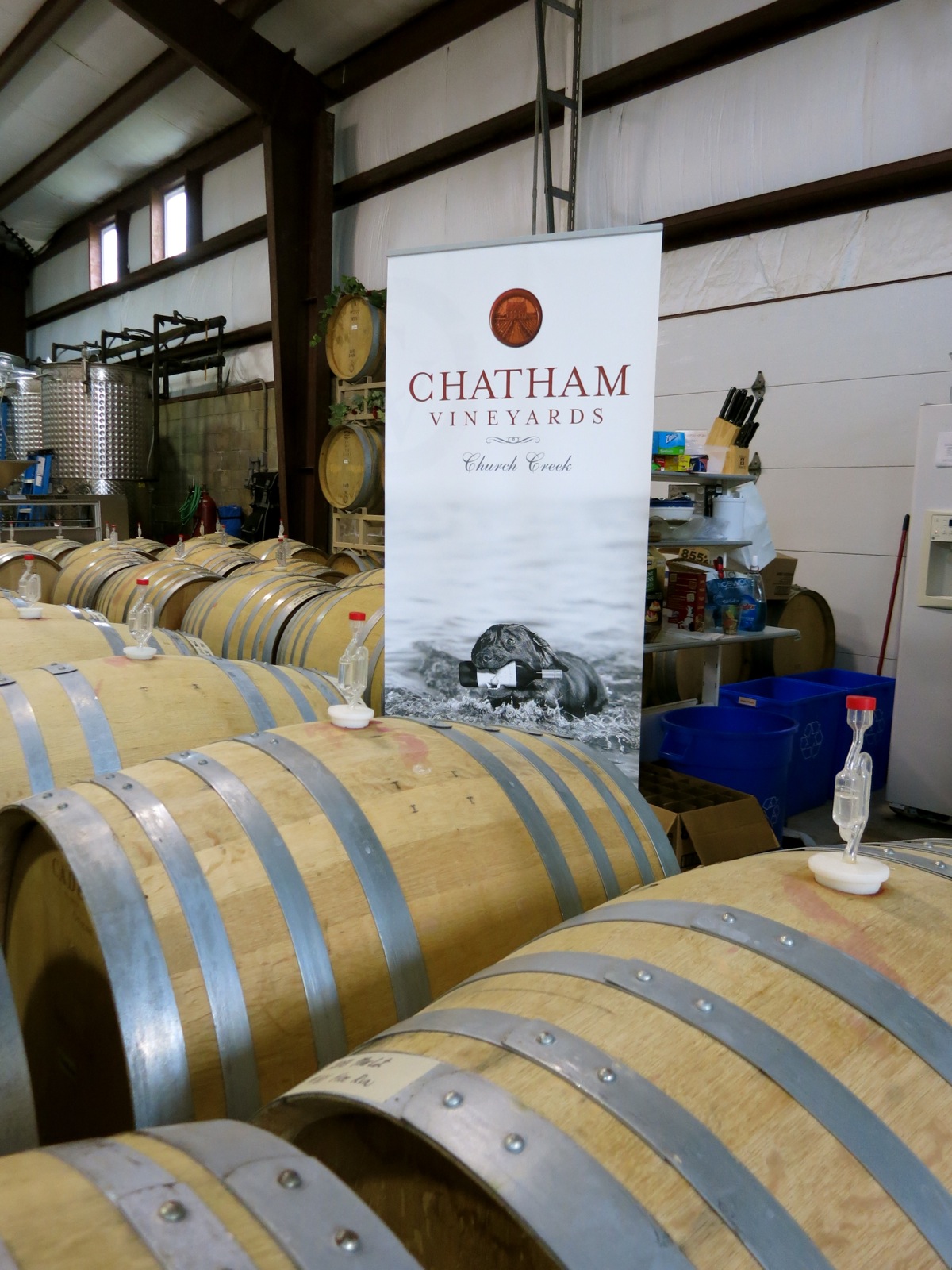 DO: Kayak To Chatham Vineyards for Wine Tasting on the “Paddle Your Glass Off” Tour

No big surprise that this is one of the most popular activities on the Eastern Shore. Paddle from a tiny bayside village of Bayford (Southeast Expeditions provides directions), around a spectacular cove, walk about ½ mile past an 1818 Federal red brick Manor House to taste some award-winning wine, and leave with a bottle of said wine per couple.  What’s not to like?

Winery owner Jon Wehner grew up on his parent’s vineyard in Northern Virginia.  He and his wife, Mills, established Chatham Vineyards in 1999 on twenty acres of Eastern Shore. With its moderate maritime weather, and sandy loam soils it was the perfect region to grow Chardonnay, Merlot, Cabernet Franc, Cabernet Sauvignon and Petit Verdot grapes.

“This isn’t a big party place – we’re serious wine maker – the real deal,” says Wehner, who buys his oak casks from France. Wine Enthusiast Magazine has named Chatham’s Steel Chardonnay (fermented in stainless steel vats) as one of the top 100 Chardonnay’s in the country. “You can taste this place,” Jon admits.  March-Dec, $89 per person, includes tasting and bottle of wine per couple.

A 3-mile by one mile island and one of the last authentic fishing villages in the Chesapeake Bay, Tangier Island, where many of the 500 residents still speak with an Elizabethan dialect, is 12 miles and a world away from the Eastern Shore.

Though there are no banks (or ATM’s), no jails or hospitals, Tangier Island does have its own mayor. And though it welcomes tourists, the island has its own insular, quirky ways. You might have lived on Tangier for decades, but if you weren’t born and raised here, you’re forever a “come-‘ere.”

Take the ferry from Onancock (Joyce Marie II, $25 roundtrip)  and pay attention as you pull into harbor – you’ll pass bungalows on stilts where watermen haul their catch, and small crabbing boats plying the waters.

Golf carts are the accepted mode of transport here, and you can get a quick ten minute tour of the island (that’s all it takes!) given by lively residents. Stop into the Tangier History Museum for a quick overview of life here, and be sure to make some purchases at women-owned gift shops, like  Sandy’s Place.

Go on a Crab Shanty or Waterman tour to find out where your evening’s soft-shell crab dinner comes from then grab a creamy, delicious Queen Crab Soup, and a Crab Cake at Lorraine’s. The ferry from Onancock runs from mid-May to the end of September. Roundtrip fares $25 adults, $12 kids. 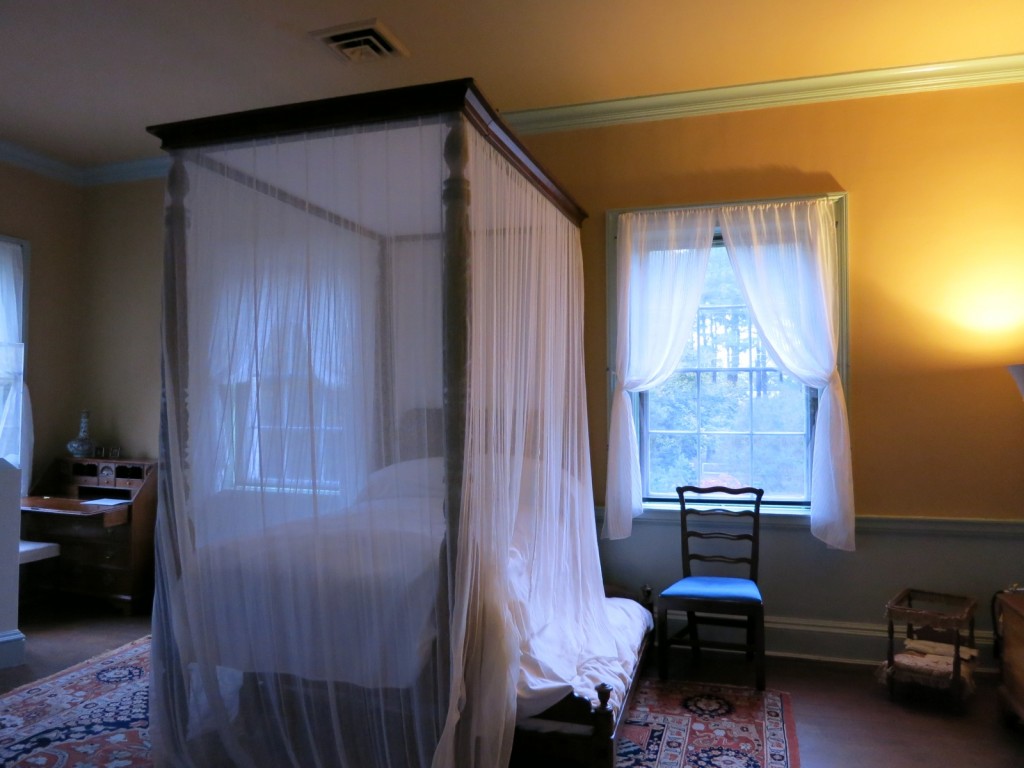 Built in 1799, and the only fully intact Greek Revival Federal-era home on the eastern shore, the Ker House is considered the “Crown Jewel of the Peninsula” by many historical preservationists. John and Agnes Ker (pronounced “car”) received this home and 675 acres as a wedding gift.

Astoundingly, all window glass panes and moldings are original to the house. Most of the furniture, including the couple’s carved four-poster trundle bed, is as well. Mauve parlor walls, and cantaloupe-yellow painted bedrooms are indicative of the bold use of color at the time.

John died of Mercury poisoning in his 30’s (he was taking medication laden with it). So Agnes, in her grief, had black stripes added to green moldings throughout the house.

Don’t leave before inspecting a small portrait of George Washington, painted by Gilbert Stuart and his daughter, Jane, who helped him complete many of his portraits. Both Gilbert and Jane’s name grace the frame, a rare find indeed. Tues. – Sat. 11am-3pm March – Dec. $5 adults, kids free. 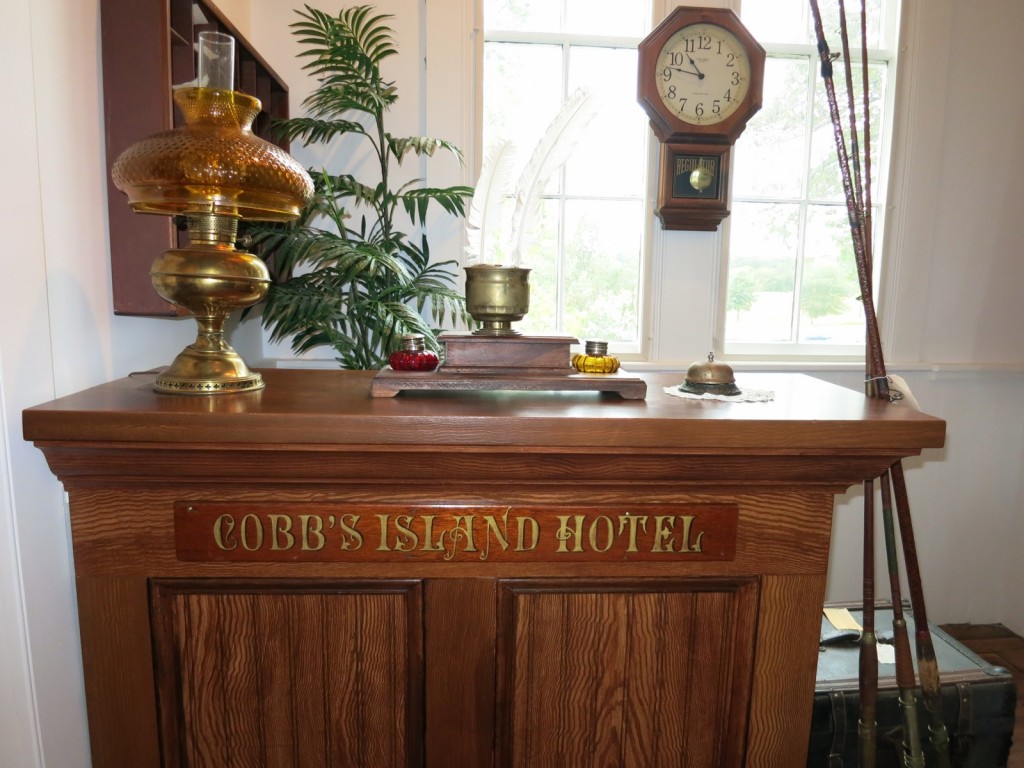 A map of the Eastern Shore shows a string of barrier islands off the Atlantic Coast. Known as “Nature’s Speed bumps” – because they mitigate hazardous swells created by Atlantic Ocean storms – some of these spits of land, such as Hog Island and Cobb’s Island, once featured popular resorts, Gun Clubs, seafood companies and self-sufficient full-time residents.

But after major storms in 1933 destroyed homes and endangered lives, islanders gave up this way of life. They actually floated whole houses off the island and onto the Eastern Shore, where they were relatively safe. In the 1970’s, out-of-town and out-of-state collectors were buying anything and everything that came off those barrier islands. The Barrier Island Center was established to preserve and keep these artifacts where they belong.

And so, you’ll find remnants from Cobb’s Island Hotel. This fine establishment catered to wealthy hunters who arrived with personal hunting guides. There’s also  a whole section on duck decoys fashioned by famous carvers. The antique farmhouse in which the museum is housed features a rare 1890’s “twisted chimney” in the attic. To learn more about this vanished way of life, watch the Barrier Island Center documentary, “Our Island Home,” shown on PBS. 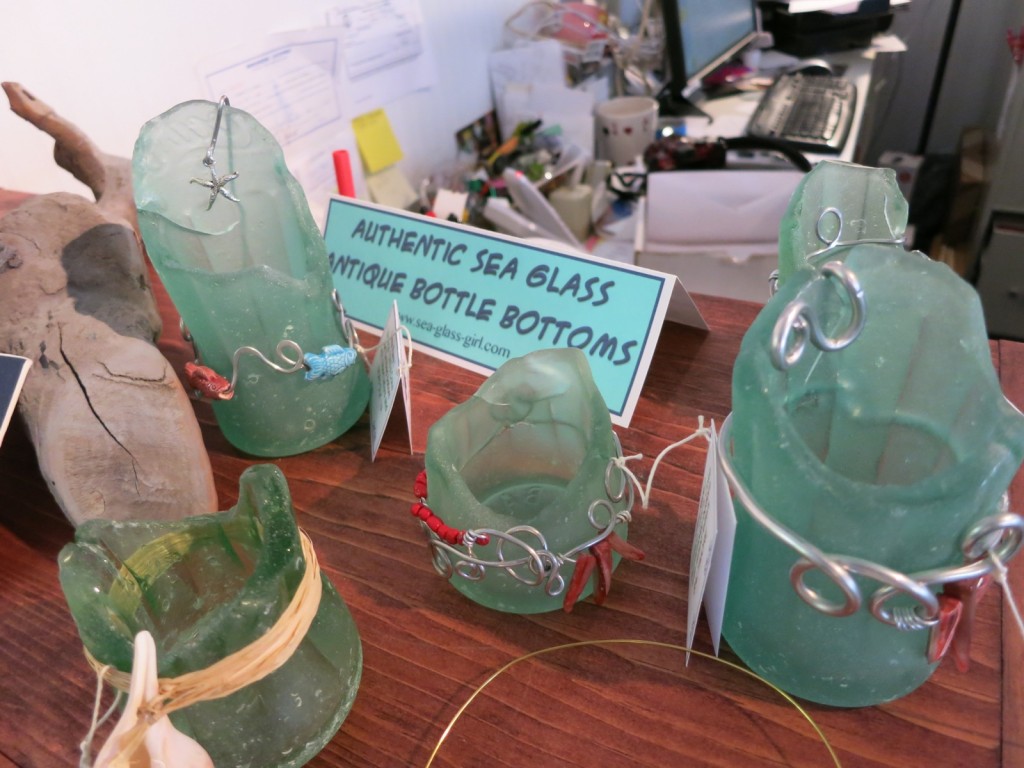 Local landscape artist, Willie Crocket, talks to you as he paints. His oils start at the unbelievable $350 – and that includes the frame. In fact, the photo above, of a spectacular Onancock sunrise, is a Willie Crocket original. 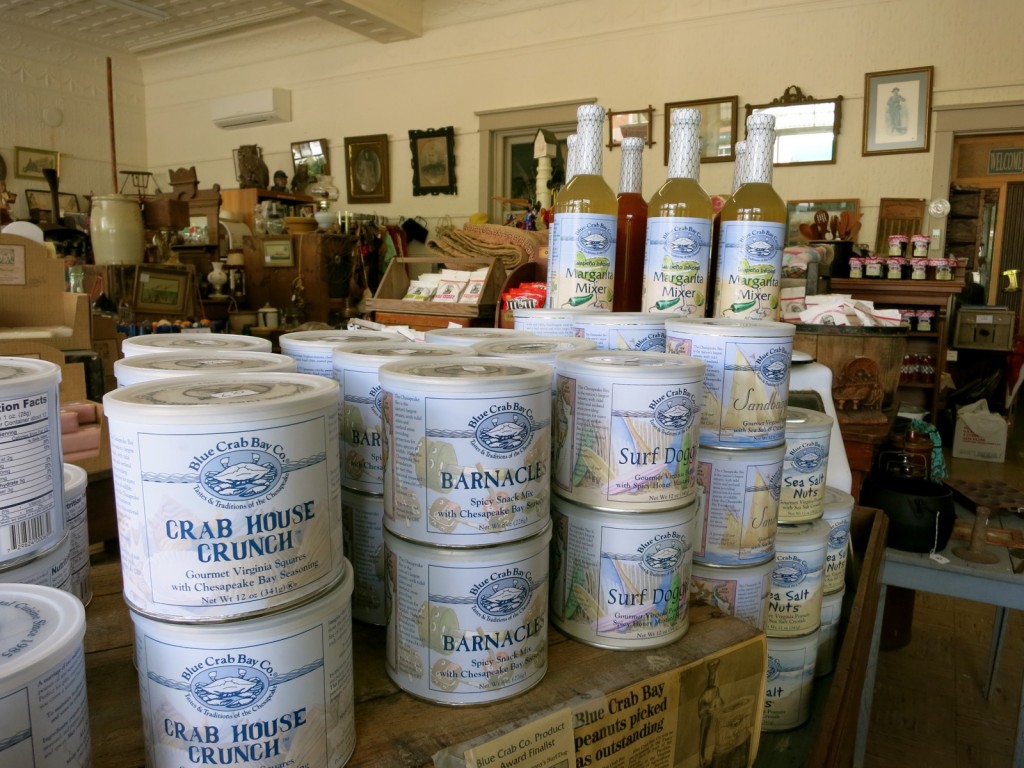 This is the go-to place for antiques and architectural salvage, plus some local “flavor.” Pick up a can of Blue Crab Bay Co. Jalapeño Margarita flavored nuts ($6.99).

Where to Eat in Onancock VA and the Eastern Shore 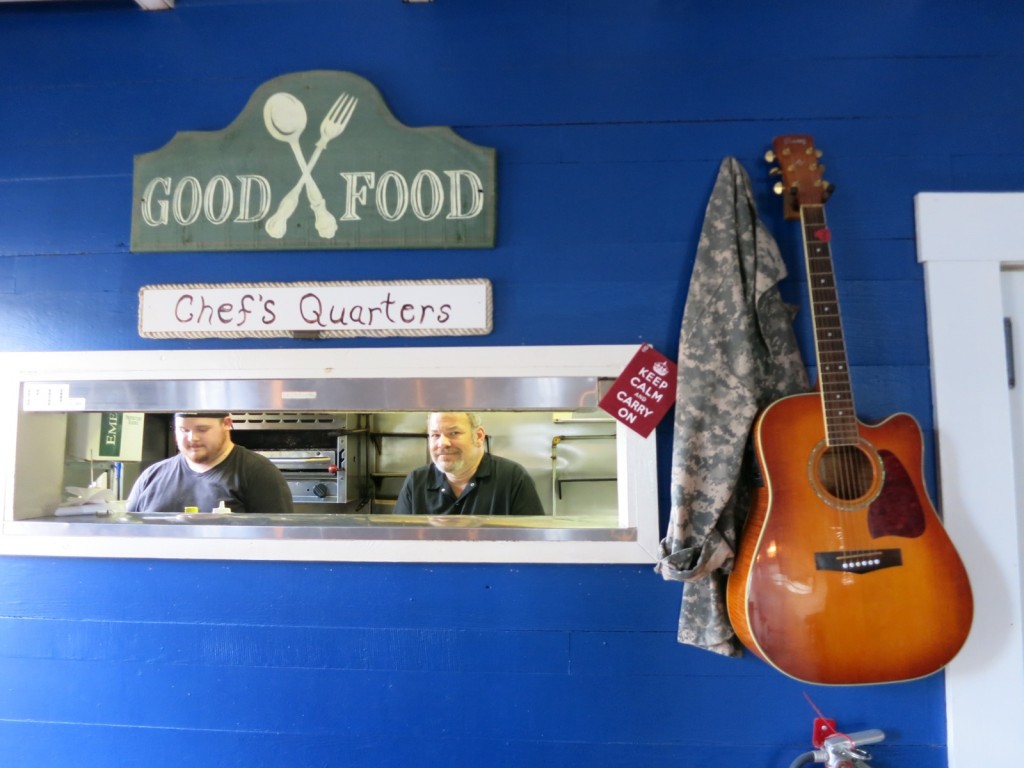 EAT: Mallard’s At the Wharf

In its prior life, this was Hopkin’s Bros. General Store. It’s now home to “musical chef” Johny Mo. Nosh on local oysters, salads, wings and wraps on the outdoor deck hard by a dock where boats practically nod up onto your lap.

In November 2016, new owners Kim Moore and Matt Spuck purchased Inn at Onancock from Lisa and Kris LaMontagne. Opulent, eclectically decorated rooms will not disappoint the most jaded traveler. Stone floor soaking-tub bathrooms are of a “let me ease back and unwind” caliber.

An old-world in-town hotel with a modern twist, The Charlotte is an intimate boutique hotel. Charlotte is also known for it’s terrific restaurant.

Both the 1882 Colonial Manor Inn, and Spinning Wheel B&B and ooze Onancock hospitality.