WHY GO: It sure isn’t for the nightlife.  There is none here, which of course is part of its appeal.  Chincoteague VA is the best known of all the towns on Virginia’s quiet Eastern Shore thanks to the 1945 book “Misty of Chincoteague,” which brought awareness of the wild ponies on Assateague Island to the world.

But while most people know about the horses, many are not aware that this is also a NASA hotspot. Supplies for the International Space Station are shot into orbit within pony’s eye view on NASA’s Wallop’s Island – an electrifying aspect of this most Southern region of the Delmarva (Delaware, Maryland, Virginia) Peninsula.

And for whatever reason, the people of the Eastern Shore are inherently nice. This area is known for its genuinely kind, friendly and laid-back residents who will restore your faith in humanity, not to mention lower your blood pressure.  Meet them, and you’ll be planning your next trip back pronto.

Chincoteague is on our list of 20 Surprisingly Romantic Getaways in VA. Check it out if you wish to explore the state further.

Best Things to Do In Chincoteague VA

Admit it.  This is what you came here for.  According to Captain Dan (of Capt. Dan’s Around the Island Tours – see below), two of the best places to find the wild ponies are “1) across the fence line on Beach Rd. between the lighthouse and the Woodland Trail on Assateague Island, and 2) on a hike up the Woodland Trail on the Wild Pony Overlook – sometimes the ponies are loose right on the path.”

The barrier island of Assateague extends from Maryland to Virginia and each state has its own policies regarding the wild animals. On the Virginia side, 150 little horses are actually “vetted” a few times a year– veterinarians make sure they are healthy and well fed.

Every July with much fanfare, the ponies are cajoled (by “saltwater cowboys”) to swim across a small channel to Chincoteague. There, the foals are penned and then auctioned off (for an average $1,600) as fundraiser for the Volunteer Fire Department. 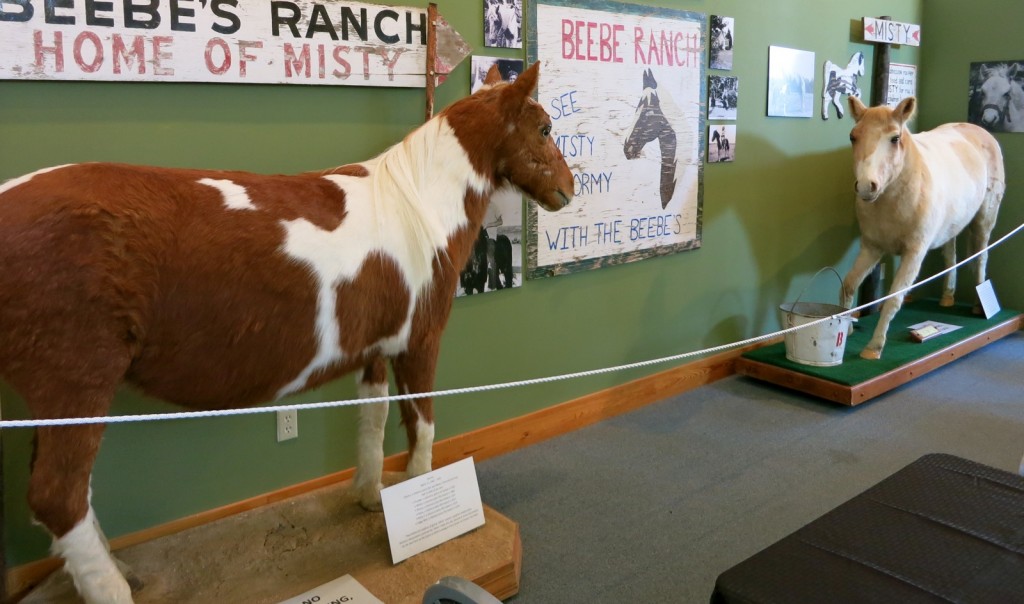 At the entrance of Assateague Island Refuge, this small museum is the resting place of “artfully preserved” Misty and her foal, Stormy.

It can be somewhat jarring to see these famous ponies taxidermied stock-still forever. Less jarring, but equally impressive are the dozen pair of stuffed of waterfowl – so rare a collection that artists come in to sketch them.

This museum is worth a few minutes of your time to understand the history of the area, from Native Americans to shipwrecks to Seafood and Oyster industry. And, of course, to see Misty. Open Tues-Sun. 11am-5pm, $4.

The boat may be small and carry only six people at a time, but all’s the better on this intimate three hour circumnavigation of Chincoteague Island.

It takes 5 minutes for ponies to cross the very narrow channel from Assateague to Chincoteague – a width that’s just a few times the wing-span of an NBA star.  Yet despite the brevity of the event, an estimated 30,000-50,000 tourists inundate the area annually to watch it.

Visitors routinely see Bald Eagles, dolphins, cormorants and other wildlife during Captain Dan’s tour. But on May 21, 2012, while hovering near the Assateague shoreline, Dan’s guests were privy to a once-in-a-lifetime experience: they observed Carnival Baby give birth to her first foal.

Tours go out multiple times a day from April to Nov. $40, adults $35 kids. Though you might see ponies throughout the day, the Mavens prefer sunset, which allows for the most dramatic photography. 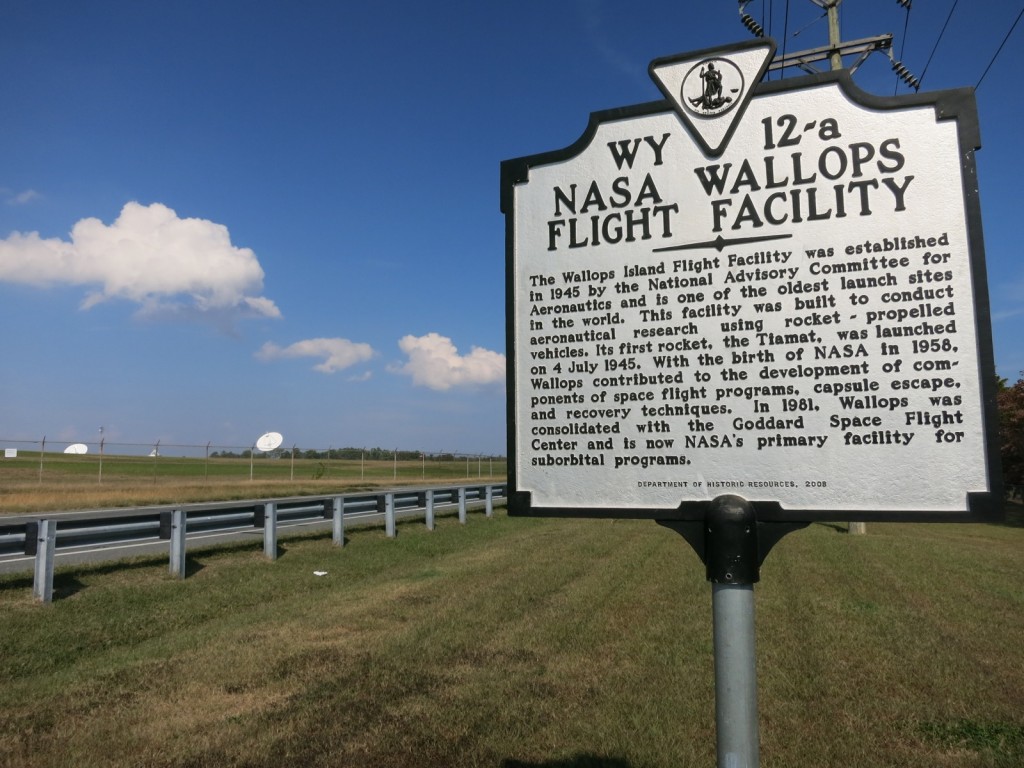 Driving up the rural road from Route 13 to Chincoteague, you’ll see an abundance of massive satellite dishes: certainly not the pastoral low-tech pony-rich landscape you were expecting.

Established in 1945, Wallops Island is one of the world’s oldest rocket launch sites. It is now home to NASA’s Suborbital Vehicle activities.

The Visitor’s Center is small but compact, and introduces you to a part of the Space Program that most Americans don’t even know exists. Tuesday- Saturday 10-4 from September- June, daily 10-4 in July and August, FREE. 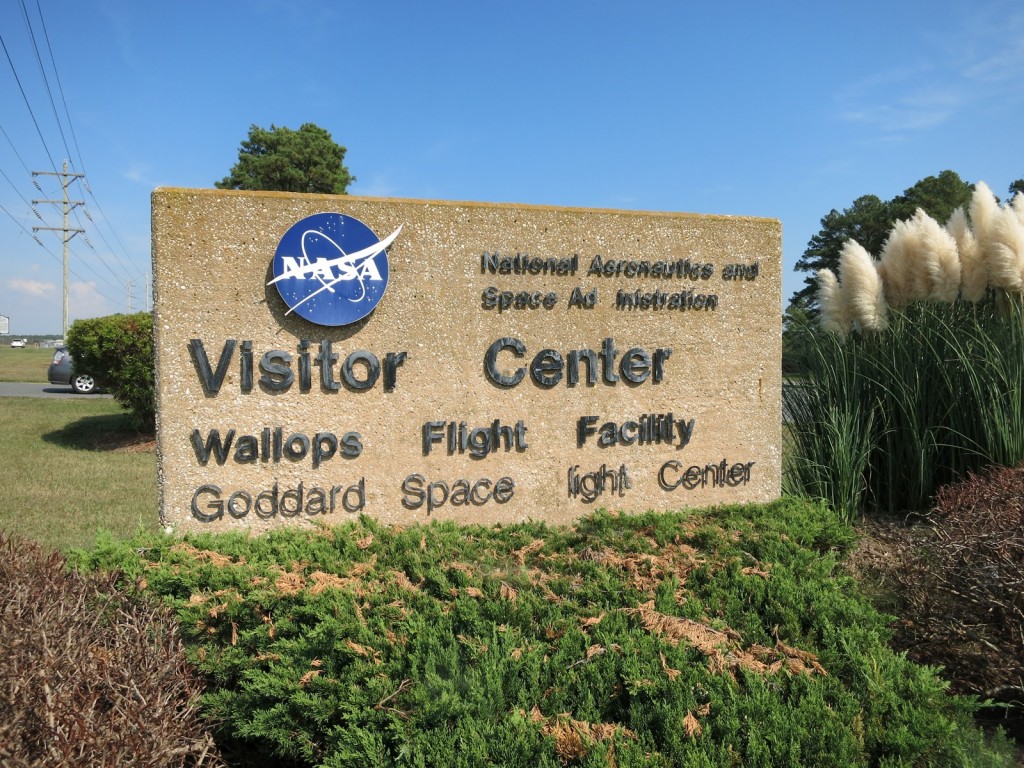 If you time it right, you can watch history being made.  Pretend you’re in Florida, and you can see a payload heading up to the International Space Station in all of its “bone-jarring sound and majesty.”  For launch dates, go to www.nasa.gov/wallops.

Pick up a bottle of Chincoteague Wild Pony Blanc for a pony-viewing picnic or rocket-launch dinner. Owners takes joy in recommending other esoteric wines, and also sell gourmet food, premium cigars and everything you need for a delightful DIY meal.

You can’t miss the shack with the peace sign on the roof. Owners call their fare, “slow food. We care how it’s prepared, where it comes from and how food impacts the world.”

Everything is fresh and made from scratch in this outdoor picnic table place. Innovative concoctions include “Pork & Sea” – a sandwich of pork topped with red sauce and onion rings and The Clipper; chicken, pork, “bacon jam,” slaw and rum sauce.  Nirvana. 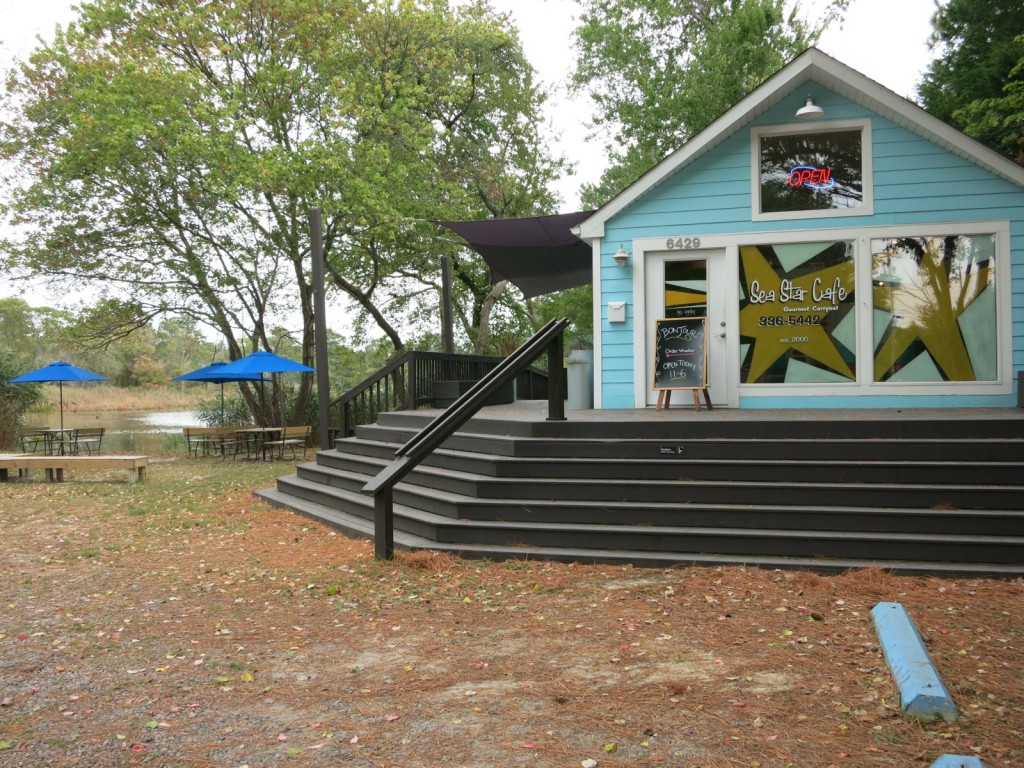 Another casual fresh, foodie take-out place. You can custom-design your own sandwiches or order Vegan, Vegetarian or Classic Café and Croissant Sandwiches – all for around $6-$7. 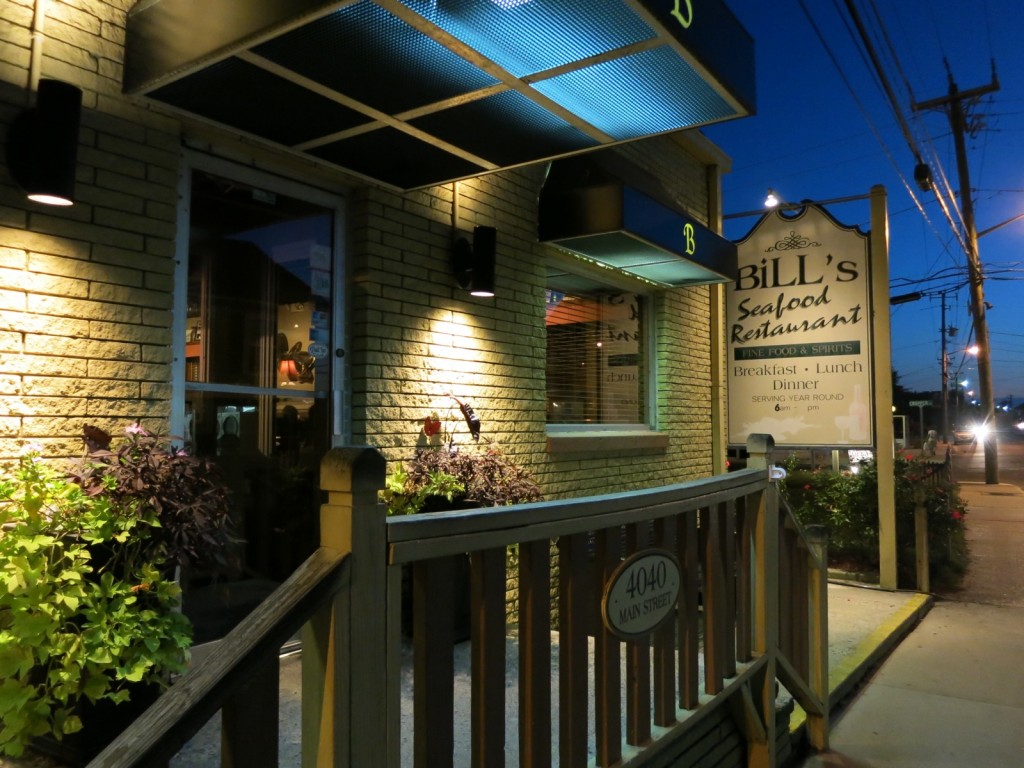 Chincoteague is best at casual dining, but if you’d like a spot of wine, a cocktail and better-dressed patrons, follow tradition and order the Flounder Dinner at Bill’s Seafood.  It’s been on the menu since 1960.  Then, conclude with the multi-layer chocolate cake.  Decadent. 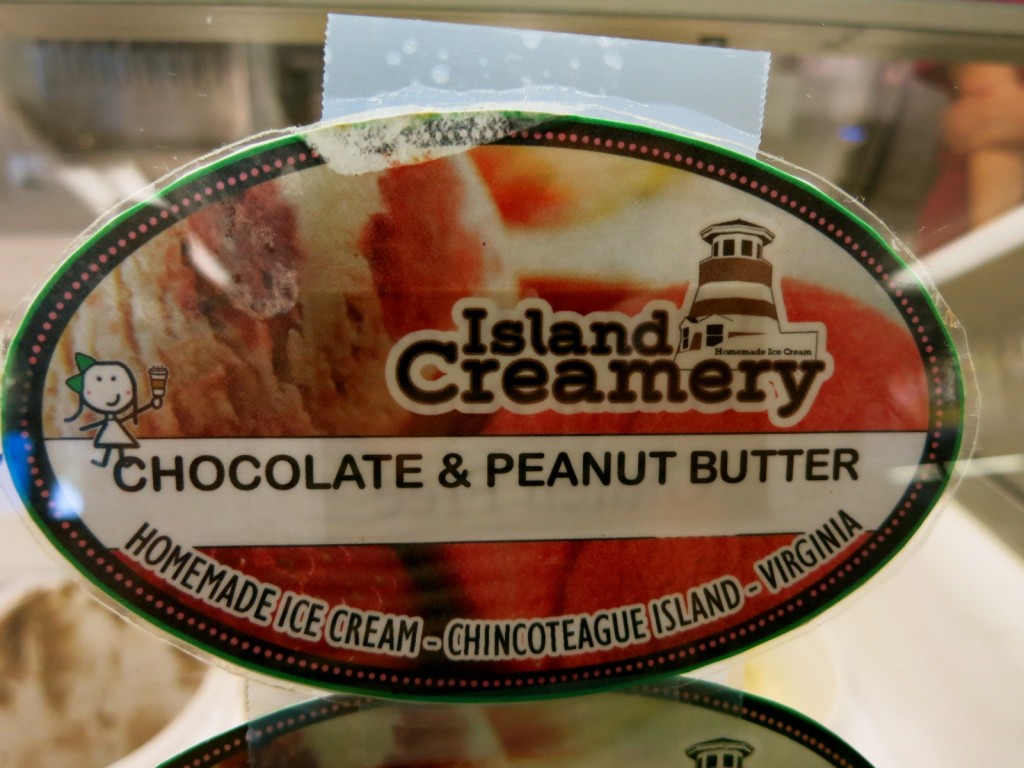 Voted one of Top 5 Ice-Cream shops in Virginia, the cold sweet stuff is rich, creamy and entirely awesome. You’ll be thinking of the next flavor as soon as you polish off the first cone.

It’s homey like Grandma’s house, if Grandma made world-class scones. Barbara and David Wiedenheft greet each guest like long-lost friends. You’ll get a hug and peck on the cheek even if you’ve never been here before.

Barbara is famous for her crispy/ethereal scones. If you’re around later in the day, join Barbara and her husband, David, for a four-course authentic English Afternoon Tea ($25 – or $15 for overnight guests).

Otherwise, hope that Barbara serves a selection of her scones at the outrageously delicious four-course piece-de-resistance communal gourmet breakfast in the morning. I dare you to stop at one. Rates from $135-$260/night. Includes four course gourmet breakfast, water and soft drinks, use of bicycles, beach towels, beach chairs and unlimited hugs.

If you’re looking for a full-service hotel, the cheery waterfront Hampton Inn is a sure bet. Rates range from “waterview” offseason double, $79, to “waterfront” prime season suite $289, includes continental breakfast. 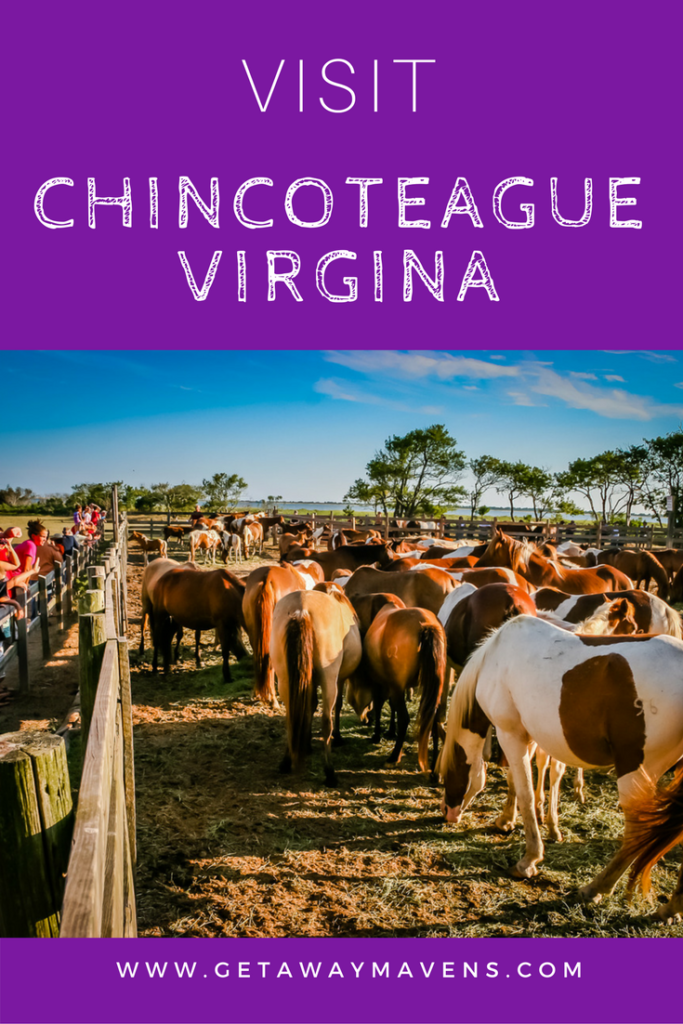 1 thought on “Chincoteague VA; Ponies, Rockets and The Friendliest People”