Home » Southeast » Virginia » Hampton VA: Have a Blast in Crabtown

WHY GO: There is so much approachable, invigorating, epic history packed into Hampton VA, it makes this average American wonder how it’s escaped more national attention all these years. Four hundred year old Hampton is the country’s oldest English-Speaking settlement.

Hampton is where the first twenty African slaves were deposited in 1619. It’s the site of the first African-American Art Museum on the campus of one of the country’s first Black colleges (established in 1868). And it’s the place where the pirate Blackbeard met his bloody, head-on-stick end.

Edgar Allan Poe was enlisted, and Jefferson Davis served time in jail, at our nation’s newest National Historic Site, Fort Monroe. And Langley Air Force Base Research Center, is based, you guessed it – right in Hampton. Langley, you may have heard, established NASA’s Mercury Project, literally sparking the space race. You’ll eat well, sleep well, and have a blast (off) learning about our country’s origins – to infinity and beyond – in this Chesapeake Bay town.

Things to Do in Hampton VA 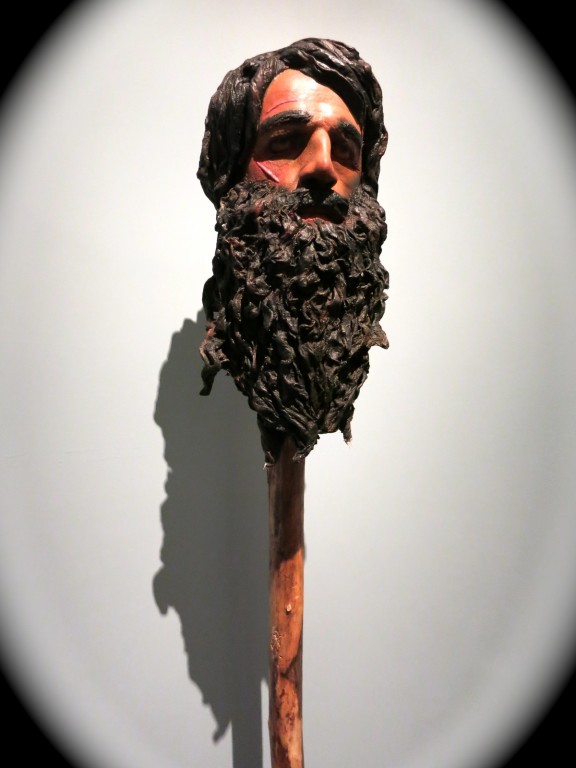 Pocahontas’s father lived on the land where our country’s first Space Center was built. That’s in effect the span of time covered in this delightful local history museum.

An exhibit that should be titled, “White Men Behaving Badly,” follows merchants from Europe looking for a shortcut to China. They found generous Native Americans bearing tobacco instead.

So, what did they do? In the mid 1600’s, said Europeans returned with guns to tame or wipe out those welcoming indigenous tribes, and cultivated the tobacco-rich land for themselves. 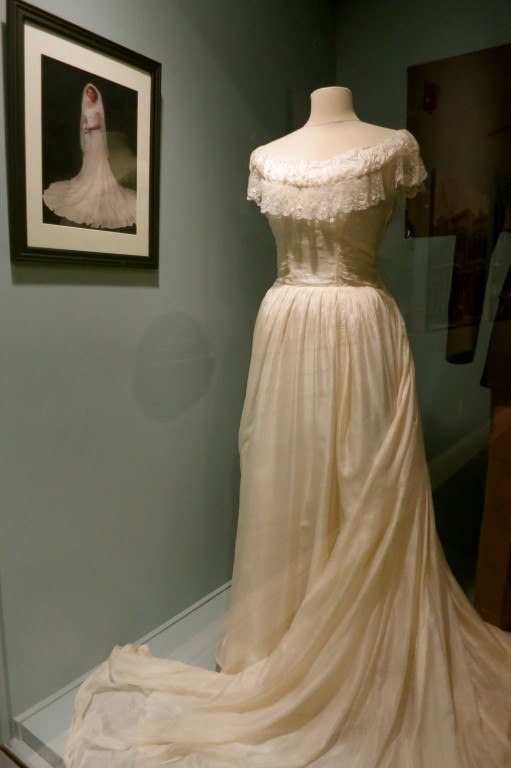 The Tobacco Trade saved Colonial Virginia. And due to the wealth it created, gave rise to a cosmopolitan aspect unmatched in the colonies.

This area became one of the biggest tobacco ports by the early 1700’s. Large barrels full were shipped to England, with the same barrels overflowing with wine, textiles, Chinese Porcelain, Dutch Delftware and other civilized comforts on the return trip.

These riches drew a nefarious element offshore.  Pirates intercepted merchant ships, taking all the booty for themselves.

How to put an end to the pilfering? By capturing Captain Edward Teach – aka – Blackbeard, the most fearsome of them all. Decapitated, his head was impaled on a ships bowsprit, sailed back to Hampton and hung from a pole on what is now Blackbeard’s Point.

After the Civil War, the Oyster, crab and seafood industry kicked into gear and Hampton became known as “Crab Town.” (the High School football team remains the Hampton Crabbers).

Serving as Langley AFB official Visitor’s Center, the Virginia Air and Space Museum is an OMG kind of place. Vast, sun-lit, and with over a hundred interactive exhibits and dozens of whole airplanes (many suspended from the Rocket-Hanger high ceiling), it can be overwhelming.

Check out the experimental pop-up housing structure, designed for use in space or on inhospitable-to-human environments, care of the brains at NASA. Though not fully developed, it clues you in on the possibilities.

The Center covers flight from the Paris, France launch of the first Hot Air Balloon in 1783 to the remote Mars Explorers now in use.”

Project Mercury was headquartered in Hampton, so this museum is home to some famous NASA artifacts, including the original Apollo 12 Command Module.

The simulated Lunar Lander used to train astronauts at Langley is one of the most intriguing exhibits. Suspended by cranes above a landscape that replicated the surface of the moon, the astronauts “landed” their mock Lunar Module via small rocket motors.

Armstrong’s first words when touching down on the real moon were, “Houston, it was just like landing at Langley!”

Ducking under low stone arches from one casement (rooms in a fort) to another, discover the history of Fort Monroe – the largest all-stone fort ever built in the U.S. and just decommissioned in 2011.

Storms destroyed prior forts on this property over the years, but after the War of 1812, when unprotected Hampton was sacked by the Brits, Congress authorized a fortification to be built for coastal defense.

And enlisted man, Edgar Allan Poe spent a few months here in 1828 before heading to West Point (from which he was kicked out the following year). 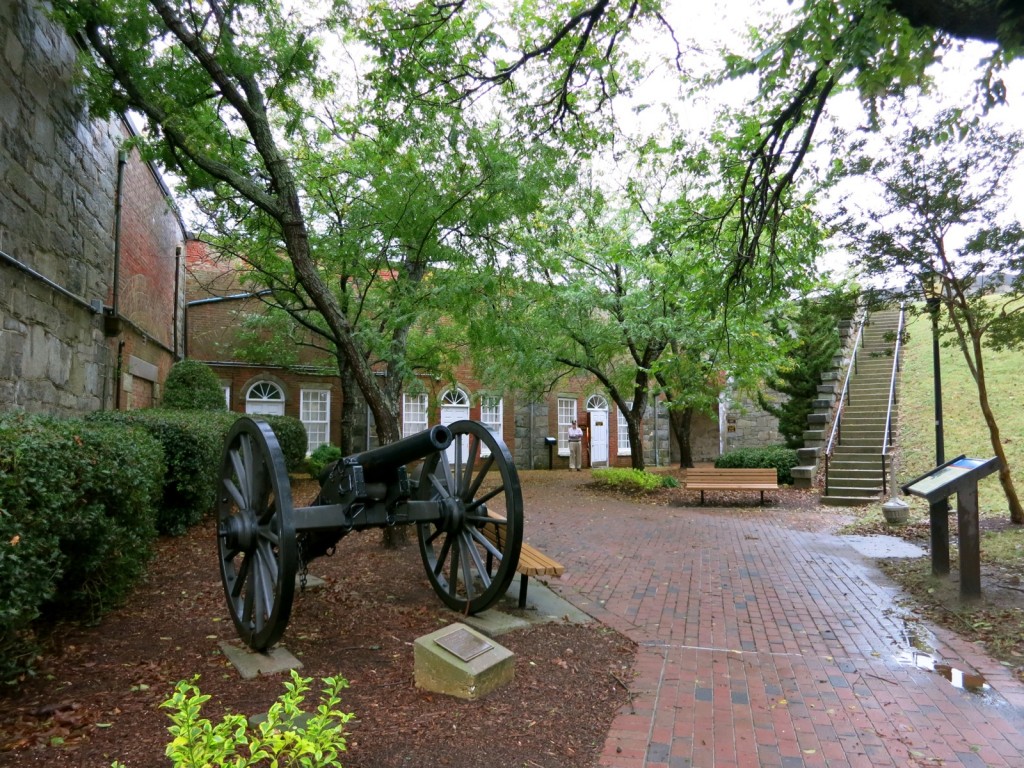 On Butler’s first day in residence, three escaped slaves sought asylum. Under the Fugitive Slave Act, Butler was required to return them to their owners. But he came up with the perfect loophole.

As a Confederate State that seceded from the US, Virginia was considered a “foreign country at war with the US.” So Butler seized the slaves as “contraband,” which led to the Contraband of War Decision which evolved into the Emancipation Proclamation.

Slaves in the Hampton area got the memo quickly, “If you can get to Fort Monroe, you can be free!” Thus Fort Monroe became “Freedom’s Fortress.” 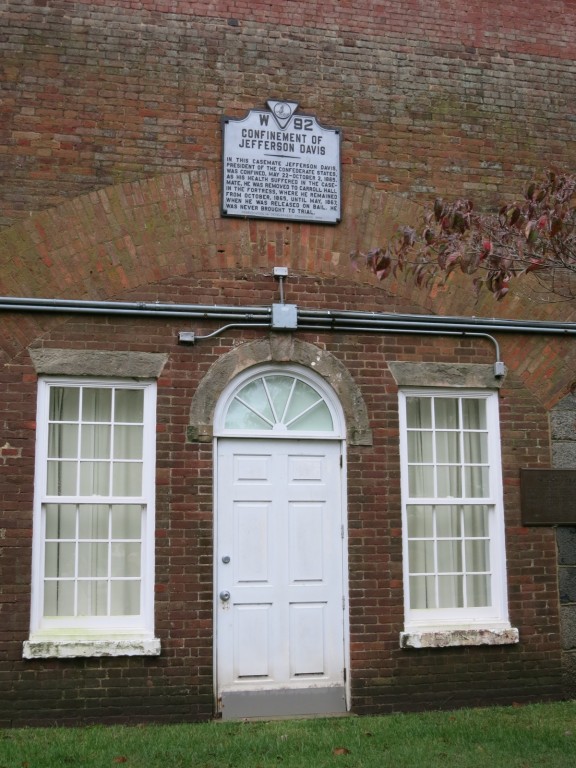 Stand inside the cell where Confederate General, Jefferson Davis was held – allowed only a Bible and Book of Episcopal Prayer. He was charged with, among other things, treason and mistreatment of Union prisoners. In 1867, Davis was released on bond and, in 1869, all charges were dropped.

From 1870-1930’s, the breezy, waterfront Fort Monroe included a resort with 2,600 hotel rooms. It became such a popular destination, mothers sent their daughters there to “catch a soldier.”

Some really offbeat trivia; the fort was home to the longest contiguous 24/7 poker game that ran from just after the Civil War to World War I. And, mysteriously, 244 pets are buried on the parapet.  Open Tues-Sun. 10:30-4:30. Free

Owned by Randy and Jill Pryor, Patriot Segway Tour Company offers the best ways to learn about the deep history of Hampton VA while tooling around on two wheels.

This dynamic tour takes you all through Fort Monroe and its outskirts around Port Comfort. Stand exactly where the “20 and odd” Africans, confiscated from a Spanish slave ship, were offloaded onto the docks in August 1619.

Among them were Antoney and Isabella. Their son William, baptized in 1624, is the first documented African child born in English North America.

Randy leads up to six guests on a one or two hour foray around the fort, pausing at the Casement Museum, which you can further tour at another time.

Curious about the origin of the phrase, “it could freeze the balls off a brass monkey?” (Believe me, it’s not what you think it is). Just ask Randy to show and tell.

Along the way, you’ll also learn about the Church with a surprising “fiery” history, see the 475-year-old “Algernourne Oak, and hear stories about the 49,100 lb. “Lincoln” cannon that could propel exploding cannonballs 4 ¼ -miles. All the while, Randy peppers his narration with intriguing commentary. Thurs – Sunday, Tours include segway-riding instruction. One hour tours at 10am, 2pm $39 pp, two hour tours 11:30am, $65pp.

The oldest African-American Museum in the country was established in 1868 on the campus of Booker T. Washington’s alma matter, Hampton University.

In 1878, Hampton University opened its doors to Native Americans, and has been multi-cultural ever since.

Though the University’s founder, General Samuel Chapman Armstrong, a son of Hawaiin based missionaries, was white, he led several black troops during the Civil War, and modeled Hampton College after his parent’s motto: Hands, Head, Heart.

Black missionary William Sheppard brought back one of the museum’s prized possessions: a riveting Kuba mask from the Congo. The reason he scored such a precious gift? The Kuba regarded Sheppard as their reincarnated King. Thus, the Royal family accepted him with reverence, and this mask. The current Kuba King’s young brother attended Hampton for his MBA. And so the tradition continues.

Plus, one of the three pens Abe Lincoln used to sign the Emancipation Proclamation is also on display. A most thrilling artifact. Open Mon-Fri 8am-5pm, Sat. Noon-4, free, donations welcomed. 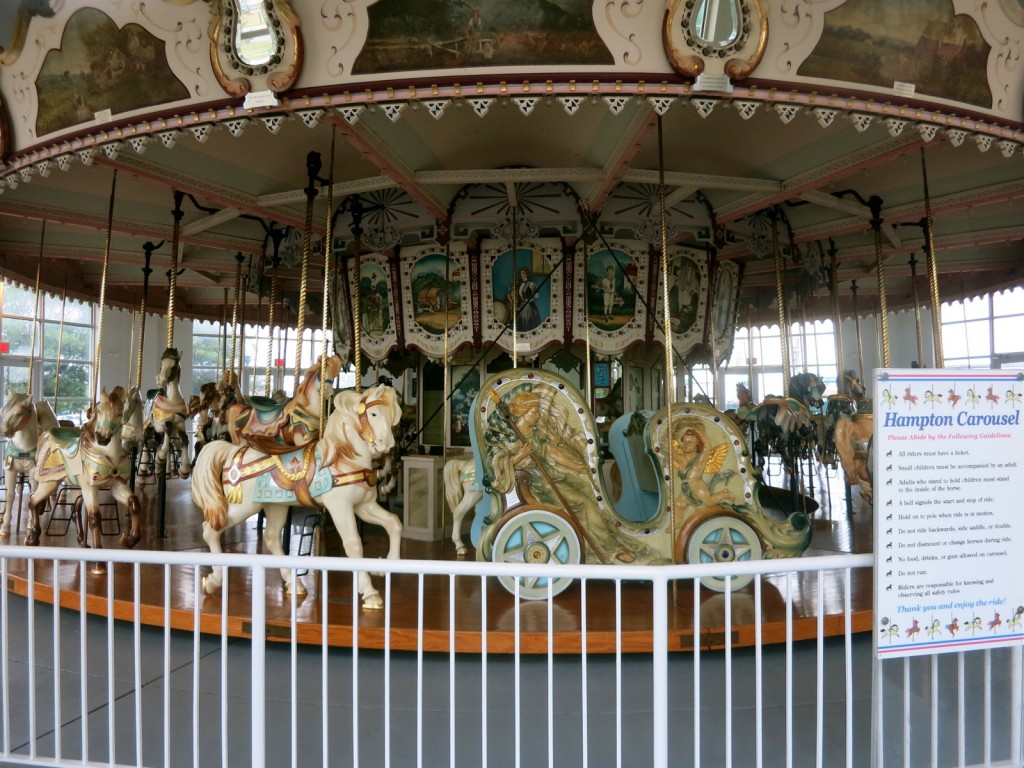 SPIN: On the Hampton Carousel

Built in 1920 and restored to it’s original luster, this is one of only 170 antique wooden merry-go-rounds left in the United States. Rides $2 each.

When you crave Southern-French-Creole-Neo-Soul food, you gotta come to this pretty grey and orange place. Here, veggie burgers come topped with Fried Green Tomatoes.  Sure, you can get Chicken-Fried-Chicken ($17), and Salmon Lafayette smothered in etouffee tomato cream sauce ($22).

But my fave was the smashing Ginger Shrimp ($12) – a perfect blend of snappy and sweet. On Tuesdays, join a Yoga class on the roof at sunset. $15 gets you use of a mat and a Green Smoothie afterwards. If you buy nothing else, come for the mango preserves. Made on site, it’s outrageously good. 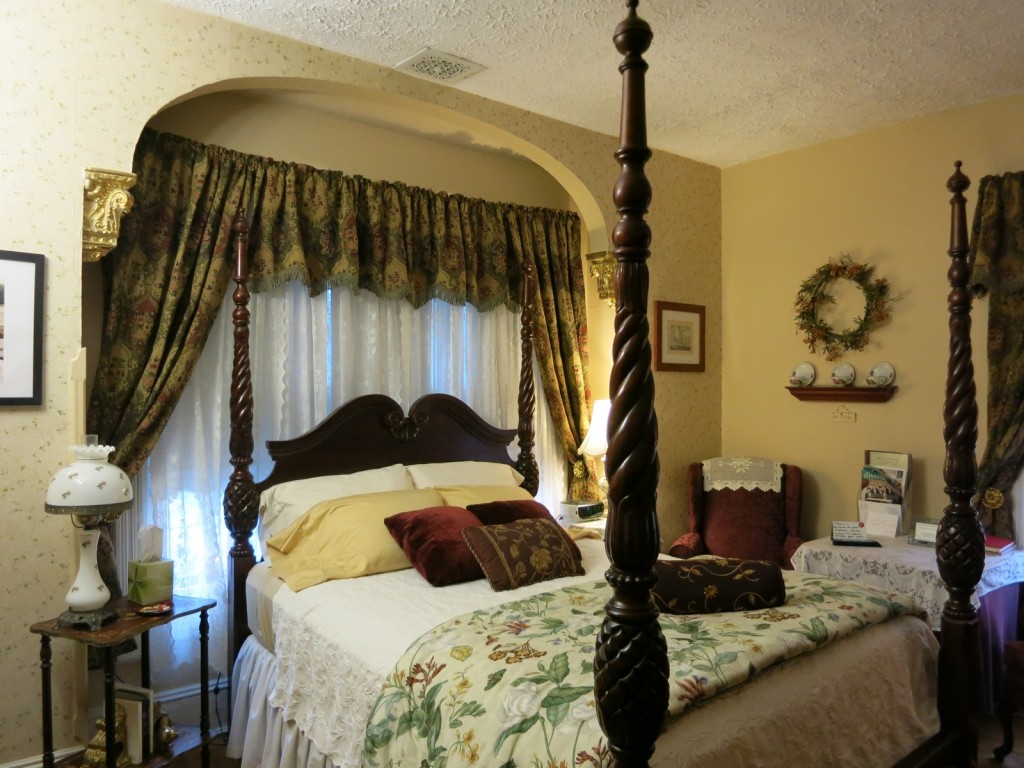 Lankford and Joyce Blair created a lovely, upscale B&B with a unique feature; it doubles as a small wedding venue for up to 20 guests.

Lankford is a Mental Health administrator. Joyce has been a surgical nurse for over 25 years. Though they are both “grounded in their careers,” the couple started inn-keeping as a natural extension of “wanting to take care of people.”

Three baronial rooms with extravagant bathrooms come with full breakfast. In addition, wine and soft drinks are available to take out to the inviting wraparound porch. Rooms $130-$275 include hot multi-course breakfast.

STAY: There are franchise hotels aplenty, especially near the Coliseum. Take your pick. They’re all good. I stayed at the Courtyard by Marriott, which was friendly, clean, and a quick ride into downtown. 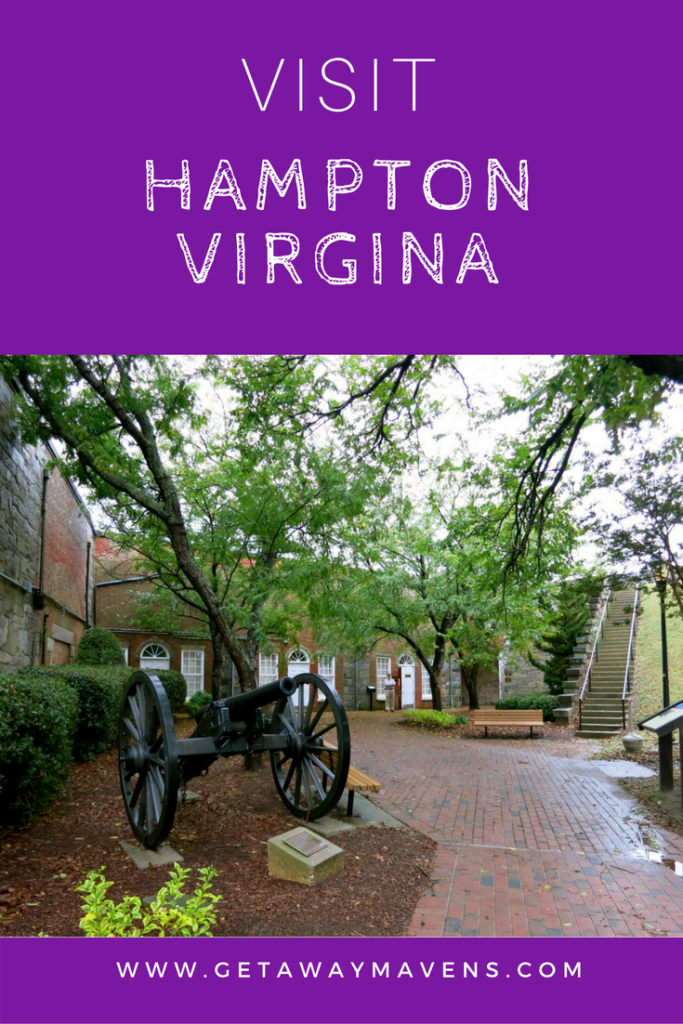 4 thoughts on “Hampton VA: Have a Blast in Crabtown”