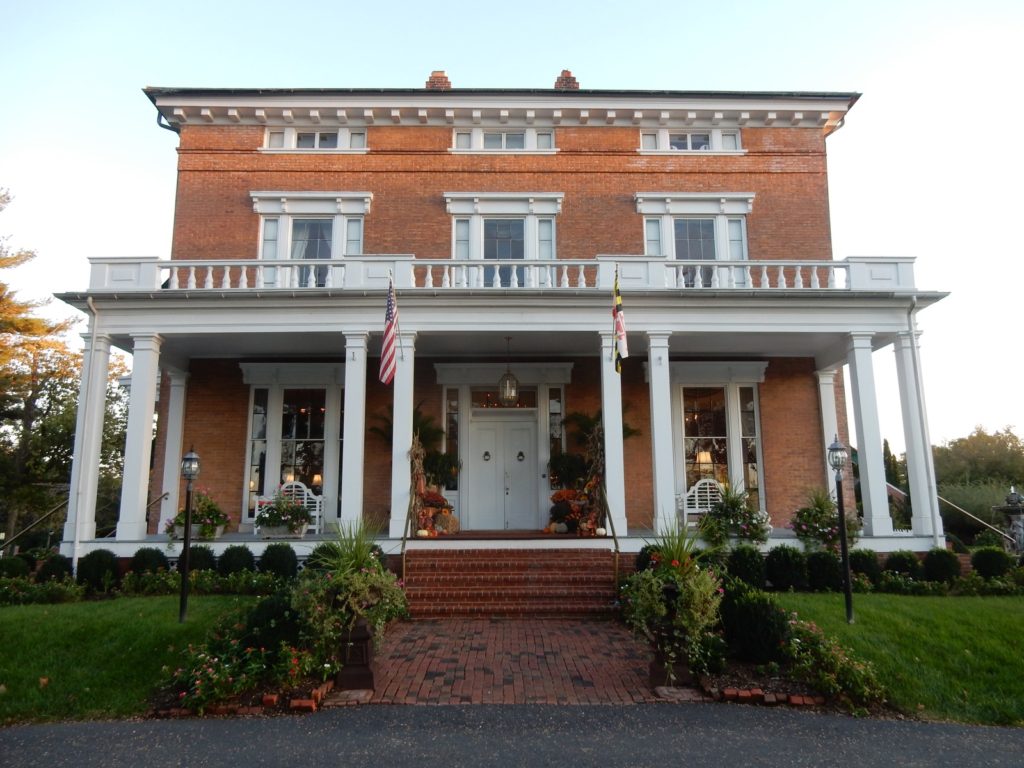 For luxury travelers, there really is only one place to stay in Carroll County MD: Antrim 1844. This baronial country inn is actually the reason most people come to Taneytown MD. Surprisingly, though, it’s virtually unknown outside of the Mid-Atlantic.

For me, discovering this place was akin to hiking forever in a remote forest, and, in a clearing, coming upon a Civil War era mansion with butler service, finery, champagne, and five star dining.

Antrim 1844 is so romantic, we included it on our Best Romantic Hotels in Maryland post.

My first view of the high ceilings, grand portraiture, and floating curved staircase in the entry foyer literally took my breath away.

Antrim 1844 encompasses 40 unique guest rooms in several buildings on beautifully landscaped grounds. Wine Spectator Magazine has bestowed its Award of Excellence upon the fine in-house Smokehouse Restaurant and its 22,000-bottle wine cellar (in the original boiler room), 20 years in a row.

On par with many Relais & Chateaux or Leading Hotels of the World properties, and on the Select Registry and the National Historic Register, this is not a dusty antique inn resting on its laurels. Kept up impeccably, I was surprised to have never heard about Antrim 1844 until now.

Built in 1844 by Col. Andrew Ege, and named for his ancestral home, Antrim was a 400-acre farm, and a Confederate encampment during the Civil War. You can still see Gettysburg from the top of the Widow’s Walk.

By 1987, the home had been sitting vacant for 70 years, but was in good shape due to the vigilance of its neighbors.

When Richard and Dorothy (Dort) Mollett purchased Antrim, the place had no running water or electricity. The couple showered in Baltimore after taking their kids to school each day. In 1988, the Mollett’s opened four rooms as a B&B. They continued to improve and renovate the interior, but it was slow going. Dort did much of the enhancements and decorating herself, which makes this place even more remarkable.

Not only did the Mollett’s rescue this home, they did the same for others in town.

Smith House – with several rooms on the far side of the garden – was once the home of a Taneytown piano teacher. It eventually fell into the hands of the local fire department, that would routinely set it on fire for training purposes.

The Mollett’s got the Smith House in exchange for a $200 donation to the Fire Department. They spent more money moving it than if they’d built a cottage from scratch on the property.

After catching my breath, I walked to the reception desk, in a former parlor room right off the center hallway. Check in is rather laid back and friendly. The lack of pretension in such a place, refreshing.

Two grand rooms on the main floor impart an era of gentility rarely seen these days. They are opulently and impeccably dressed, down to the wallpaper that covers and hides electrical cords.

The original horsehair plaster medallions in the ceiling, above brass chandlers, have been lovingly preserved. The Mollett’s were able to painstakingly snake electrical wiring through existing methane gas tubes originally used for lighting. Wavy glass windows are also original – almost all were intact when the Mollett’s purchased the place.

If possible, ask to go up to the Widow’s Walk – accessible by ladder from the third floor. The views of the property and the land beyond are lovely.

Though it’s rather cold in October, I was not surprised to learn that the pool is the most popular spot on hot summer days.

My room, The Clabaugh Room in the Mansion, was a Ralph Lauren-esque envisioning of a swanky horse and hound retreat. As such,  it was complete with horse and hound wallpaper in the Carrera Marble bathroom, horse and hound paintings on deep blue walls, a large fireplace, carved four poster bed, fresh flowers, and other regal appointments.

Each of 40 rooms throughout the property, in fact, is distinctly decorated with Dort’s keen eye for design. 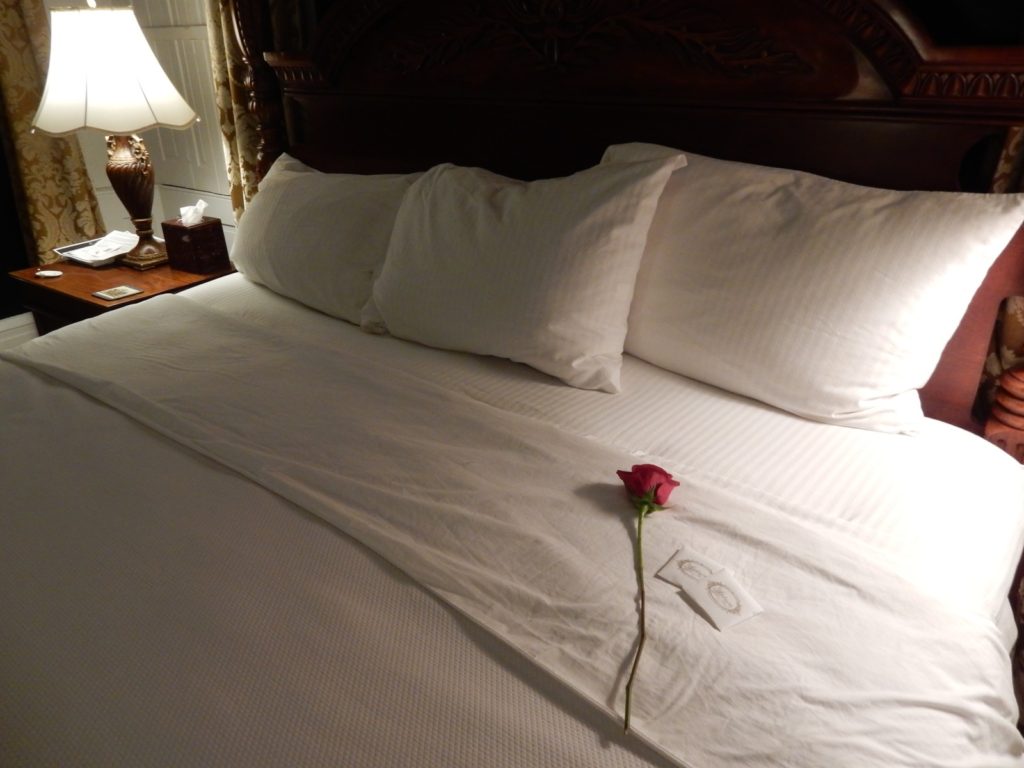 Turndown is elegant simplicity itself. One single red or pink rose on the soft white duvet. It’s both soothing and romantic at the same time.

In the morning, breakfast is a two-part affair. First just before 8am, a  tray with coffee and scrumptious muffins arrives via mini-butler, at your door.

And then, between 8:30 and 10:30 – the main event. Feast on frittata, quiche, yogurt, or grains, downstairs in the restaurant.

The Pickwick Pub is a great on-site spot to kick back. You’ll find rare brandies, scotch, bourbons, and lots of local wine and beer.

Plan at least one dinner in the Smokehouse Restaurant (situated in the home’s brick smokehouse, meat-hooks still hanging from wooden crossbeams).

Your meal begins, with drinks, passed appetizers, and some schmoozing, in one of the parlor rooms. Then, it’s off to the restaurant – part smokehouse, part summer kitchen. A cistern drain, lying horizontally across the brick floor, still courses with water on rainy days.

The menu, based on local farm availability, changes daily. The food is excellent. Suffice it to say that the chef knows what he’s doing, and the beautifully plated foie gras, soup, salad, and steak or fish you order will be a knockout.

Rooms from $205-$415 per night (depending on season, room, and day of week) include coffee/muffin delivery to room, made to order breakfast, afternoon tea, wi-fi and parking.