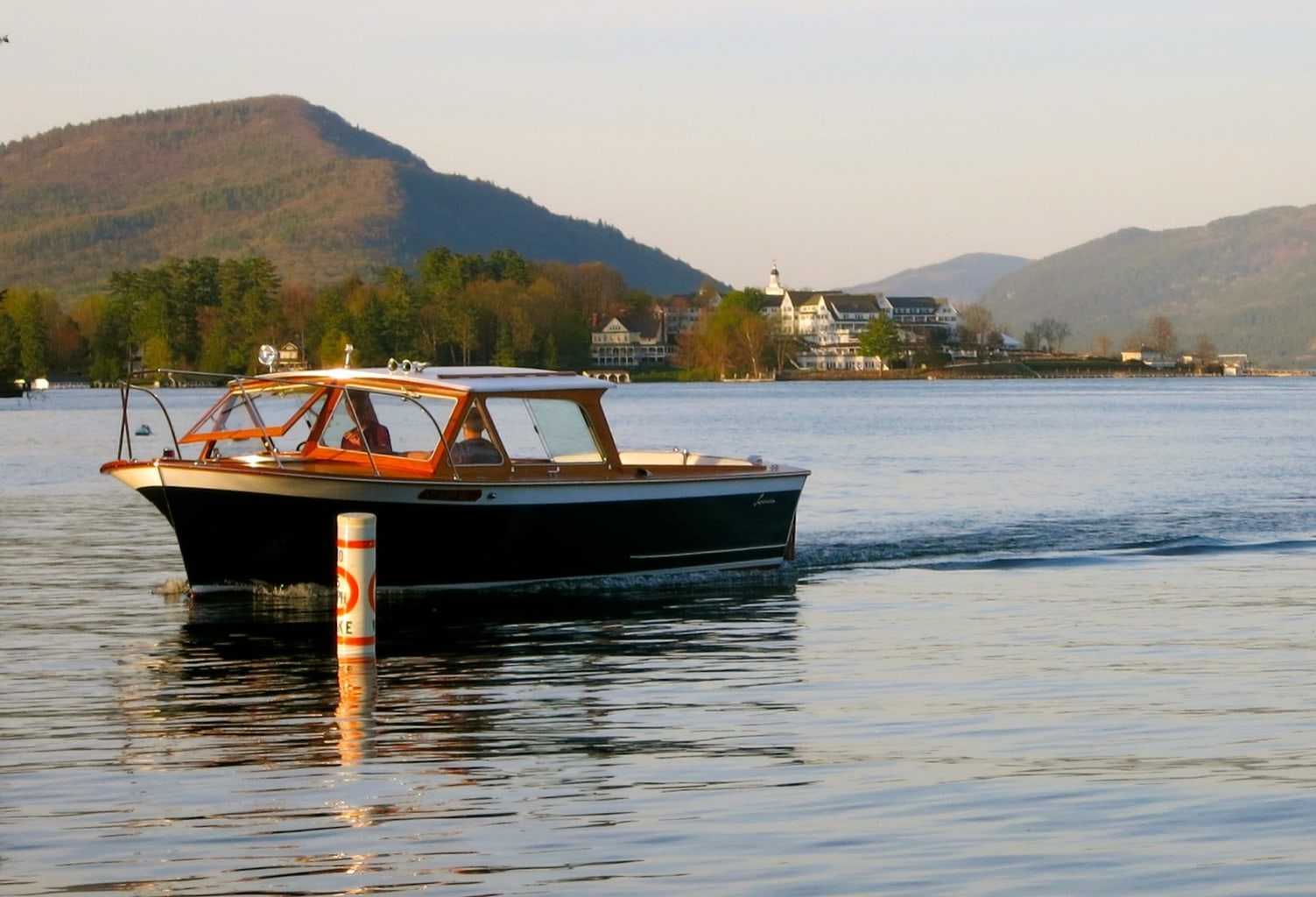 WHY GO: The lake. The Adirondacks. Camping on exquisite islands. From the more touristy, kitschy, Southern end of Lake George – Lake George Village itself – to the island-rich mid-lake Bolton Landing, the 32 mile long clear, clean, gorgeous Lake George has been drawing visitors and heat-weary city folk for over a hundred years.

You can go as rustic as a tent pitched on one of a few hundred small islands, or as grand as the venerable Sagamore Resort. Either way, a few days on Lake George is a beautiful thing.

Things to Do Around Lake George 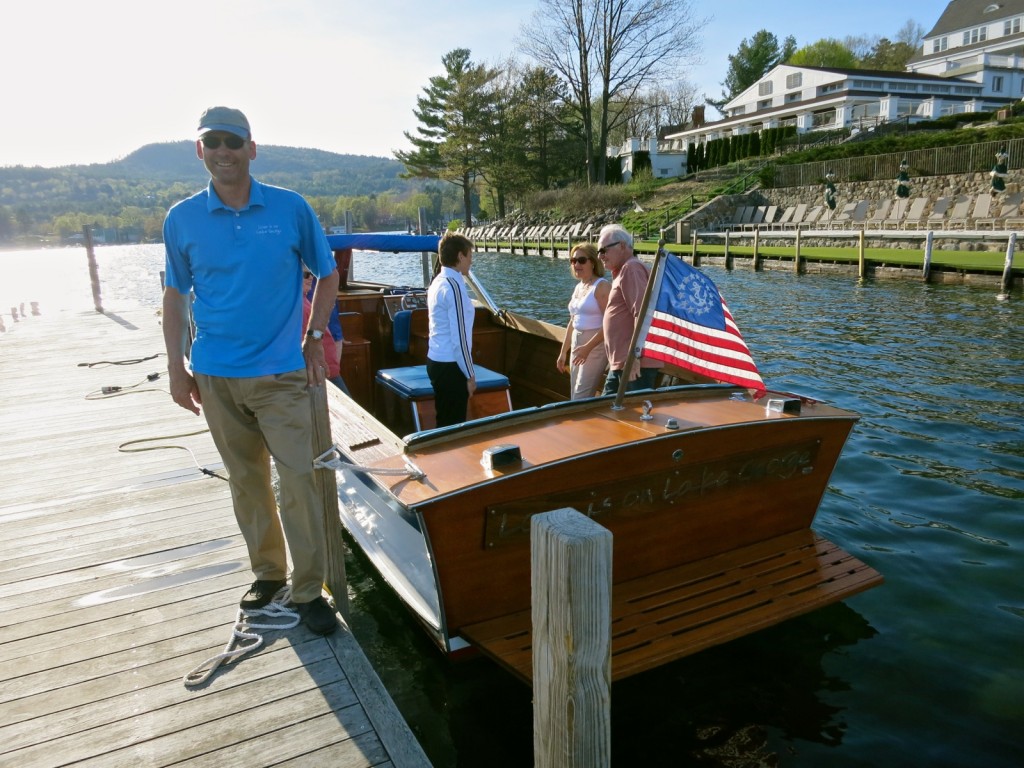 Tool around the island-studded midsection of Lake George on a 26 ft. burnished-wood Lyman with Ron and Kathy Miller. You can arrange to be picked up almost anywhere on the lake, and Ron will custom design a route specifically for your party (up to 6 people).

I took a one-hour sunset cruise on a stunningly beautiful and warm May afternoon, as Ron and his wife Kathy (who owns a custom-Lake-George-gift company called Love Is on Lake George) pointed out landmarks. 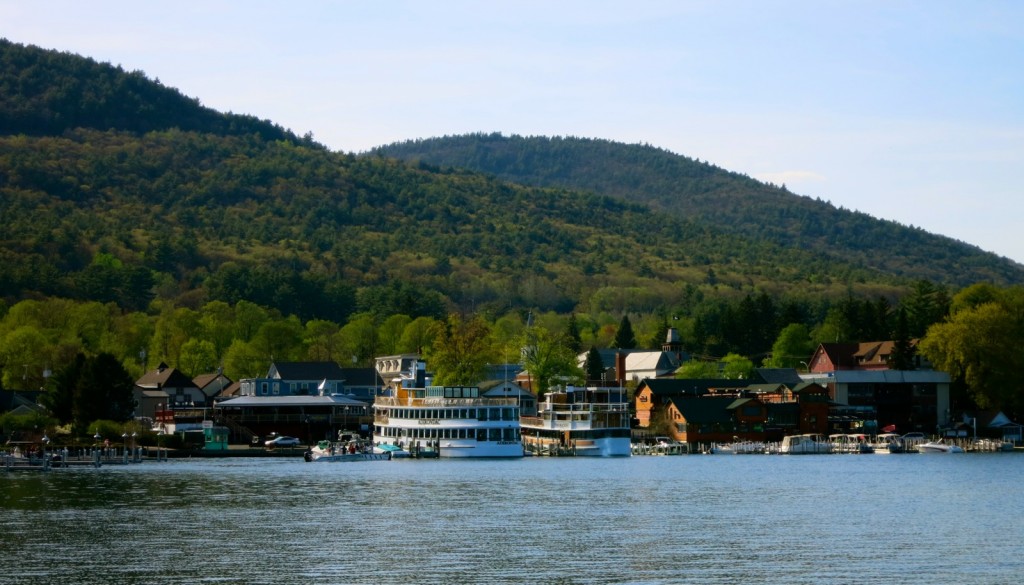 The 32 mile long Lake George, a narrow basin of almost unimaginably crystal-clear water, can be divided into three sections. The northernmost region, the Ticonderoga area, is most rustic, with not much development except for the age-old Silver Bay YMCA Conference and Spiritual Center. 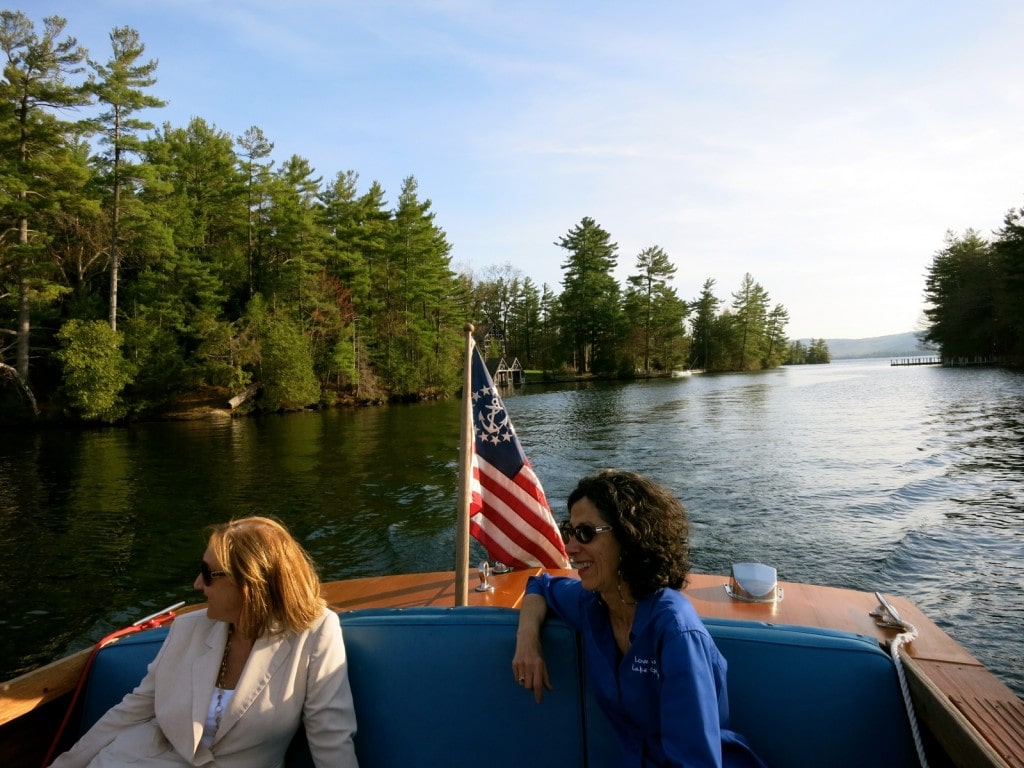 The middle portion of the lake, studded with over 100 islands ranging from the size of a Great Estate to the width of a single boulder, is where most of the larger lakefront homes – as well as The Sagamore Resort – are located.

And this is where Ron chose to cruise. We headed into the “Narrows” – watery paths through popular camping spots; state-owned islands that are outfitted with picnic tables, grills, outhouses and tiny docks. 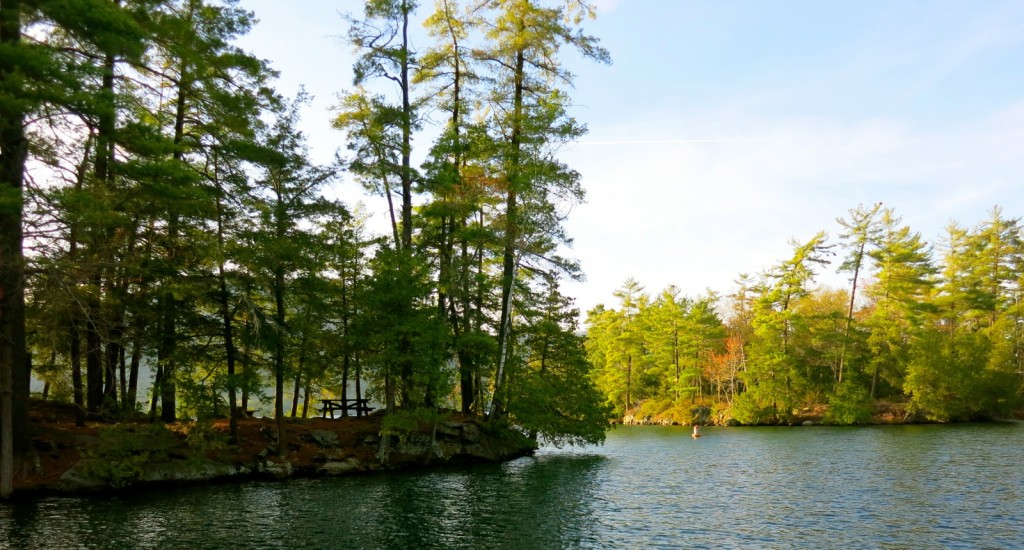 Ron piloted around Paradise Bay – a little swimming hole of a private cove, by Glen Island (“it’s a right of passage to get an ice-cream cone from the Ranger Station there”), and into Sandy Bay, where you can moor your own boat.

This is the most intimate and tranquil way to experience Lake George, and perfect for wedding or celebratory parties.  $260 for 1.5 hours, $450 for three hours – up to 6 guests. 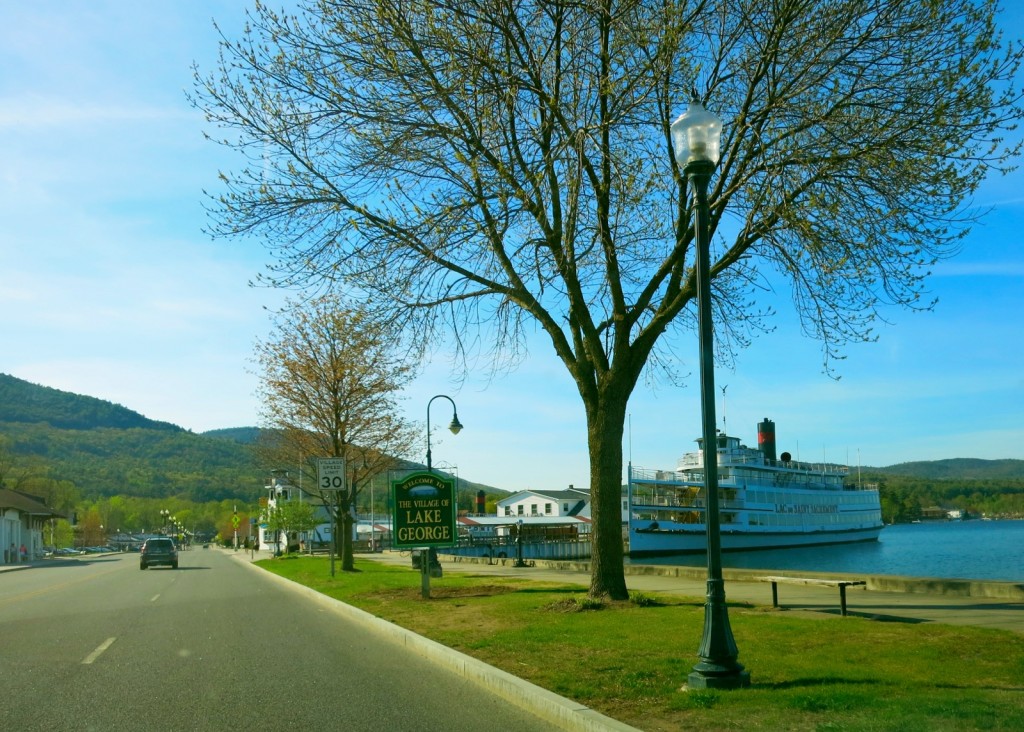 If you’re looking for a party atmosphere (Taco Tuesday Sails, Pizza Thursday Cruises, etc.) on a big paddle wheeler or steamer, book a spot on one of these big boys.

Choose from a selection of cruises, from all-day full-lake $31, to dinner cruises $26, to one hour jaunts $14.50. The Mini-Ha-Ha even offers Moonlight Cruises with live entertainment on Saturdays in season $25.

Don’t need a DC (Designated Captain) and want to avoid a bunch of tourists? Take your friends or family out tubing, water-skiing or for a cruise around the lake by renting a boat for a few hours or a day. Starts at $125 per hour, $385 per day, does not include fuel costs. 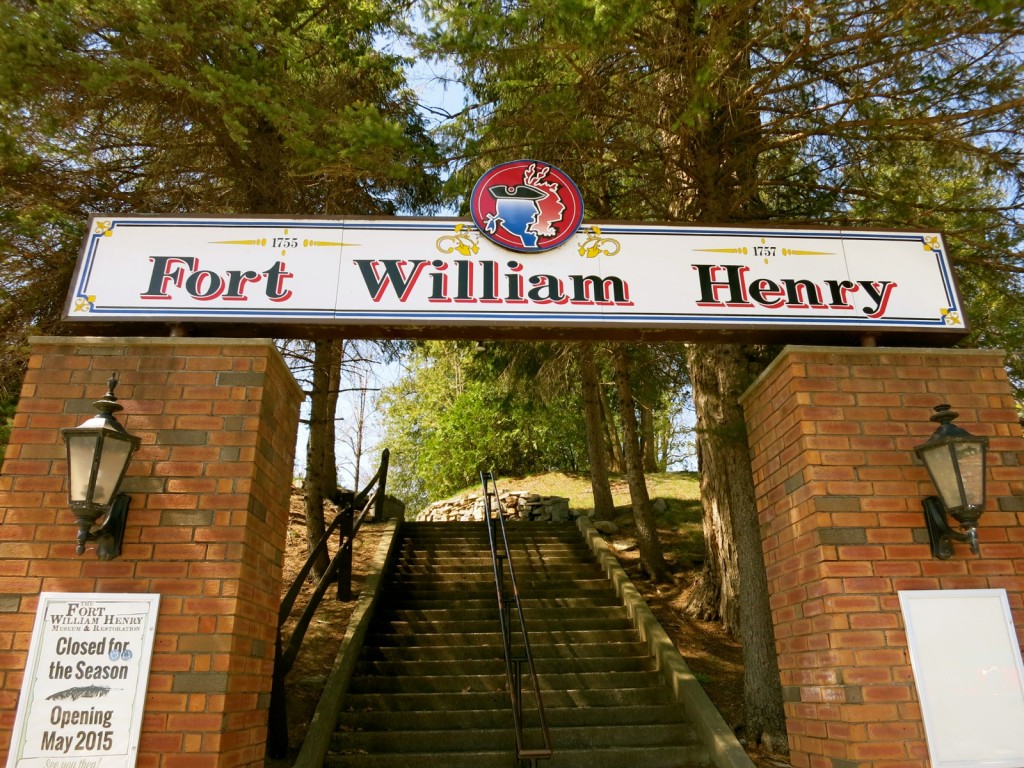 Built in 1755 and burned down by the French in 1757, this exact replica of Fort William Henry on its former footprint has been a favorite of families since opening in 1953.

Most thrilling, obviously, is mustering for the militia – with uniforms and guns and shooting demonstrations. But the whole complex, stocked with passionate costumed interpreters, is an excellent way to learn about US History. And have fun, too. 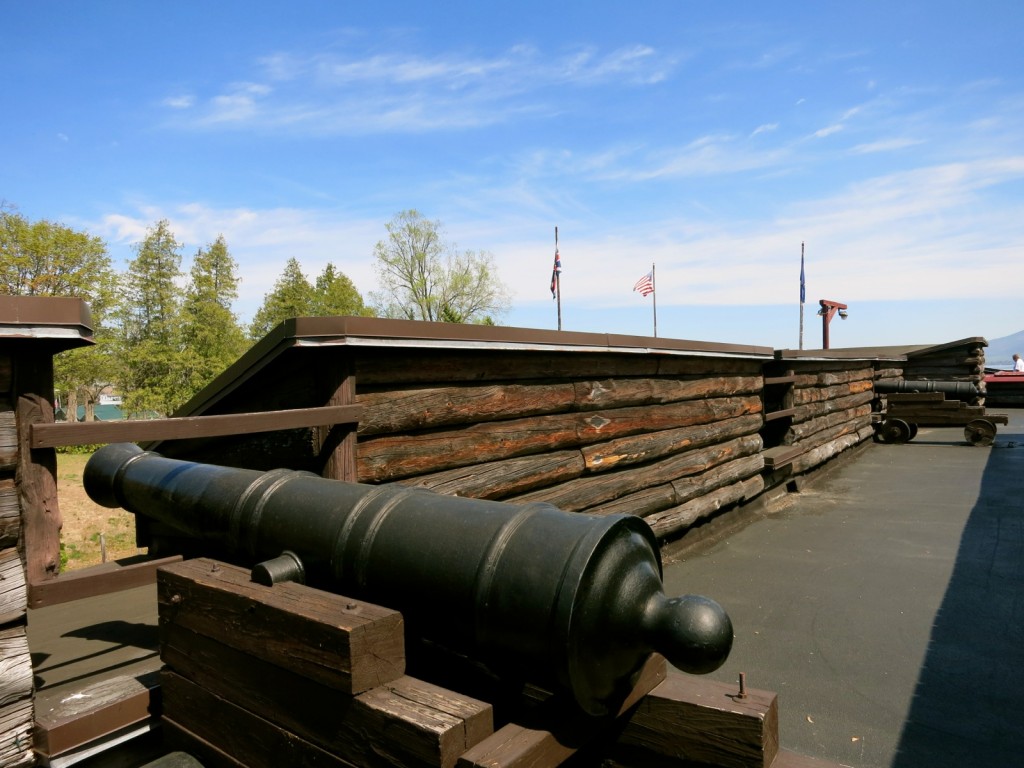 In the early 1700’s, this area of New York, so close to Canada, was a contested region, and as such disputed territory during the French and Indian War. The French claimed the lake and its environs as theirs – ever since 1646 when Father Isaac Joque set his eyes upon it and called it Lac Du Saint-Sacrement.

In 1755, Major General William Johnson, with a cadre of Colonial Volunteers and British regulars, built this fort at the Southern end of the lake, to protect British interests to the south.

The Fort, named after two grandsons of King George II, served as a launch point for raids and as a frontier hospital. It didn’t see much action until 1757 when 8,500 French soldiers burned it down. 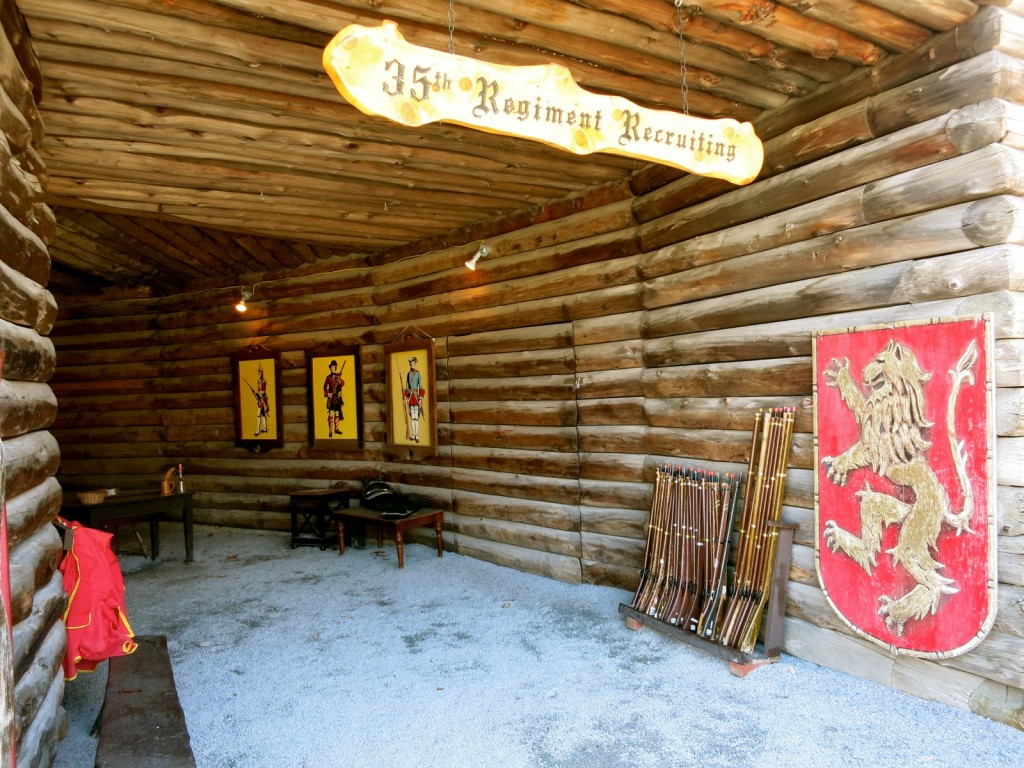 Take an engaging hour-long tour, with bomb toss and musket ball molding demonstrations. If you’ve got kids or grandkids, don’t leave before they are recruited into the 35th Regiment. Each child is issued enlistment papers, a wooden shilling, a waistcoat, three-cornered hat and musket, and then marched around the center of the Fort to fire their muskets. 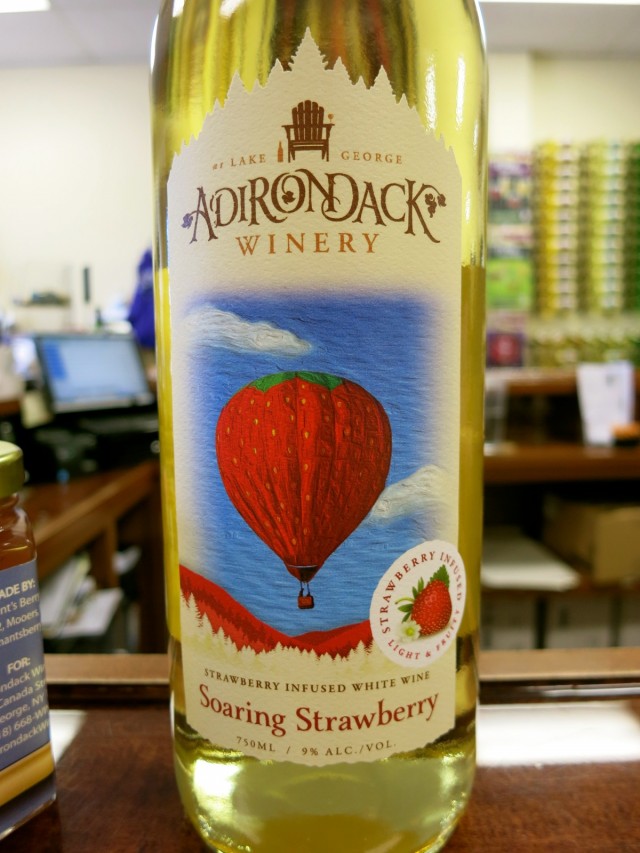 In the center of Lake George Village, this storefront tasting room is one of the most popular attractions in the area. Though it does not grow its own grapes (it outsources them from the Niagara Region), the Adirondack Winery does make its own wines. The sweet and satisfying “Calm After the Storm” – a dark chocolate orange port – is most popular. Try a tasting – seven samples cost just $7 and that includes a souvenir wine glass. 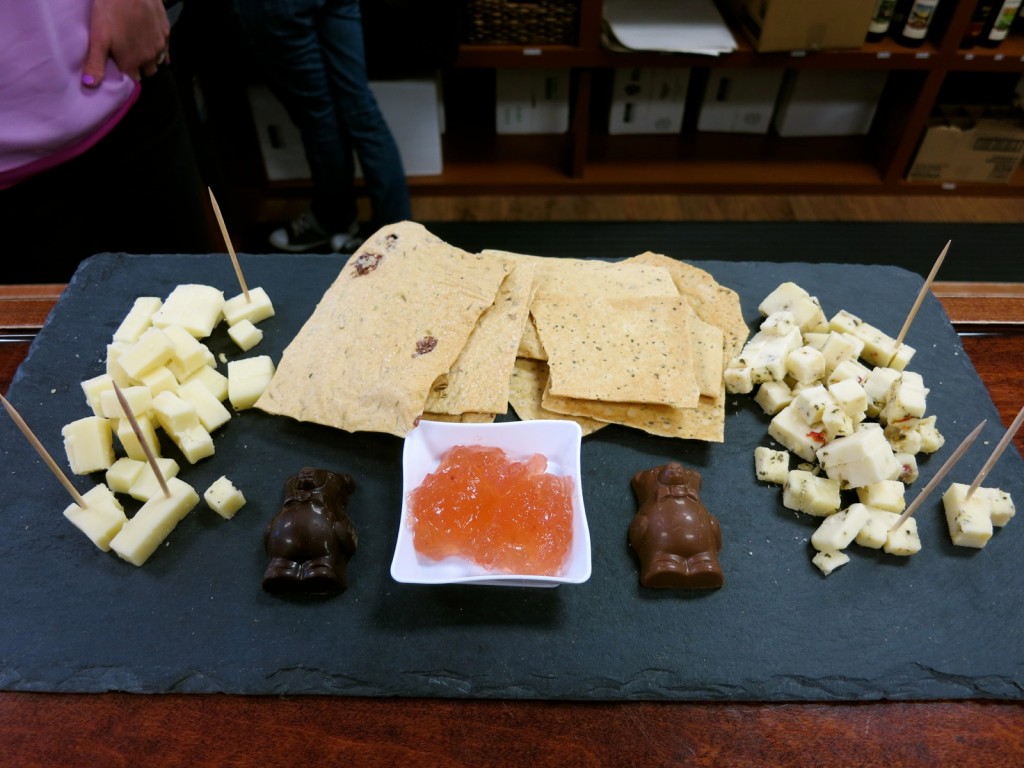 To complete your tasting, ask for a “Slate Plate” ($35, includes 7 wine tastings for 2). It’s a delicious and eye-catching presentation of Saratoga Crackers, cheeses from the Adirondack Cheese Co., local jelly from Surprenant’s Berry Farm, and little chocolate bears from Birnn Chocolate set out attractively on a slab of black slate.

Together with the wine, it’s a mini-feast celebrating the best of the region. A hit with Bachelorette and Bridal parties as well, Adirondack Winery will personalize wine labels for gifts or weddings. Open Mon-Thu: 11a-6p; Fri & Sat: 11a-7p; Sun: 11a-5p 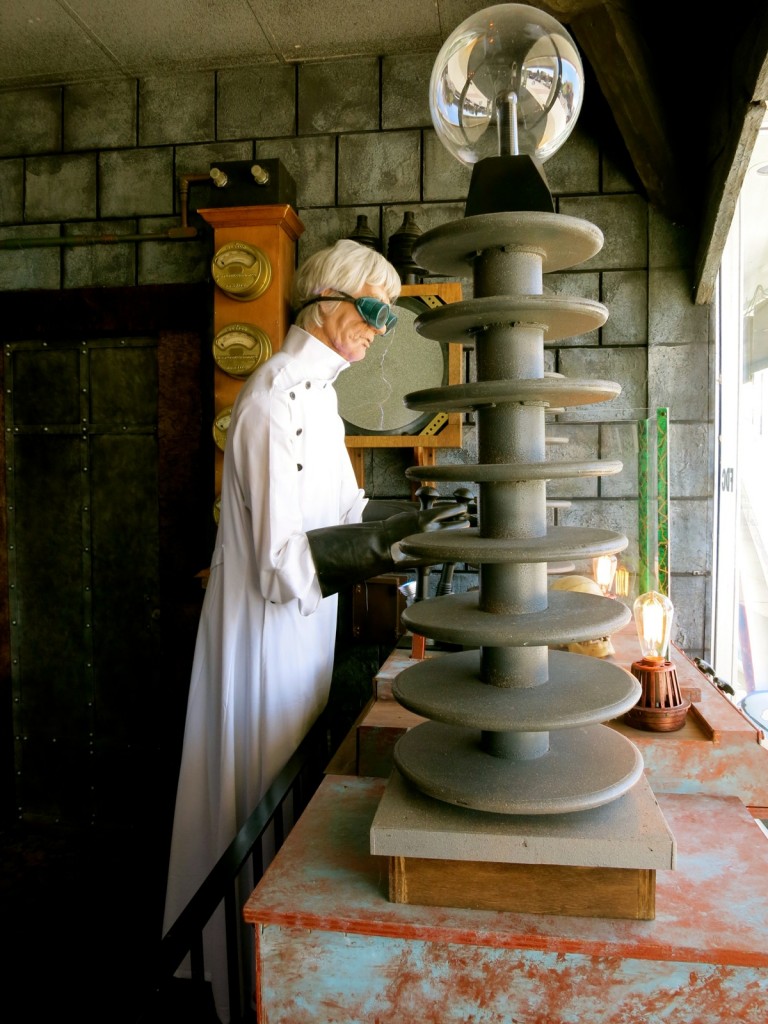 You know you want to. Yes, it’s got Frankenstein himself at the door, the mad scientist at work in the window. This place has been here for decades and shows no sign of aging. $10.75 adults, $6 kids. Open daily in season, weekdays 10-6, weekends until 9pm, 10pm, or 11pm. Check website for times. 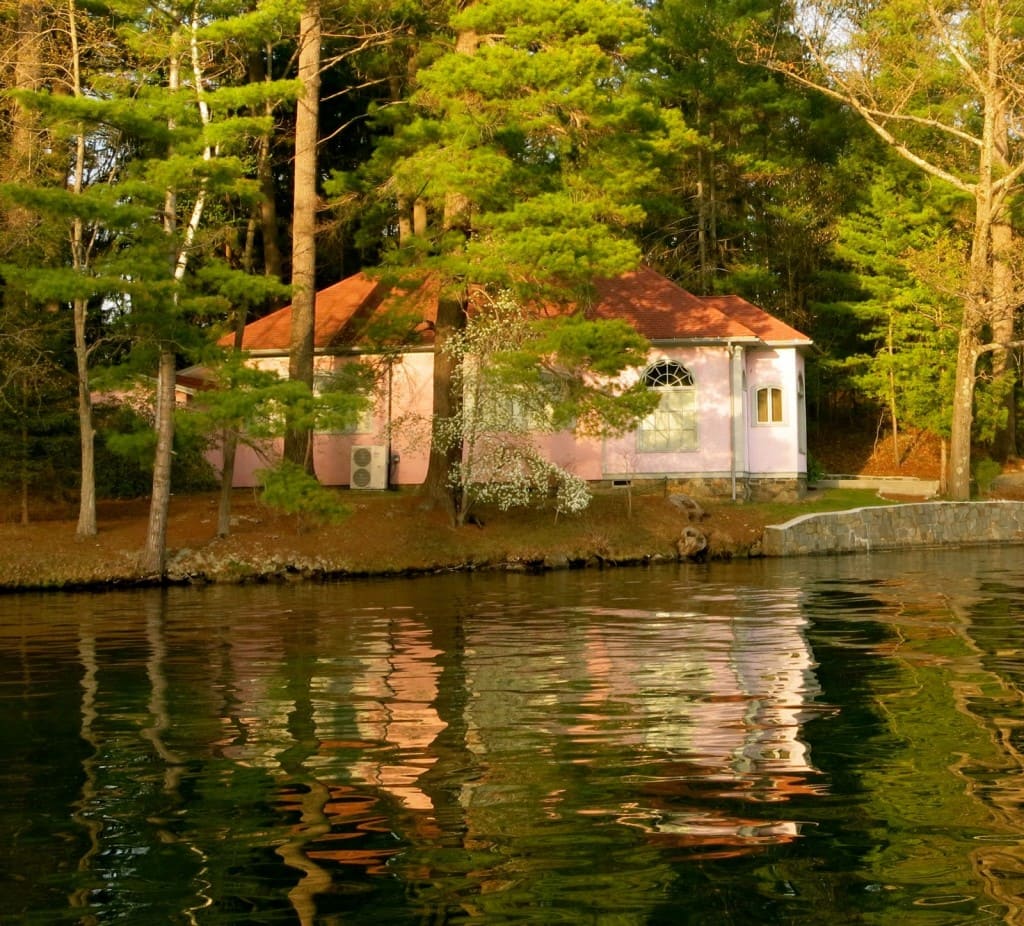 The studio of famed opera diva, Marcella Sembrich, who sang with the Met in its initial season in 1883, is open as a costume and artifact museum and intimate concert venue.

You can literally rub elbows with some of the world’s greatest opera singers when they perform in this adorable pink studio overlooking beautiful Lake George. Open daily June 15-Sept 15, 10-12:30 and 2-5pm. Free but donations appreciated.

Lake George has the requisite theme parks and playgrounds for children. See Rex (or Lightening), the “Nation’s Only Diving Horse” at the perfect for tots Magic Forest. Do some water tricks yourself at Water Slide World. Or experience all 135 rides at Six Flags Great Escape Theme Park. All open in season only.

Where to Eat on Lake George 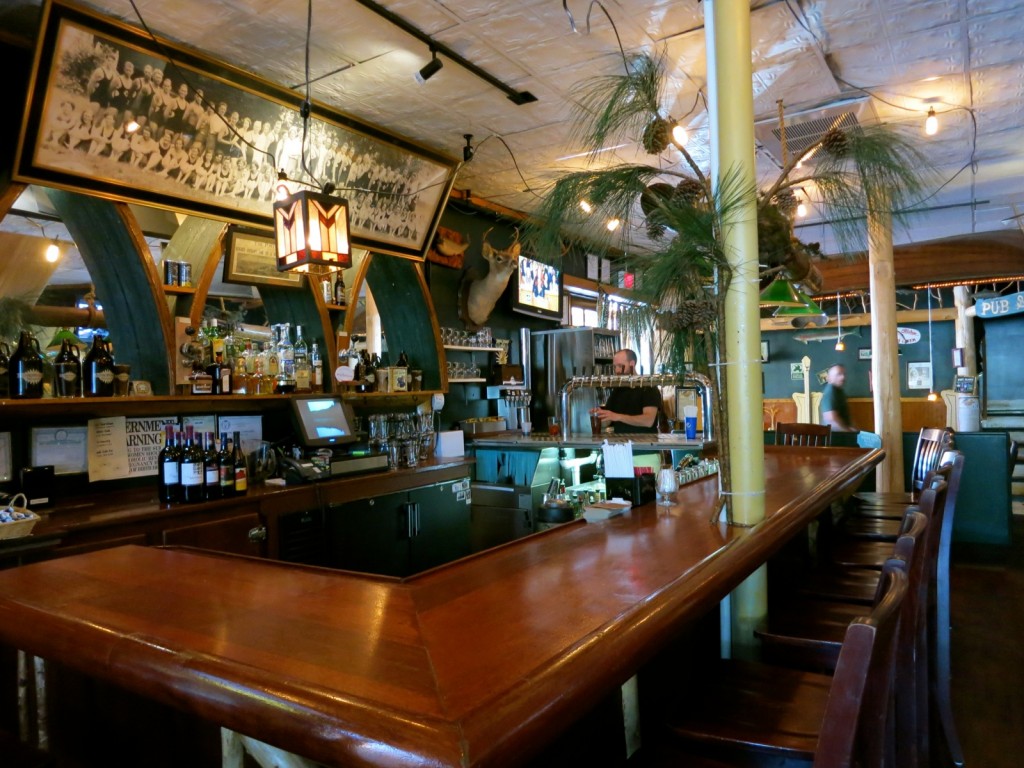 Food is good, beer is awesome at this oft-times raucous craft brewery in the center of Lake George Village. Go for Eggplant Fries ($9.99) or Fried Cheese Curds ($8.99) and wash it down with one of Adirondack’s signature brews – Bear Naked or Iroquois Pale Ale. 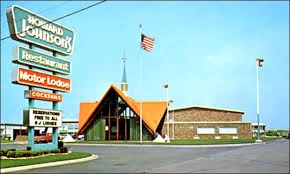 This is the height of nostalgia – the  last remaining orange-roof Howard Johnson’s restaurant in the country. For those who grew up road tripping around the United States, the iconic HoJo’s roof was a sign of hospitality, of burgers, hot dogs and fries, topped off with little ice-cream sundaes that would fuel you for the drive ahead.

Recently re-opened, this Lake George Howard Johnson’s was where a young Rachel Ray donned an apron and served sodas and shakes from the fountain. The food is nowhere near haute – but it will bring you back in time in this timeless place.

The Boathouse, Algonquin and Bistro Le Roux for fine dining. The Log Jam for rustic ambiance.

Where to Stay on Lake George 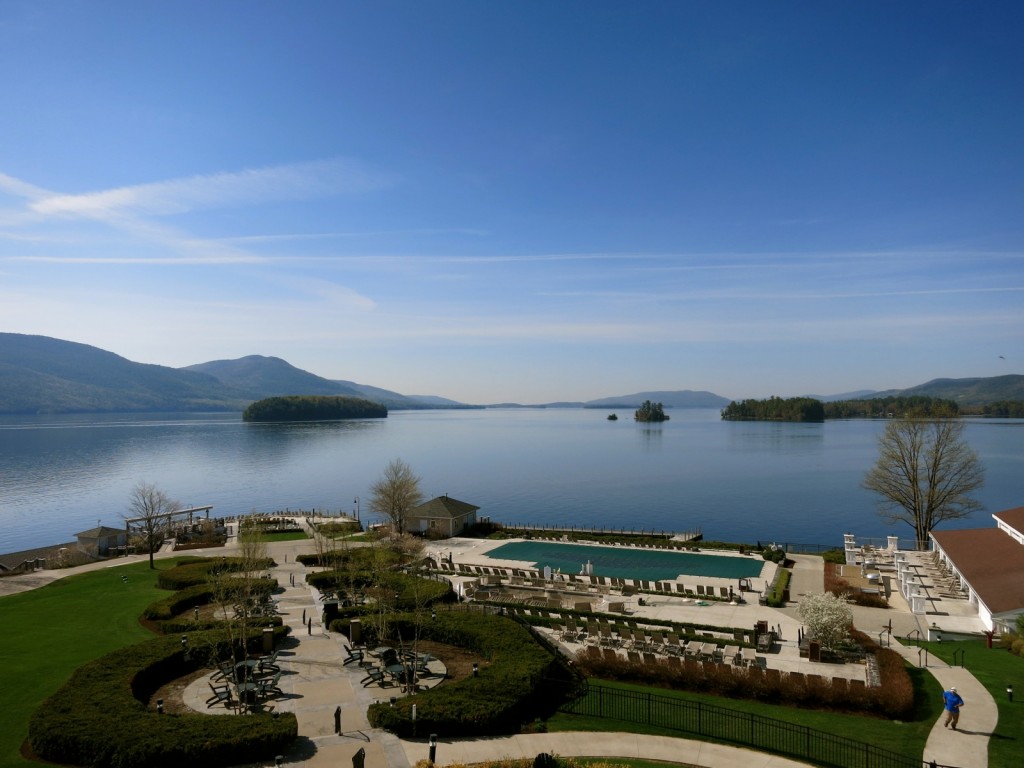 A Maven Favorite! With new owners in 2009, The Sagamore is luxurious once again after a recent $150 million renovation. Off-season rates range from $200-$850 (for a two-bedroom condo) per night. See the complete Maven Write up of The Sagamore Resort here.

If you wish to stay on Millionaire Row in a stone lakeside mansion, this beautiful B&B is a perfect hideaway. Rates $270-$485 per night.

There are so many lakeside motels and lodges on Lake George, its tough to know which ones are “the best.” For the price, Canoe Island Lodge comes close – say many local residents.

Family run and clean, Canoe Island is a friendly place with lots of repeat customers. It’s also an “all-inclusive” resort – all meals and activities (waterskiing, etc) are included. Prices range from $147-$207 per adult per day, kids $70 per day, depending on accommodations chosen. 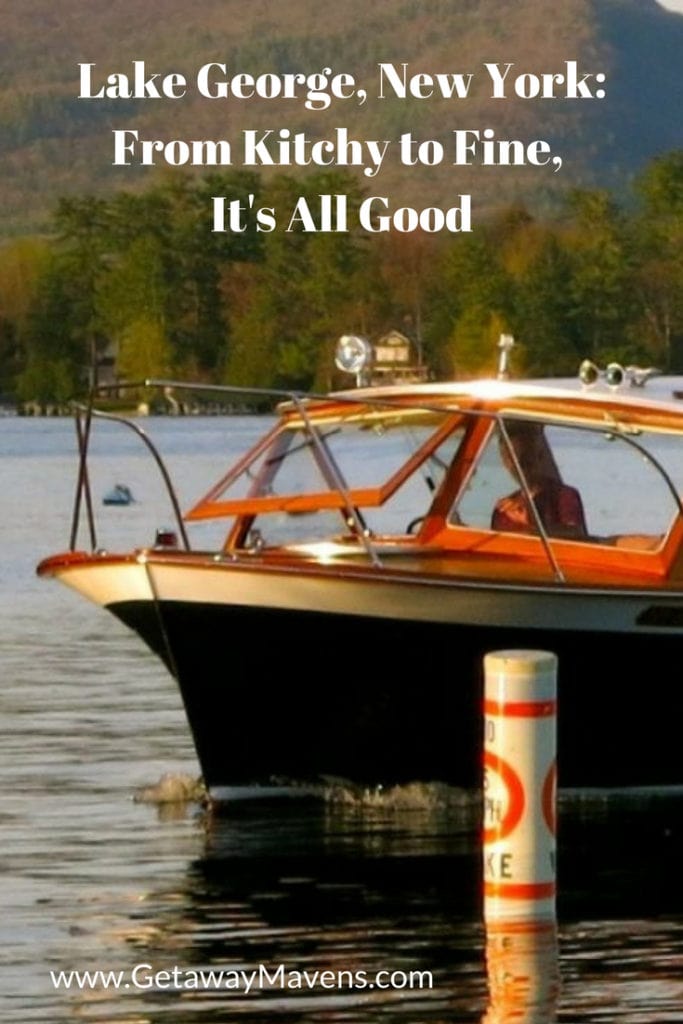 2 thoughts on “Lake George NY: From Kitschy to Fine, It’s All Good”