Last Updated on December 14, 2020 by Malerie Yolen-Cohen and Sandra Foyt

WHY GO: A decisive battle of the Civil War, and the place where President Abraham Lincoln, in his Gettysburg Address, chose to commemorate the dead while attempting to reunify a nation, Gettysburg PA tells the story of our county’s bitter divide better than any other site in the country.

Millions of people from all over the world visit this town of just 8,000 residents each year. But to avoid the crowds, come off season. Gettysburg is not exactly an “offbeat” escape, but there are uncommon ways to approach this history, and we tell you how.

Things To Do in Gettysburg PA

Begin here to get an overview of the Battle of Gettysburg.  Purchase a ticket for the Cyclorama, Film and Museum, then plan to spend at least two to three hours.

Start with the movie A New Birth of Freedom narrated by Morgan Freeman (whose surname could not be more apt for this purpose). In the 1860’s, Southern States seceded over the issue of slavery and became the “Confederate States of America.” Gettysburg was a turning point in the war that followed.

The Union Army (North) won the decisive battle against General Robert E. Lee’s Confederate Army but, as you’ll discover, only after three days of horrendous and high-casualty combat that could have gone either way. From the first shot on July 1, 1863 to the last on July 3, 1863, over fifty one thousand men were killed, wounded or went missing.

After the movie, you’ll take an escalator to the Cycolrama – the “Largest Painting in the US,” at 42 ft. high, 377 ft. in circumference, and completed in 1884.  Restored and reopened in 2008, it remains a thrilling depiction of the Battle of Gettysburg, where you can truly imagine you are “standing behind Union lines on Cemetery Ridge.” Visitors Center open daily April – October 8am-6pm, November – March 9am-5pm, $15. 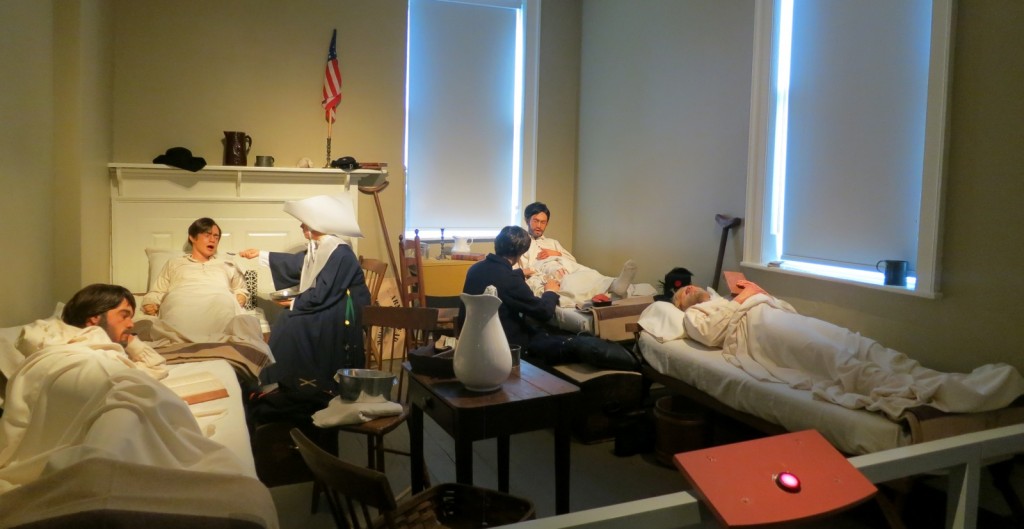 The Seminary Ridge Museum is located within Schmucker Hall, a building that served as both field operations base and hospital during the Battle of Gettysburg – and it has one incredible draw.

You can climb to the open-air cupola at the top of the building just as Union General John Buford did on the evening of June 30, 1863 when he saw the campfires of Confederate soldiers nearby, inadvertently warning the Union Army about their approach.

Seminary Ridge Museum is the only institution that focuses on the First Day of the Battle, caring for the wounded, and the role of Faith and Freedom during and after the War. Warning – some dioramas and images are jarringly gruesome, so use discretion when bringing children.  $11 for Museum, $31 for Museum and Cupola Tour. Reservations necessary. 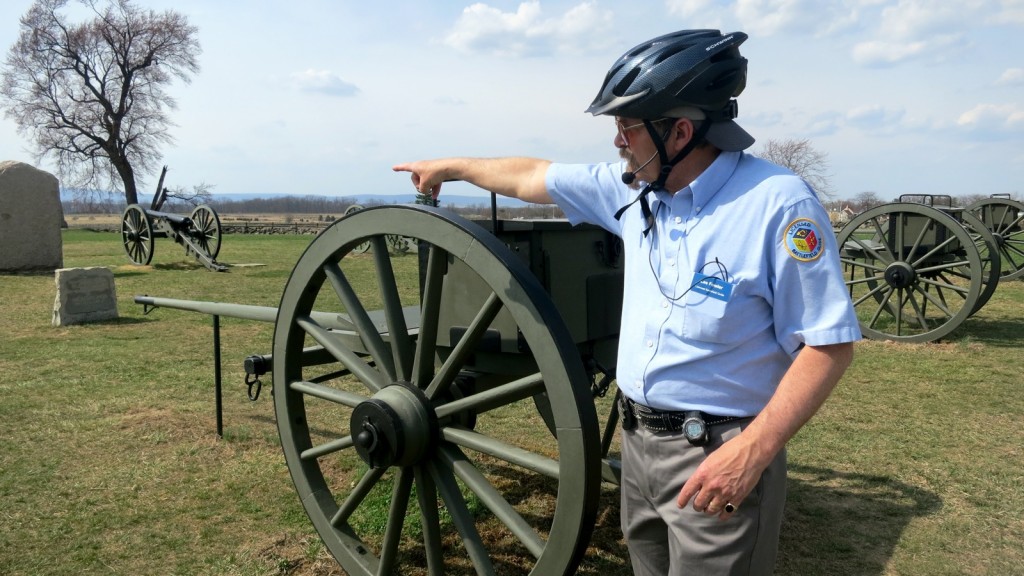 There are plenty of ways to “do” the Gettysburg Battlefield, including the crowd favorite big bus tour. But the best way to really understand troop movements, skirmishes, and the individual players on a human, sometimes humorous, most times harrowing level is through the wind-on-your-face, out in the elements Segway Tour.

You’ll spend about half an hour getting familiar with this unique transportation device and then, you’re off, with a Segway staff member AND your very own licensed battlefield guide who narrates through Bluetooth headsets as you move along.

Stopping frequently, you can ask questions, get your bearings and learn awesome trivia including the fact that on the final day of the conflict, during the two hours of Pickett’s Charge, 11,000 rounds of cannon-fire created the loudest sustained noise ever heard (before or since) in the Western Hemisphere – a noise that was detected 80 miles away in Washington, DC.  $70 per person for three-hour tour, includes National Park guide and refreshments. 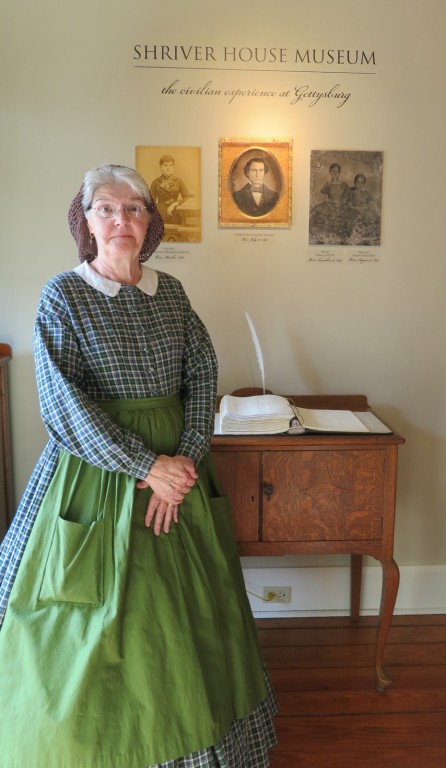 Most tourists visit Gettysburg to see where the battle occurred, oblivious to the fact that there was a town here, too. Consider the Civil War through its effect on one family; the Shriver’s.

I won’t give anything away, but suffice it to say that the room-to-room narration has twists and turns and involves Confederate troops, forensic reports and curious artifacts found in the house and walls.

It was said that after the battle, with hundreds lying dead and amputated limbs decomposing in the streets, the odor  emanating from downtown Gettysburg was so horrendous it could be smelled in Harrisburg 30 miles away. Costumed-guide led tours $9.50, April 1-October 31, Sun-Thurs 10am-5pm, Fri., Sat. 10am-6pm. Check website for hours at other times of year. 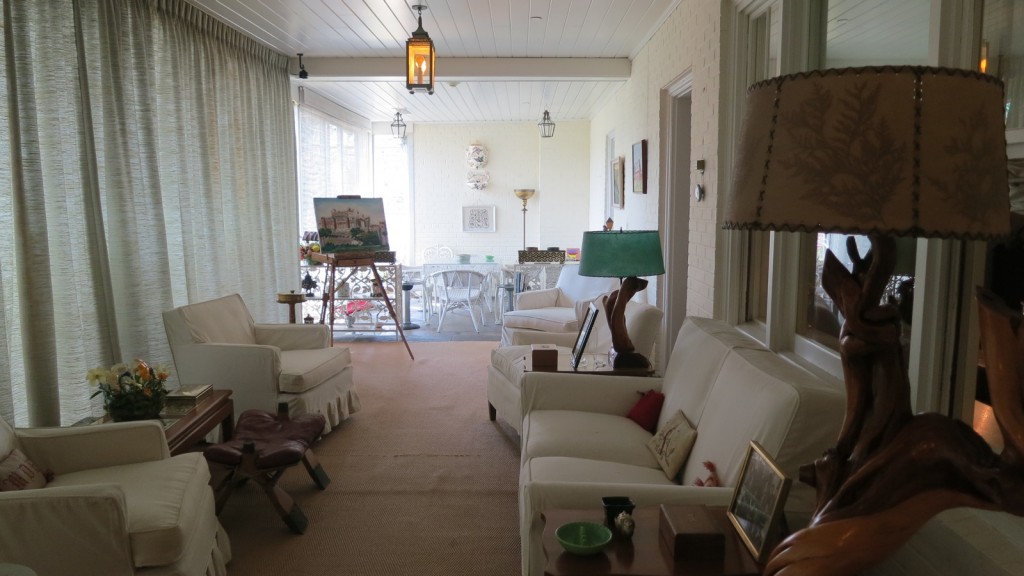 Dwight Eisenhower was the first president to fly in a helicopter. Interestingly, quite a few of those flights were between his very first private home in Gettysburg, PA and Camp David just 20 miles away.

When Eisenhower tired of formality and wanted to “take the measure” of a World Leader like Charles De Gaulle or Nikita Khrushchev, he would escort them to his Gettysburg Dairy barn or porch for some R&R.

You’ll learn all about the General’s habits and hear insider stories on this fascinating tour of the home and grounds of our  34th President. $9 pp. Tours of farm, grounds and house originate at the Gettysburg National Park Visitors Center. Open daily March-October. Shuttles every hour from 9:30am-3:30pm. October 27 – December 23: Shuttles 11 a.m. & 2 p.m. Thurs. – Sun.​

Though its a no frills Formica table type place, Dunlap’s is like Cheers for the local Senior Men’s Club. If you’re a frequent customer of a certain age, it seems everyone knows your name. Prices are small-town low. Just $3.49 gets you two eggs any way, home-fries, toast AND coffee. 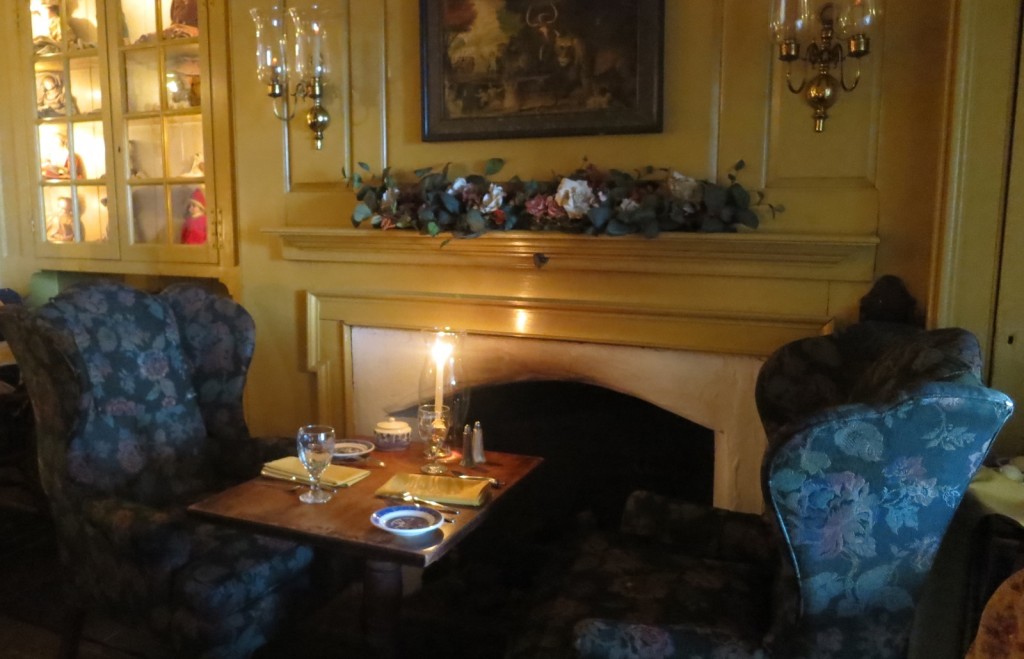 Dine by candlelight in Alexander Dobbin’s library, bedrooms, parlor, and root cellar. It’s an atmospheric place enhanced by excellently prepared food. The “Colonial Era” menu is fun reading; separated into “Of Soups,” “Of Flesh,” “Of Fish,” with Colonial s’s that look like f’s.

Start with the “King’s Onion Soup” ($6). It’s “Freshly made with beef and a variety of cheefes on top, baked in a ‘quick’ oven to a succulent  tenderness, and served up hot and delicious in a tureen.”

Garryowen is of the most popular drinking spots in Gettysburg. Walls are plastered with Police and Fire Department patches from all over the country. You can find traditional Bangers and Mash, Shepherds Pie, and a touch of haute-Irish pub food. Try the toothsome Smoked Salmon Bruschetta; lox on garlic crostini drizzled with sweet balsamic vinegar. It’s a sweet, salty, tangy trifecta of tastes. 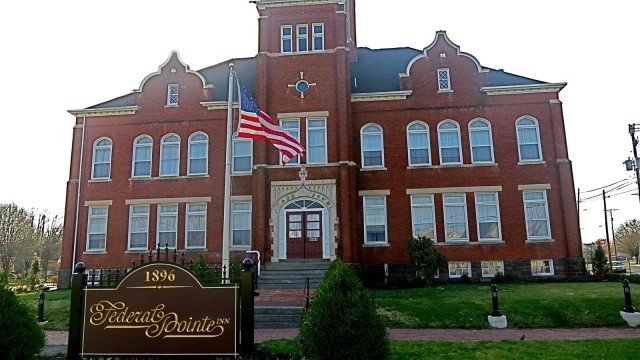 The coolest lodging in town, Federal Pointe Inn was originally built in 1896 as Gettysburg’s first High School. Gutted and renovated into boutique-luxuriousness, there are 18 elegant high-ceiling guest-rooms on two floors.

Stay in the former Boys or Girls bathrooms. These are floodlit second-floor corner rooms with 12 foot ceilings, granite bathrooms, and sinfully soft bedding. Owner Peter Monahan kept some blackboards, all the wainscoting, and installed Civil War oil portraits and stately Federalist accents. Rates from $99 to $225 and up during high season.

Within two fine homes right in town and accessible to everything, charming rooms are dressed in antiques and floral prints. Rooms from $119-$219 include hot breakfast. 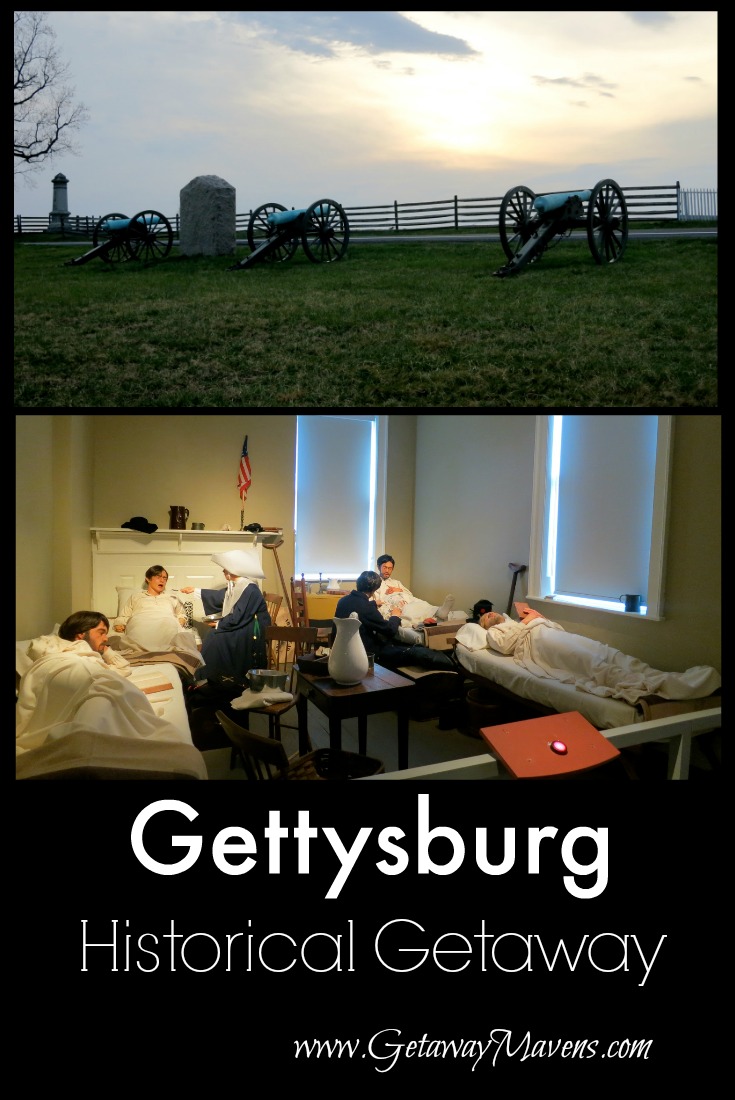