Home » Connecticut » Hartford CT: A Capitol Idea For A Getaway

WHY GO: If you’ve ever been curious about why Connecticut is called “The Constitution State,” Hartford CT is the best place to find out. The groundwork for the US Constitution was laid right here – in a 1639 sermon, The Fundamental Orders, by the Reverend Thomas Hooker – calling for a representative government in Connecticut.

Home to the State Capitol, Mark Twain, Harriet Beecher-Stowe, a state-of-the-art Science Center, America’s first public Art Museum, and a plethora of great restaurants, there’s more to this Insurance hub than actuarial tables.  Come for the business, stay for the pleasure on this Constitutional Getaway.

Things to Do in Hartford CT 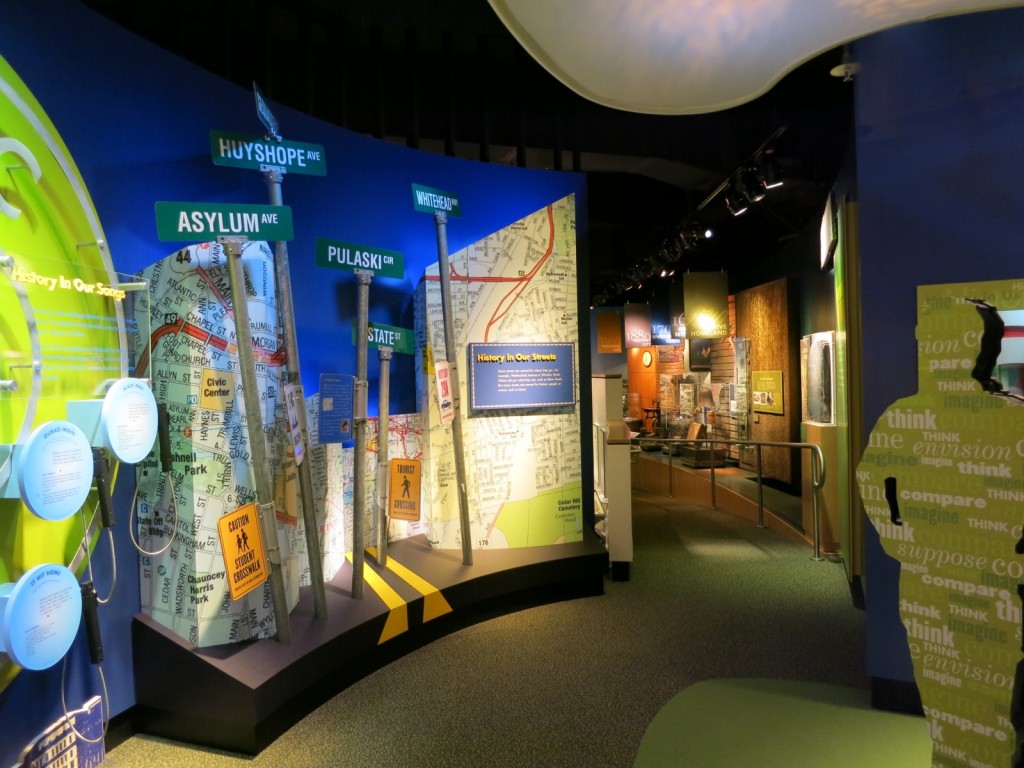 This is the only place on earth where you can see Mark Twain’s bicycle, a large Gilbert Stewart portrait of George Washington, rooms in which the Amistad captives were tried, and a two-headed calf all in the same building.

Dwarfed by insurance skyscrapers that surround it, the Old State House was one of two State Capitol buildings in Connecticut (alternating with New Haven) before it became Hartford City Hall in 1878 to 1913.

In 1996, the State House was renovated to include a wonderful interactive exhibit: History Is All Around Us. You’ll find out how Asylum Ave. got its name. Ok, I’ll tell you: it was named after the Asylum for the Deaf and Dumb, now American School for the Deaf.

From Native American settlement to a colonial era town, as a factory city, then a national insurance hub – the history of Hartford unspools in an entertaining way.

Upstairs, tour the old Court Room where the Amistad slaves and abolitionist Prudence Crandall were tried. Circus master, PT Barnum, served in the CT House of Representatives, which met in these chambers.

Maven Favorite Museum of Curiosities is also on the second floor. Though it’s stocked with Victorian-era oddities, like “newly-discovered” creatures from the China Seas, it also features a Barnum/Ripley esque taxidermied Two Headed Calf – the most photographed curiosity here.

Statues of state heroes Prudence Crandall (who was arrested for accepting an African American girl into her private school in 1832), and Nathan “I regret that I have but one life to lose for my country” Hale stand proudly in these gilded-age halls.

Check out the fountain beneath the staircase used to fill buckets of water for the legislator’s horses hitched to the back porch. The fanciful Victorian-era interior, ornately painted and carved, is worth seeing if only for a few minutes. Guided tours are also available and free, on the hour 9:15-1:15 Mon-Fri.

At nine stories, the LEED Certified green Science Center looms over the Hartford waterfront. Its top floor provides incredible views of the Connecticut River and beyond. But that’s not why you should visit.

Of course, museums like this are the key to making science entertaining and relevant for the newest generations. But you don’t have to be a kid to have a blast here. Step inside a Hurricane Force wind tunnel – where 80MPH gusts whip your eyelashes around. 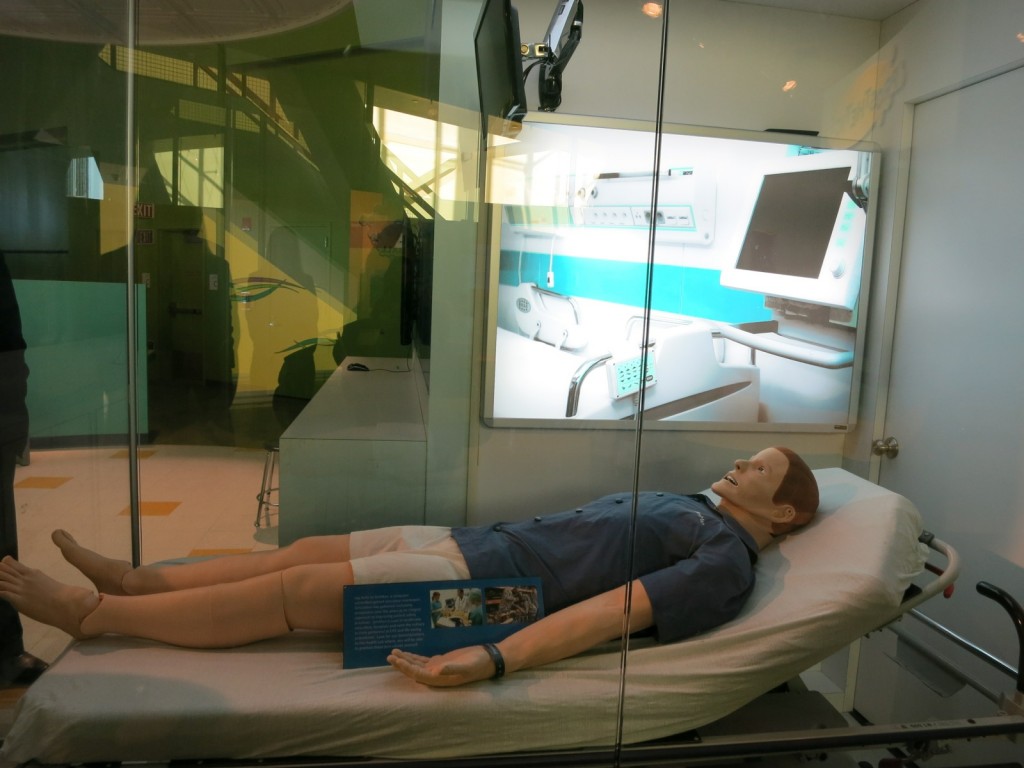 Give the lifelike “Sim Man” a heart attack or allergies, and see how he reacts: disconcertingly, his eyes swell up as an allergic reaction. Try your skill on the “Downhill Dash” ski racing arcade game, program a 1 ½ ft tall humanoid robot to dance, and create the new big thing in the “Invention, Dimension and Explorer” Exhibit.

Race sailboats, play basketball with a computer, scream your head off in a soundproof room and indulge in other Mad Scientist adventures. Hundreds of games, displays and state of the art experiments will keep you happy for hours, if not days. Open 10am-5pm Tues-Sunday, $24.95 adult, $16.95 kids. 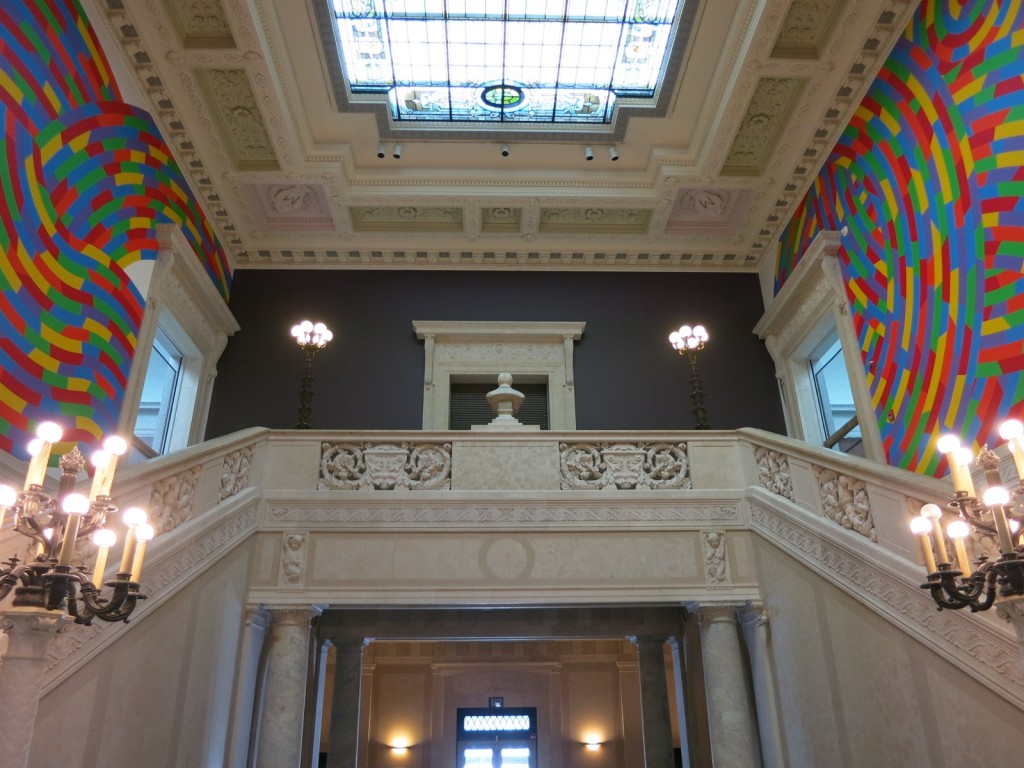 And with over 50,000 pieces in a variety of galleries, the Wadsworth is a terrific place to wander and discover those that call to you. If Sol LeWitt is your man, you’re in luck, as his murals grace several soaring spaces throughout the museum.

The “Lady” in John Singleton Copley’s 1780 Portrait of a Lady bears a striking resemblance to Dame Maggie Smith as the Dowager Countess of Grantham on Downton Abby. I could have also lingered longer around the massive John Trumbull oils – especially The Signing of the Declaration of Independence and The Battle Of Bunker Hill. But countless other galleries beckoned.

Sadly, I left without knowing the story behind Jonathan Borofsky’s 1984 “Half A Sailboat Painting,” which is literally, half an oil painting of a sailboat. $10 adults, kids under 12 free, Wed-Fri 11-5, Sat/Sun 10-5.

It’s incredible to think that a couple of decades ago, Samuel Clemens’s (pen name, Mark Twain) Hartford home was in danger of financial collapse. Now, no less than National Geographic declares the Mark Twain House one of 10 Best Historic Homes worldwide. (In the US, only the Twain House, Monticello and Mount Vernon made the cut).

Subsequently, Twain lovers flock here by the tens of thousands. After the Southern humorist married Olivia Langdon, a Yankee girl from Rochester, NY in 1870, they moved to Hartford to be near Twain’s publisher. Twain wrote most of his best known books –  Tom Sawyer, Huckleberry Finn, The Prince and the Pauper, and A Connecticut Yankee in King Arthur’s Court – during his time here from 1874-1891.

A tour of the 11,500 square foot home takes you through many of the 25 rooms. The first floor, designed by Tiffany to suggest Moroccan, Indian, Japanese and jungle themes, is arguably the most dramatic.

Learn about the joys and tragedies in Twain’s life, why he might have been considered Best Dad Ever to his three beloved daughters, and how he would routinely rile up his prudish wife each evening as she edited his writing by the fireplace.

Livy nicknamed her husband “Youth,” because he always acted like a kid. Twain called his darling wife “Gravity,” as she kept his feet on the ground.

A lover of gadgets and an “early adopter,” Twain installed central heating, purchased one of the first home telephones, and rigged up a bedside gas reading lamp using a rubber tube that extended from his gaslight chandelier (and still set up this way).

My favorite room is on the 3rd floor, where Twain played billiards with friends. I can just imagine the trash talk around the pool table: the great writer’s presence is still palpable there.

According to some staff accounts, in fact, visitors report the smell of cigar smoke, which has on occasion, mysteriously set off the fire alarm. By timed-ticket Tour only, adults $20, kids $11, Open Wed-Mon 10:30-5:30.  90-minute Stowe-Twain House combo tour $23 adult, $15 kids. 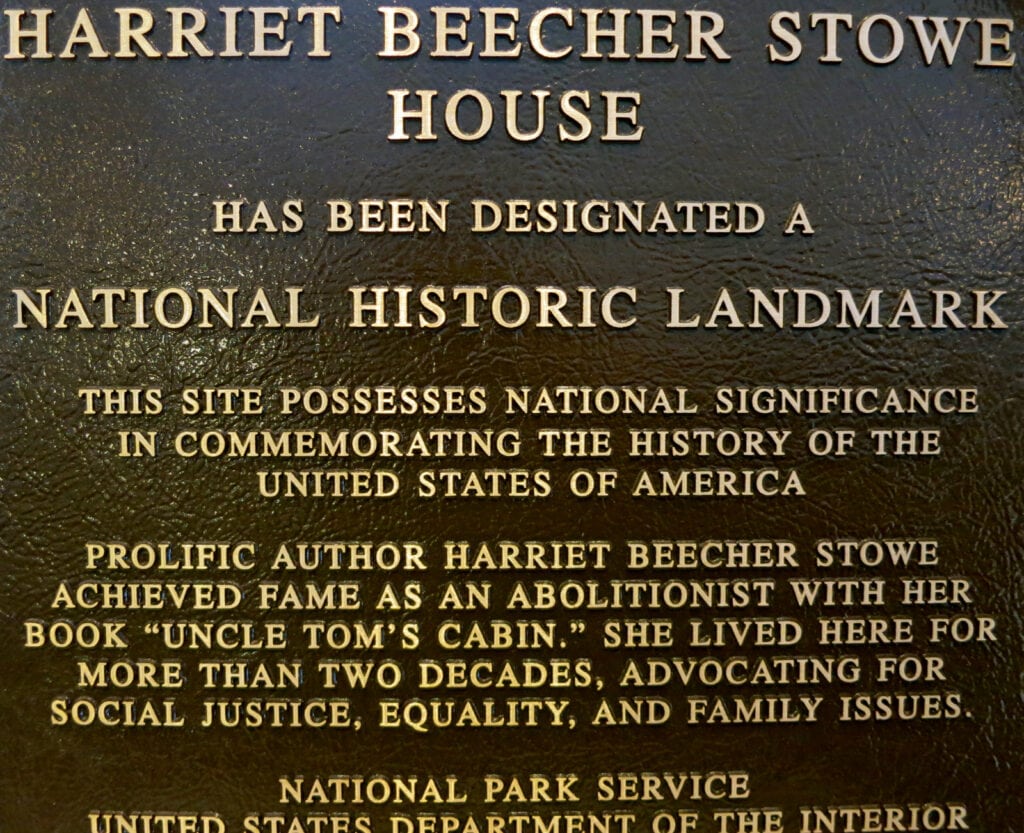 “So you are the woman who wrote the book that started this Great War…”  – purportedly stated by Abraham Lincoln to Harriet Beecher Stowe, author of the anti-slavery Uncle Tom’s Cabin, in 1852.

Harriet B. Stowe, daughter, sister and mother of a line of well-known Ministers, first composed what became the book Uncle Tom’s Cabin as a serialized story in the Washington DC Abolitionist newspaper, The National Era.

From her home in Maine, Beecher-Stowe wrote with seven small children underfoot. (Her husband, who she referred to as “my Rabbi,” was a Professor of Theology at Bowdoin College).

Stowe was surprised by increasing public interest and frenzy over her installments. Released in 1852, Uncle Tom’s Cabin became a significant best seller in the 19th Century, second only to the Bible. Beecher-Stowe’s book was instrumental in changing public opinion about slavery in America.

As today, there were product tie-ins –commemorative plates, figurines and booklets.

No doubt Solomon Northup took note of all this interest. His memoir, Twelve Years A Slave, was released the following year. 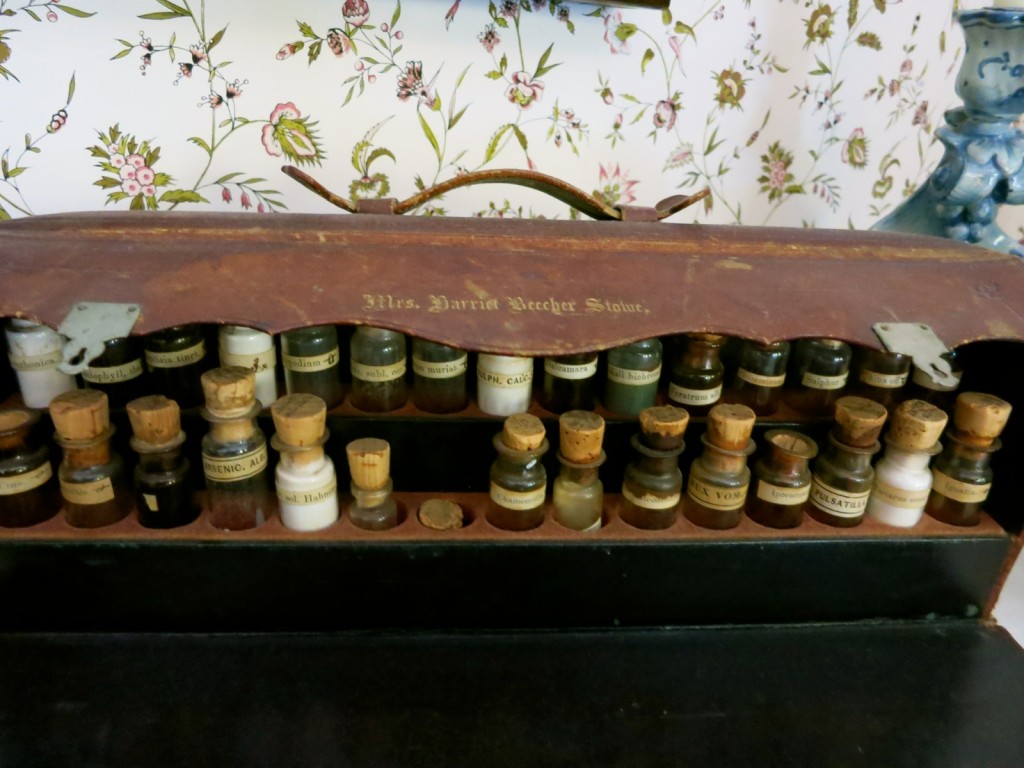 By the time the Stowes moved next door to Mark Twain in the mid 1870’s, Harriet had written most of her 30 published books.

DO: Ride the Bushnell Park Carousel

One buck gets you 3 ½ minutes on one of the 48 hand-carved horses of this 1914 carousel.  Open seasonally.

From May – November, the Connecticut Riverfront bursts into song, dance and quirky events.

Max Downtown is one of nine restaurants in the “Max” group. This high-end, leather-clad, atmospherically clubby steak house also serves up fish from “top of boat” and other inventive dishes sourced from local farms and purveyors. “Chophouse Classics” from $38-$48.

Let’s say it’s zero degrees out with snow in the forecast.  What to order at this very popular downtown eatery?  Anything pasta.  Burgers and sandwiches are very good, but the Sweet Potato Ravioli and Chicken/Shrimp Piccata with onions and leeks tumbled in essence of tomato broth over linguini will warm you till the storm passes.

Stay the Night in Hartford CT

Hartford is businesslike and traditional when it comes to lodging.  For a comfy, north-of-mid-level stay, the Marriott Downtown set between the Hartford Convention Center and Connecticut Science Center (and across from a brand new multiplex cinema) offers fine rooms and exemplary service.

Little things mean a lot to this traveler, and this particular Marriott has a few. Not that it’s a “little thing,” but service is so friendly, your stay here will feel the opposite of impersonal.

Breakfast in the Concierge-level lounge includes a smoked salmon and bagel platter (with onion/chive cream cheese!) – worth the extra $40/day alone for lounge privileges (though it also offers many more perks and meals through the day).

Rooms are upscale traditional Marriott – with great bedding and cool  products in a granite-sink bathroom. Rooms $160-$450 per night. Higher rates reflect Concierge Level with breakfast and unlimited snacks and services. 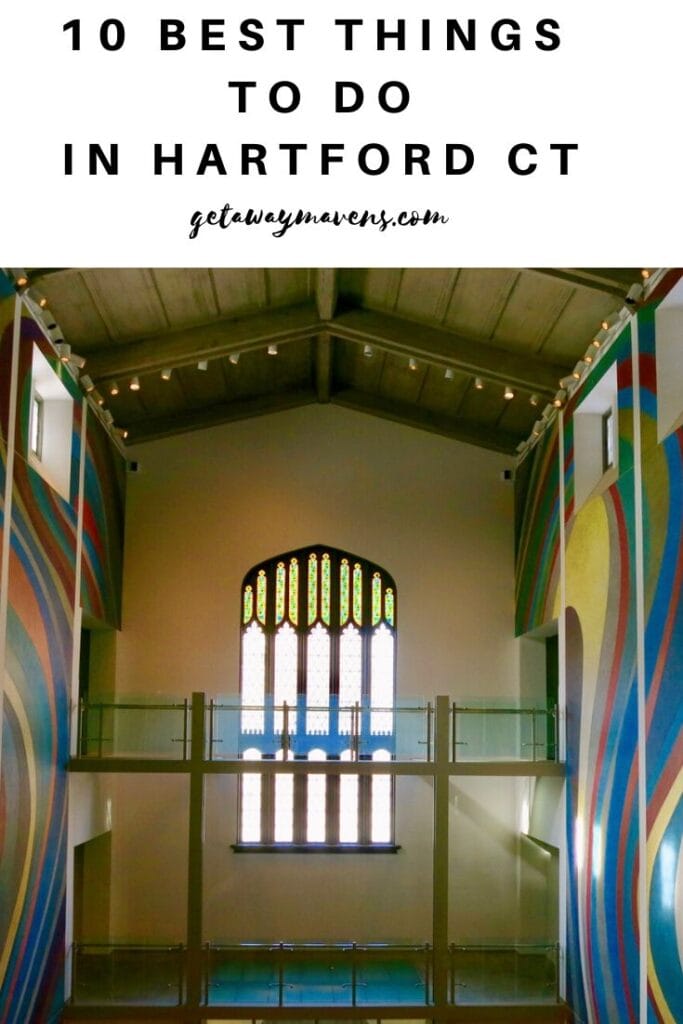 7 thoughts on “Hartford CT: A Capitol Idea For A Getaway”