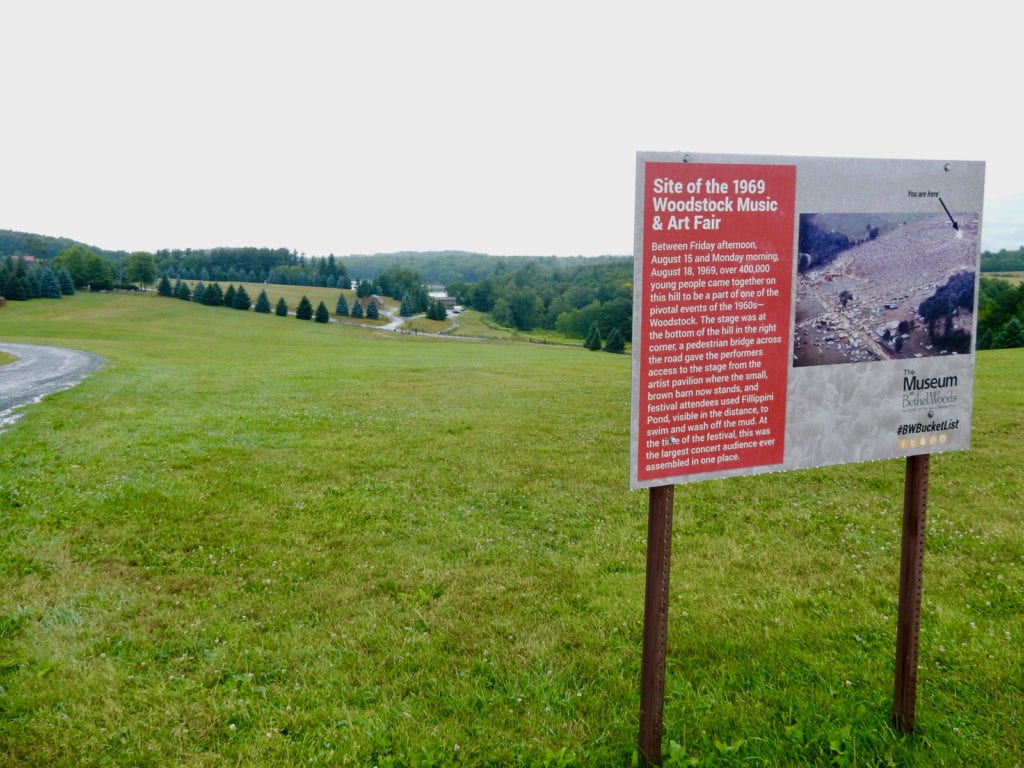 WHY GO: The Woodstock Music Festival was held in Sullivan County NY. “Three days of fun and music, and nothing but fun and music.” Need we say more? Of course, yes. 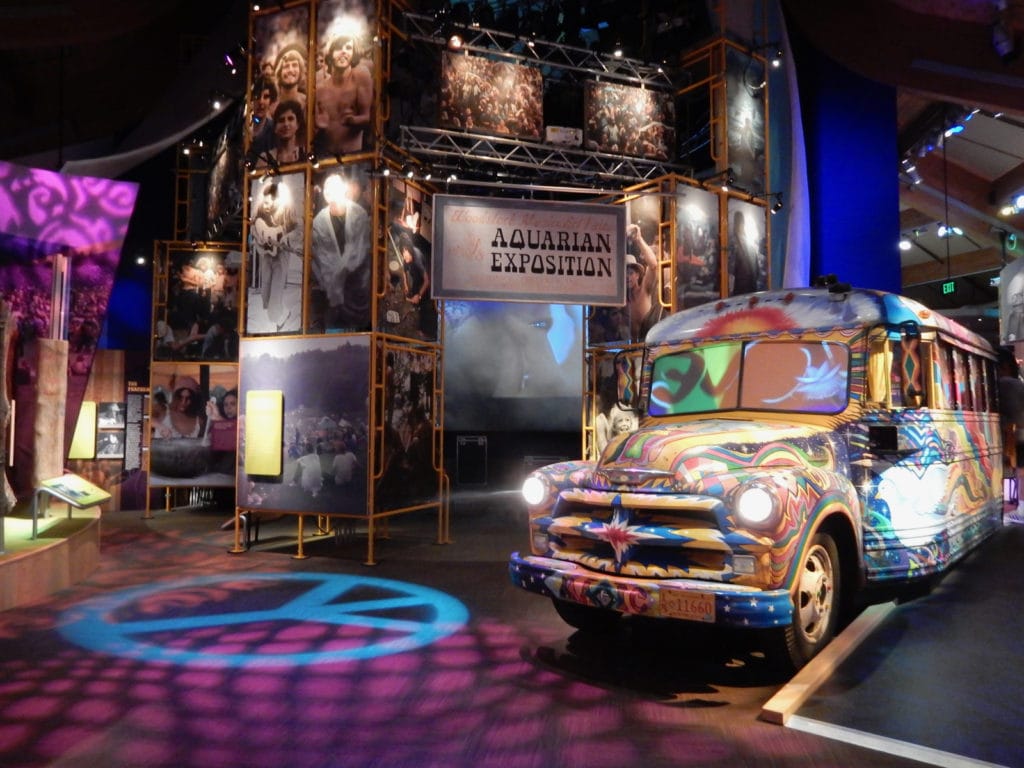 Boomers will recognize this area of the Catskills, also, as the former “Borscht Belt.”

Summer resorts like The Concord, Grossinger’s, and Kutsher’s (mostly abandoned and in various states of decay, one a Casino, another reimagined as a high end health resort) drew Jewish families from NYC. (This is where the movie, Dirty Dancing, was set).

But lately, a new crop of boutique hotels – less glitzy, more design-forward “of the land” – have been drawing a younger crowd in search of history and great hiking in Catskills Park, with cool shopping and farmer’s market eateries to boot.

Read on for the Maven’s Best in several Sullivan County NY villages. (The Catskills town of Mountain Dale warranted its own post here).

Things to Do in Sullivan County NY

The name “Bethel Wood”s  might not be familiar, but I’ll get right down to it. This was Yasgur’s Farm – the site of Woodstock Music Festival in 1969 – now a fantastic museum and once again a live music venue. Bethel Woods is hallowed ground and a touchstone for Boomers who lived through the 60’s, and also for youngsters intrigued by that era.

The Museum at Bethel Woods does a masterful job interpreting the turbulence, struggles, and ideals of the 1960’s. This was the decade, after all, that saw the assassination of a president, a senator, and a civil rights leader (John Kennedy, Robert Kennedy, Martin Luther King), the rise of the Berlin Wall, the Cuban Missile Crisis, and escalation of the Viet Nam War. But it also ushered in the “Summer of Love (’67), Women’s Lib, Flower Power, the moon landing. And, by decade’s end in 1969, Woodstock.

Over 400,000 people ultimately made their way up to this rural area of the Catskills – turning Bethel NY into the third largest city in New York for three days. Bumper to bumper Volkswagen vans and cars stretched for over 20 miles, requiring musicians to be flown in.

The bands loved the space . “It was made in heaven, a bowl with a rise for a stage.” Hundreds of thousands of young folks overwhelmed this small community. The logistics were mind-boggling. But local farmers and nearby residents rose to the occasion, making and distributing sandwiches and “breakfast in bed for 400,000.”

The weather was fine and then it wasn’t. But pouring rain and mud didn’t dampen enthusiasm. The Grateful Dead played in the dark. Richie Havens made up his song, “Freedom” on the spot. Canned Heat’s “Going up the country, do you want to go,” referenced the great gathering. Though some people got sick, there were only two deaths: one of a drug overdose, and the other, a 17 year old, killed by a tractor as it ran over his sleeping bag.

The Museum at Bethel Woods is infused with the vibes of Woodstock, with large-screen videos, and movies of the concert shown on several large screens and in a psychedelic “Magic Bus.” Those of us who lived through the era will feel a sense of wistful nostalgia tapping into that spirit of community and engagement. Open daily 10-7, $15 adults, $11 youth.

Nearby Roscoe, NY was “Trout Town USA.” In fact, fly-fishing actually begat tourism in the Catskills. So it makes sense to stop in to this informative museum, set on 53 riverfront acres, dedicated to preserving the fly-fishing heritage.

In addition you can fish in the Willowemoc Creek, picnic in a family pavilion, and practice casting. The museum itself features lots of glass cases, walls, and corners filled with everything to do with the Angler lifestyle. Peruse delicate hand made flies, photos of famous fly-tiers, tourism posters, and a unique Casting Simulator Machine. Open daily April-October 10-4.

This small town, like many in the Southern Catskills NY, has been going through a Brooklynish revival. Cadres of cool kids, partial to farm-to-table fare, hand crafted beer, and home-goods, have been leaving the city behind for a more bucolic life with like-minded folks. These are our favorite shops and attractions:

See the best of local contemporary art in two and a half bright galleries. A great temperature controlled diversion on a freezing or swampy day. Open Mon, Thurs, Sat 11-6, Sun 11-3, free.

SHOP: Morgan Outdoors (next to CAS)

Owner Lisa Lyons has a keen eye for ambling aptitude. She can assess your hiking level as soon as you walk through the door, and will size you up and send you on your way with a map to her favorite spots. Sullivan County, the “gateway into the 287,500 acre Catskill Park,” has hundreds of miles of trails for beginners and intermediates as well as for the most strenuous hiker.

Being unfamiliar with the terrain can cost you time, unless someone with local knowledge points you in the right direction. With the proper gear. Morgan Outdoors, purveyor of clothing, footwear, and all the necessities for 4-season outdoor adventures, has it all.

Lyons focuses on the region’s five steel Fire Towers that remain (out of 23), initially built to protect the forest. These structures now offer hikers a 360 view above the treelines. She’s a huge advocate for hiking poles – vastly different than your tree-limb walking sticks – and sells them like crazy in her store. Even if you don’t need anything, Lyons invites you to pop in for a “hand-drawn map” of local trails. They’re free.

Goods, clothing, and jewelry from all over the world. This is the second location for Anna Bern, former Design Director for Vogue Magazine, who has another Nest in Narrowsburg NY.

What a beautifully curated wine selection. And informative, too.

Walter Dette opened his first fly-fishing shop in 1928. At 90 years old, therefore, Dette Flies is considered the “Oldest Family Owned Fly Shop in the World.” The location has changed seven times since then, and Dette’s is now run by grandson Joe Fox, but this establishment never strayed from its original purpose. Come in to buy flies, tie your own, and/or learn how cast. Dette’s is a perennial destination for “dry fly fishing” accoutrements.

Known for its craft lagers, wood aged brews, and fantastic sours, Catskill Brewery credits “excellent town water” that “doesn’t have to be treated much at all.” Like all microbreweries, names of beers recount local places and legends. To whit – “Freak Tractor – a 100% Belgian Blond – references the vehicle that ran over and killed a teen-ager at Woodstock.

Though you may be able to find some crafts on tap in NYC and surrounding areas, you’ve got to get here for the “very precious” Catskill Grand Cru – a sour beer aged in Chardonnay oak barrels. It’s one of the most delicious sours on the planet.

This Sullivan County NY counter service sandwich shop slash market would not look out of place in Brooklyn. It’s a mash up of a rustic/funky NYC deli and farm-share. Pierced and sunny staff offers menu advice to multi-culti locals who’ve moved up, or have summer homes here, along with a growing number of visitors. There are terrific vegan options as well as organic, humanely raised meats.

Food is secondary to the beer, wine, and music at this “Borscht Belt BBQ” spot in an otherwise lonely, but possibly up and coming downtown. It’s Exit 98 off Route 17 – the original Borscht Belt highway.

Where to Stay in Sullivan County NY

Built in 1880 as an inn, and then a boarding house, The DeBruce has not roamed far from its origins – except stylistically. Now a cool-bean 14-room boutique hotel, owned by hospitality maestros, Sims and Kirstin Foster, the DeBruce is emblematic of a new kind of Catskill Hotel: less mass market resort, more high-end, mid-century-modern getaway.

The place is very much geared toward travelers who appreciate fine design and excellent food. Recently, the DeBruce was recognized by Conde Nast Traveler as one of the Best New Hotels in the World.

First Impressions of The DeBruce

Though the DeBruce is set on 600 acres, encompassing Willowemoc Creek, 5 miles of hiking trails, a “practice fly-fishing pond,” and a pool, you’d never know it at first. The building, nearly flush on a main road, comes up suddenly.

Walk up to the inviting porch, with requisite quasi-Adirondack-style rocking chairs and into the main “living room” – reminiscent of a Catskill summer camp gathering area, if your camp’s great room had been peppered with Knoll and Herman Miller furniture.

A smaller game room, with fireplace, offers a cozier hangout option, especially in bad weather. When the skies are sunny and bright, most guests can be found by the pool, fishing in the pond or river, or getting their forest bathing in on the trails.

Private bathrooms nearly double the size of the room and are magazine-worthy. Mine was actually in two sections – one very spa-like with soaking tub on herringbone pattern mosaic floor. The other with toilet and tiled shower.

Food at The DeBruce

This is what it’s all about here. There are two dining rooms, actually. One, the Club Room, downstairs, is a more reasonably priced, casual option.

Upstairs, in a glass walled room overlooking the hills, pool, pond, and river, you can partake in the excellent 9-course tasting menu, which is included in the room price or $125pp if not a guest of the hotel.

A made to order breakfast, which is also complimentary for guests, features locally sourced favorites like Oats and Yogurt, Duck Hash, and French Omelets.

Amenities at The DeBruce

Outdoor pool (with lockers just inside).

Weekend rooms start at $469 – $659 per night, midweek $419-$609 depending on the season and include 9-course tasting dinners and gourmet breakfasts for two. 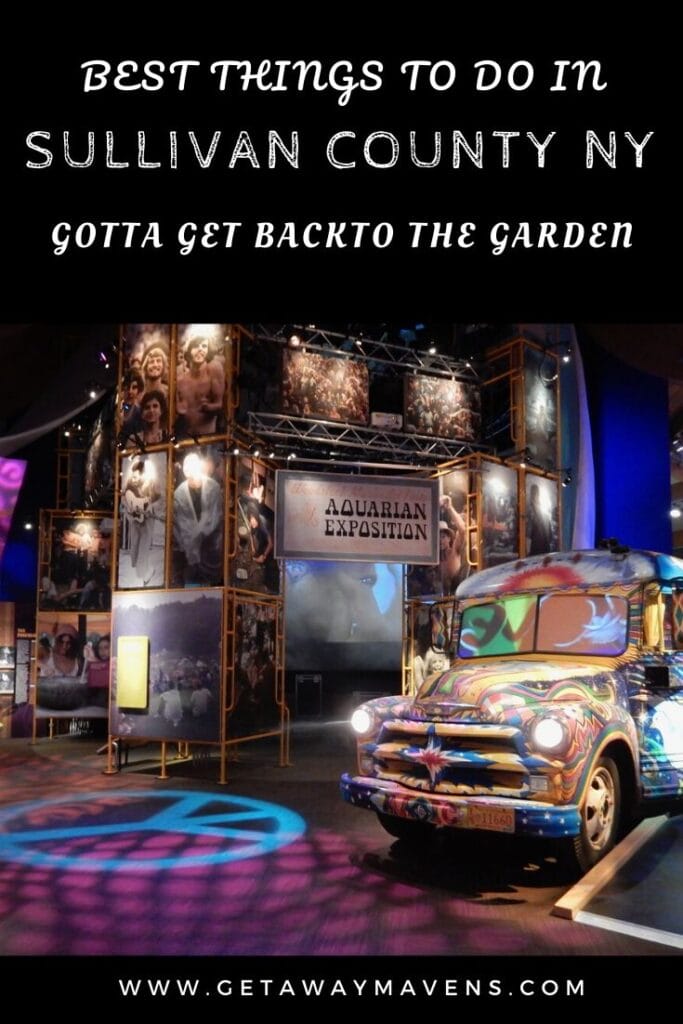