WHY GO: Are you into excellent State Museums? State Houses? Old (very old, the oldest) fortifications? Then, visit Augusta ME, which has it all, plus a very charming suburb with great restaurants, bars and shops.

Maine’s Capital City might not have the charm of the craggy coastline or adventurous lure of the rugged wilderness, but there’s no better place to learn about both aspects of our country’s easternmost state. Here’s what to do.

Things to Do In Augusta ME 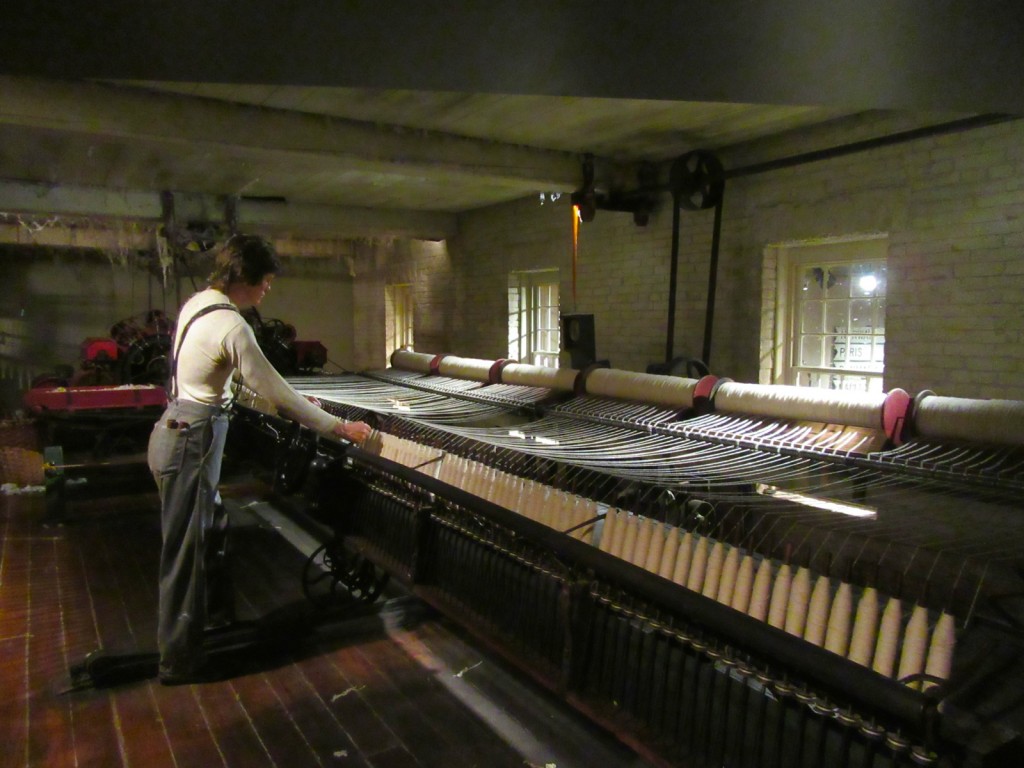 Do not be deceived by appearances. Low slung and not much to look at, the 1971 building that houses both the State Library and Archives and the Maine State Museum is built into the side of a hill and in fact encompasses four floors of exhibits – some really engrossing. 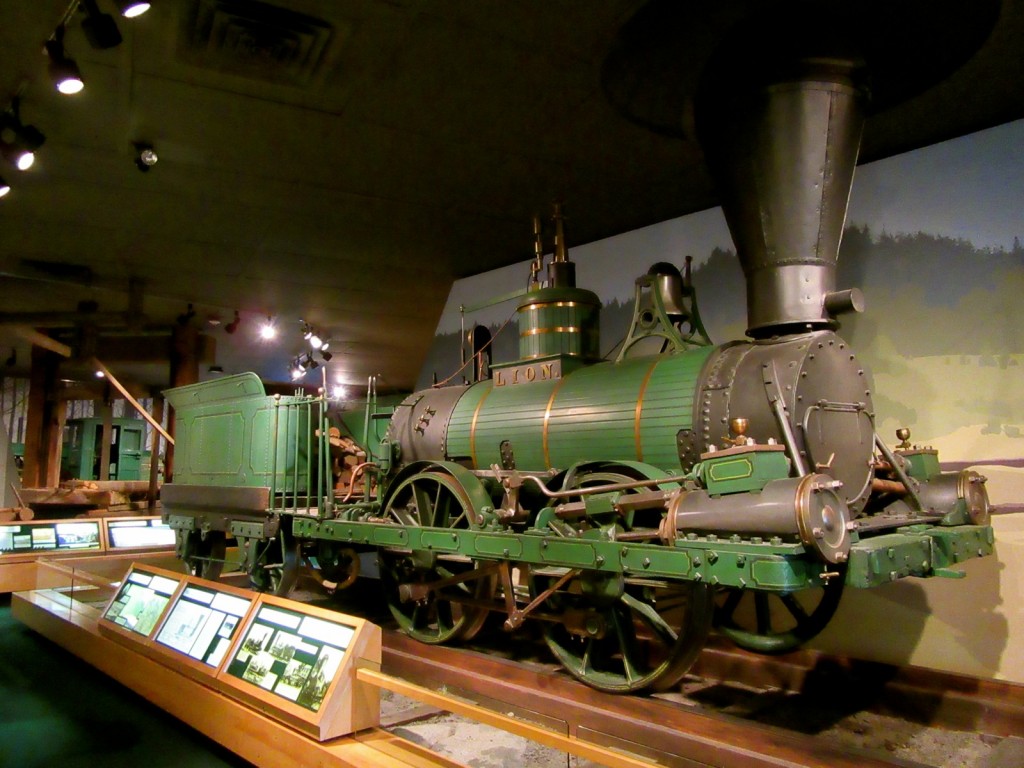 Enter on the 3rd floor where you can’t miss New England’s oldest locomotive, the 1846 Lion, which ran on (and currently sits on) wooden tracks covered with a thin metal veneer. 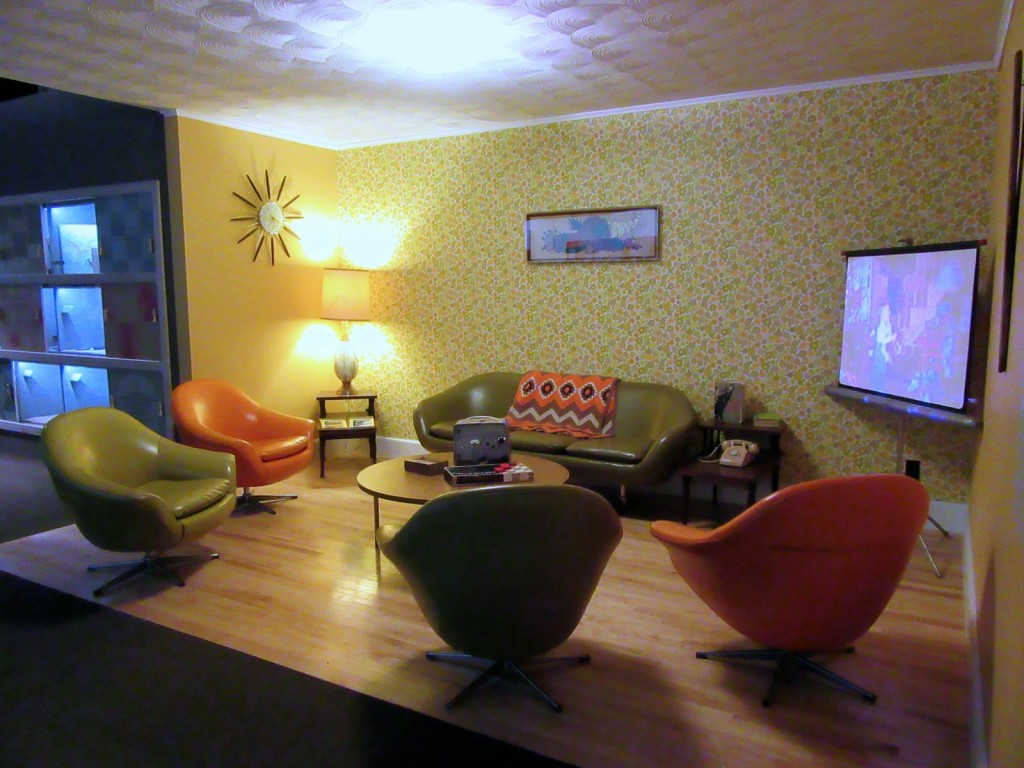 The Museum excels at creating scenes and environments. Take “Maine @ Home” on the 4th floor (the recommended starting point), where visitors are invited to sit in a 1960’s living room to catch up on some TV shows. Step onto a lakefront porch and listen to the sounds of boat motors and loons. And pull a flush-toilet chain and hear its rush of water, among other interactive experiences. 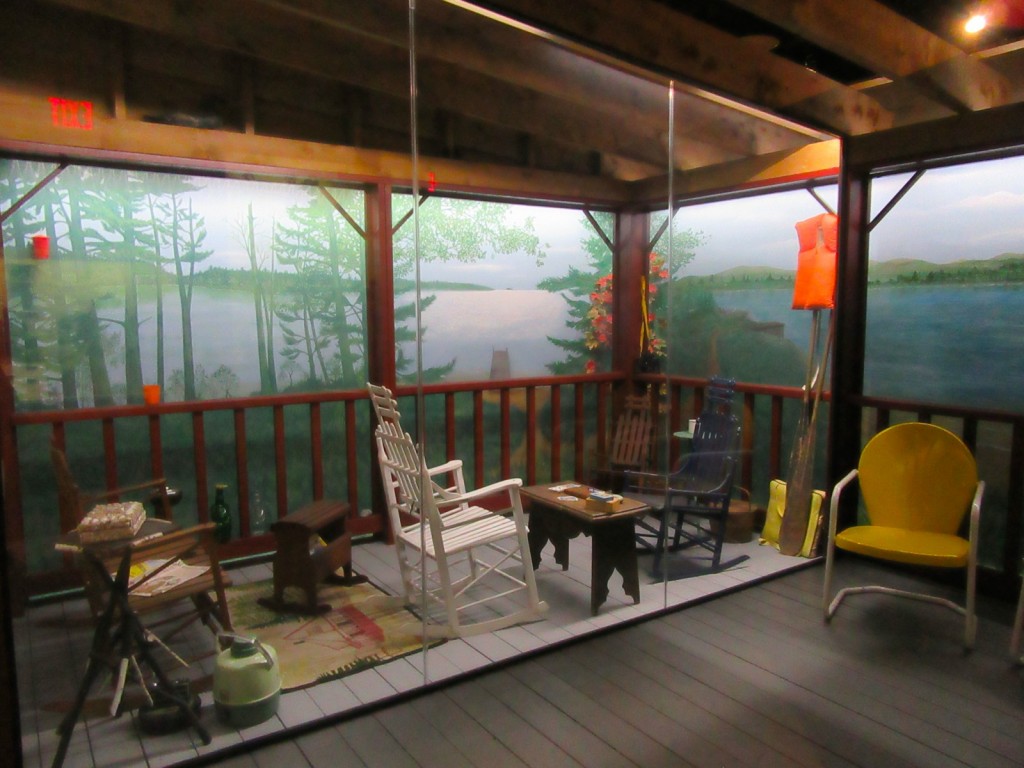 The 2nd floor “Made in Maine” features a two-story working water mill with ramps that wind around its inner workings. You’ll end up within view of a Cabinet of Curiosities. The “Luck Chair” made of Deer Antlers, is extremely popular. Check out its fur seat, worn down by hunters who rub it for luck before deer hunting season. 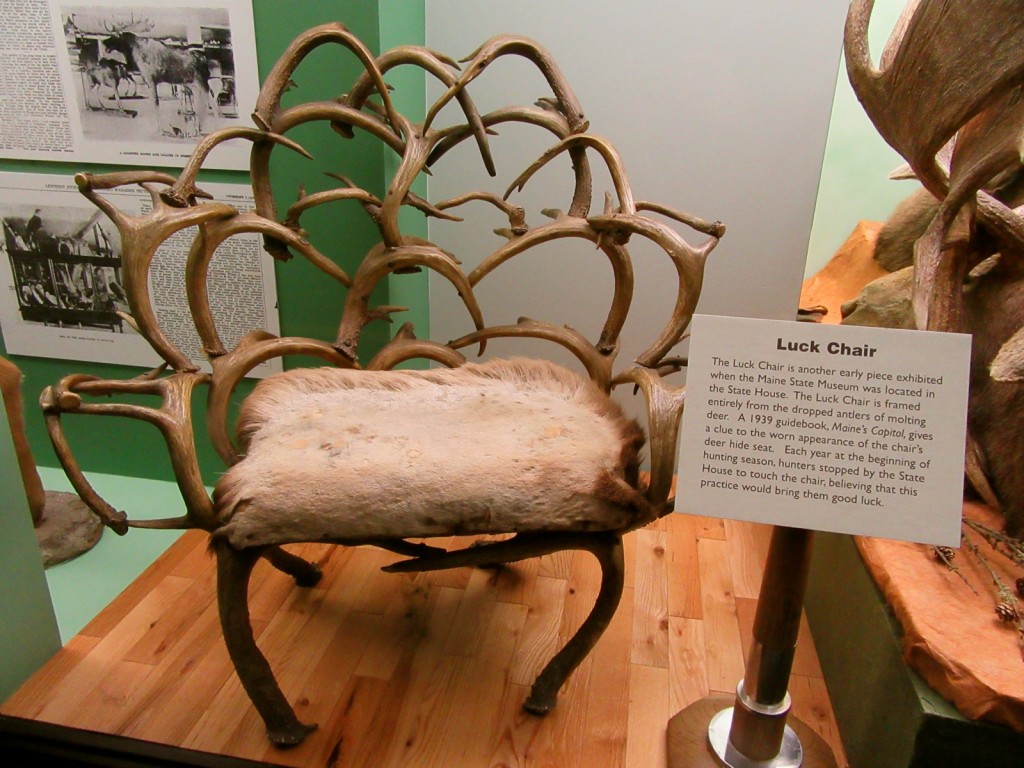 Fantastic nature dioramas – that rival the Museum of Natural History in NYC – and multi-media scenes of Maine industry will keep visitors engaged a long time. Plan at least an hour plus to see everything. $2, Tues-Fri 9-5, Sat 10-4. 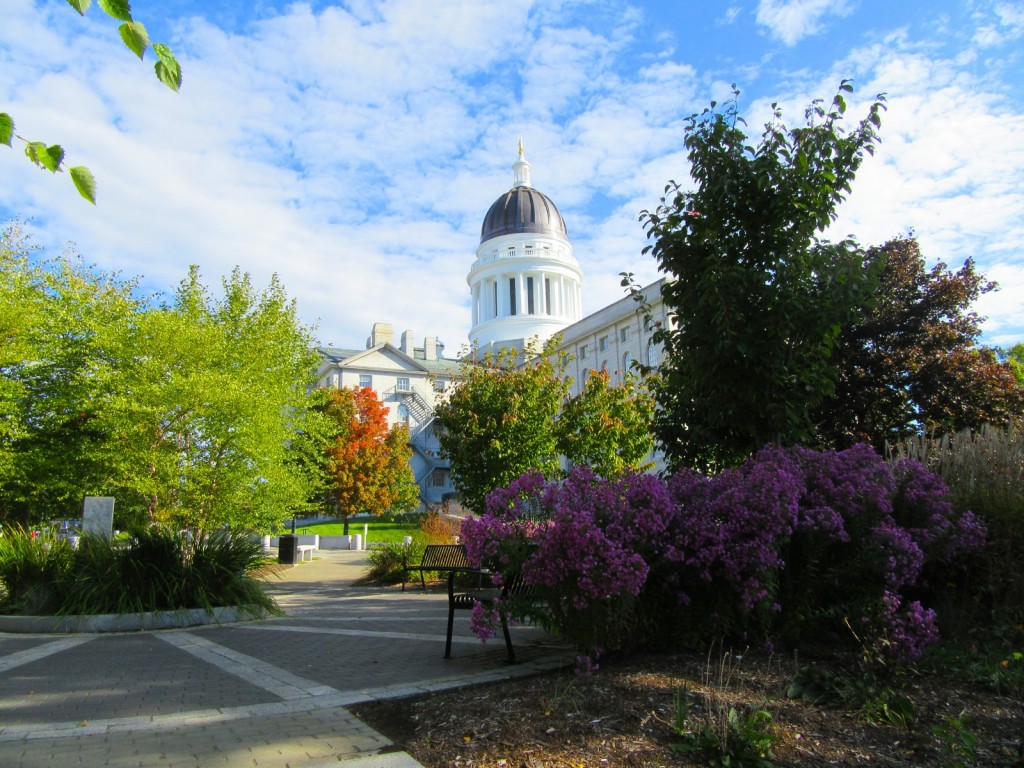 It’s just a short path through pretty gardens from the Maine State Museum to the entrance of the State House. Designed by Charles Bullfinch (U.S. Capitol, Massachusetts State House), and finished in 1831 (with new wings added in 1917), Maine’s Capitol building is as unembellished as a Puritan home. 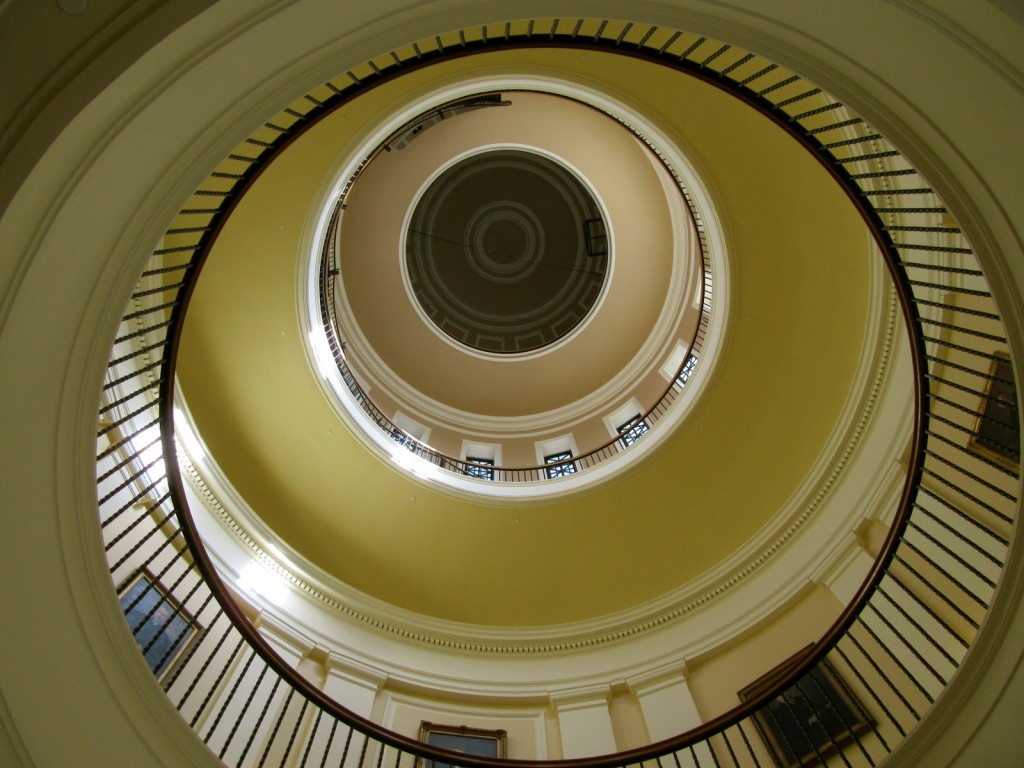 Because the interior is not gilded or festooned with fanciful architectural details, several portraits stand out. A bust of Percival Baxter, who endowed the state with the thousands of acres of forest that became Baxter State Park, is situated in the center of the rotunda.

A portrait of one of the country’s first women to be considered presidential material – Margaret Chase Smith, who served terms in both the Senate and Congress in the 1960’s – hangs near a portrait of Edwin Muskie.

Muskie, who served as Secretary of State under President Jimmy Carter, was from the very industrial and polluted Rumford ME, and as Senator, pushed though the Clean Air and Clean Water Acts in the early ‘70’s. 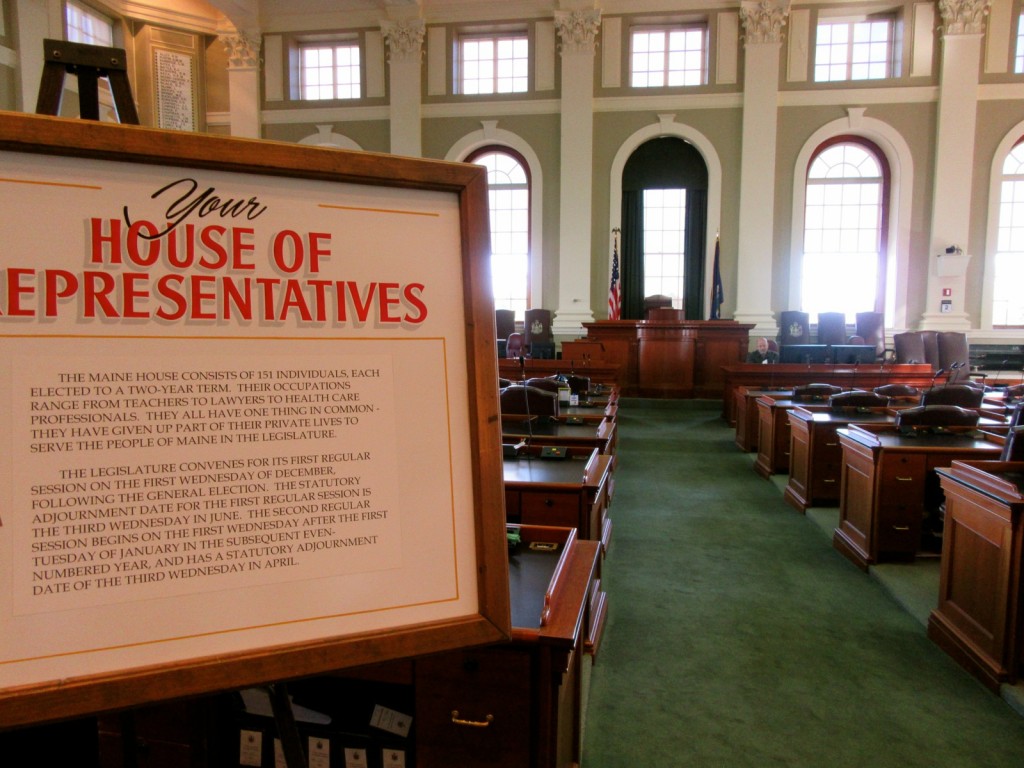 When you finished peering into the modest looking House of Representatives and Senate chambers, step outside on the patio overlooking Augusta – a beautiful view. Tours Mon-Fri 9-12 on the hour. Free. 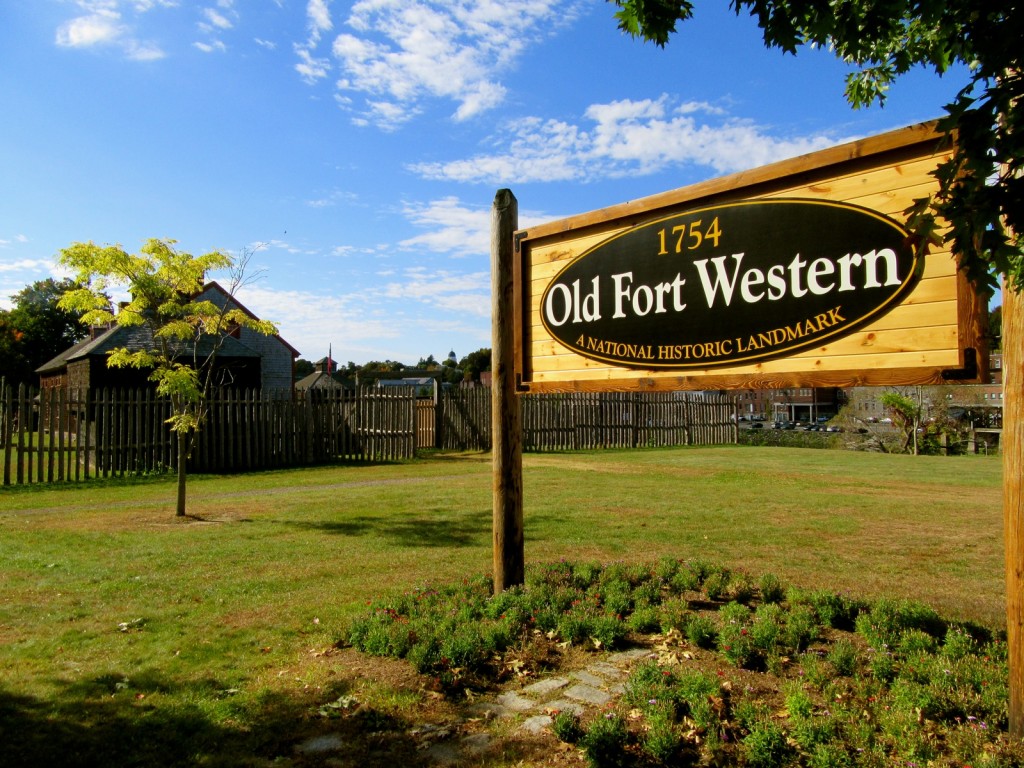 On the National Historic Register, Old Fort Western, built in 1754, is the oldest remaining original wooden garrison in North America. It stands as a 100 ft. by 32 ft. remnant of the French and Indian War.

A tour of the wooden fort is a fascinating trip through time. During Colonial America, this area of mid-Maine was unsettled wilderness. European merchants used the Kennebec River to transport items to trade with Native Americans for beaver pelts.

By the 1920’s, the buildings that remained of Fort Western served as a run down flop house for Irish immigrants. 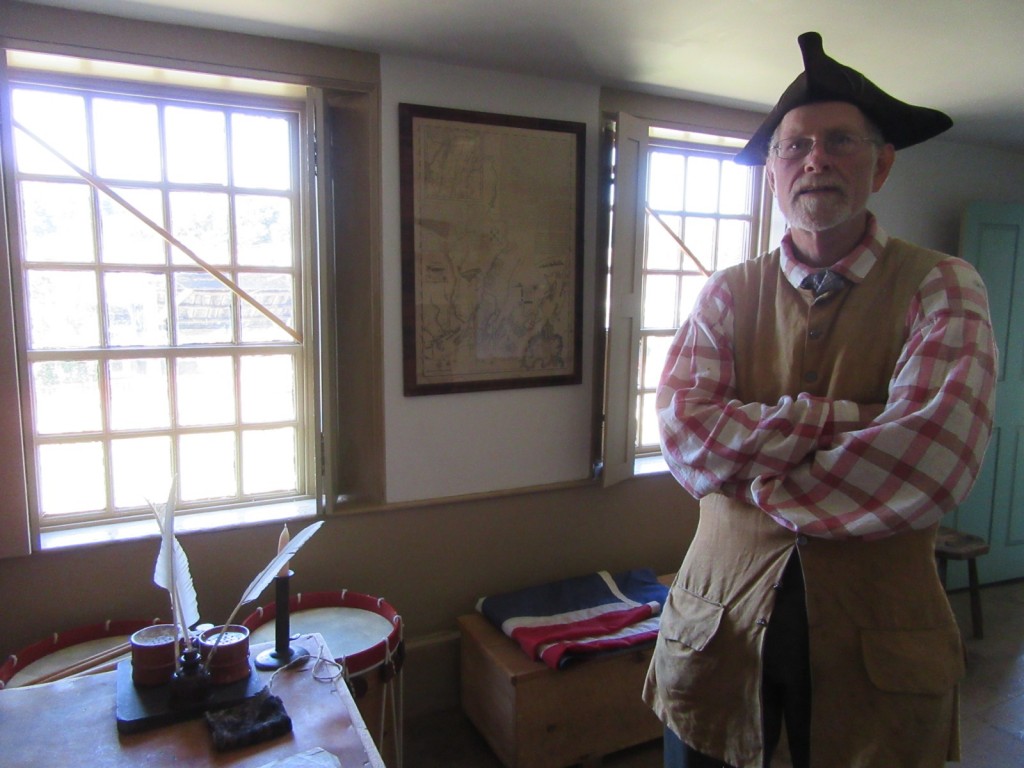 In the mid-1700’s, traders began to settle the land. The Fort became a well-trafficked trading post on the Kennebec River.

This was the last straw for local Native Americans who were incensed at the incursion of the White Man. These hostilities, in part, fed the French and Indian War. Reconstructed Block Houses on either side of the original structure offer visitors a glimpse of how this fort looked in 1750’s during that conflict.

After the war, Captain James Howard, the Venture Capitalist of his day, purchased the fort building. He shingled it, and used it as both his home and general store for the influx of settlers who made their way up the Kennebec River from the Atlantic Ocean shipbuilding town of Bath.

From here, they could transport goods to and from all corners of the world. Most fascinating are documents from that time provided by descendants of the Howard family. Surviving ledgers list items such as fish, pork, and timber, purchased for cash and barter. 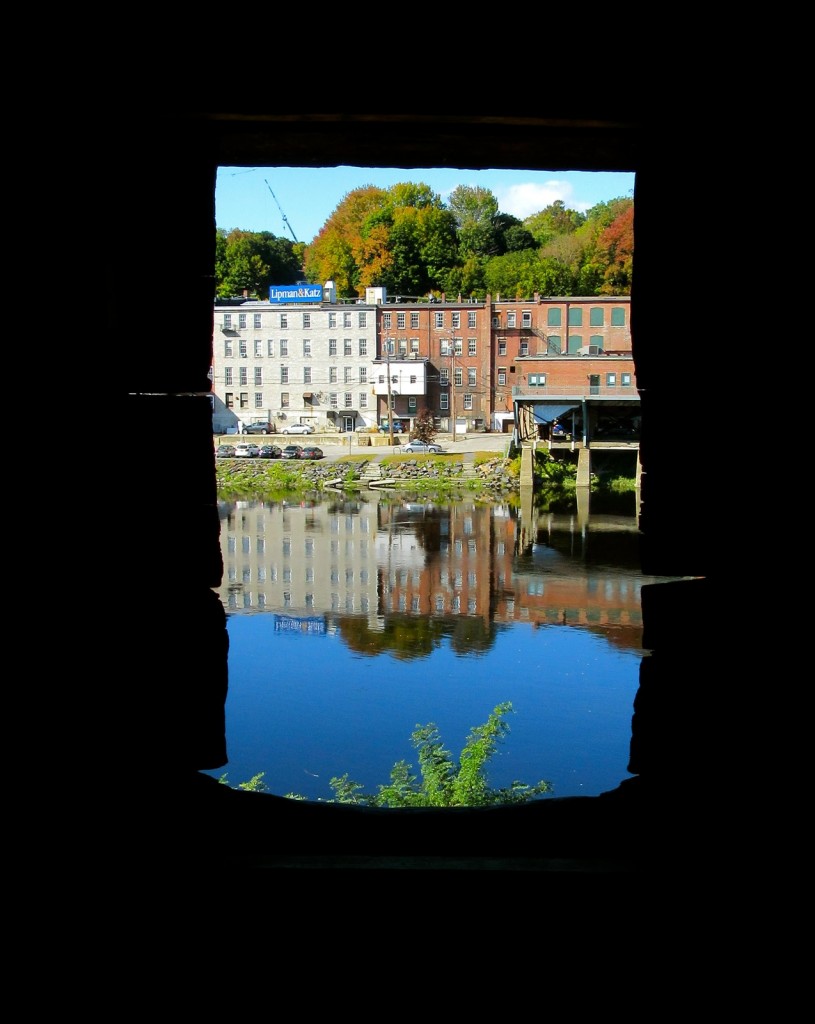 The store is fashioned as it would have looked in the late 1700’s. Settlers could buy tools, bolts of fine cloth, buckles, buttons, pins, needles, tobacco, pipes, silk from China, fashion dolls, household goods, paper, ink, ceramic ware, and other exotica one wouldn’t imagine could be found in the middle of the woods.

James’s son, William Howard, inherited the property and turned it into a showpiece. He loved to entertain, so the dining room is set with a china cups, crystal wine glasses and decanter, awaiting the guests arrival. Original wooden chairs (circa 1790), painted to look like bamboo, surround the table. 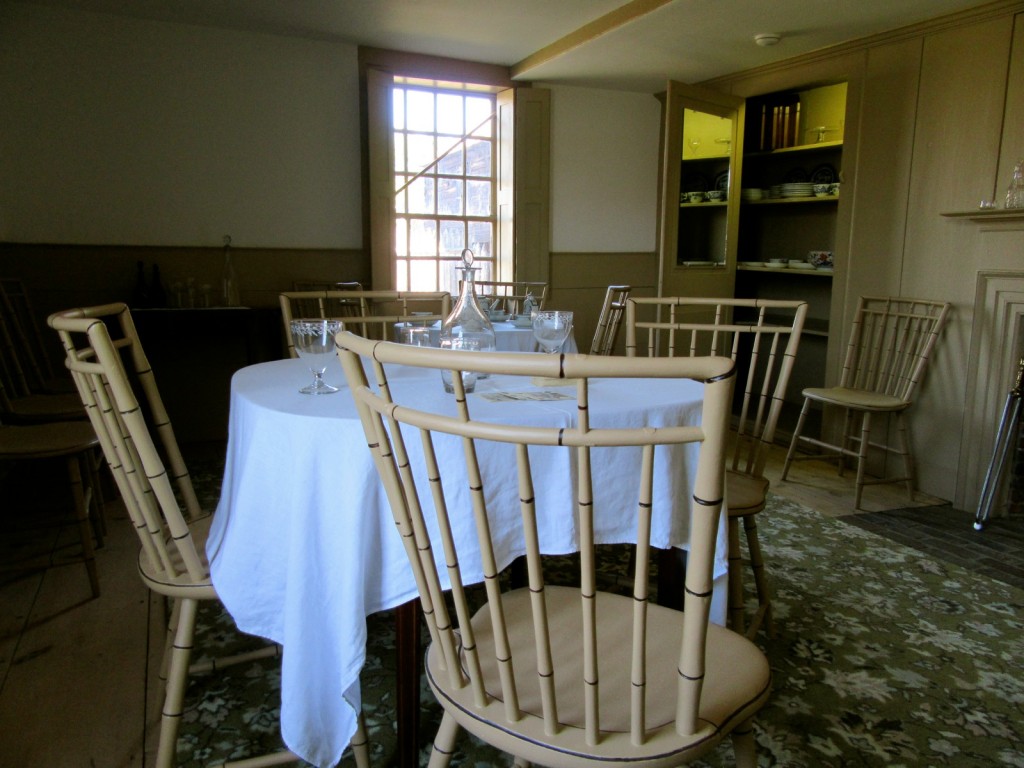 By the mid 1840’s, the Howard Family had moved out and the building was sold to a real estate company that turned it into an 8-room apartment house for mill workers.

In 1922 the Gannett Family (descendants of the Howard’s) purchased the run down place. They restored it and turned it over to the city as a museum. It has been in operation as a historic site ever since. Open Memorial Day to Labor Day Wed-Mon 10-4 weekdays, 11-4 weekends. Labor Day to Columbus Day 11-4 Weekends only. One hour tours $10. 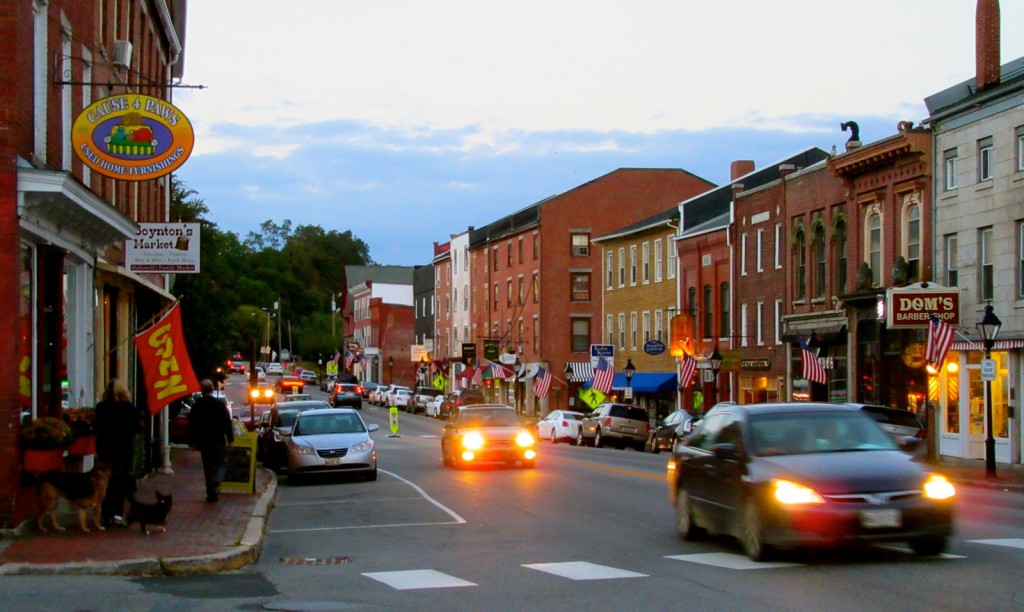 A cute ‘burb of Augusta, Hallowell’s Main Street invites window and actual shopping. You can spend hours perusing art galleries, antique stores, and pause for the best restaurants and bars in the Augusta area.

Best Restaurants in and Around Augusta 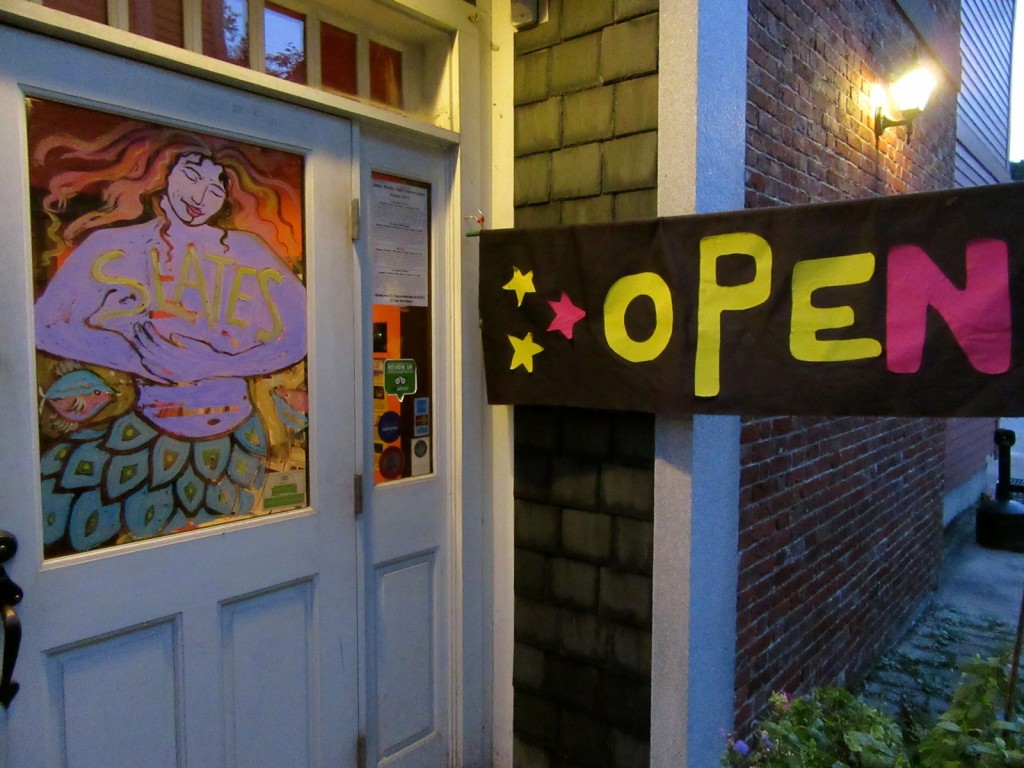 On the hippy end of the farm-to-table movement and way before its time, Slates has been dishing out locally sourced foods for thirty years.

Dine on wonderful dishes in a funky Caribbean-hued space. Homemade desserts are excessively decadent. I bestow a thousand blessings and curses on the too good Chocolate Mint Cheesecake. 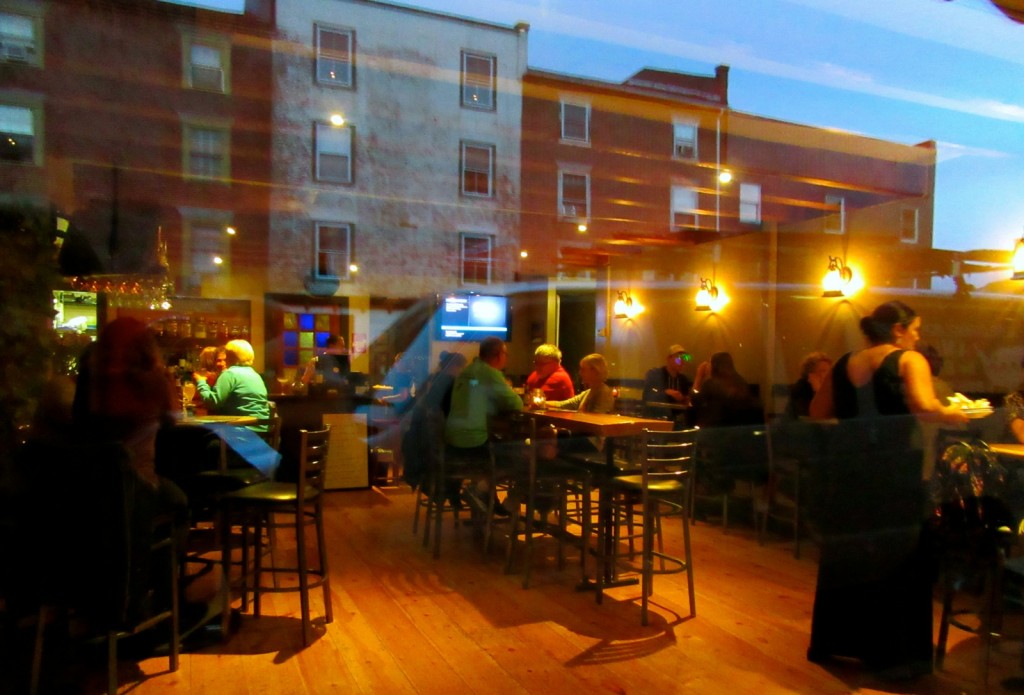 Dine on small plates and imbibe in the creative efforts of an expert mixologist at this trendy-rustic spot.

Where to Stay in Augusta ME

Comfy, updated, and though a chain hotels, the best places to stay in town.

Combine your Augusta getaway with a stay in the mill/shoe factory towns of Lewiston-Auburn ME.