Home » Northeast » New Jersey » Atlantic City NJ: Who Needs Casinos When You have The Boardwalk?

WHY GO: Once upon a time, Atlantic City was the “place to be” on the East Coast, with what was called “the most historic pedestrian promenade in the world.” Top bands and stars appeared here. Sun worshippers flocked to the Boardwalk and the wide, clean beaches.

Bert Parks sang “There She Is, Miss America” as a newly crowned beauty sashayed down the catwalk. And even the astounding Diving Horses had their moment of fame (before the ASPCA completely harnessed that breathtaking act). Atlantic City became tarnished by corruption and got even seedier when the casinos moved in during the late 1970’s.

Yes, there are still some unappealing parts of town, and some large casinos have shuttered, but major celebs are headlining again, sections of the city are gentrifying, and the boardwalk is still very much intact.

So, even if you are not a gambler, come here for some of the reasons our ancestors did. Sun, fun, excitement, hot bands and cool nights. Here’s the Getaway Mavens way to see Atlantic City.

Things to Do in Atlantic City

No need to drive in AC. Short busses will transport you to both the Boardwalk (most casinos) or Marina (Borgata) side. Just be sure to get on the right one. $2.25 per ride, $2.00 for”Frequent Rider” program. Exact change or ticket required.

DO: Stroll the Boardwalk

Originally built in 1870 to keep sand out of the resort hotels and shoreline trains, the Atlantic City Boardwalk was widened and lengthened over the years to 4 miles long. It is still the best people-watching way to get your exercise. Or not.  You can opt for a human-powered rolling chair to get you where you want to go.

This was the famous Steel Pier that, from the roaring 20’s until the 1960’s, saw hot bands, hotter celebs and the famous Diving Horses. Al Jolson, Frank Sinatra and even the Beatles played on its planks.

Rebuilt by Donald Trump after a fire destroyed the original, the 1,000 foot long Steel Pier served as The Donald’s helipad until Anthony Catanoso and his brothers began managing it as an amusement park and purchasing it outright in 2011.

Since then, the Catanoso’s have sunk millions into the pier, adding many new rides, including 227 ft. tall Ferris Wheel, called simply “The Wheel.”

For a treat, head to the pub at water’s edge. “It’s the only place you can have a drink 1,0000 feet out in the ocean without being on a boat,” says Anthony. Open daily June 13-Labor Day, weekends till October 31st.

The Getaway Mavens recommend this as one of the Best Places to Propose in NJ.

What the Catskills were to Jewish Humor, the Borgata is for Italian, and you’ll find the same range of funniness here that you would in any New York City comedy club.

SEE: Pick A Show, Any Show

On any given night, there’s something – many things – going on. Nightlife in AC proves to be an embarrassment of riches – with a tab that can run from zero to thousands. This town still draws the best of the best. Coming up in 2020 — Tiffany Haddish, Celine Dion, and more of their caliber.

When Philadelphia fishmonger, Joseph Fralinger, took over a taffy shop on the Atlantic City Boardwalk in the 1880’s, he perfected his recipe and started stuffing oyster boxes with the freshly made confection for tourists who wanted to take a bit of Atlantic City home with them.

Nearly 130 years later, you can still purchase a pound of Fralinger’s Taffy for $12.99 – making it one of the least expensive, relevant and delicious souvenirs you can buy.

It’s loud and busy in this top-notch steakhouse, with cuts of meat and other menu items on the pricy side. You can’t miss the “Lobster Bar” – Flay’s version of an oyster bar with whole, fully-cooked crustaceans poised on ice to entice. Yes, it’s pricey but you don’t have to cash all of your winning chips here. “Rack of Pork” is $36 and even a NY Strip is $48.

Opened “for the Revel construction workers” in the middle of the “aughts,” this sub and pizza dive is more inventive, fun and tasty than any run of the mill pizza joint in town. Though a bit remote, fans don’t mind – the food is that good.

“Let My People Go” – is a whole “Passover Seder” on a hoagie roll – barbecue brisket, charoset and horseradish among other ingredients. Or try the Shanghai Shuffle Pie – a white version with sweet and sour Asian fried chicken with scallions – among dozens of crazy options. Ironically, though Tony Boloney’s opened during Revel construction, it’s outlasted that bombastic casino (now the Ocean Casino Resort).

Though Gilchrist opened up a few more outposts, you’ll find the original on the Gardner’s Basin side of AC, adjacent to a row of commercial fishing boats tied up to the bulkhead. It’s the anti-AC, no glitz whatsoever, and you may question where you are exactly.

If it’s a nice day, sit on the deck overlooking the canal with casino hotels in the distance. Get the “Short Stack Hot Cakes” – a fan favorite – two unadorned pancakes the size of a dinner plate. Nothing fancy , just good, hearty fare.

Sure, it’s hokey. And, you don’t go for the food. But with the palm trees on the sand, you can pretend its Key West, and after a few drinks, you won’t know the difference. Within eye-shot of Steel Pier, you won’t have to go far, either, for some of the most daring rides around.

Apparently, Atlantic City is huge on steaks and Italian. Ruth’s Chris and Morton’s rank high. But I had a most fantastic meal at Cafe 2825, which features traditional Italian dishes and table-side fanfare. Be sure to order the raclette, melted from a hollowed wheel of Pecorino cheese right at the table. Super duper.

Where to Stay in Atlantic City NJ

One of the benefits of staying in this off-the-main-drag Starwood Hotel, especially for non-gamblers, is the fact that it’s one of the only upscale hotels in AC without a resident casino.

A small statue of Bert Parks holding a Miss America crown greets you in a lovely entry garden, and inside the lobby, you’ll find a small exhibit of well-known Miss America winners with their gowns and other accoutrements.

Rooms are not over the top, but up to Sheraton-Marriott standards. And they are certainly less expensive than those on the ocean, starting out off-season at $89 per night.

Over the top Borgata houses a slew of slots and tables. But anyone interested in ritzy décor will want to at least walk through this cool gaming palace. If you stay here, see a Comedy Show or eat at Bobby Flays (see above). Rooms start at $310 per night.

What was the Revel is now Ocean Casino Resort. With its high-profile roofline, it can’t be confused with anything else. Fortunately, Ocean kept Revel’s cool roofdeck pool intact. Rooms from $329 per night. 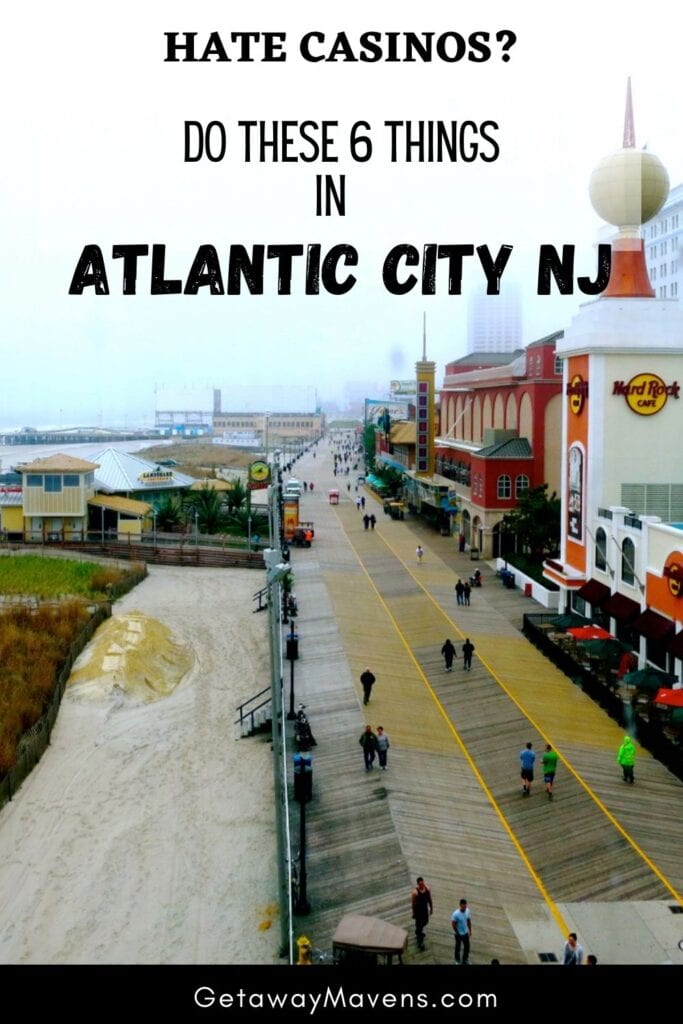