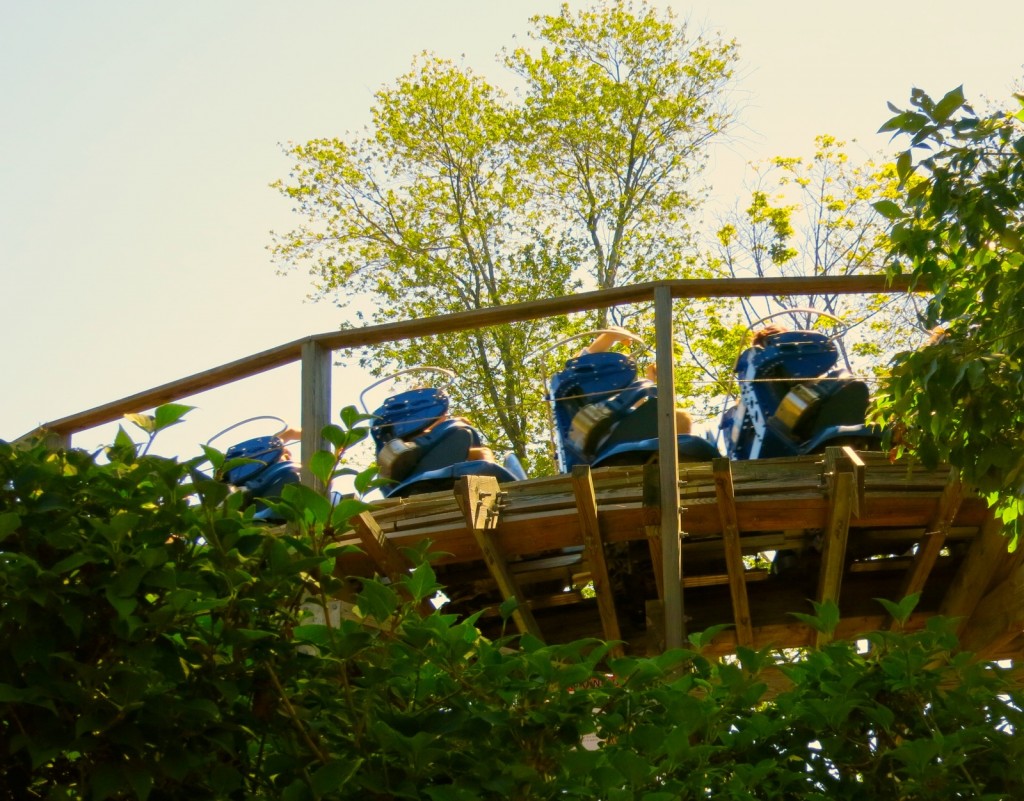 WHY GO: Woodbury, CT and its bordering towns – Middlebury and Southbury, the “Bury’s of Litchfield County – make up what is considered to be the region’s first established Antique Trail. Old colonial homes line Route 6 (Main St.), which was laid out along an ancient Indian trail when the town was established in the 1670’s. 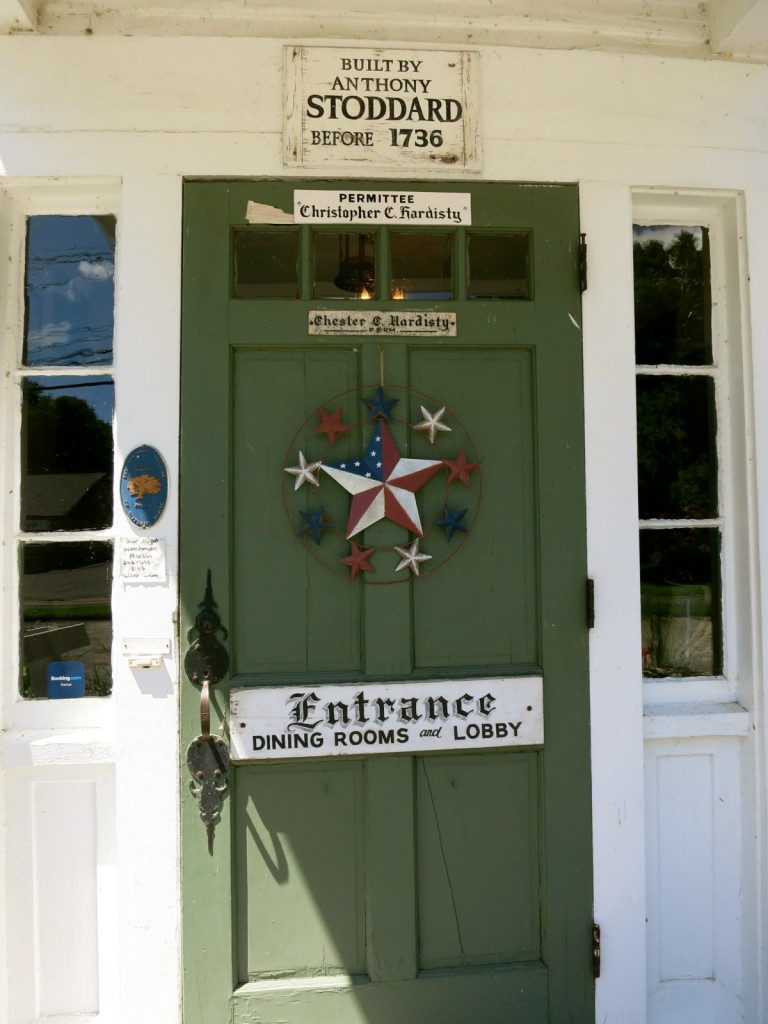 Main Street saw the advance of Generals Washington, Lafayette and Rochambeau during the early struggles of our new nation. With one of the country’s only pewter factories, and the country’s oldest inn, it caters to travelers who yearn for an authentic “Colonial American” New England town experience.

But there’s more, including a family owned lakeside amusement park, a mysterious Russian Village dating back to the 1920’s, the birthplace of the US Episcopal Church, and a brand new spa concept (salt). So read on and come to the “bury’s of CT.

Things to Do In Woodbury, Middlebury and Southbury CT

Scenically set on a lake, this small-scale, family owned amusement park, three miles from Woodbury center, has both dry and wet rides. The swoopy wood coaster, The Wooden Warrior, was rated among the Top 25 Wooden Roller Coasters in the world.

Spend hours on the beach, on super water slides, or watching your kids or grandkids have all the fun. It’s wholesome and small – you can’t get lost. $30 for all day rides. Seasonal, so consult website for hours. 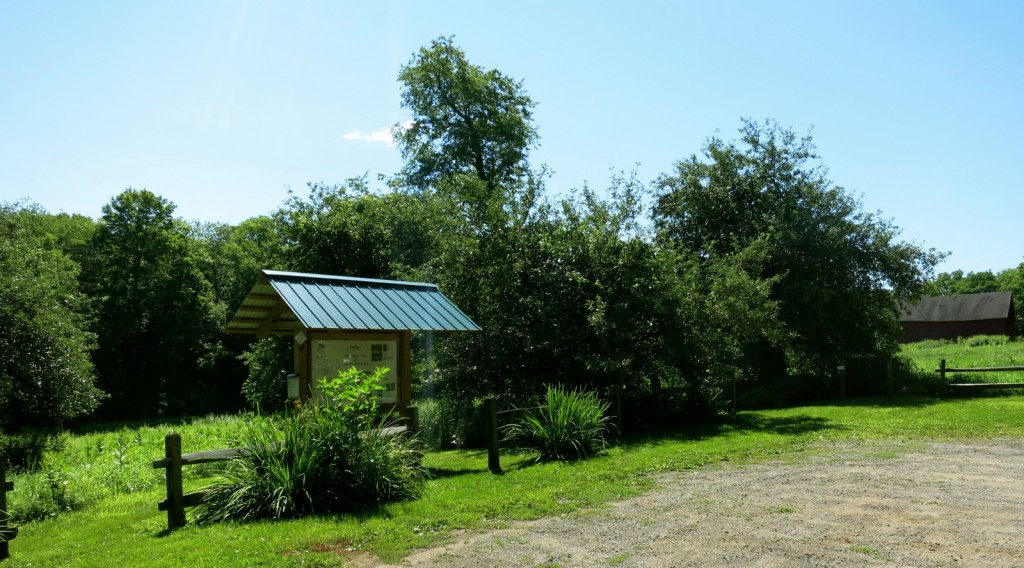 The 2,300 acre Flanders Nature Center is made up of six hiking preserves and nearly 50 Land Trust Parcels. The most well known is the 200-acre Van Vleck Farm and Nature Sanctuary. Plan to stretch your legs on a 20 minute to one hour loop that takes you through meadows, ponds, marshland and old forest – a diversity of habitats all in one place.

The 700 acre Whittimore Sanctuary is distinguished by a bog as well. The Nature Center was founded by Natalie Van Vleck (1901-1981), a single, never married heir to the Macy’s Department Store fortune who dressed as a man and lived in Manhattan.

Van Vleck was passionate about art, traveled solo all over the world. She got into land conservation quite by accident – and oddly.

After winning a live turkey at a turkey shoot, she required land on which to keep it. So, Van Vleck purchased acreage up here and, in addition to turkeys, began raising prize-winning sheep. She bought more and more land as her flock grew. Since Van Vleck had no children, she left her property, plus some, to the community. Definitely worth a half hour stroll. 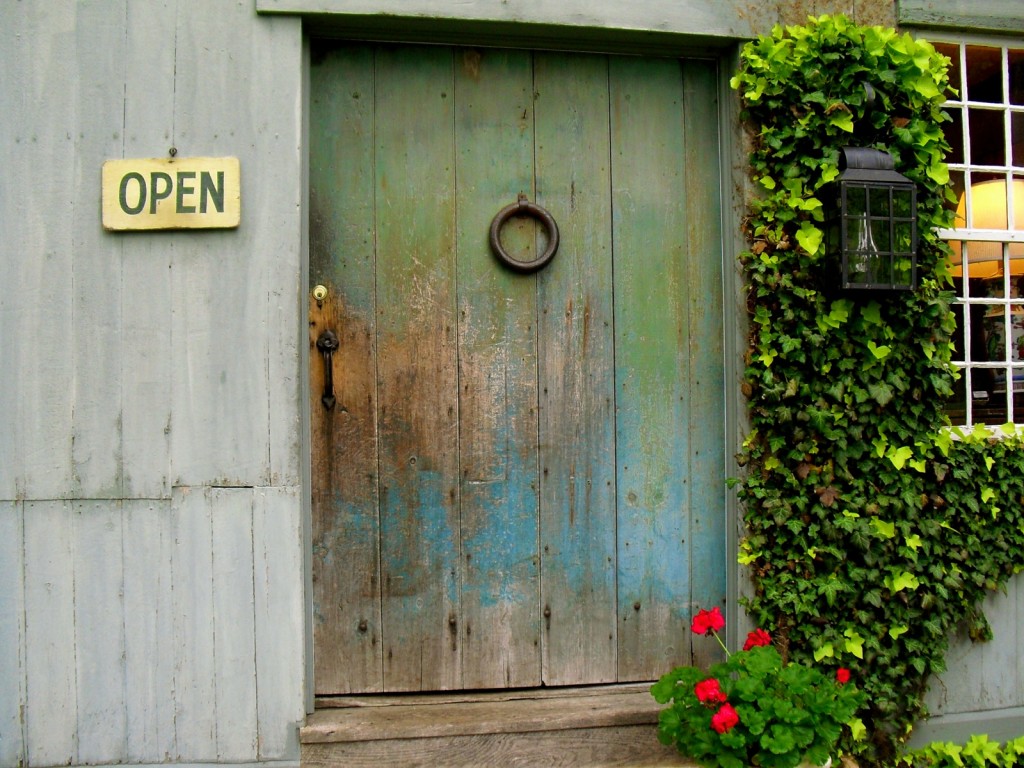 Even if you aren’t particularly interested in old furniture, pay a visit to Mill House Antiques. A purveyor of fine 18th and 19th Century French and English pieces, the shop is set within the hunched, rough-hewn rooms of a 1700’s gristmill.

Mill House’s large “hatchet door” is so named due to its double-strength wooden planks laid both vertically and horizontally to prevent Indian hatchets from penetrating. Come in to smell the burnt wood from centuries old fireplace fires. 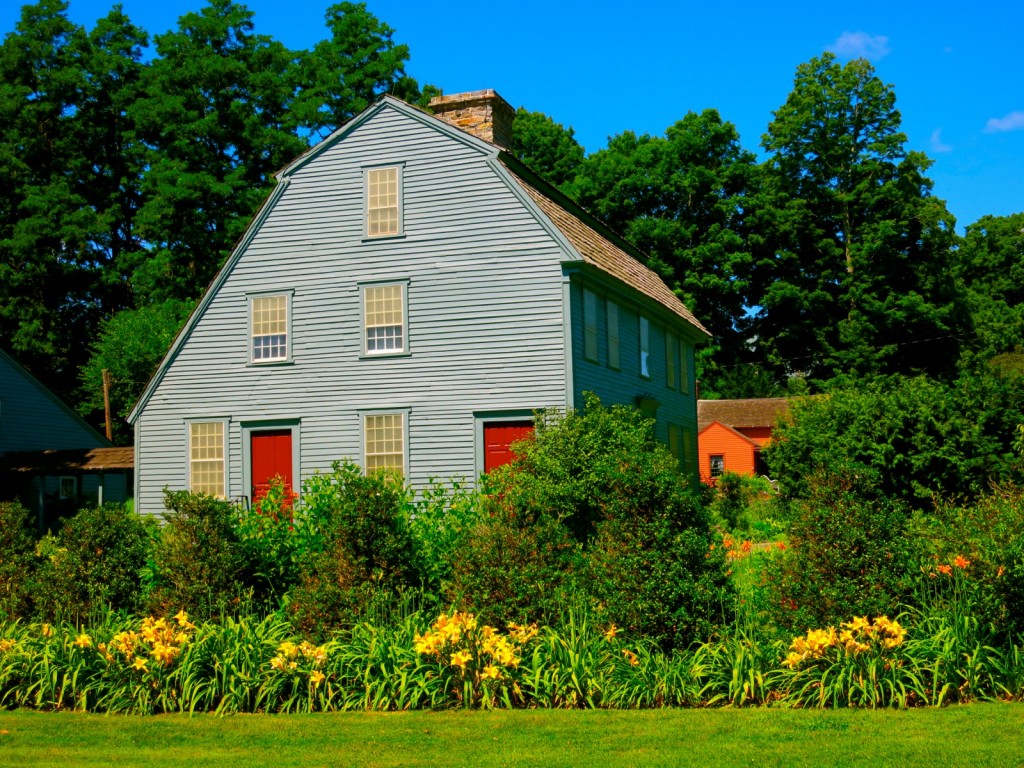 Episcopalians and serious gardeners make pilgrimages to the Glebe House Museum and Gertrude Jekyll Garden. It is, after all, considered the birthplace of US Episcopal Church. This elegant and simple blue farmhouse is rimmed by the only authentic English Country Garden in the USA designed by famed British horticultural designer, Gertrude Jekyll.

The Glebe House is indubitably the most photographed building in the area. Plans for the garden were found in California in the 1980’s, with flora replanted exactly to original specifications. May – October: Wed – Sun 1:00 – 4:00, November: Weekends only 1:00 – 4:00, 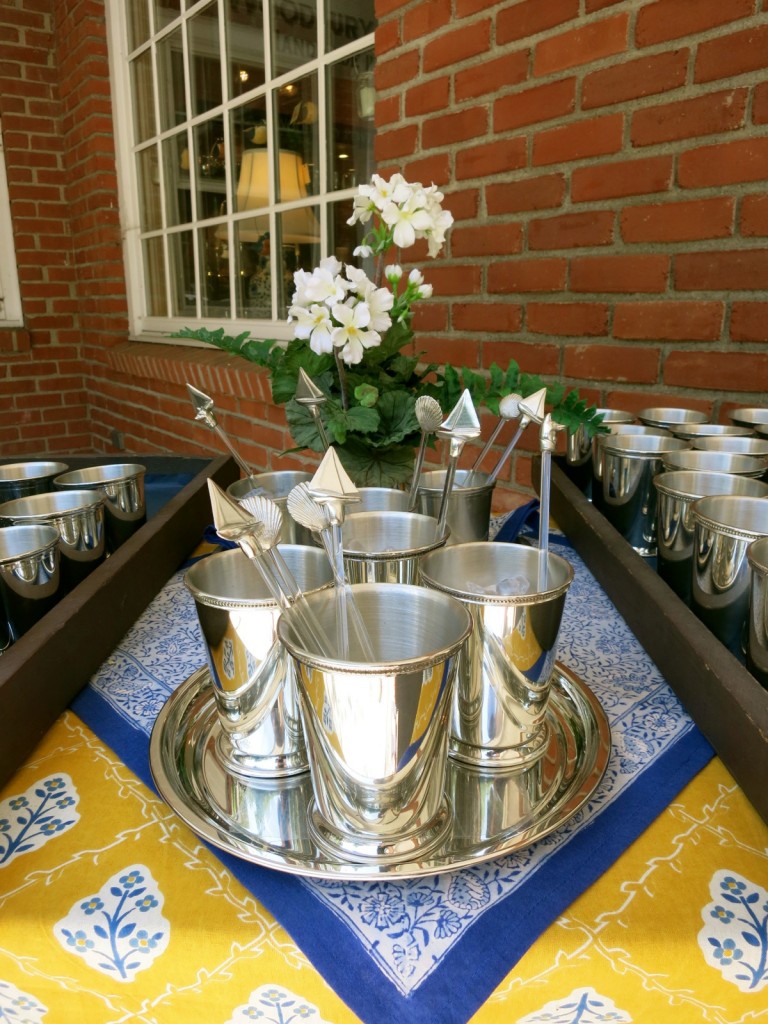 One of the only pewter factories in the United States, Woodbury Pewter, sits right on Main St. Think Colonial-era kitchen and these irregular matte-grey plates and mugs come to mind. 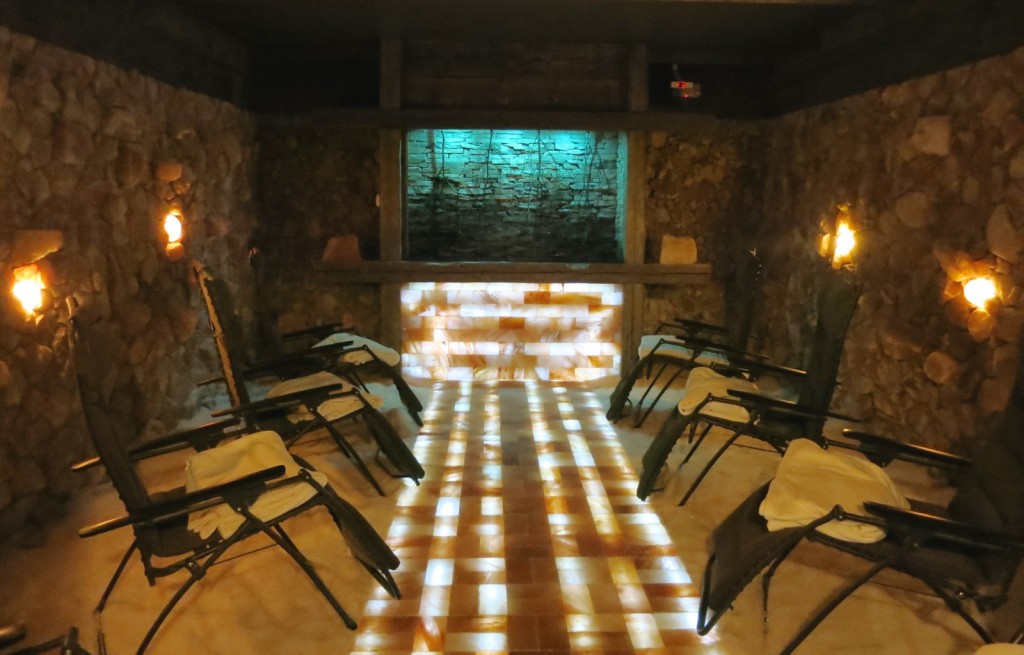 Sit in a “salt cave” on a “zero gravity chair” and breathe in the health benefits of one of “three elements that create a life force for the human body.” (Besides water and light).

Surrounded by salt (granulated on the floor, infused into the air, and salt blocks walls), a 45 minute session is purported to help alleviate sinus, allergy and repertory problems, and quite possibly other ailments. $40 for 45 minutes. Salt Cave open Tues-Fri 12-7pm, Sat 11-5, Sun 12-5. 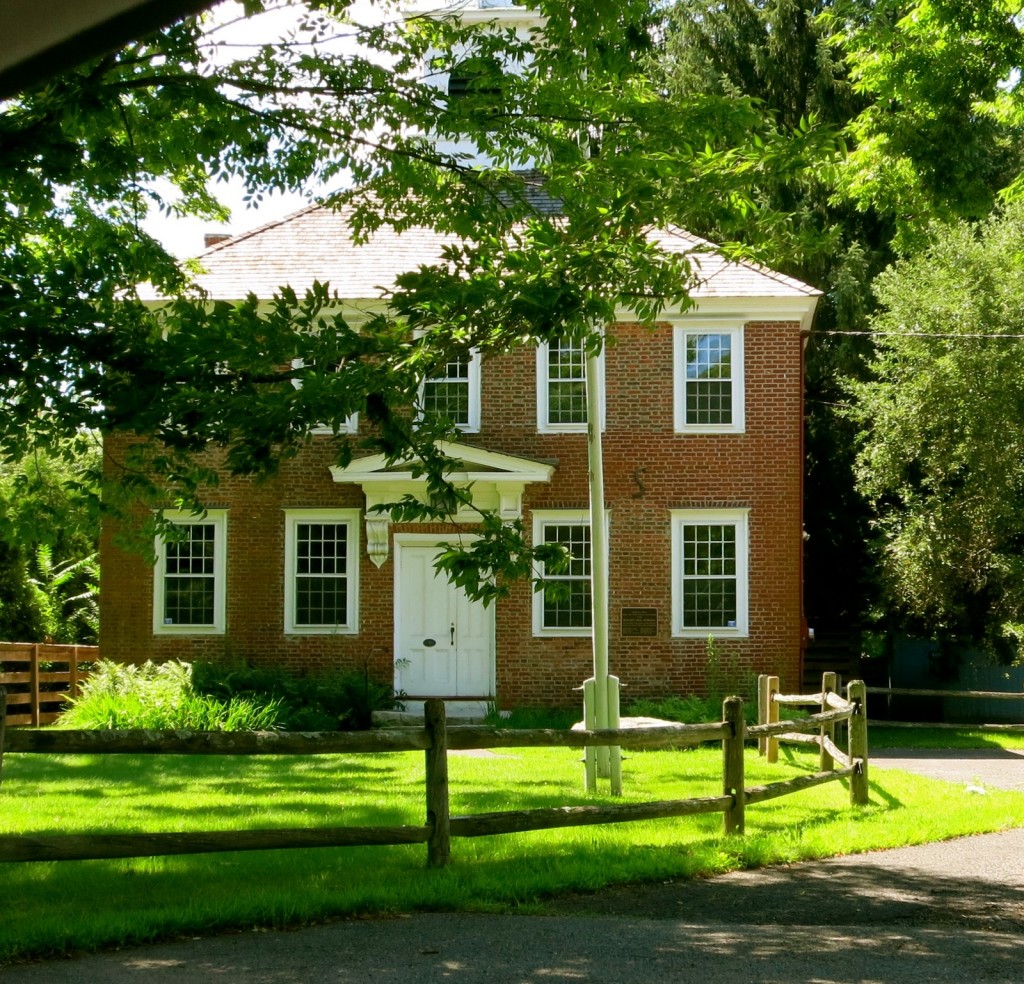 Built in 1789, The Bullet Hill School is one of New England’s oldest surviving brick schoolhouses. Earlier known as the brick school, it is thought to have acquired its name from a hill in Southbury where bullets were cast during the Revolutionary War. Classes were held here until 1941, and it is now used for local school programming. 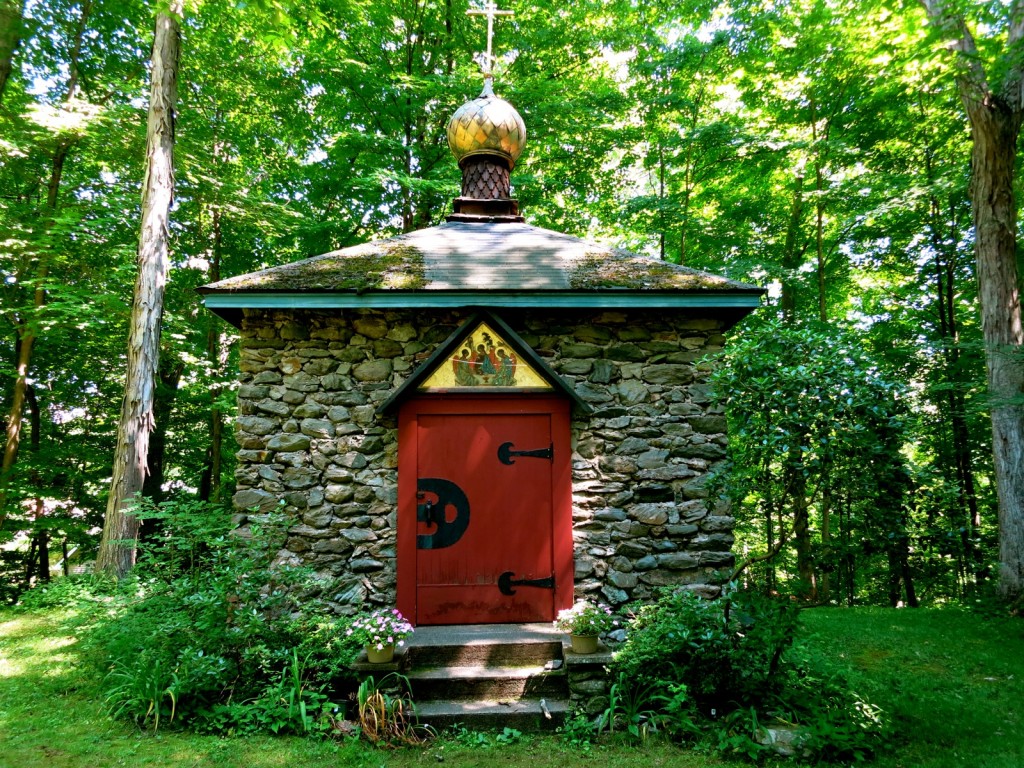 Two Russian writers, Count Ilya Tolstoy, the son of Leo Tolstoy, and Siberian novelist George Grebenstchikoff  established this slice of Russia in Connecticut in 1925. It was conceived of as an artistic community for those who fled to America after the Revolution of 1917. Visit, and the Russian Village calls to mind a fairy tale town hidden in the woods.

It’s unlikely that any descendants still live in this quaint, vaguely mysterious community (where every street is a dead end). Those who do live here dissuade tourists from ogling.

But you can still stop by to see the exquisite chapel that sits behind trees off to the left as you first enter the neighborhood. If it’s open, you can ask to see it. If not, take a picture and politely move on.

Restaurants in the ‘Bury’s CT 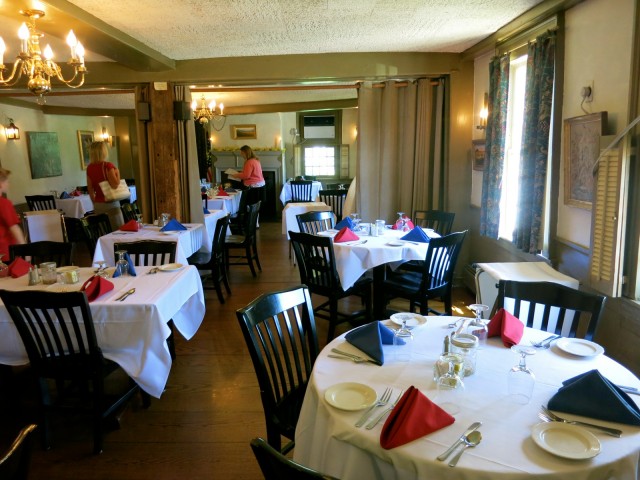 After a change of owners, The Curtis reopened as the 1754 House under chef Michael Bates-Walsh, who knows how to tweak classic New England fare with panache.

Market Place Kitchen and Bar, Carlito’s of Woodbury,  The Olive Tree, and John’s Café, which has won over no less than jaded New Yorkers.

Where to Stay in the ‘Bury’s 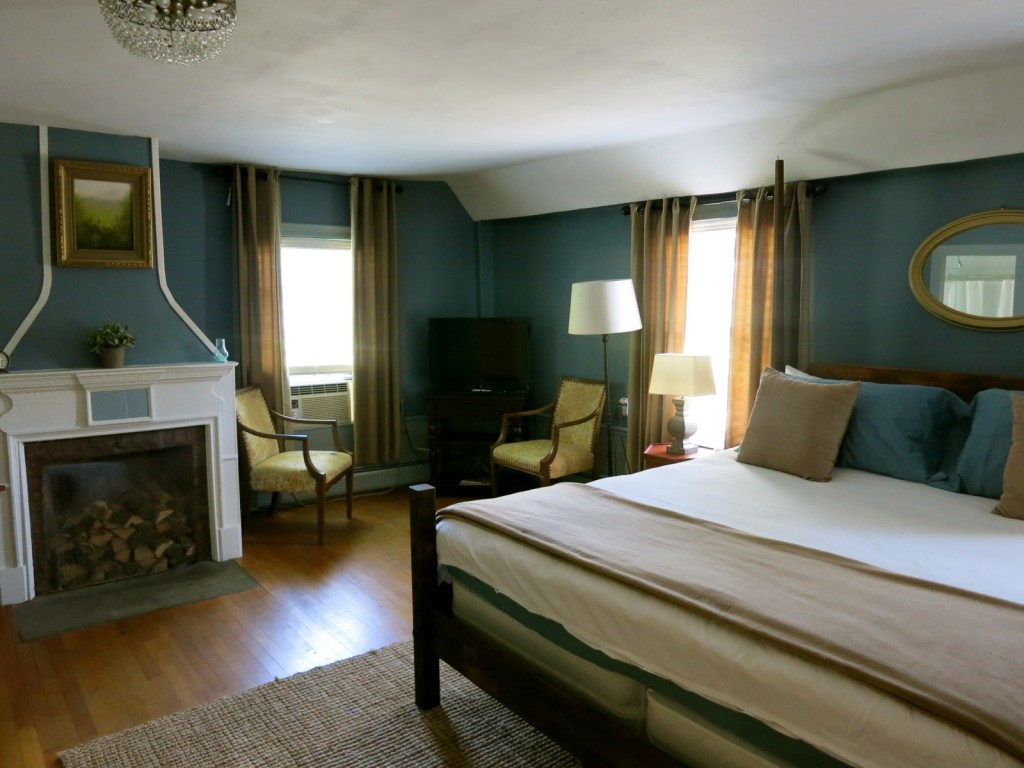 If all this antiquing and pewtering and eating is getting you tired, and/or if you’re in need of an inexpensive place to stay the night, book a room at 1754 House (formerly Curtis House).

Built as a home in 1736 and turned into an inn in 1756, it claims to be the Oldest Inn in Connecticut, but of course has been modernized to upscale standards. Newly updated rooms $135-$165 per night. Carriage House Rooms $115 per night.

Renovated roadside mom and pop motels are experiencing somewhat of a renaissance, and that goes doubly for this “inn.” Yes, it’s a motel, but with pillow-top beds, wi-fi, Keurig coffee makers, flat screen tv and fine furnishings, it’s more “boutique” than “roadside.” And the price is so right. Rooms starting at $89 per night.