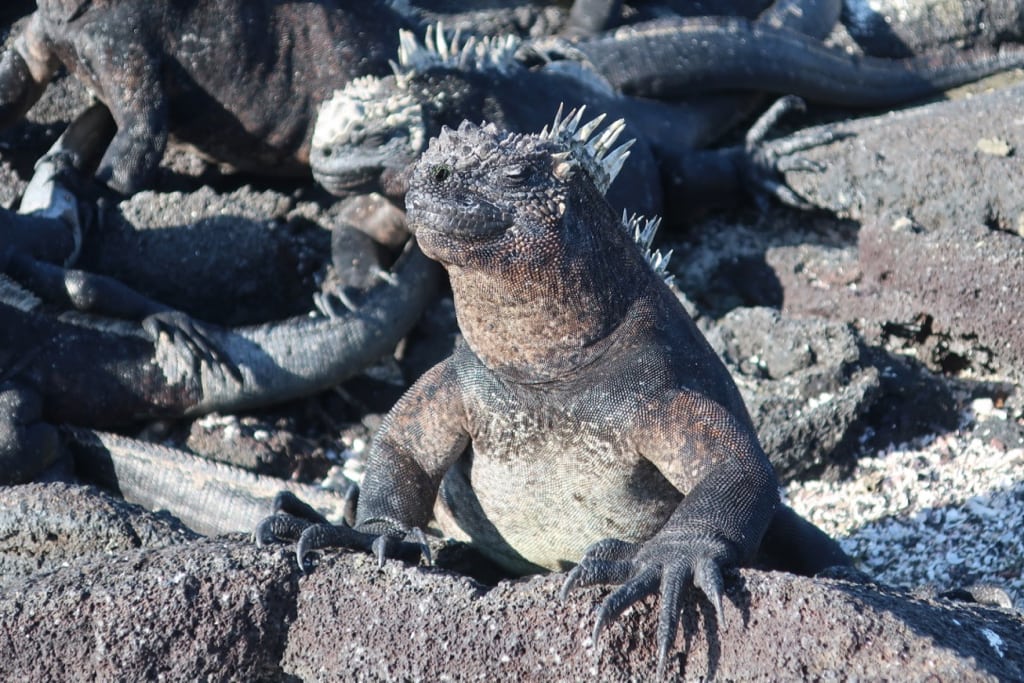 The Galapagos Islands have long been a bucket-list destination for nature lovers. If you long to mind-meld with Marine Iguanas, or watch puppy-like sea lions show off, these six larger and several smaller islands in the Pacific Ocean near the Equator deliver.

Born of fire, the Galapagos Islands were formed by volcanoes – and continue to be. But that is not what draws eager visitors here.

That would be the Blue Footed Boobies, Frigatebirds, Brown Pelicans, playful sea lions and fur seals, Lava Lizards, Marine and Land Iguanas, sea turtles and Galapagos Tortoises, Sally Lightfoot Crabs, penguins, Darwin’s Finches, and other wildlife adapted to this harsh life over 600 miles from the mainland.

In fact, when Charles Darwin arrived in the Galapagos in 1835 on a global voyage, he spent a bit over five weeks studying the wildlife – most of which had changed over time to adapt to this seemingly punishing environment. His observations led to his Theory of Evolution thus inspiring his book, The Origin of the Species.

Access to the Galapagos Islands is restricted to a limited number of visitors.  When it comes to environmental and conservation rules and regulations, the Galapagos wins the highest of praises. These have paid off in pristine habitats, healthy wildlife, and awe-stricken tourists who can literally dive into a world in which animals have no fear of humans. It’s an undeniably humbling experience.

Things To Do In The Galapagos Islands

Cruising is one of the best things to do in the Galapagos Islands, and definitely the preferred mode to explore. Boats can reach islands that airplanes can’t.

First Animal Encounters in the Galapagos

It doesn’t take long to be immersed in Galapagos wildlife once you arrive here. If you’ve ever been to the San Francisco waterfront in California, the docks on San Cristobal Island might feel familiar. With gobs of sea lions lounging on every inch of space. In the Galapagos, they are more willing to sidle up to humans (although locals warn you not to touch them – they bite).

Here, also, you’ll start to see Blue Footed Boobies and pelicans that are more specific to this place.

Rocks take center stage on this moderate hike. On the way, you’ll learn about all the ways lava flows – and how that impacts the cold stones it leaves behind.

See countless colorful fish, sea lions showing off, and the occasional reef shark on this easy beach access snorkel session. The fact is, every day, every minute, leads to wonderful surprises.

Rock formations were important navigational tools in the 18th and 19th centuries. Whalers and sea captains identified islands by these rocks and boulders. The Praying Monk is one of the most obvious, but there are many others.

Commune With Marine Iguanas on Fernandina

Just watch your footing on this black lava island teeming with black Marine Iguanas. The reptiles are so camouflaged, and in some cases, so concentrated in creepy numbers, you might (almost) step on one.

A marine environment- you’re also bound to see plenty of Sally Lightfoot Crabs – bright red and speckled yellow against the black lava rocks. Imagine – crustaceans this color before being cooked!

If you’re lucky, you can also get eyeball to eyeball the regal Galapagos Hawk. It’s so fearless, it won’t even flinch when a human gets within inches of its personal space.

And, of course, you’ll see the ubiquitous sea lions: some young ‘uns waiting weeks for Mom to return from her fishing trips.

Man has been making his mark – literally – in the Galapagos since at least 1836. See graffiti both etched into and painted on boulders, indicating that not Kilroy, but seemingly everyone else, was here.

As a protected National Park, the Ecuadorian authorities frown on such things, of course. But some people can be sneaky.

There is a post office of sorts – a barrel, really – based a Whaling Ship communication of old in Post Office Bay. Back in the 1800’s, when whaling crews pulled into the Galapagos, they would leave letters for their loved ones, hoping that departing ships returning home would deliver them. One of the coolest things to do in the Galapagos is continuing that tradition.

Leave a postcard with your name and address for a future guest to pick up. And, go through the stack already in the box to see if there’s a traveler who lives near you. Pick up their card and hand deliver it when you return home.

Bliss Out to Late Afternoon Sun at Punta Cormoran, Floreana

There is nothing so blissful as being bathed in the golden sunlight of a fading day: especially if said sunlight envelops a turquoise sea, soft sand, brown-black lava rock, and green hills.

Add to all that magnificent Great Blue Herons, swooping Frigatebirds, bustling Sanderlings, and, if you’re lucky, turtles emerging from the sand to run to the water, and you’ve got one soothing, euphoric experience. The sense is so ecstatic, it led one of my fellow travelers to exclaim, “I want to live right here. Starting now.”

Visit the private preserve of Montemar, and not only will you be privy to roaming giant tortoises, but you’ll find a pretty gift shop, beautiful bathrooms, and a coffee-tasting lesson.

Find one of a kind crafts at the gift shop – mostly recycled from trash or cast-offs found on the island. There’s a man who makes jewelry out of old broken skateboards. Another who fashions silvery figurines from ships chrome. Of course, you’ll find jewelry made from colorful plastic that washes ashore.

The old as Methuselah tortoises are left alone to meander these 40 acres, and are so not in a rush. Their pace is contagious, so you’ll feel your breath deepening and blood pressure dropping as you meander, too.

To stay in that moment – you can always reserve a night or two in an on-site Luxury Eco-Villa. Built of local stone, wood, and concrete – it’s a Zen escape from an escape.

Santa Cruz is home to 15,000-18,000 humans (depending on which source you use) – making it the most populated island in the Galapagos. It’s a jumping off point for cruising tourists (many of the 16-person cruise boats are anchored in the harbor), has a bustling downtown with some upscale galleries, and is home to the Charles Darwin Research Center and Giant Tortoise Breeding Center.

If you’ve been to a tortoise sanctuary (see above), be sure to come to this place. The shelled creatures here are more active and animated. Plus – you’ll see little ones just beginning what could be a 100-plus year old life.

While walking back to the docks, check out cool art in several upscale galleries. A small painting of a Blue Footed Booby might just call you to.

You’ve been startled by the number of Marine Iguanas on Fernandina. Now meet their more colorful cousins one by one on a hiking path at Cerro Dragon (Dragon Hill). Their scaly, dimpled hides, sharp claws, and beady eyes indeed bring to mind those larger fire-breathing creatures from ancient tales.

If you’re lucky, you’ll also witness flamingos sucking at the mud for dinner. Their beaks make a clicking sound as they wade and feed – a most unusual experience for those of us who only know these elegant creatures as plastic lawn ornaments.

This area of Santa Cruz Island also is host to an abundance of strange prickly pear cactus trees – like their Southwest US versions, but with soaring tree trunks. Adaptation in action.

How to See the Galapagos Islands

No matter how you get to and around the Galapagos, it’s not exactly cheap. It is a bucket-list destination after all.

While land-based tours are the most economical (averaging $340 per person per day), that doesn’t include the cost of flights to Ecuador, and on to the Galapagos. Plus, you won’t see as much wildlife as you would on a cruise.

For a massive splurge – book a week on the Silverseas Silver Origin, built in 2020 specifically for the Galapagos. The cost for the week per couple starts at around $21,000 – but includes airfare from your home, three nights in luxury hotels pre-and-post cruise, all transfers (even limo service from your home to airport), luxury digs, all excursions, including deep-sea snorkeling and nature hikes, and of course all the fantastic food and premium drinks you can handle. The service is warm and impeccable. But yes, this experience of a lifetime will cost you.

2 thoughts on “Great Things To Do in the Galapagos Islands”