WHY GO: Haddonfield NJ is best known as the spot where the first complete dinosaur skeleton was discovered in the USA – back in the 1800’s. But this small suburb of Philly – a 20 minutes drive away – is also known for its fantastic shopping and exquisite downtown.

This would most likely have thrilled its namesake, 21-year-old Quaker woman, Elizabeth Haddon, whose father, John, purchased 500 acres in New World. Due to illness, John Haddon was unable to leave England. So, in 1701, he sent his formidable daughter, Elizabeth, to New Jersey. All by herself.

This sense of women’s independence has carried through the generations here. Many downtown establishments are Women-Owned. Unique shops line downtown streets so precious and picturesque, they’ve been compared to a Dickens scene – especially during the holidays when the town is aglow with candlelight.

It’s a Truman Show kind of place where locals actually say “good morning” to strangers and engage with parents and kids on the daily “Walking School Bus.” This procession takes residents past brick storefronts and beautiful stone churches to blocks-away Elementary, Middle and High Schools.

Lately, town officials have made small adjustments to tradition in order to draw younger crowds – scheduling Food Truck rodeos, wine tastings and “Girls Night Out” events. Park your car once and you can walk everywhere. There’s a fantastic Cooking School, unique shops (one owned by the son of a famous actor), history, and good restaurants. Follow along with us….

Things To Do In Haddonfield NJ 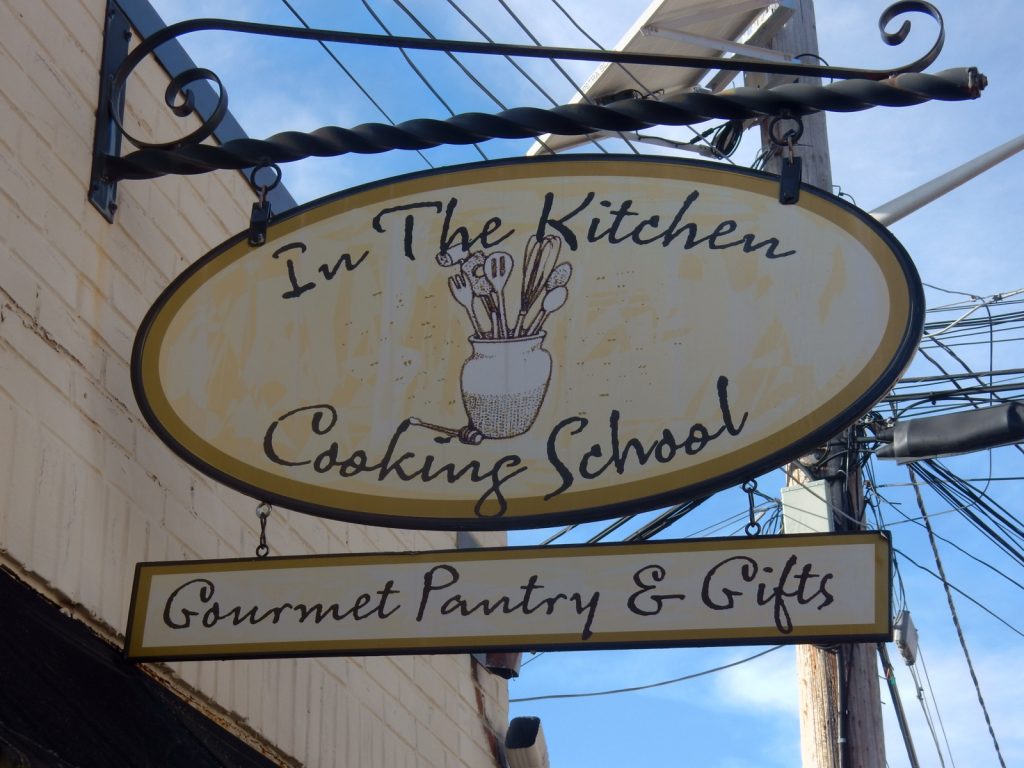 DO: Cooking Class at In The Kitchen Cooking School

Chopping, basting, and whipping foodstuffs is so much fun with Chef Kathy Gold barking orders. Well, not barking so much as guiding with humor and encouragement around the big marble island in her demonstration kitchen.

Gold left her job in investment banking for the more “soul satisfying” business of cooking. She’s never looked back. Gold opened up this recreational cooking school in Haddonfield in 2005 and it’s been a hit ever since. Locals and visitors come back time and time again for the camaraderie and to learn new skills.

Chef Kathy’s instruction method boils down to, “bring the wine (for the meal) and we’ll have some fun.” She teaches the fine art of food preparation – e.g. Indian, Italian, Holiday cuisine – sometimes by sight, sometimes “au pif” – by the nose – but always simplifying for those of us who find it challenging to boil eggs. 3-hour classes run six nights a week (and Sunday afternoon) and cost $70, which of course includes the meal. RSVP required – sign up online.

Named after the friendly Lenape Indians and built in 1750, this colonial tavern and inn is the site of the signing of the NJ Constitution in 1777, when New Jersey changed from colony to State. In 1903, it was deemed New Jersey’s first State Historic Site. Now, docents lead you through the dark rooms, telling “tavern tales” and reminding visitors of those raucous and tumultuous times. Open Sat 10-12, 1-4.

According to the history books, Haddonfield NJ is, incredibly,  “Ground Zero” for dinosaur paleontology in the Americas. The first nearly complete skeleton of a dinosaur was unearthed here in 1858, at what is now Hadrosaurus Park – east of Grove St. at the end of Maple Ave.

Hadrosaurus foulkii – a late Cretaceous duck-billed dinosaur – is rendered as the 12-foot bronze statue, Haddy, unveiled in 2003 in a little pocket park on Haddonfield’s main street. What happened to the actual Hadrosaurus skeleton? It’s on exhibit at the Academy of Natural Sciences at Drexel University in Philadelphia.

“People can buy everything they want on the internet,” says Wild Violet Natural Specialties owner, John Picking. “They don’t really ‘need’ a town like this.”

But storeowners here get to know customers, and really love it, and it shows. The following shops are Maven Picks:

It’s “man cave meets general store” at this eclectic, male-centric boutique where you’ll find everything from shaving products to 1940’s woolen caps and Paul Bunyan flannels. Mitch and Marina Gorshin opened their family-name-brand shop to address the paucity of purveyors for men on the block.

This flare for drama and branding isn’t too surprising. After all, Mitch is the son of actor Frank Gorshin, known to Boomers as “The Riddler” on the Batman television series.

Come into Wild Violet for your gluten free vegan and healthy habit loved ones. And, oh yes, CBD Oil.

Speaking of Gluten-Free, Posh Pop bakes yummy cakes and cookies without any gluten at all.

This Traditional Italian spot is as small and intimate as its portions are big. Hand made pastas, creamy risotto, and braised short ribs shine here, but if it’s your first time, order the signature Chicken or Veal Parmesan.

I was talked into ordering it, and was glad I did.  Crispy, succulent, gooey, sauce bursting with flavor – I scarfed down nearly two whole chicken breasts down in one sitting. No wonder it’s won Readers Choice Awards from a variety of publications.

This family-owned Mediterranean restaurant (a mash-up of Israeli, Greek, Turkish, Southern France and Sicilian cuisine) dishes out the one of the best Lamb Kabobs I’ve ever had. And that’s saying a lot. I love lamb.

In fact, Zaffron specializes in Lamb Shanks. Its signature Chicken “Lula” Wrap with tzatziki and Cold Bean Salad are also outstanding. Find Warm Octopus Salad, Israeli Salad, and a host of fresh and freshly-made dishes in this Cheers-like Mediterranean-fusion eatery where everyone seems to knows everyone.

When asked, most Haddonfield locals claim that there is not one bad restaurant within town limits. That said, these came up time and time again. Two Fish for “5-star” seafood,  Denim byob for New American, The Little Hen for authentic French cuisine, and Leaf for Vegan.

STAY: Most visitors make this a daytrip from Philadelphia. But for those coming from far away, stay at the Crowne Plaza, Cherry Hill, about 2 miles away.

3 thoughts on “Haddonfield NJ: A Dickens Christmas of a Town”