WHY GO: Why is Essex, CT is one of the most popular yachting towns in the Northeast USA? Because it’s located on the flat out stunning Connecticut River, deemed one of 15 wetlands “of international importance,” where Bald Eagles have returned in droves.

The Connecticut River and Essex in particular was, if not the center of the maritime universe, a prominent player in United States history. The first battleship ever to be built in North America, the Connecticut Warship Oliver Cromwell, was designed and launched from Essex in 1776.  The American Turtle, the world’s first submarine, created to blow up British ships at anchor during the Revolutionary War, was built on a now-washed-away island nearby.

Stay in the oldest continuously operating inn in the USA, dine on Farm-to-Table cuisine, wander around yachts on the waterfront, and soak up natural beauty and fife and drum American history in this singular New England riverside Getaway.

Things To Do In Essex, CT

STROLL: Essex has the kind of Main Street made for idyllic, patriotic commercials. And for idle strolling. Small picket-fence framed homes in muted colonial colors – grays, browns, mellow yellows – marked with name and date of original owner, seem lovingly occupied despite packs of tourists (and locals) that ramble within a few feet of front doors

VISIT: Connecticut River Museum.  After the Revolutionary War when the United States began to establish international trade routes, Essex was a hub of the New York Packet Trade.  What is now the Connecticut River museum was first erected in 1873 as a warehouse when the town was a key stop on the way to Hartford, Providence and New York City for people and cargo. On the main floor, you’ll find a trunk from the Oliver Cromwell, its lid carved with the symbol of the new Republic – an eagle.

Oil paintings and models of ships, along with a rare navigational chart from that time in history cover the walls.   And smack in the center of the room is the original pulley system, used to unload steamboats bulging with cargo, which runs through trap doors to the third floor. Elephant tusks from Zanzibar (to supply the billiard and piano factories down the road in Ivoryton), sugar cane, tobacco, coal and other needed supplies were warehoused here.

You can sit inside a replica of David Bushnell’s American Turtle, the world’s oldest working submarine, built in 1776 to blow up British ships in New York Harbor. Interpretive signs tell the story of “the best kept secret of the American Revolution.” The full-scale model of the American Turtle looks no larger than a whiskey barrel and gives the visitor a visceral sense of the risks our forefathers took to claim our country’s freedom. ($8 adults, $5 child; Tuesdays: 11 AM – 5 PM; Wednesday – Sunday: 10 AM – 5 PM., Mondays Memorial Day through Labor Day only).

Now, each 22-mile pleasure trip requires three tons of coal, hand-shoveled into the firebox by a hearty “fireman.”  You can travel in luxury, in a 1930 Pullman Parlor Car, with plush green swivel chairs and waitress service. The train drops passengers off at The Becky Thatcher, a 65ft, 45-ton paddle wheel boat built in 1961 in Ft. Lauderdale, FL in someone’s back yard.  She chugs upriver to East Haddam and the Goodspeed Opera House, and then turns around and heads back to the train. (2 ½ hours; $29 adults, $19 kids).

TOUR: Griswold Inn Art Tour. The Griswold Inn contains the largest marine art collection in private hands, most collected by the prior owners from the 1890’s to the 1990’s. And these walls can talk, with paintings and prints that tell stories of Connecticut Valley history and the steamboating era.  Complimentary hour-long tours (limited to 40 people) runs select Sundays in late Fall, Winter and early Spring and begin at 5pm in the wine bar with tastings. Check the Inn’s calendar, book your room on Sunday and enjoy the evening’s tour for a one-of-a-kind getaway.

Where To Eat In Essex, CT 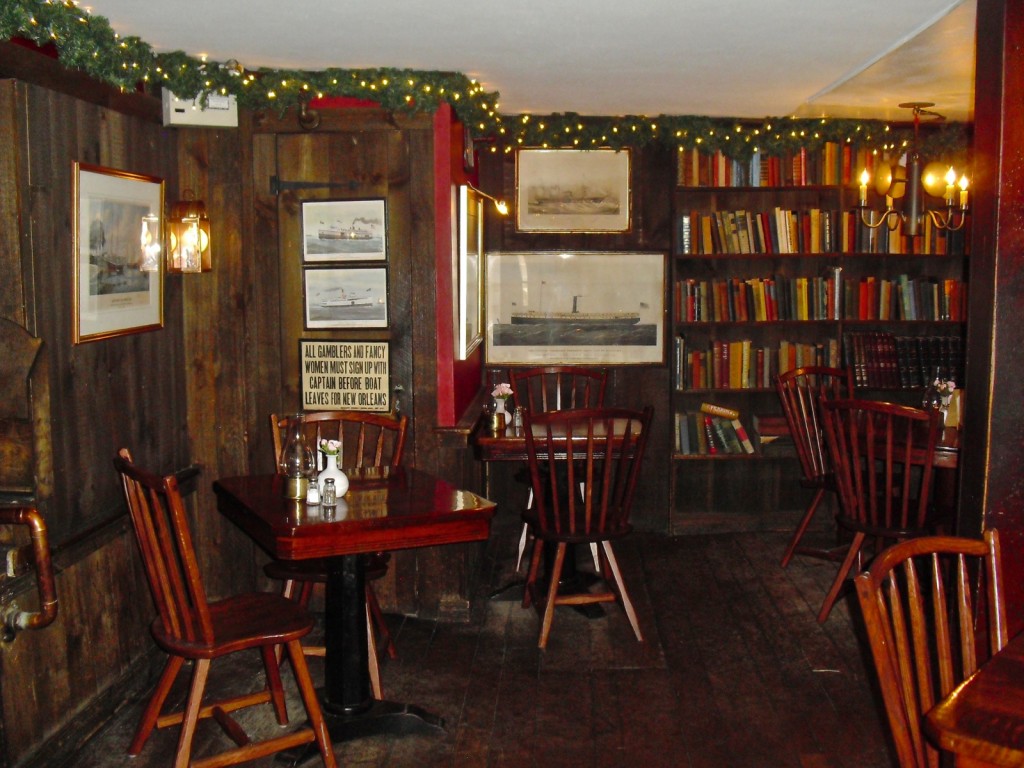 EAT: Griswold Inn. Begin in the more contemporary Wine Bar for a drink and nibbles – and don’t forget to ask the bartender to “turn on” the painting behind the bar. The 1880’s Essex scene rocks slowly back and forth, and though it used to be in constant motion, drinking patrons would get seasick.

With quirky drinking dining rooms that include an old New Hampshire covered bridge and a 1738 schoolhouse, the interior of The Gris is a curiosity PT Barnum would have adored. The Sunday Dixieland Brunch is the best deal around; just $20.95 per person for all you can eat between 11am-1pm. 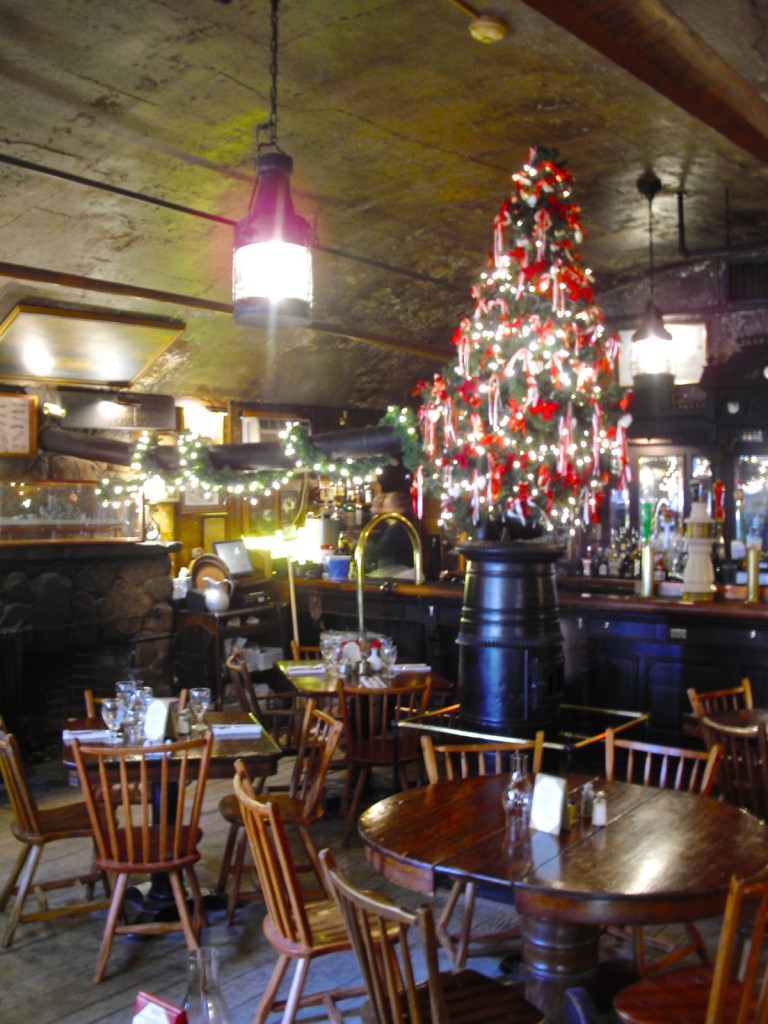 DRINK/DANCE: Griswold Inn. There’s live music every night, and a continuous party guaranteed to make you happy. In a Home Boys Make Good story, a producer for Monday Night Football heard the Shiny Lapel Trio – a Stray-Cat rockabilly band guaranteed to get you off your feet – and signed them up to play the MNF opening show.  You can jitterbug to their sound, or, depending on the day, listen to Dixieland Jazz, Sea Shanties, and other rollicking tunes. The Gris Tap Room always makes The Best Bars of America lists. A night in revelry there should be on everyone’s bucket list.

Where To Stay In Essex, CT

STAY: The Griswold Inn – known locally as “The Griz.” Before the ink was dry on our Declaration of Independence, and while American’s first warship, the Oliver Cromwell was launched down the street in June 1776, the Inn welcomed its first guest.  It is one of the oldest continuously operating inn in the United States, and has been in the hands of only six owners in 245 years. Rooms are beautifully redone, burnished wood floors, area rugs, four-poster beds and nautical art. ($155-$360 per night with midweek specials).