WHY GO: If you’re a Mark Twain fan, you don’t even have to ask. To many, Elmira NY and Mark Twain are forever linked in history. How? Read on. 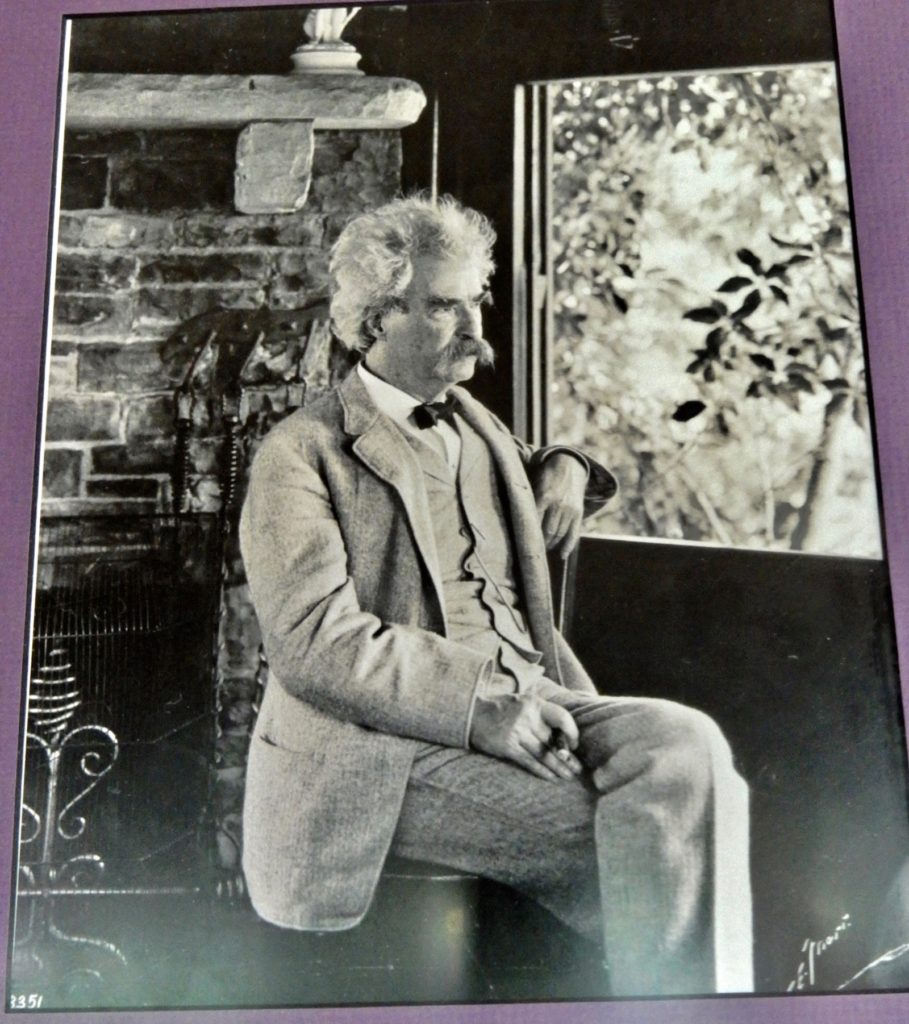 Things to Do in Elmira NY

All Mark Twain (Samuel Clemens) devotees will want to step right in to where America’s best humor writer and social critic did much of his thinking, writing, and cigar smoking.

In fact, some of the most important works in American literature, including the Adventures of Tom Sawyer and Adventures of Huckleberry Finn, were predominantly written in this gazebo-like study, now on the campus of Elmira College.

Why Elmira NY? This is where Twain’s beloved wife, Olivia, was from. And it’s where they spent most summers after they were married.

Why on this college campus? In fact,  the Study didn’t start off here. 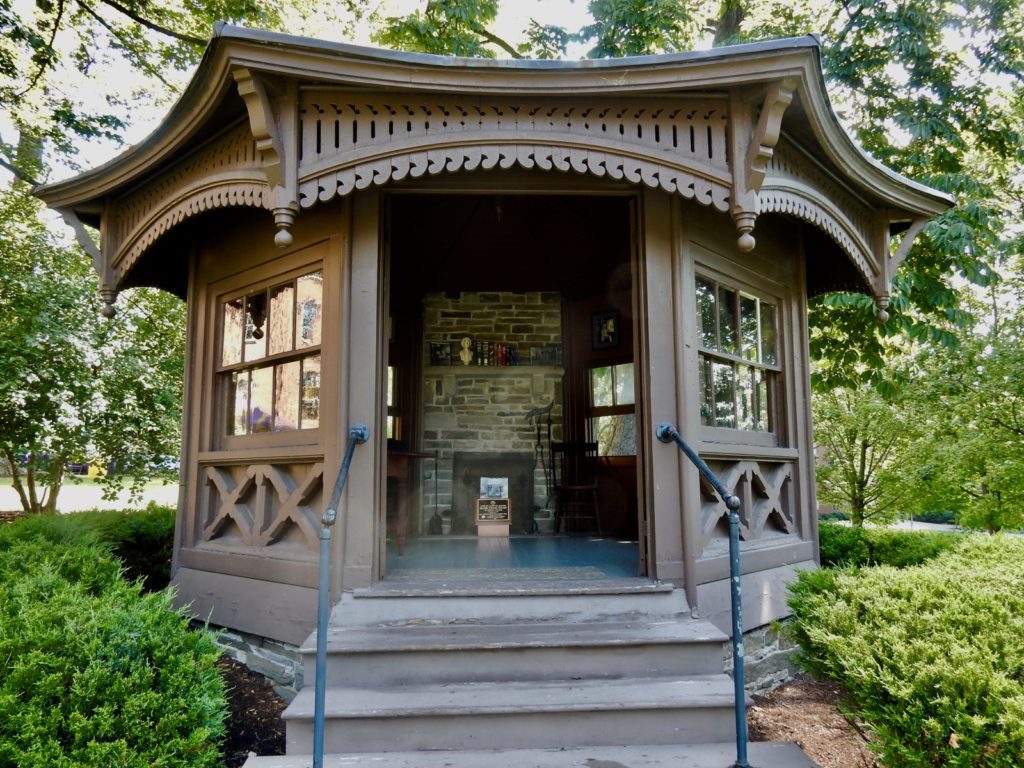 A short history. Mark Twain was born Samuel Clemens in 1835 in Florida MO. Enamored by river life, his first first job was riverboat pilot. But then, the Civil War made travel on the Mississippi River impossible.

So, Twain moved out West to work in the mines. But he discovered that writing for the newspaper was a better fit. He had a great knack for travel writing, so was thus hired to cover “The Grand Tour” to Europe and the Holy Land on a maiden steamship voyage. 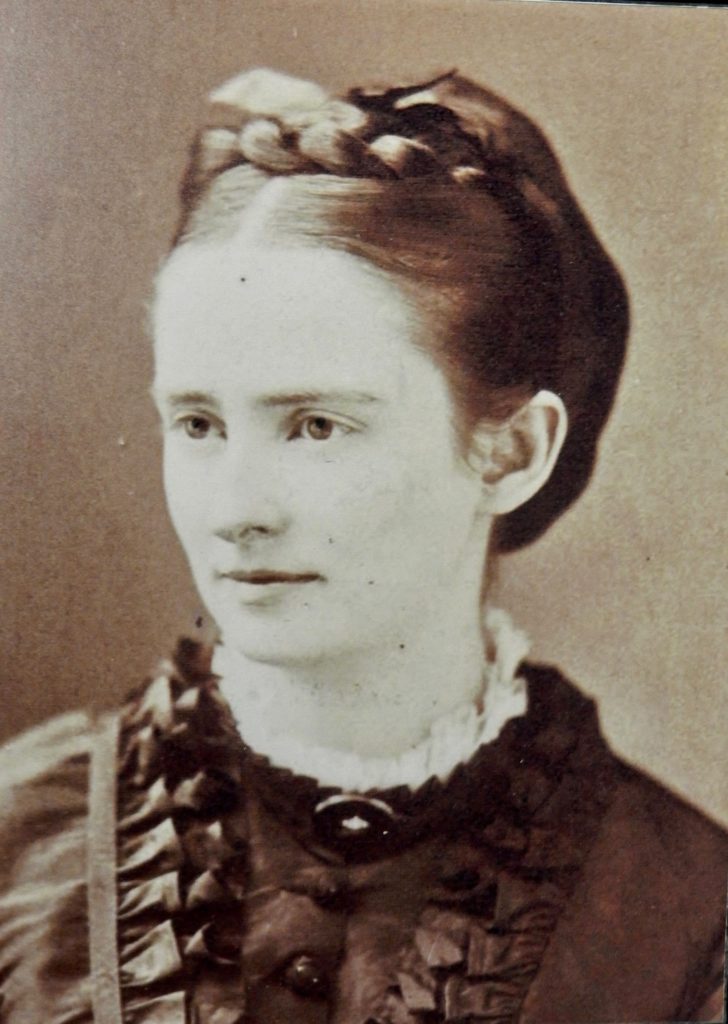 While on board, Twain met 17 year old Charlie Langdon who was from a wealthy logging and railroad family. ( The Langdons also happened to be staunch suffragists and abolitionists – Frederick Douglas was a friend).

Charlie showed Twain a picture of his sister, Olivia.  Twain was so struck by her beauty, he traveled to Elmira NY to court her upon his return from abroad.

Olivia’s father was suspect of this man with the reputation of being an unambitious sloth and heavy drinker, and turned him away. Twain continued to write to Olivia anyway (150 letters). A year later, he proposed again. However, this time Olivia’s father saw the genius in his daughter’s choice. “Take the girl,” he told Twain.

History of the Study 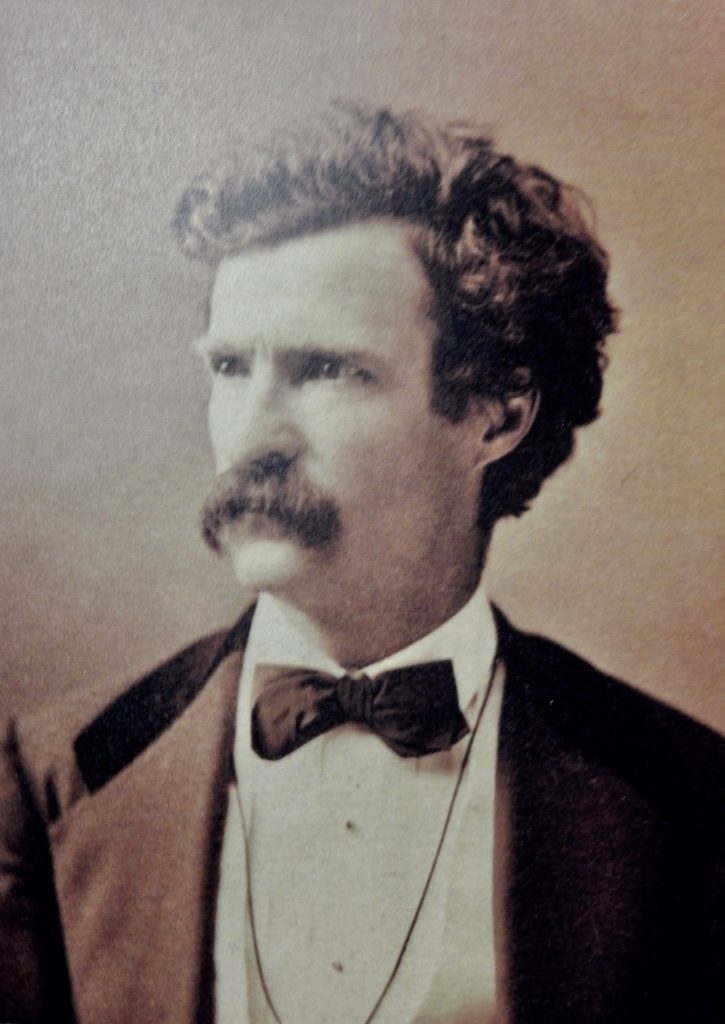 Mark Twain made a lot of money from the book he wrote about that Grand Tour. Innocents Abroad provided him with the funds to build a house in Hartford CT.

Olivia’s sister, Susan Crane, had a summer home, called Quarry Farm, near Elmira NY, on the Chemung River. In 1871 Crane invited Olivia and Samuel for the summer – a three month stay that became an annual tradition.

By 1874, it seemed that Twain’s cigar smoke had so annoyed everyone in the house, the family built him a stand-alone study in the shape of a steamboat pilot house. Perched on a bluff overlooking the Chemung River, steps from the family residence, Twain could smoke to his heart’s content. 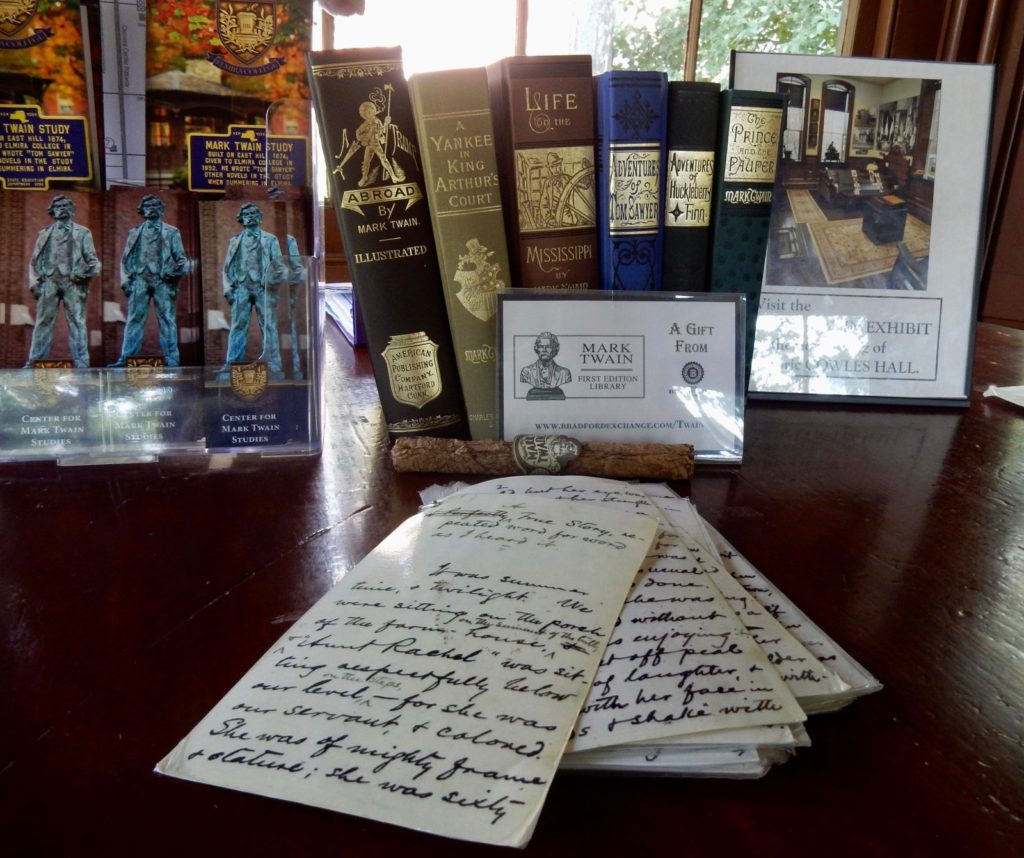 Mark Twain and his family came up to Elmira for 20 consecutive summers. And by all accounts those summers were the most productive and happiest of his life.

But Twain’s later years were wracked with tragedy. His first-born son died at age 1 ½. And two out of three of his daughters, and his wife Olivia, passed away before he did. 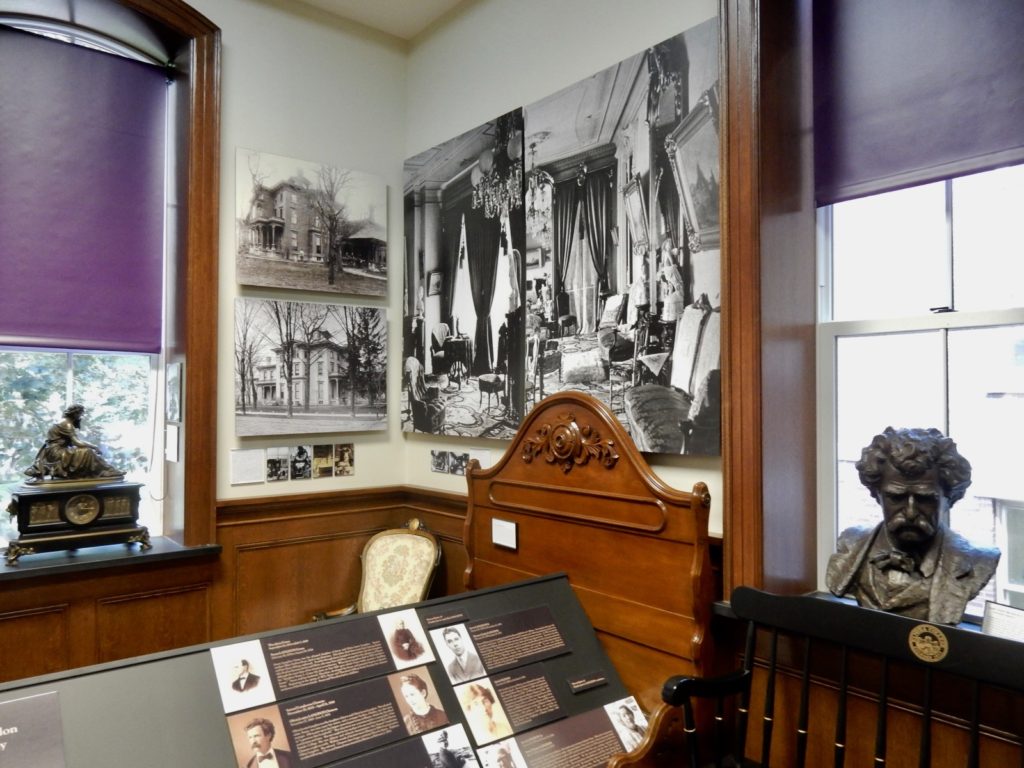 After Mark Twain’s death in 1910, the Langdons still owned Quarry Farm. Crowds of fans made pilgrimages to the property out of curiosity and for inspiration. Strangers traipsed on the Langdon’s private land daily.

To rectify this, Twain’s niece, Ida Langdon, a professor of English at Elmira College, arranged to move his Study 2 ½ miles from Quarry Farm to the Elmira College Campus.

In 1983, Quarry Farm was bequeathed to the College as a “Scholars Retreat,” where those studying Mark Twain literature now stay for two week sessions. 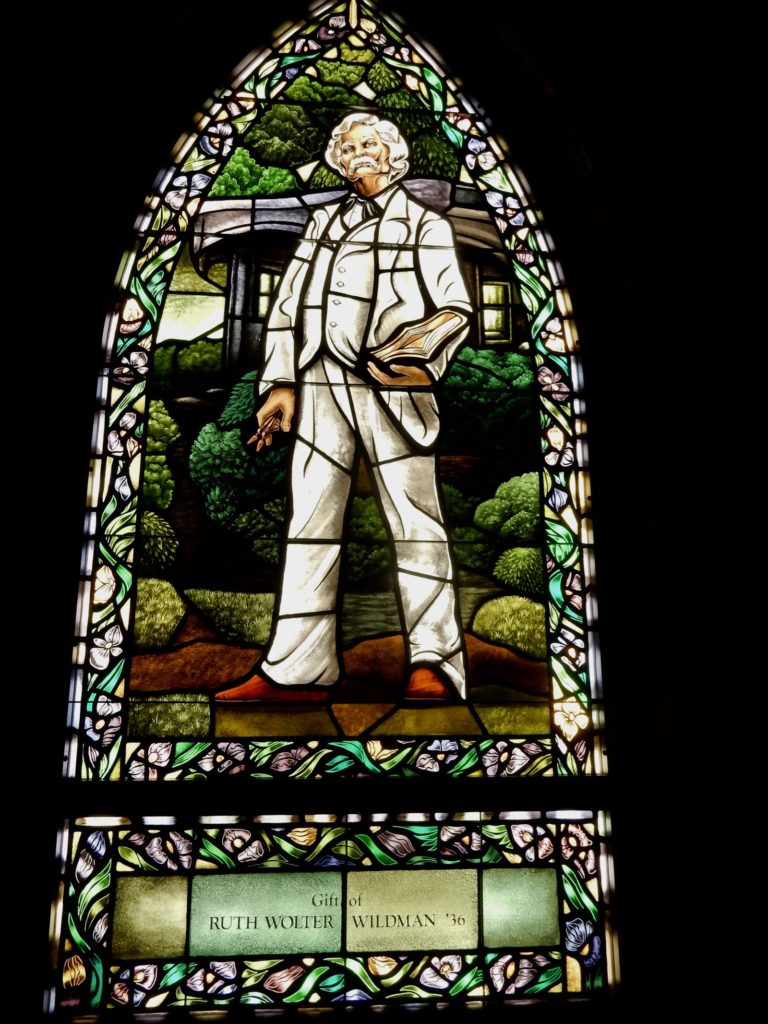 Continue inside Cowles Hall. Inside, you can examine artifacts and papers focusing on the academic side of Twain, and both the Clemens and Langdon families. See Livvy’s bed, Twain’s lap desk, and other personal items, along with photos from the area.

Step into the Chapel to see Olivia and Samuel Clemens in stained glass – just two panels among many others. Open May-Labor Day, Tues – Sat. 9:30-4:30, Labor Day – Oct 15, Saturdays only, Free. 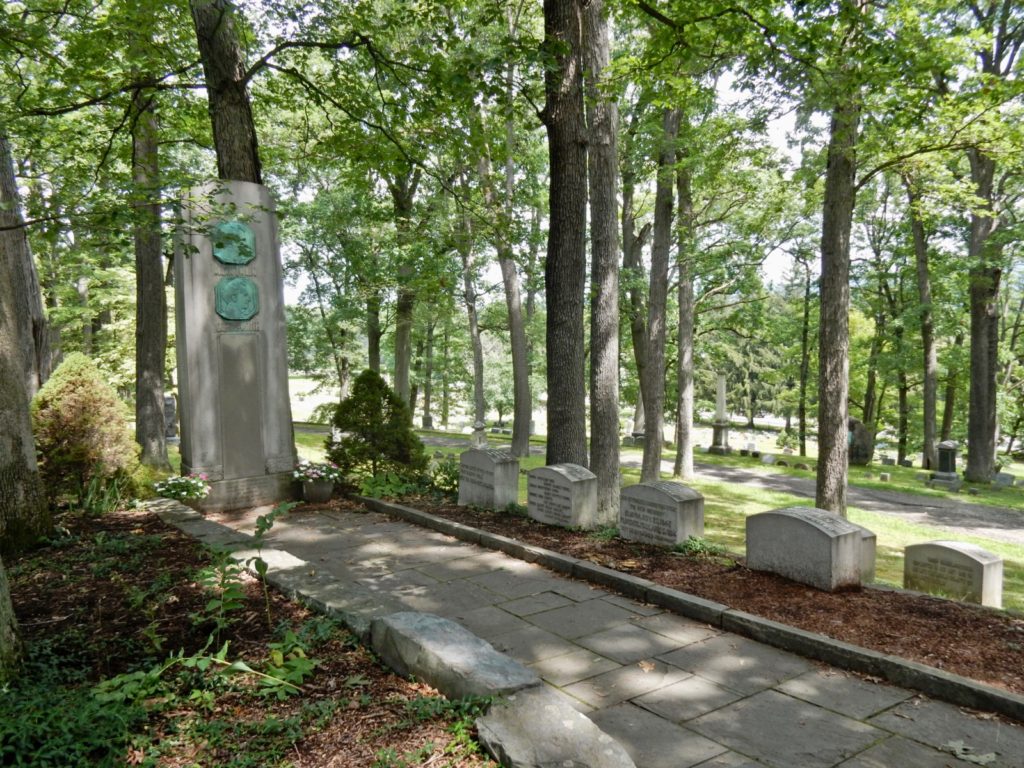 Twain’s grave, inscribed “Samuel Langhorne Clemens – Mark Twain,” is one of the most visited in the country. Though he died in Redding, CT, Mark Twain is buried with Olivia, and all of his children, including the one daughter who outlived him – Clara.

By most accounts, Clara had a happy first marriage with Ossip Gabrilowitsch that ended at his death. But the second, to Jacques Samossoud, a womanizer who stole her money, was anything but. Yes, Samossoud is buried there, however, you won’t see his name anywhere. The family did not arrange for his name on any tombstone.

Clara had only one child, Nina, a troubled daughter who overdosed on drugs in middle age age. Olivia and Mark Twain have no direct descendants. 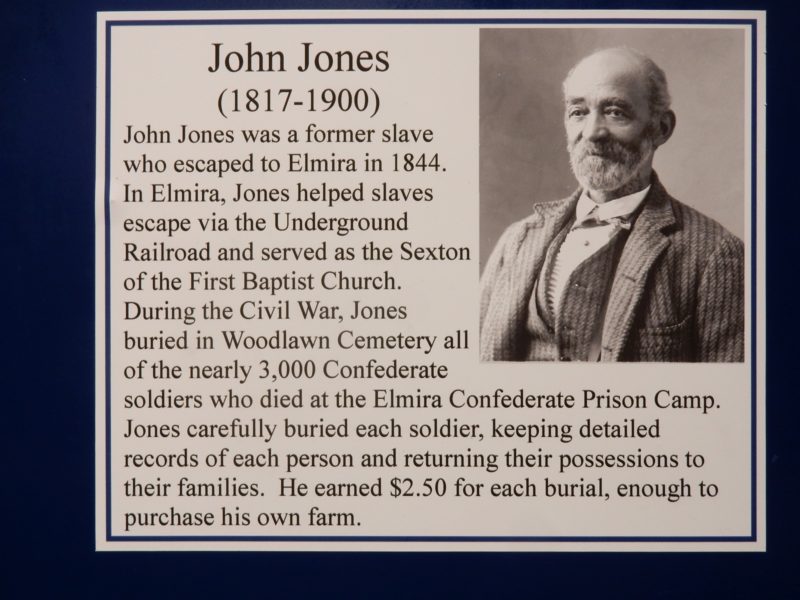 Look, also, for the grave of John W. Jones.

Jones was an escaped slave from Virginia who, it was believed, helped 800 enslaved people to freedom on the Underground Railroad. He reconnected with his wife in Elmira. The community was so welcoming, they appointed him Sexton of this graveyard.

Inconceivably, Elmira’s Woodlawn Cemetery was the final resting place of many Confederate soldiers, as Elmira had the Northernmost Civil War POW camp.

Jones took great care to respectfully bury those Confederate soldiers along with their personal possessions. He wanted to make it easier for grieving families to find their sons. Amazingly, legend has it that Jones returned to his past enslaver in Virginia to let him know that his son had died in New York.

This 60 minute narrated trolley tour brings you to Twain’s Study, and highlights his connections to the area. Leaves from the Chemung Valley History Museum. $8, $4 kids, July, August, Tues-Sat, 10-2, departing on the hour. 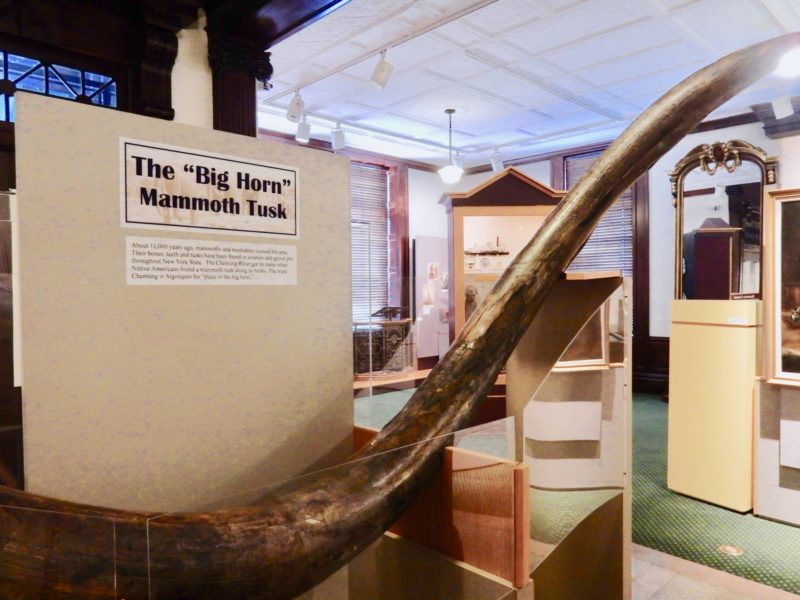 This region is replete with important history – both natural and man-made. See “The Big Horn” Wooly Mammoth Tusk from one of many that roamed upstate NY 11,000 years ago, and plenty of artifacts and photos from the Langdon and Clemens Families.

Where to Eat and Stay 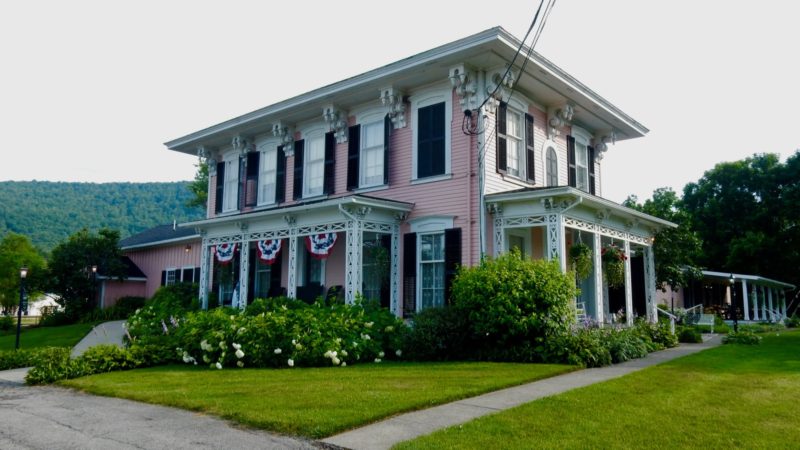 Keuka Lake (one of the Finger Lakes) is about 20 minutes away. You’ll have the added advantage of staying near the wineries and in an establishment with a top restaurant attached.