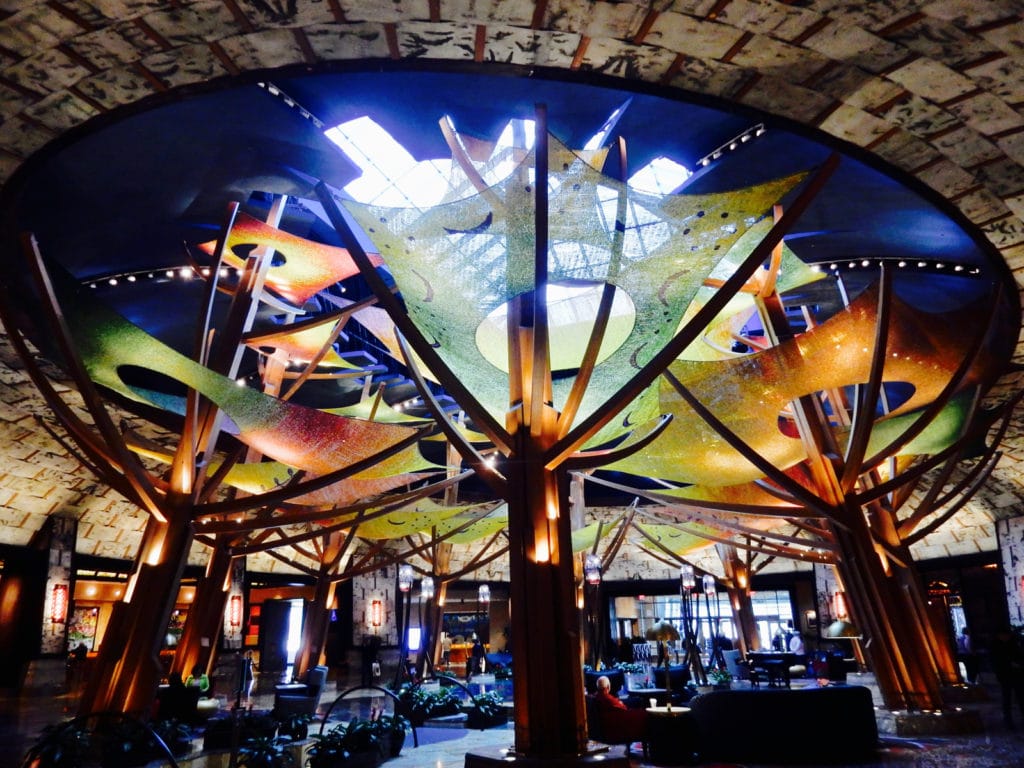 The soaring geometric glass towers of Mohegan Sun Resort and Casino appear suddenly – and startlingly – as you round a curve in the remote rolling hills along the Thames River in southeastern Connecticut.

One of these modernist towers now houses Aspire, a “hotel within a hotel” with renovated rooms, butler service, complimentary breakfast, lunch and dinner, a “welcome gift,” and a quiet 4-table Blackjack room. I visited on a quiet January Tuesday to check it out.

Mohegan Sun, owned by the Mohegan Tribe, opened in 1996. It was the second “Indian Casino” to rise in Connecticut. (Foxwoods, managed by the Mashantucket Pequot Tribe ten miles away, was built in 1986.)

The first time I approached the modernist towers of Mohegan Sun in 2002, I was, I admit, cynical. How does this glass and mirror Oz embody the essence of Native American culture? (Especially since gambling is the “Indian Casino’s” reason d’être). What do slot machines have to do with reverence for Mother Earth? Or for adhering to Tribal customs, for that matter?

And then, I walked in. Embellished with bead and bark designs, roaring waterfalls, a 25 ft. tall Chihuly glass centerpiece, and with two hotel casino towers identified as “Earth” and “Sky,” Mohegan Sun is arguably the most dazzling gaming resort in the country. And yes, its interior design celebrates the local Native American heritage in the most exquisite and spellbinding ways.

The Tribal owners/managers of Mohegan Sun are so adept at building and running casinos and entertainment resorts, in fact, they are seeking to expand by acquiring or partnering with others around the country . “The Tribal Members want to be right there with the Wynn’s and Caesar’s,” says a company spokesman. “They consider this a family-run business.”

There are 1,600 hotel rooms at Mohegan Sun, divided between the Sky Tower (1,200 rooms with 200 suites), and Earth Tower (400 rooms). Aspire, carved from the Sky Tower’s former VIP levels, is the Casino’s exclusive luxury lodging.

As a Preferred Hotel, the guest experience at Mohegan Sun is already high-end. But Aspire takes it to another level. Literally. Aspire guest rooms and suites are situated on floors 31 and above.

Guests notice the difference right away. During private check-in, staff asks a barrage of questions. Do you require your food and beverage butler at the moment? Would you like to schedule a meal brought to your room after 11pm when the 33rd floor food service ends? What time would you like to check out? Late? 2pm? Absolutely fine.

Aspire rooms are accessed by a dedicated (but hardly discreet) elevator found among six others in one of two Sky Tower elevator banks. Part of the Mohegan Sun Resort complex, the public is free to wander around the breathtaking lobby. However, guests of the lower Sky Tower Hotel and those lofty Aspire floors must pass two levels of security: the first a manned guard at the elevators, and the second a room key card to activate the elevator.

It’s conceivable that Aspire guests could rub elbows with a high roller or two (for them, rooms are comped or drastically discounted), or a celebrity performing in the Arena that night. No celebrity sightings for me. As for high rollers, I just didn’t ask.

Guest rooms are as calming as the resort’s casinos and public areas are electrifying. Swathed in shades of gold and grey, they offer direct views of sunrise on the Thames River. (Yes, get up for it).

Comforters, nearly as voluminous as the pillow top beds, invite a sleep so deep, I was out for eight hours straight. It was the longest I slept in months. That might have had something to do with the small Dream Catcher, my “Welcome Gift, ” waiting for me on the bed. Or perhaps it was a spritz from the tiny bottle of lavender spray, placed on my pillow at turndown.

The top of the line 3,700 sq. ft. Royal Suite features 180-degree views of the Thames River from its massive living room, where once, competing women dished on an episode of The Bachelorette. With two bedrooms, two baths, and beautifully appointed, this is where headliners or high rollers are generally put up. (Price on request).

Aspire guests have access to complimentary food and beverages at “Thirty Three” –private dining, bar, and Blackjack table rooms on the 33rd floor – all with a beautiful view of the Thames River.

Top shelf liquor, cocktails, beer, and wine are yours for the asking (my preference was a Jordan Cabernet, and the pour is BIG) at the private Aspire bar.

Dishes for breakfast, lunch, and dinner are set out as a buffet throughout the day, making it possible to dine for free during your stay. In the morning, you can have ready-made eggs your way, lox and bagels, bacon and sausage – and more. Lunch might be salads, sandwiches, and sliders. When I stayed, dinner consisted of steak, fried jumbo shrimp, lamb taco’s, and salad. This is not your roadside hotel evening pasta and pizza.

At 3pm, the private 4-table Blackjack room within view of the bar opens up for Aspire guests who prefer to play in peace and quiet. Minimum, $200, open 3-11 weekdays, 3-2 a.m. Fri. and Sat. Under 21 allowed in the room until 1pm only.

Aspire rooms start at $309 – $600 depending on what is going on in the complex and can climb exponentially during tough-ticket events (e.g. Bruce Springsteen). Suites are priced on request.

11 Things to Know about Mohegan Sun

and attracts 9 to 12 million visitors a year. Even an “off-season” midweek day will see 10k – 15k guests. There are 7,000 employees – many of whom have Native American heritage (though not necessarily Mohegan).

with symbols of the Mohegan Tribe throughout the property. Tens of millions of colorful beads were used to create vibrantly colored lighting and sail-like sculptures above. White birch bark around the Sky Tower ceiling represents the importance of basket weaving to the Eastern Woodland Indians. Everything – from trees to waterfalls, and even the color-rotating Chihuly glass sculpture – evokes Tribal imagery.

include those owned by Todd English (Tuscany), Bobby Flay (Bar American and Bobby’s Burger Palace), Michael Jordan (MJ’s Steakhouse), a Pepe’s Pizza outpost (since 1925 in New Haven CT) and the Soup Man (made famous by Jerry Seinfeld in his “Soup Nazi” episode). Unfortunately for those watching their figures, there’s also a Ben & Jerry’s, a Krispy Kreme, and a Dylan’s Candy Bar shop.

Michael Jordan, playing with the Wizards against the Celtics,

It has its own WNBA Woman’s Basketball and Professional Men’s Lacrosse Teams. The NLL (Lacrosse) matches are wildly popular, drawing 6,000 people to the area per event.

Bruce Springsteen, JZ, Beyonce, and Brittany Spears have all played in the 10,000-seat Mohegan Sun Arena

which hosts top-flight celebrities – most recently Dancing With the Stars.

Yes, folks – you pay nada to listen to any band booked there. Though most are not well known (yet), Eddie Money, MC Hammer, the Gin Blossoms, and more have played at the Wolf Den. Even if you can’t get a seat, the venue is somewhat open to the casino area, so you can just stand, watch, and enjoy.

The Earth Expo Center, opened in May 2018, is the size of 4 football fields

Column-free, painted bright white, and flooded with natural light, the space is attracting large-scale expositions – Boat Shows, Home and Garden Shows, etc. One of the biggest events – the 4-day Sun, Wine, and Food Festival – has brightened up the dark frigid days of late January for 17 years in a row.

occupies more than 16,000 sq. feet, has 13 treatment rooms, and offers everything from facials to massages to sloughing exfoliations and wraps.

as are the Kid’s Quest supervised activity center for children 6 weeks to 12 years ($12.25 per child/hour), and Cyber Quest Arcade for unaccompanied kids over 12. When I visited on a recent January Tuesday, there were more families with their young offspring here than people sitting at the slots – ironic for a gambling resort.

That’s because you can walk clear around the resort and not even enter one of three Casino Areas (Casino of the Earth, Casino of the Sky, Casino of the Wind) that together measure 300,000 sq ft. Those adverse to gambling will find joy just lingering by the central mosaic fountain pool in the hotel lobby or strolling around the interconnecting sections of the resort to ogle the tantalizing interior design and artwork. 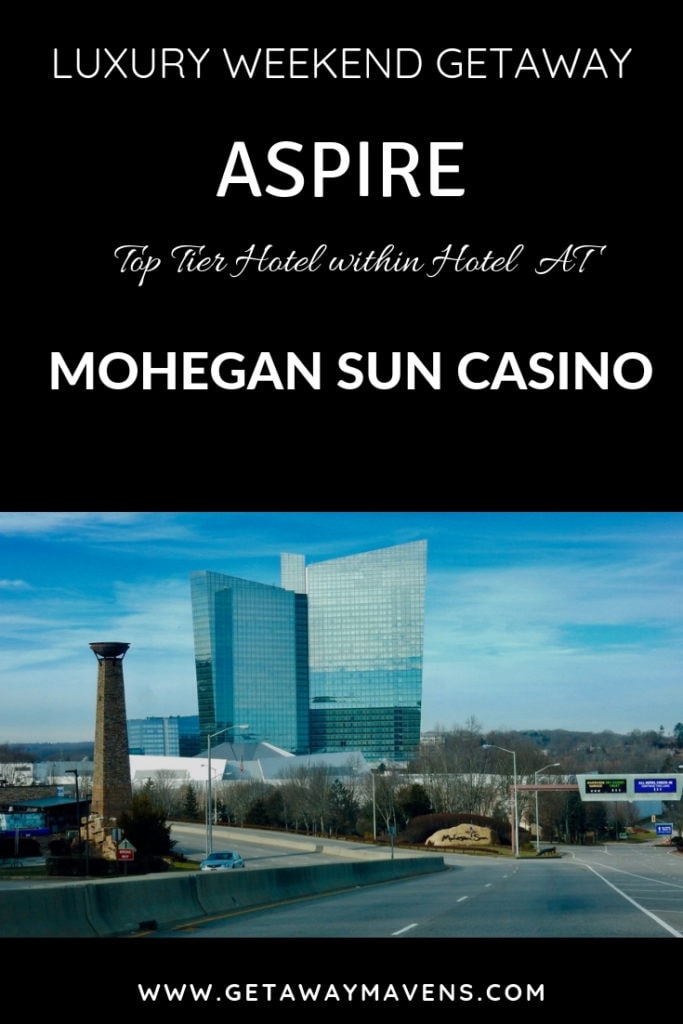