Home » Northeast » New Jersey » Princeton NJ: You Don’t Have to Be An Einstein To Love It

WHY GO: German-born Albert Einstein settled in Princeton NJ in 1933 with a $5000 Nazi bounty on his head. But Einstein lived safe and sound and very modestly in this preppy, Ivy League town until his death at age 75 in 1955.

He was far from the only world-renowned figure who lived in Princeton, though. And an engaging walking tour of both the town of Princeton and Princeton U. campus brings you in close contact with a roster of scientific pioneers, ingenious tycoons, “Celebrity Academics” and other brainiacs of the highest order.

On this IQ-boosting Getaway, discover one of the world’s best sculpture gardens, family owned shops and farms worth patronizing, some incredible US history and naturally, the best places to eat and stay in Princeton NJ.

The Getaway Mavens included Princeton on our “12 Romantic New Jersey Getaways” roundup here. Check it out for more to do in the Garden State.

Best Things To Do In Princeton NJ 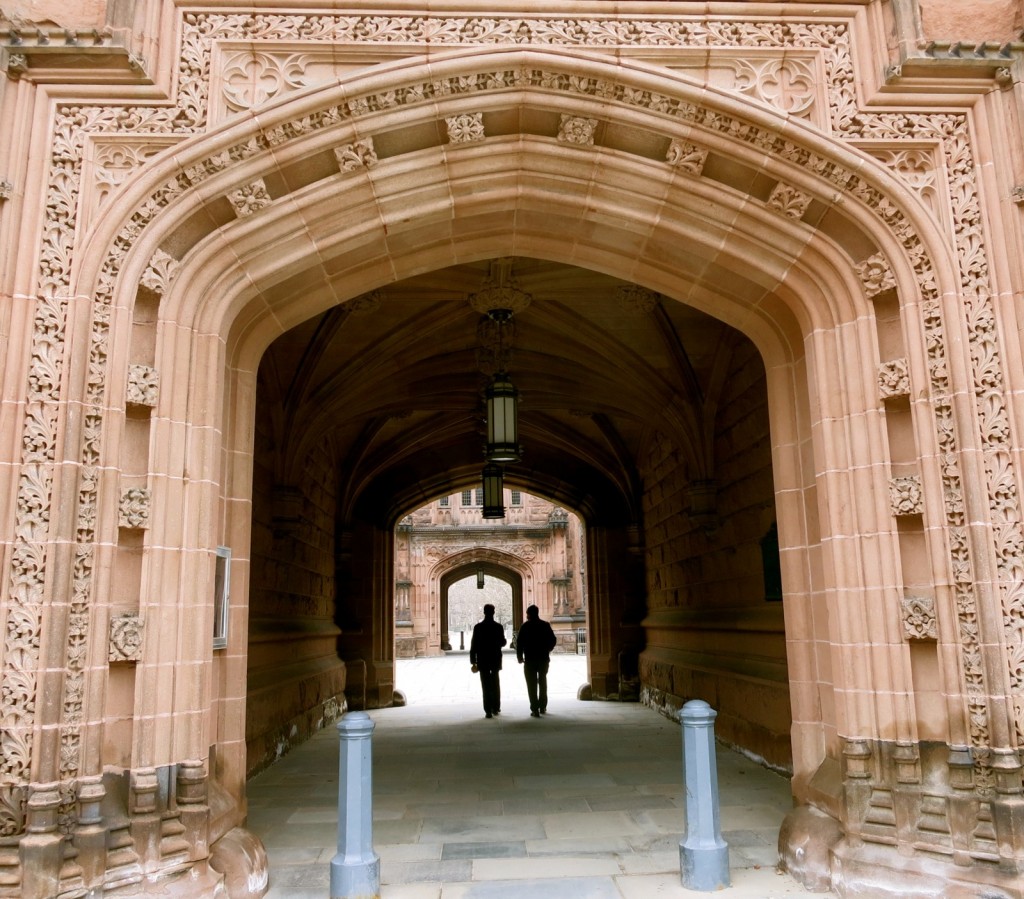 Take a 2-hour  “Shameless Namedropping” tour of this tycoon and “Academic Celebrity” studded Ivy League town. Walk along mansion-lined streets and through the Princeton University campus.

This informative, educational and sometimes outrageous tour will give you a fantastic insider understanding of both the Town and Gown sides of Princeton NJ.

Until his death in 2015,  “A Beautiful Mind” John Nash, remained on the Princeton U. Faculty. Author Joyce Carol Oates still teaches there.

In the early 1900’s, Princeton President Woodrow Wilson oversaw an expansion of the University, endowing the campus with the gothic look of England’s Oxford and Cambridge.

You might recognize it from several hit movies. A Beautiful Mind, Scent of A Woman, and Admissions were all set here. $27 per person, Saturdays 1pm-3pm. You can also arrange for a private personal or group tour.

The vision of Seward Johnson, a prolific, extraordinary, and eccentric contemporary artist, Grounds for Sculpture (GFS) can command the better part of your day. Stumble upon 270 outdoor works, some hidden “like Easter Eggs” in little secret gardens on 42 acres.

GFS, now populated by peacocks, statues, and ornaments of all kinds, was founded in 1992 as a non-profit outdoor museum. Wander on wisteria and birch tree lined “allees.” Discover a provocative Kiki Smith bronze of a girl squatting and peeing (untitled) and Johnson’s favorite installation – a life-size “self-portrait” of himself as Monet painting a Victorian-era lakeside gathering. All art is framed by nature. 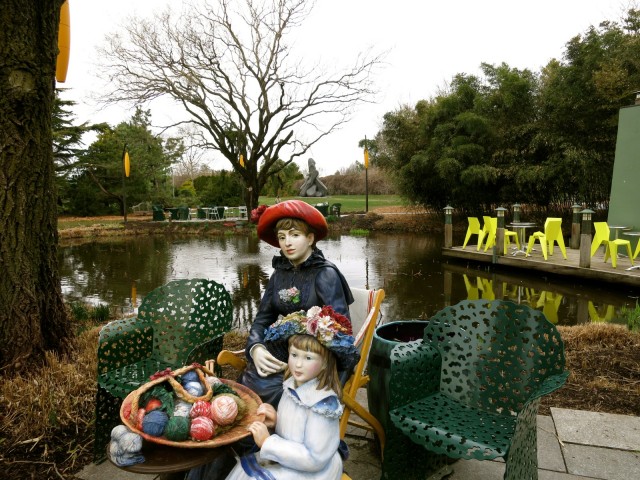 Now with a new Visitor Center featuring several galleries big enough to park a 747, a new Orientation Screening Room, a 9-11 memorial,  and major gift shop, GFS is destined to be a global destination. $18 adults, $15 senior/military, $10 students, under 5 years old free. If you live nearby, the $85 per person annual membership allows you unlimited free admission, invitations to gallery openings, and lots of other programs. It’s the deal of the century.

Gary Mount, his wife Pam and their daughter, Tannwen own this 35 crop 200 acre farm, “five miles from downtown Princeton NJ and in another world.”

Sip on mulled wine in winter, Sangria in summer in the Tasting room. You can “pick-your-own” anything in season, including first up in the Spring; asparagus! It’s sure to be cheaper and fresher than what you’ll find in any grocery store.  Store open 9-5 weekdays, till 6 on weekends. Wine Tasting Fri-Sun Noon-5.

Richard Stockton – a signer of the Declaration of Independence – and his wife, Annis, raised six children in this house which subsequently served as the New Jersey Governor’s Mansion. An entertaining 45 minute tour will introduce you, through stunning portraits and juicy gossip, to all prominent Stockton’s and their mates.

Women’s History fans will thrill to learn about Annis Boudinot, one of America’s first female poets and early advocate for women’s rights, who believed that women were the moral backbone of the fledgling country.

One Stockton daughter married Surgeon-General, Benjamin Rush.  A son, nicknamed “The Duke,” was educated at the Princeton Grammar School and attended the College of New Jersey.

Grandson Robert Field Stockton fought in the Battle of Fort McHenry (of Star Spangled Banner fame), rose to the rank of Commodore, was namesake of a California town, and designed a cannon that exploded accidentally, killing the Secretary of State, the Secretary of the Navy and President Tyler’s future father-in-law.

After NJ Governor Walter Edge purchased Morven from Helen Hamilton Stockton, he transferred Morven to the state for $1. It served as the official Governor’s Mansion until 1982.

Morven went through an extensive restoration and archaeological investigation, and re-opened as a museum and garden in 2004. The Stockton Education Center is a state-of-the-art building that expands its range of programming and events, located steps away from the historic mansion. Open Wed-Sun 10-4.

The Princeton University Museum covers five thousand years of art and all the world’s cultures on two large floors. But it is surprisingly intimate and beautifully curated, with juxtapositions both experimental and provocative.

Though phenomenal large-scale work is found on the first floor, downstairs, the Medieval Church Exhibit is arguably the museum’s most captivating. Stained glass windows, Gothic mantelpieces, sculptures from France, Spain and England – it’s no doubt spine-tingling during acapella and Chamber Music concerts held on occasion in this space.

Amble through a display of Japanese “Wit and Humor,” Roman mosaics, Grecian urns, Chinese porcelain, and Egyptian artifacts – brought back by students in the Princeton Department of Archeology who have been digging up Cyprus for the past 35 years. Free, Tues, Wed, Fri. Sat. 10-5, Thurs 10-10, Sun 1-5.

Updike Farmstead is one of two Princeton Historical Society’s sites. This one, a Wyeth-painting writ large, is surrounded by farmland. (The Historical Society also maintains the Bainbridge House in town where you can see 65 pieces of Einstein’s furniture and other historical artifacts.)

The land is so idyllic, it draws the likes of the Bacon Brothers and Marshal Tucker Band to perform in an annual June fundraiser. The home serves as an art gallery. And crops grown in a small community garden supply area restaurants, with proceeds going to those in need. Open Wed-Sun 12-4, Thurs until 7pm, $4.

According to the former Executive Director of the Princeton Battlefield Society, Kip Cherry, this was the first of General George Washington’s victories against the British Army  –  “the finest army on the planet.” It changed the minds of French officers who were initially hesitant to help an unprepared ragtag American militia. 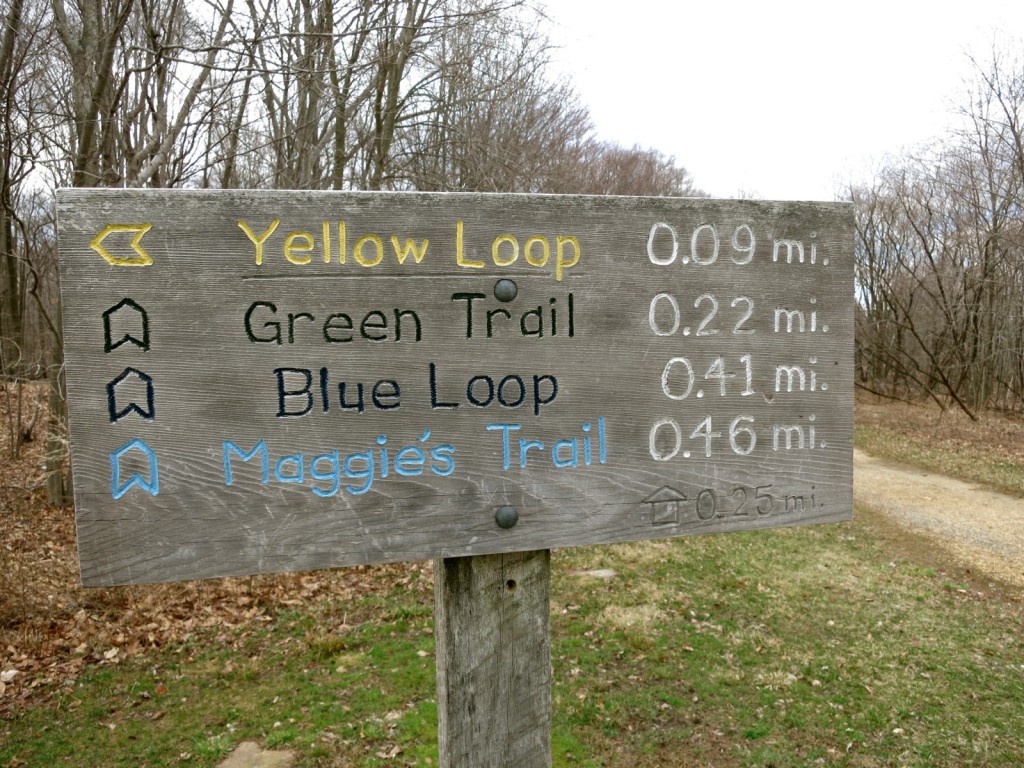 On a thousand acres with a large lake at its center, the Plainsboro Preserve represents Open Space at it finest.  Lots of wildlife – deer, eagles, fox, beavers with an active lodge- titter and twitter around five miles of field and woodland trails.

It’s a great representation of Central New Jersey wildlife. Go inside the Visitors Center to coo at Ringo – a full-grown Starling who was found as a featherless infant and is wholly imprinted on humans. A wonderful gift shop stocks a range of bird feeders, feed, local honey and NJ-made crafts. Free, 7am-7pm.  Visitor’s Center (with great gift shop) Tues-Sat. 9-5, Sun 12-5. 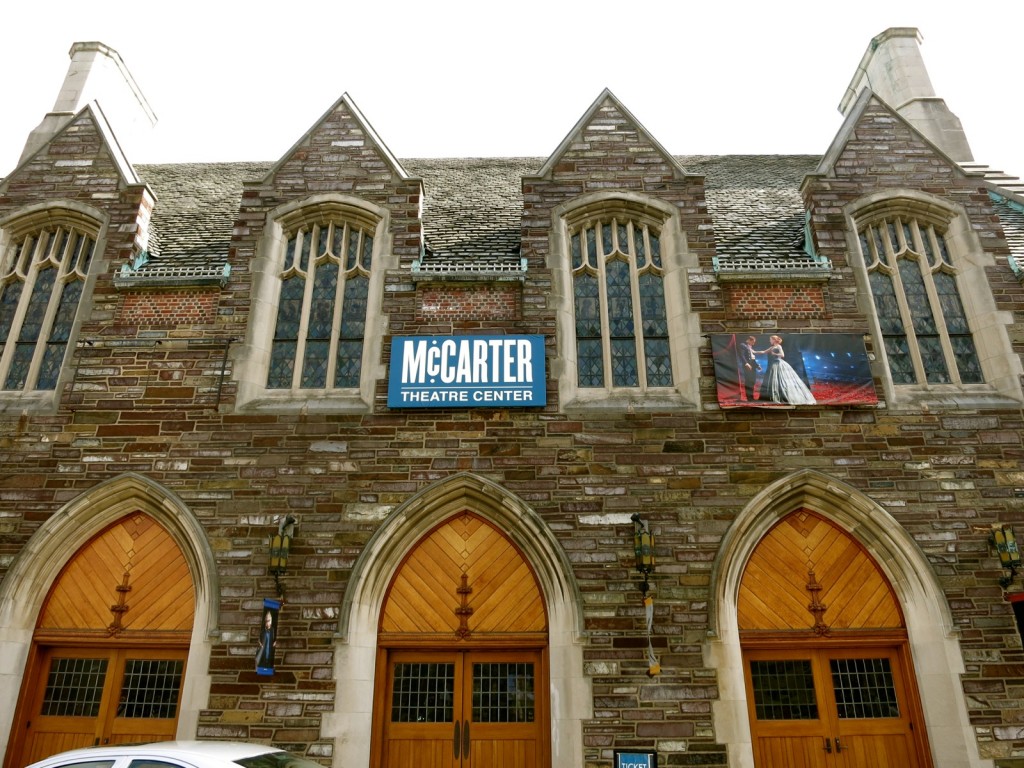 McCarter Theater opened in 1930 as the home of the Princeton U. Triangle Club (a la Harvard Hasty Pudding). The two-time Tony Award winning McCarter Theater has a relationship with the University but is not part of it.

Before heading to Broadway, Thornton Wilder’s Our Town had its try-outs here in 1938. And from 1963-1971, John Lithgow’s father was Artistic Director. The theater won a Tony for Best Outstanding Regional Theater in 1994 and Best Play (Vanya and Sonia And Masha and Spike) in 2013. Check out the calendar to see what’s on the boards when you’re in town.

Prior to the retirement of brothers Henry and Robert Landau, you could walk through this third-generation family owned clothing store, opened in 1955 – the year that Albert Einstein died – to find a wall of photos and letters to and from Einstein. It hid in a small corner between the Fisherman Knit Sweaters and Loden Coats.

Among them was a copy of Einstein’s 1939 letter to FDR, impelling him to develop nuclear weapons before the Germans did. There was also a 1952 letter from Israel Prime Minister Ben Gurion, requesting that Einstein accept the Presidency of Israel.

In 1994, when the movie IQ (starring Walter Matthau) was filming, townspeople brought letters, and other Einstein memorabilia, as props for Landau’s front window. The collection proved so popular, the Landau brothers decided to create a permanent exhibition inside the store. The store has closed, but money is now being raised to create the Princeton Einstein Museum of Science (PEMS), the only museum outside of Europe dedicated to his legacy.

Best Places to Eat In and Around Princeton NJ 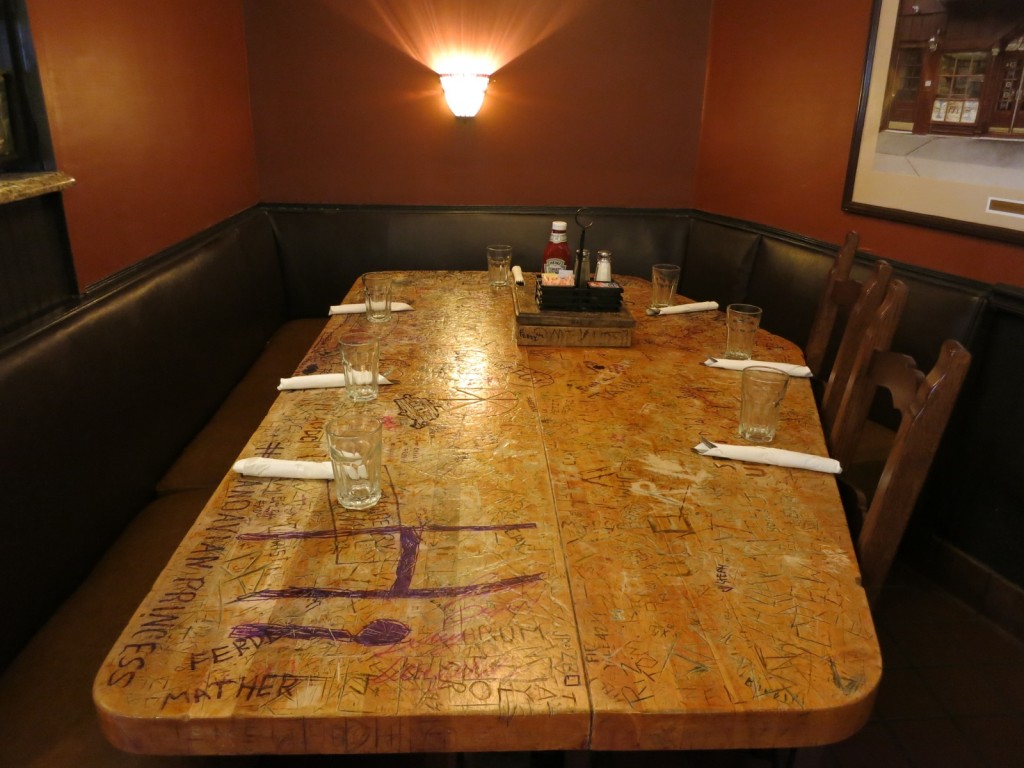 Nothing fancy but a local institution. Come for burgers or pancakes (“Breakfast All Day”) and eat on wood tables carved with the initials of Princeton students.

Chefs at Agricola glean produce from the restaurant’s 121-acre farm just six miles down the road. Chef/Owner Josh Thomsen treats each and every ingredient like a prize.

One year, the farm produced 500 lbs of Nappa Cabbage. What to do with that bounty? Ferment it and serve it as Kimchee!

Agricola is a veritable cornucopia when it comes to fermented and pickled veggies – put up in colorful jars that decorate one windowed wall. Order the appetizer highlighting the best of these spicy-sweet carrots, daikons, green beans and other “dirt candy,” in a perfect sweet and sour balance.

Although I swooned over the meaty “Mushrooms with Truffle Broth,” it might not be on the ever-changing seasonal menu.  Suffice it to say everything that comes out of the kitchen is not just fresh, but tenderly and expertly cooked.

EAT: Rat’s at Grounds for Sculpture

Yes, it sounds unappetizing. But Seward Johnson loved Wind in the Willows and had a wicked sense of humor when he named his on-site restaurant Rats.

Lakeside, garden sculptures, stunning landscaping, and  “Gypsy Wagon” entrance is just the half of it. The “modern take on country cuisine” includes repeat-guest favorites such as “Crispy Shrimp Salad,  addictive, hearty Short Ribs, and a Hot Chocolate Crème Brûlée. 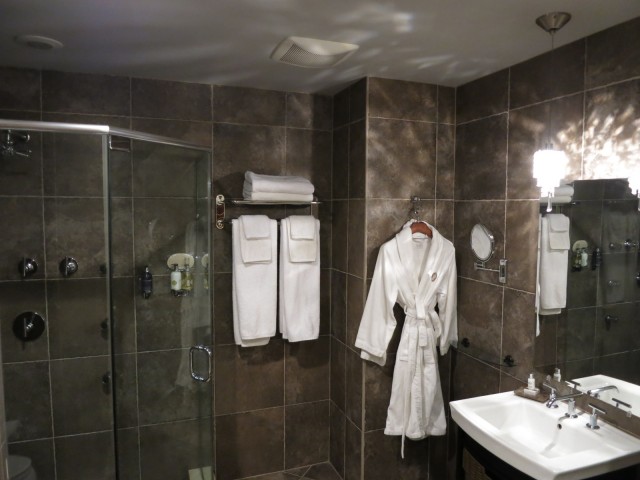 This 16-room Inn is the only boutique luxury lodging in Princeton. But its heritage is pretty awesome.

Albert Einstein stayed here. And F Scott Fitzgerald, Ernest Hemingway, and other notables were purported to have raised more than one glass in the basement, when the home was a speakeasy during Prohibition.

Rooms are on the small side, but Japanese-clean design and spa-retreat bathroom more than compensate. In some rooms the bathroom is almost as large as the bedroom itself. Continental breakfast skews healthy: fresh bagels, Kashi cereal, Chobani yogurt. Rooms and Suites $200-$610 depending on season include full Continental breakfast, wi-fi, parking.

Posing as a 1700’s town tavern in the center of town, this Princeton landmark actually extends over a block, with 188 nicely updated rooms and suites.

Bunking here has been a tradition for Princeton parents and grads since a few years after Jimmy Stewart graduated in ’32.

The Yankee Doodle Tap Room is perfect spot to drink with friends. Have a gape at the signed Princeton graduation pictures on the wall: Adlai Stevenson, Jimmy Stewart, Brook Shields, and Michelle Obama included. Rooms range from $200-$500 depending on season.