WHY GO: It’s amazing how many gardens you’ll discover in Philadelphia; some landscaped, others with nary a fern, plant, or even dirt. Yes, the word “Garden” can be interpreted in many ways, from shops to restaurants (no, not the one that starts with Olive) to eccentric creations.  This Weekend Getaway highlights some well known and lesser known aspects of this late-blooming city – with enough to keep you busy for at least a weekend.

This Philly Gardens post joins this roster of 18 Top Romantic Getaways in Pennsylvania. You might just get some more romantic getaway ideas. 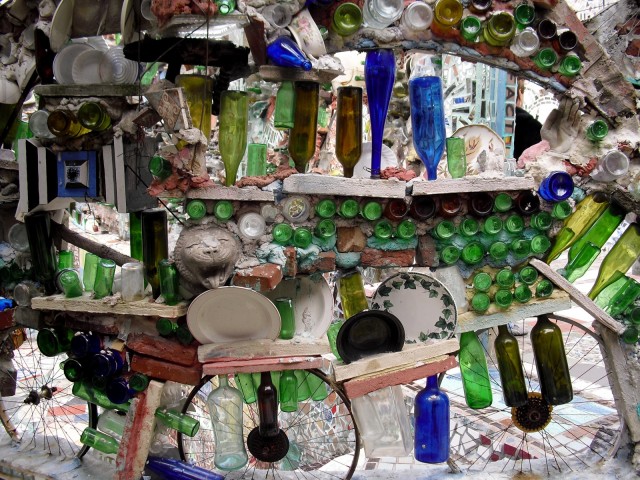 Where to Find Philadelphia Gardens

Wandering this “Visionary Art Space,” is like being trapped inside a kaleidoscope. Colors, mirrors, figures within figures initially emerged from a troubled mind.  Long story short, mosaic artist, Isaiah Zagar had a paralyzing mental breakdown.  His shrink advised him to concentrate on just one shard of glass at a time.

This led to Zagar’s manic ornamentation of several abandoned South Street lots. In 2004, when the lot’s owner wanted to sell and destroy all the artwork, Zagar raised $300,000 from his community and other art lovers to purchase the property outright. 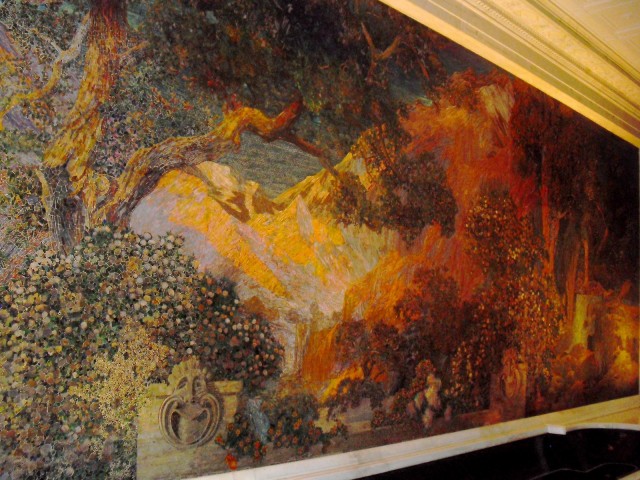 Washington Square in Philadelphia was once an American publishing hub. Both the Saturday Evening Post and Ladies Home Journal (among other magazines) were produced here. To showcase its prominence, Curtis Publishing commissioned the creation of one of the most eye-catching mosaic murals in the city. It’s still there.

Pop into the lobby to see “The Dream Garden,” a glittery full wall fantasia, created by Tiffany Studios in 1914, based on a Maxfield Parrish painting.  Around the corner, palm trees flank an indoor atrium courtyard where water plays and cascades over rounded steps of black and grey marble. Free, open during work hours. 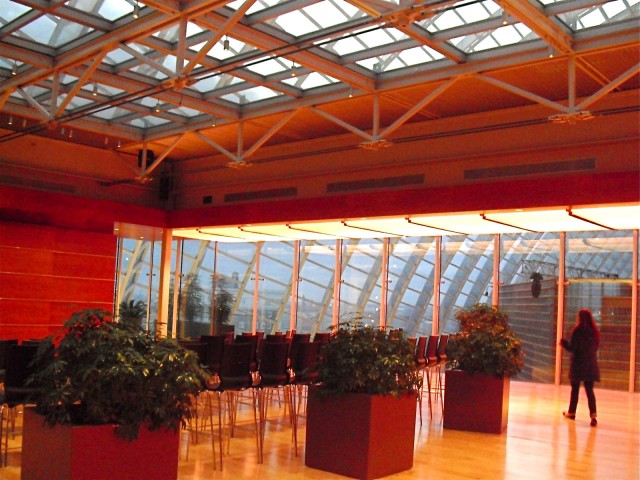 The Kimmel Center has been referred to as The Lincoln Center of Philadelphia, though at Lincoln Center there is nothing comparable to the Hamilton Garden – an enclosed deck with dizzying views of the arched glass roof above and lobby below. Way below.

If you suffer from vertigo, forget about stepping out on a balcony that suspends you within this massive contemporary Quonset hut of a building. You can take a free tour of the Kimmel Center at 1pm daily, or just head up the elevator to the Hamilton Garden to check it out.  Free. Open to the public except when closed for private events. 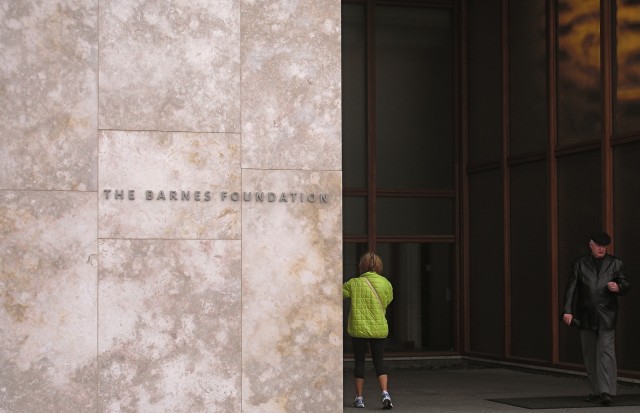 The Barnes was surrounded by controversy when it moved from a Philly suburb to the city in 2012. Dr. Albert C. Barnes who, prior to antibiotics, developed a compound that prevented eye infections and blindness in newborns, used his newfound wealth to buy pieces directly from Cezanne, Renoir, Rousseau, and other notable impressionists beginning in 1912.

By 1922, he had amassed enough art to commission a gallery and residence in Merion, PA. And there the Barnes Foundation remained until it moved to its new Philadelphia home in 2012. In his will, Barnes insisted that his collection stay intact in Merion. However, Board Members, wishing to locate the museum where more people could see it, interpreted Barnes’ wishes to mean that the collection be preserved exactly as it was displayed in the Marion mansion.

So, here’s the odd thing. The exterior of the new building is uber modern, blocky and bold. But the interior galleries are old fashioned, with parquet floors, and walls cast in sepia.

The paintings are uniquely arranged in two dozen galleries. El Greco skulls hang next to Renoir picnic scenes. And wrought iron hinges and tools intermingle with Cezannes, Van Goghs and Modiglianis. A visit to the Barnes is truly a unique experience. Open Wed-Mon 11-5, $25. Tickets can be purchased online, onsite or by phone (215-278-7200). 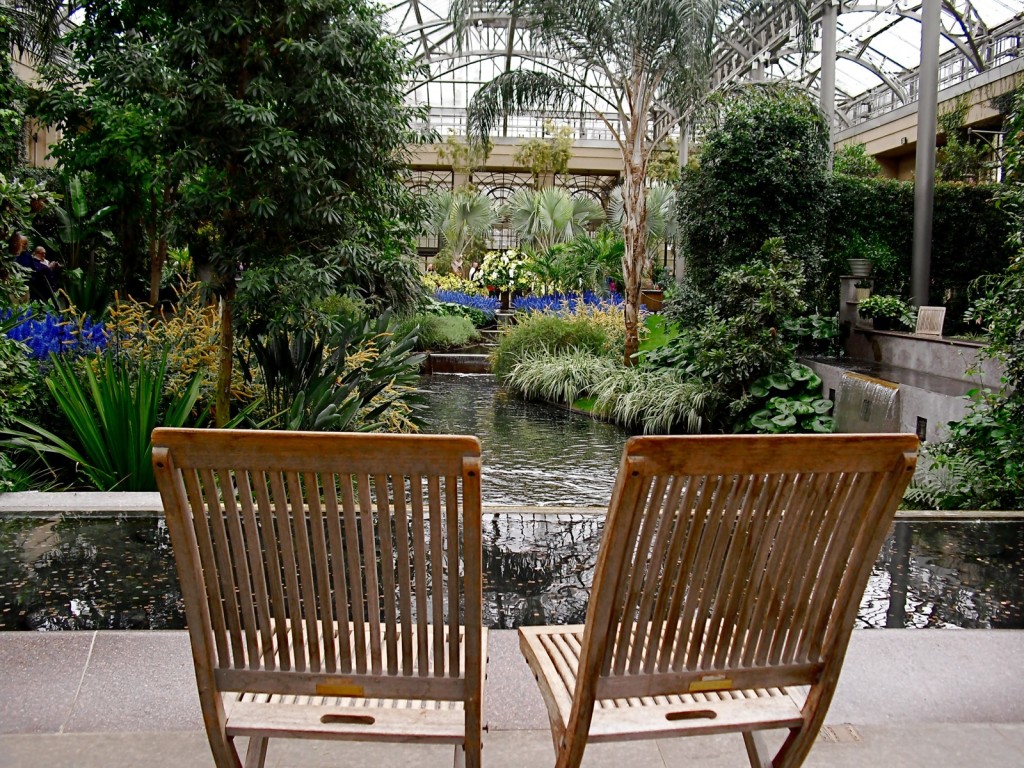 Longwood Gardens was covered in This Getaway Mavens Post about the Brandywine Valley. 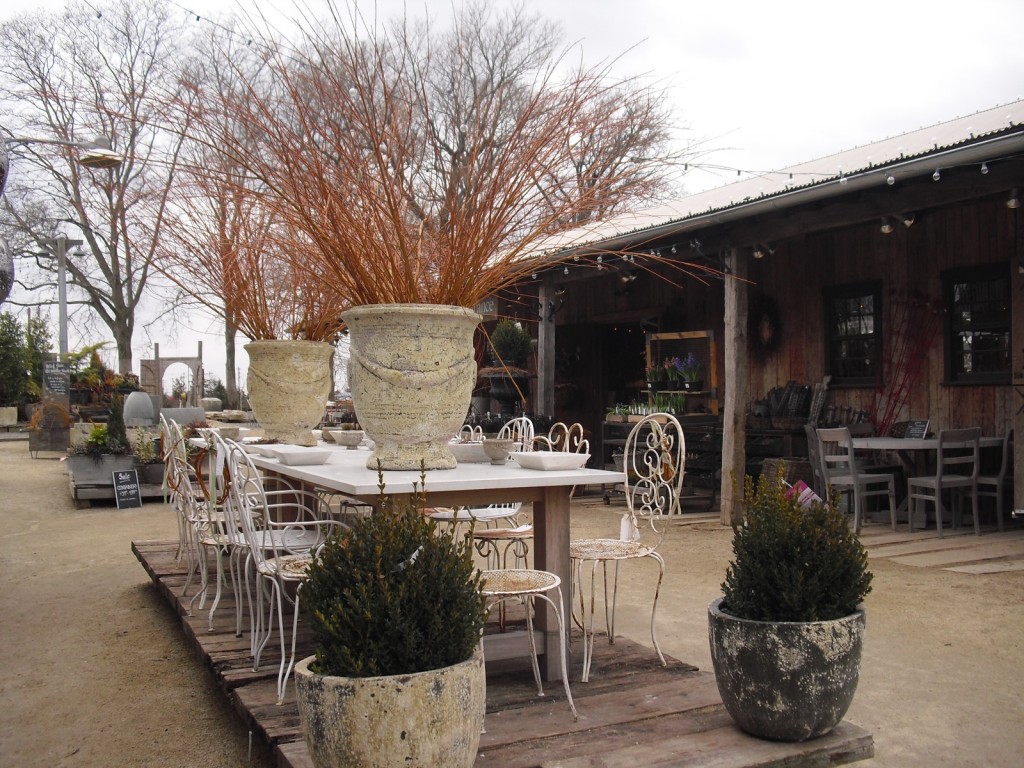 What happens when the company that owns Urban Outfitters and Anthropology goes into the gardening business? You get Potting-Shed Chic. This “curated collection” of décor for home and garden on eleven acres is a destination unto itself. Even if you have no desire to purchase that $12 glass jar of Black Sea Salt or a heathery Meadow Wreath ($78). Garden sheds, barns and greenhouses spill one into another. Displays are clever, fun and play with your senses. 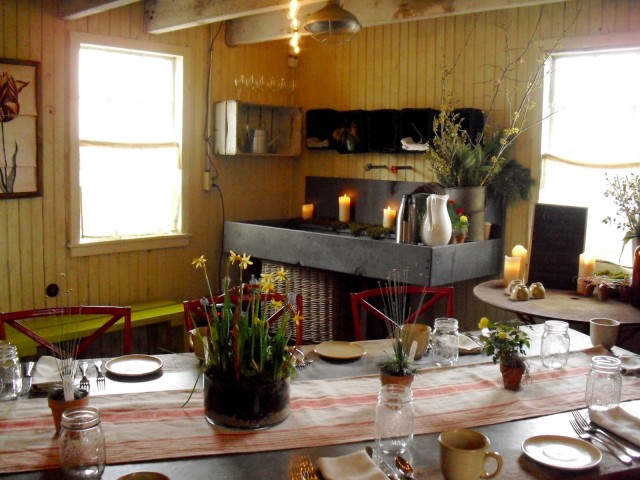 Should you wish to arrange a private party, you’ll be directed to The Mushroom Hut – a former, um, mushroom growing hut on the National Historic Register. It’s decorated as a prairie farmhouse, and is rustic like Ralph Lauren’s place.

Alternately, dine in a former greenhouse on site: Styer’s Garden Café at Terrain. Farm to table dining can’t get much closer to the food than this place.  You’re in Mushroom Country, so Local Mushroom Soup with Truffle Oil ($8) is an easy choice. Wild Field Green Salad With Shaved Root Veggies ($12) comes from the wild fields outside. And delights like Braised Lamb Rib with Raw Kale and Brussels Sprouts ($21) are indicative of Styer’s adherence to good, slow food. 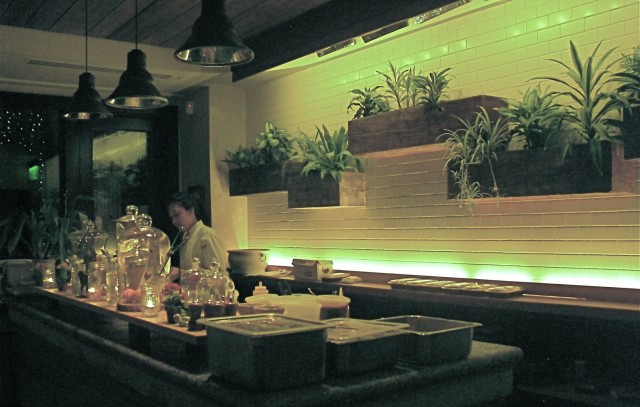 Enter through an outdoor patio bejeweled with pin lights into a Farmhouse-chic set of low-lit rooms.  The space is all mason-jar votives, pickle barrel shelves, and distressed wood floors. What most people don’t know, though, is that most of this stuff was salvaged from the set of M Night Shyamalan’s The Village.

There are lots of things left over after demolishing the set,” says Talula’s owner, and self-admitted “Culinary Director,” Amiee Olexy. “The movie was made nearby in Chester County. So we took a few things.” Tables fashioned from floor joists and vintage window wall sconces form a Comfort Food montage. But of course what brings customers back is the incredible food. 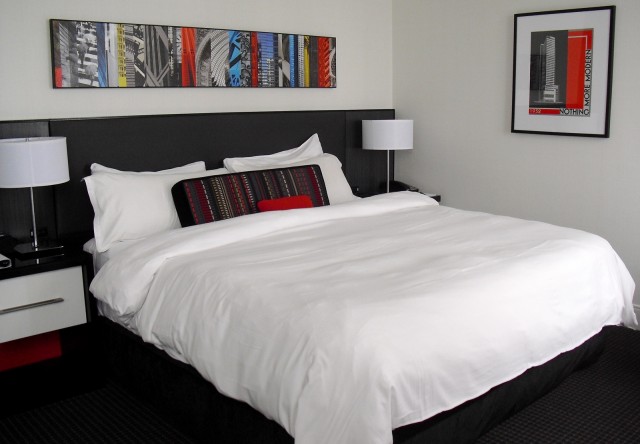 Where to Stay in Philadelphia

In 1932, when fussy architectural ornamentation prevailed, what is now the Loews Hotel rose as the first “International Style” Modern Skyscraper in the United States. William Lescaze and George Howe designed the Philadelphia Savings Fund Society’s 36-story 491 ft. tower in a T-Shape to allow for maximum light.

Loews opened the building as a hotel in 2000, renovating office space into light and airy rooms. The PSFS sign remains on the top of the building. And the bank’s original vault door remains in the stunning lobby.  Rooms reflect the modernist era; whites and grays with punches of color, trim furniture and great city views. Most rooms $159-$539 depending on day of week and season.

In private hands until the 1950’s this 1787 home fell into decay. Rescued and restored in the 1990’s, Morris House opened, in 2000, as a boutique hotel.  Fifteen exquisite rooms are dressed in period furniture. Stay overnight in this most American of cities in a place that best represents its origins. Rooms $149-$349 include free wi-fi, European Continental Breakfast, glass of wine between 4pm-5pm, afternoon tea and cookies.

2 thoughts on “Philadelphia PA; A Garden of Delights”