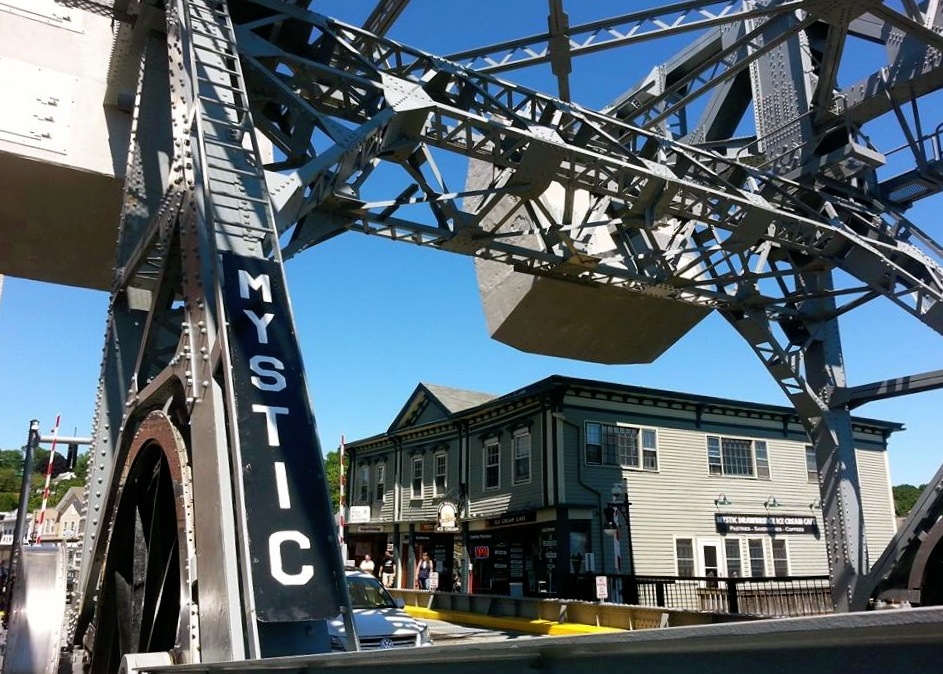 Last Updated on September 15, 2021 by Malerie Yolen-Cohen and Sandra Foyt

WHY GO: Of the 2,700 commercial whaling ships that plied the world’s seas in the 19th and early 20th centuries, only one remains: the Charles W. Morgan, and it happens to reside at Mystic Seaport in Mystic CT. 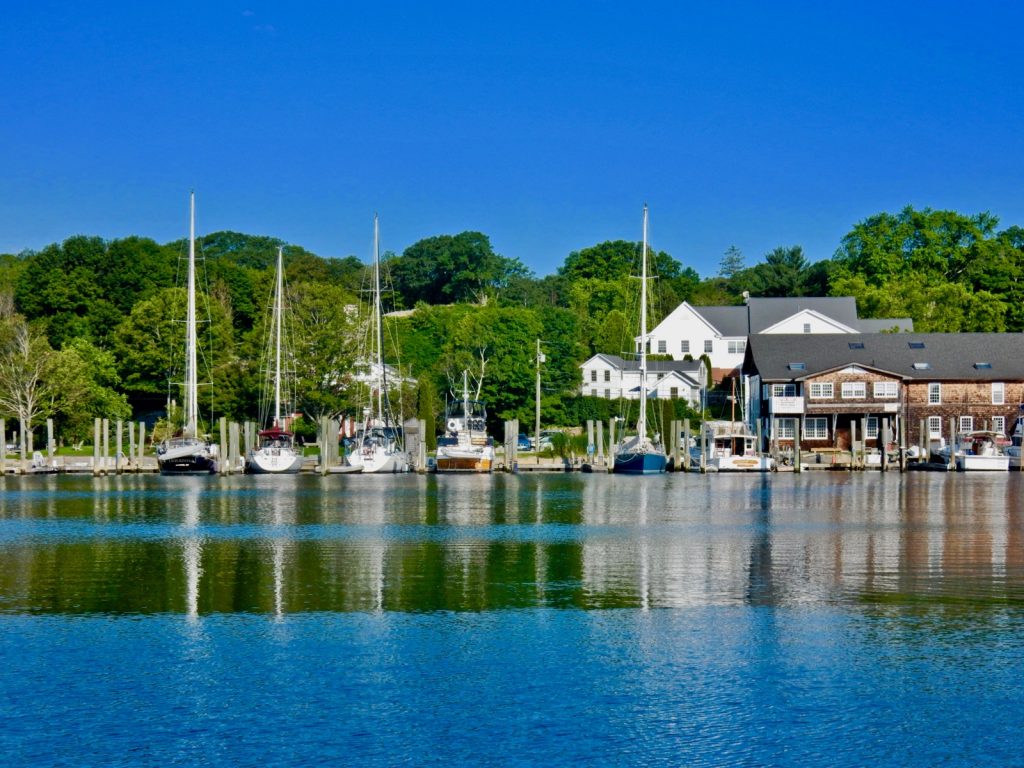 After being restored to sea-worthiness, the historic ship returned to the water in July, 2014 and after making its way around New England on its 38th voyage, is back to where she belongs. 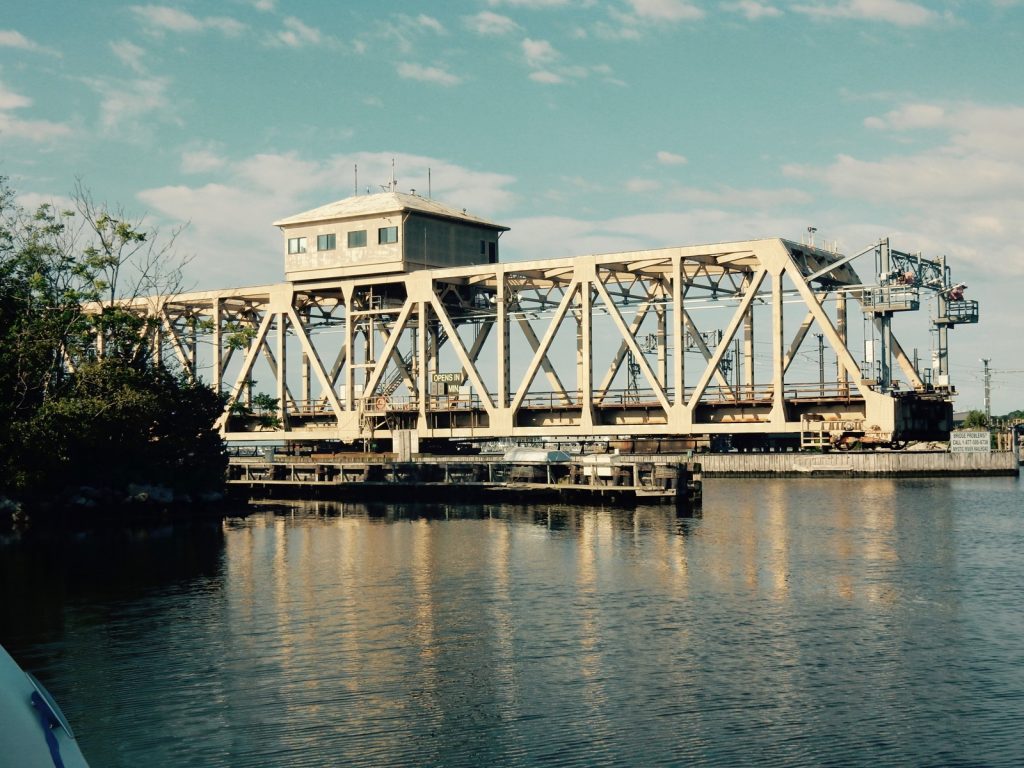 But seeing the Morgan is not the only reason to visit Connecticut’s most popular tourist town. You’ll find great dining, great bar/restaurants, beluga whales, historic bridges, and quaint inns in this Maven Favorite.

Things To Do In Mystic CT

This is probably the most touristy attraction to ever grace the Getaway Mavens website, which is supposed to offer ideas about how to AVOID crowds. But in this case, why beat a dead horse? Or, how can you beat a dead horse?  Or, what exactly IS a Dead Horse in the Seaport’s Dead Horse Ceremony? No, we’re not telling you here, but it is festive and fun and involves hoisting a canvas replica of a horse overboard to celebrate….something.

Stroll the 17 acres of Mystic Seaport, founded in 1929 – arguably the best-known attraction in Connecticut – and you might come across the engaging “Demonstration Squad” and Shanty singers who will do their best to drag you into their shticks.

Take a horse and carriage ride, amble around the boardwalks, bricks, cobblestones, and unpaved paths of Mystic CT, enjoy a beer at Spouter Tavern while listening to live jazz, or just watch costumed interpreters at work.  As for restoration of the Charles W Morgan, 250 tons of government-protected Live Oak salvaged from the destruction of Hurricane Katrina in Louisiana, along with White Oak and Yellow Pine were used to repair parts of the 113 ft. 165 year old whaling ship. It returned to the water with great fanfare in 2014.

The Thompson Exhibition Building, a huge futuristic boathouse-meets-space-shuttle-hangar, opened in 2015 at the North Entrance and hosts rotating exhibits in its soaring halls. The standout contemporary architecture is reason enough to stop inside, though you can purchase Seaport tickets here as well. $28.05 adult, $18.95 child, or $95 for family membership.  Open daily March 23-Oct. 27 9am-5pm. Check website for other times of year. 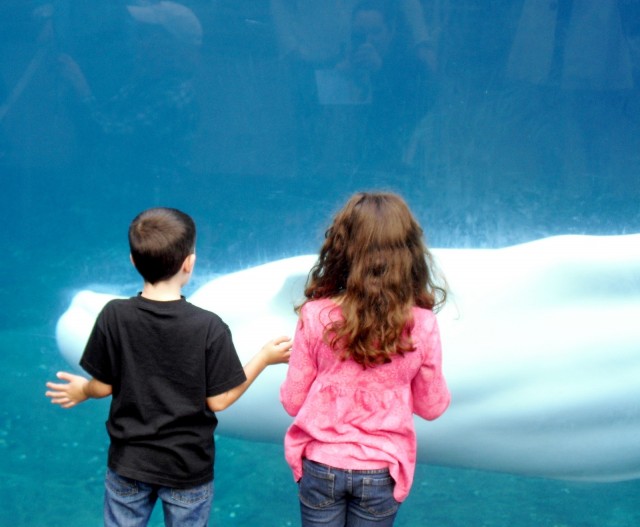 If you can’t resist the ghostly grace of rescued beluga whales, or the antics of African Penguins, stop in at the Mystic Aquarium, where you can spend a day communing with seals, penguins, jellyfish, and other sea creatures in this beautifully well-rounded attraction that is so much more than an “aquarium.” $29.95 adults, $21.95 kids, open April – November 9am-5pm. Check website for other times of year.

DO: Rent a Kayak at Riverdog Kayak

There’s nothing more serene than paddling up the Mystic – past the Seaport and into a salt-marsh rimmed basin. It’s about a 6 mile round trip excursion. $20 per hour. 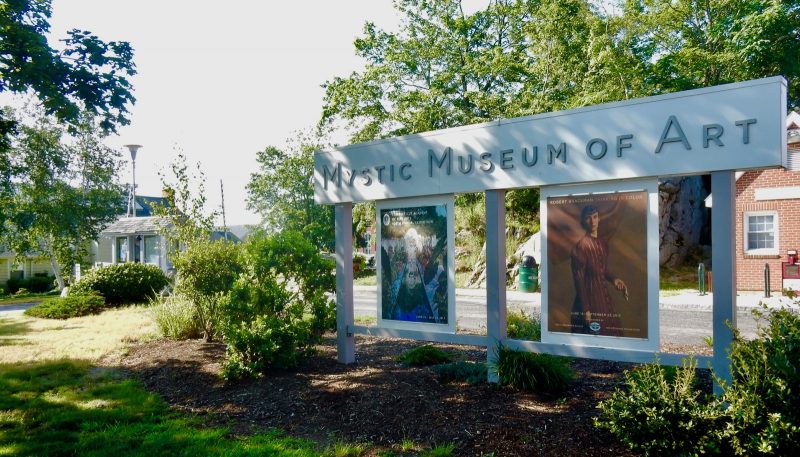 Small, but packs a punch. See permanent and temporary exhibits in 4 galleries. Open Daily, May-Dec. 11-5. See website for other times of year.

Any kid who spends lots of time on boats will at some point or another purchase a Mystic Knotwork Original Handmade Sailor Bracelet, which he or she will wear for years until it’s so gunky, it must be removed. At least that’s what happened in my family: after four years, and all that time part of my body, we had to finally part ways. But that’s not all that’s knotted in this 50 year old establishment. You’ll find placemats, key rings, jewelry, door mats, pet toys, and so much more.

Make sure to stroll over the bascule bridge, with its truck-sized cement counterweight poised overhead, then join the crowds meandering in and out of great galleries, boutiques, restaurants and the fantastic Drawbridge Ice Cream (see below). 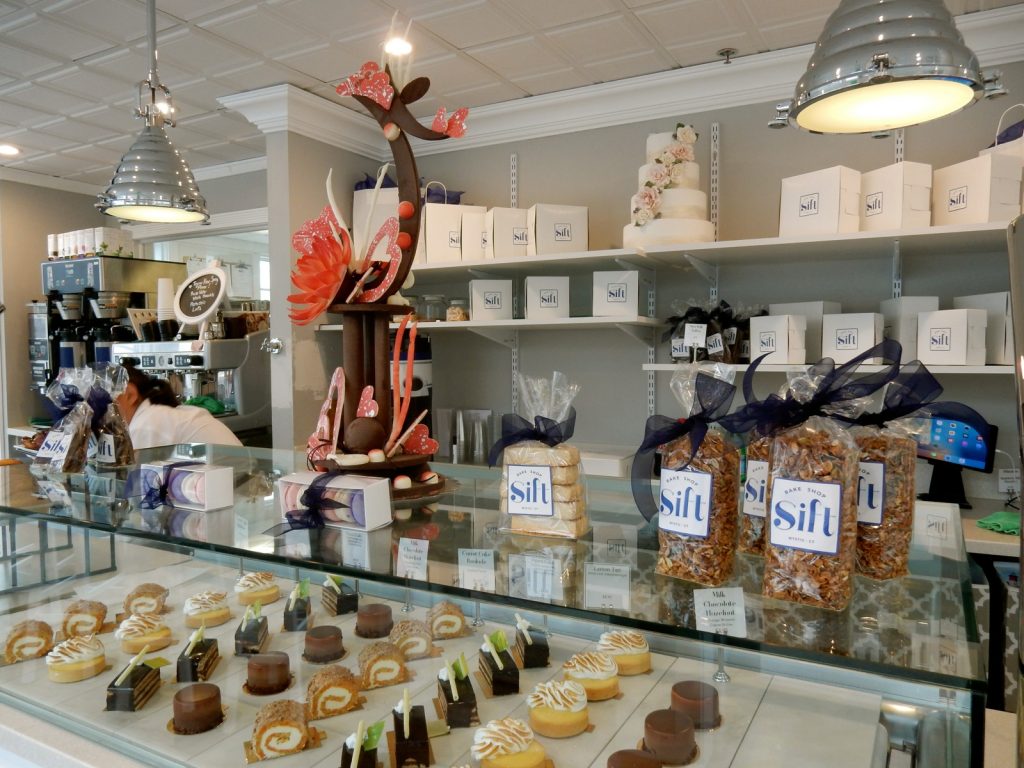 Forget Mystic Pizza, all visitors to this tourist town should head to the Mystic bakery, Sift. All I can say is Wow! You’ll hardly find another baked goods shop of this caliber outside of Paris. Owner/pastry chef par excellence, Adam Young, perfected the craft during his multi-year stint at the venerable revamped Ocean House Hotel in Watch Hill RI, and it is very apparent. Wow and wow again.

This new shop makes its own Organic Craft Chocolate in Small Batches from Bean-to-Bar. You’ll also find ice cream and other confections.

Best Restaurants In and Near Mystic CT 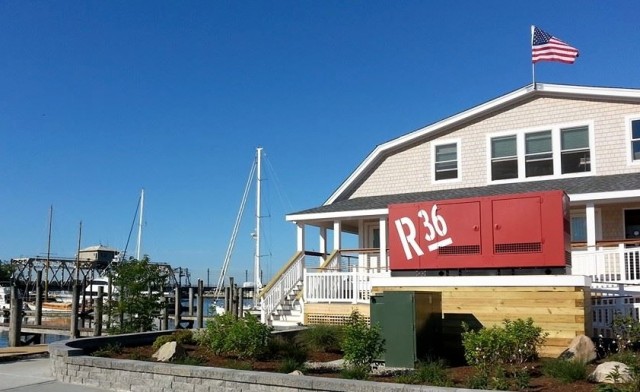 R-36 (owned by the Bravo-Bravo group and named for the red channel buoy), is sensationally set right on the Mystic river in the shadow of the rotating railroad bridge. A slew of bartenders hop to it both inside and out on the deck overlooking river action. Waitstaff make sure they get things right  and are eager to please, but not over-ingratiating.

Singular location and great service are but two aspects of a successful restaurant: The food has to be good as well. And Red 36 delivers. From 5-Spice Ahi Tuna Burger with wasabi cole slaw – the perfect combo of seared fish and spicy crunch, to Boneless Beef Short Ribs, chefs know how to get the best of contemporary cuisine out to tables in a very timely manner. Located in the Seaport Marine,  R36 is within a few steps of visiting and seasonal boaters and just a few blocks from the center of town.

Purportedly haunted restaurant and cellar tavern within a restored 1756 Sea Captain’s home, the Captain Daniel has been packing in old salts since 1983. If you’re looking for low-lit Colonial atmosphere and good food, this is your place. Ask to see a supply ledger dated June 1769 – the place seems to have been run on rum. And onions.

Mystic’s “Sea and Farm to Table” adds to the non-franchise, foodie bent of Connecticut’s most touristy town. Oysters come from beds a few miles offshore, and foliage that ends up on your plate is foraged nearby.  So far, reviews skew very positive, including mine. Though the menu changes daily (as befits a farm-to-table restaurant), you’ll find dishes like “Baked CT river shad with a rich potato puree, rhubarb- brown butter and wilted spinach” $28.

This new brewery and pub restaurant just opened a few days before 4th of July Weekend 2021. So, if you want to know how the beer, cider, wine and vittles are, wait awhile – or take a chance, visit, and try it out yourself. The Lobster Joystick ($18), like a corn dog but with lobster, sounds like a winner. Can’t decide between lobster and scallops? The Wasabi Scallop and Lobster Roll ($18) has both.

Yes, there’s plenty of pizza in Mystic, and if you want a plain pie on the go, Mystic Pizza (which is not actually where Julia Robert’s first big movie was filmed.  That was done in nearby Stonington, CT) is decent.  But if you’re looking for a sit-down brick oven gourmet pie , book a table at Pizzetta. The whole place is fun and colorful, and perfect when you just can’t stomach another fish dish.

Boaters love this riverside lobster spot. You’ll see them jockeying for a place to tie up on a smallish dock – or hovering just offshore. What’s the draw? Ford’s Lobster Bomb ($42): a 1/2 lb of fresh lobster meat, stuffed, like spinach dip, into a huge bread roll, and topped with melted butter. Of course, there are some less heart-afflicting items on offer as well, like salmon and salads.

EAT: Abbott’s Lobster In the Rough

Abbott’s is absolutely a tourist mecca. That’s because it’s been dishing out fresh steamed lobster at this riverfront location since 1947. A bit over 30 years ago, you could get a complete Lobster Meal (1 lb., corn, clams, coleslaw) for $9.95. Now, without the corn and clams (but including chips and coleslaw), a 1 1/4 pounder costs $25 or thereabouts, and prices go up as the lobsters get heftier. But they are still fresh and tasty, especially when eaten on a picnic table overlooking the boats on the river.

Cap off dinner with a perfectly cold and creamy home-churned scoop at Mystic Drawbridge Ice Cream. It’s the most delicious way to end the day, and the location at the groaning edge of the drawbridge can’t be beat. 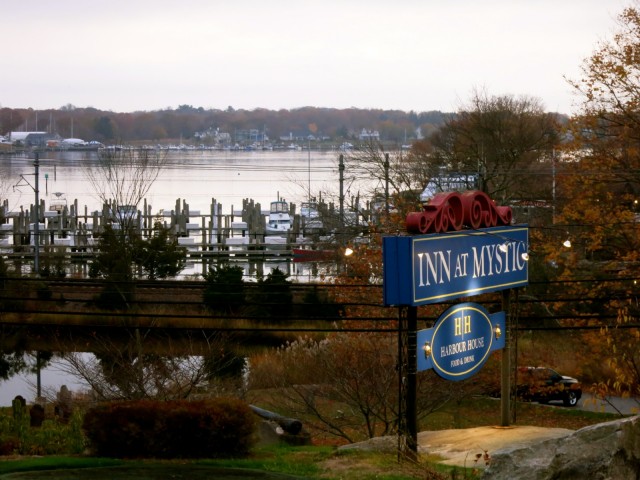 The Inn at Mystic has never been grand or stately, but for years, this sprawling motel-like series of guest rooms was THE place to stay in Mystic. But by the 1990’s it fell out of fashion, out of favor, with atmosphere that had seen better days. Now, emerging from a room by room renovation, this iconic property atop a hill overlooking the water is attracting attention once again.

You’ll find new crisp bedding, Robins Egg blue walls with elegant wainscoting, eye-catching local nautical photos, large flat-screen TV’s, bedside lamps complete with electrical outlets (a great improvement over behind the heavy bed or absent versions), new carpeting, and wood-burning fireplaces in select “all-amenity” rooms. Walk in on a cool autumn night, and you can smell the lingering odor of a just-burned fire. Rooms from $189-$350 per night include Continental Breakfast.

Stay in the shadow of the mechanical wheels and huge cement counterbalance weights of the fascinating Route 1 bascule bridge – book one of eleven upscale rooms at the spectacularly located Steamboat Inn, perched on the most exciting and constricted section of the Mystic River.  (In 2011, Kim Kardashian stayed at The Whaler’s Inn – Steamboat’s sister property across the bridge-which was consequently completely booked for months). $160-$325 varies by season.

6 thoughts on “Mystic, CT: Beyond Whaling”