Home » Hotels » MGM Springfield MA: Not A Gambler? No Problem 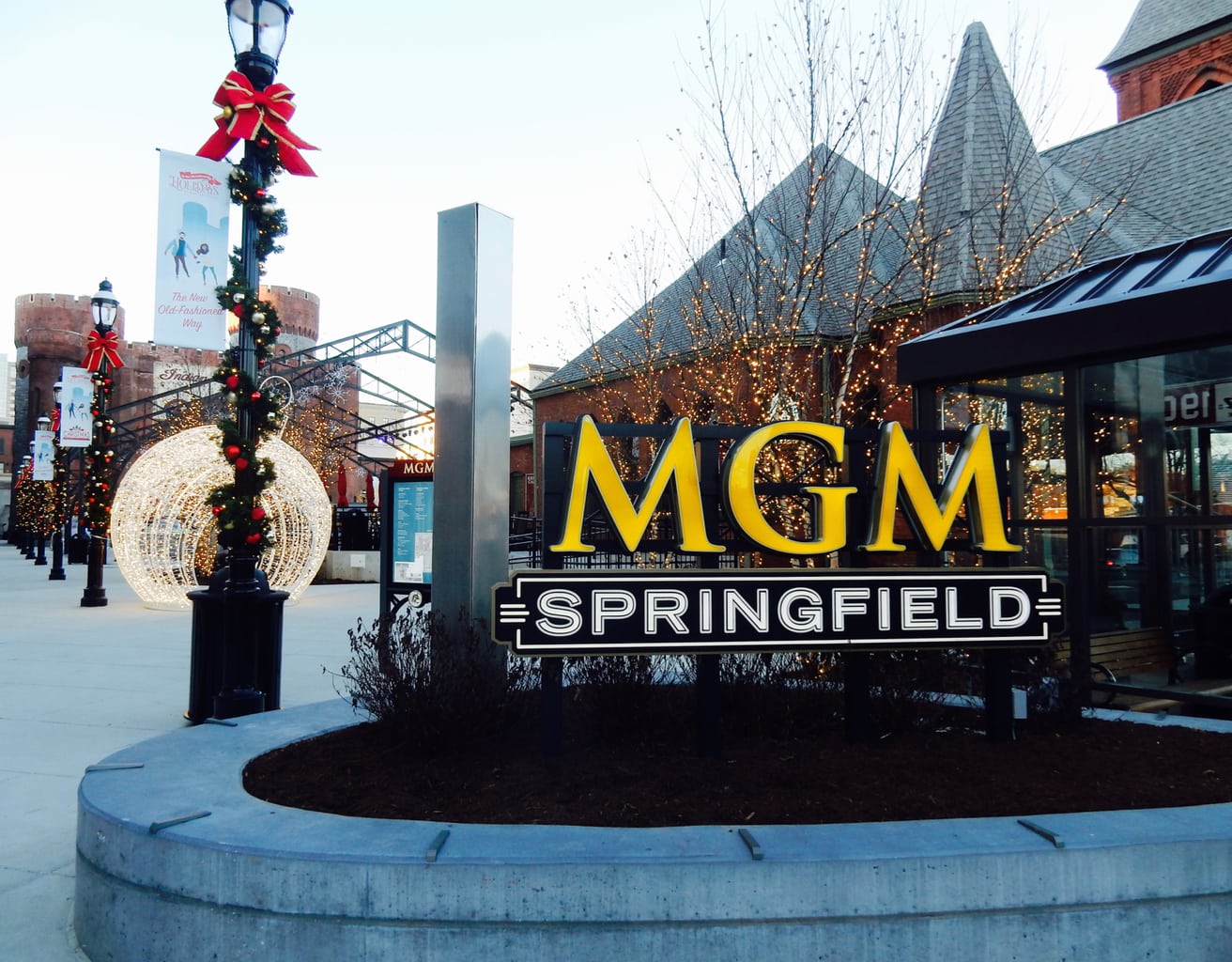 The Getaway Mavens are not gamblers. So, it’s really not like us to go gaga over a Casino where hoards of people stare banefully at bleeping, dinging, flashing slot machines – or at Blackjack and Poker tables – hoping for a payoff.

But here’s the thing: though ostensibly a gambling hall, MGM Springfield, the first MGM Resort in an already developed urban center, has brought life back to what was a down in the dumps municipality. Some even claim that the MGM, opened in August 2018, is setting off a renaissance in this Western MA city.

Through repurposing vacant buildings, creating an eye-catching entertainment Plaza, drawing headliners to the Mass Mutual Center (owned by the State of Massachusetts but now managed by MGM), opening fun restaurants and bars, offering the only full-service movie-theater in the area, and utilizing wit and nods to local legends in the construction of a very cool boutique hotel, MGM Springfield delivers a phenomenal “Staycation” beyond expectations, even for people who are adverse to betting.

According to one spokesperson, “MGM could have plopped a new marble and glass building in the middle of Springfield, but didn’t.” It enfolded the Victorian-Gothic French Congregational Church (now Kringle Candle Emporium), the old YWCA, the façade of the former Union House Hotel (now The Chandler Restaurant), and castle-cool Springfield Armory into its complex, honoring the past while creating something modern. Poignantly, the  “Barber Room” (in the salon) is named after the Mayor of Springfield’s father, Alfonso Sarno, a much loved Springfield barber for six decades.

Architects and designers went so far as to pay homage to what once stood on this site: fashioning en-suite dining room tables from trees chopped down on Bliss St. (now One MGM Way). It’s interesting to note that between the new and old buildings, there are 45 different window types alone. No wonder architecture hounds and new-hotel enthusiasts are starting to flock here.

In fact, touches all over the place will make you smile, and are worth second and third looks. If you do nothing else, wander the casino property and study the chandeliers. Each one is a work of art, embellished with quirky artifacts: golf clubs in the TopGolf Swing Suites, band hats in one of the larger guest suites, trapeze bands in Tap Sports Bar, antique photos in the Commonwealth Bar and more.

MGM Springfield takes up a good chunk of downtown, though its size is initially tough to discern. If driving in, choose the free Self Park garage (yes, I said free!), with elevators that deliver you right onto the Casino floor. You won’t be able to avoid the labyrinth of slot machines in vast, seemingly endless, rooms as you make your way to the Hotel, but just go with it and follow signs.

If dropped off, you’ll enter the hotel at the corner of Main and Howard Street, where you’re greeted by the first of many art installations – this one a whirlwind of white ribbony steel by Mia Pearlman, reflecting the tornado that tore through Springfield MA in 2011.

Unheard of and pretty ironic for a gaming resort, the MGM Springfield Hotel is a paean to giants in the literary world who once lived in the area (Merriam-Webster of Dictionary fame, Emily Dickinson, Dr. Seuss and more). And so, the hotel lobby is designed like a library, lined with bookshelves filled with real books (e.g. a 1962 Agawam High School Yearbook favored by guests who graduated that year and were excited to see it), and knickknacks gleaned from nearby Brimfield Flea Market, which gives guest rooms and common areas a whimsical vibe.

The large HOTEL sign once graced the façade of the Golden Gate Hotel in Las Vegas, alphabet letters behind the reception desk look like enlarged Scrabble tiles, and check out the elevator bank! It’s like walking into a giant shelf of favorite tomes.

Make yourself at home in this living room like space. According to some, it’s the best place on the property for funky-fun craft cocktails with names like Tequila Mockingbird, Gone With the Gin, and Fahrenheit 451 – the latter a Chartreuse based drink topped by fresh mint that is lit on fire.

On Friday nights from 6-8, the Lobby Bar becomes a “Study Hall” where guests get a “Library Card” which is stamped every time you try one of the many newfangled cocktails.

There are 252 rooms, including 16 suites, on five floors – each slightly different based on the “literary” art on the walls. Every floor showcases an artifact from the Springfield Museums in a glass case just off the elevator. As you make your way to your room pay attention to your surroundings: lines from Emily Dickinson poetry are woven into the hallway carpets; arrangements of sculptural lighting on hallway walls incorporate Dr. Seuss spectacles; US Mail signs outside each guest room door serve as Do Not Disturb or Service Requested lights.

The creativity of interior designers continues in the guest rooms, which are unlike any I’ve seen outside of a NYC boutique hotel. Steam-punk style reading lights loom over ultra-comfy fabric covered beds distinguished by slanted backboards that are ergonomically perfect for reading before sleep. Poured concrete ceilings, dark wainscoted walls splashed with bookish art, forest green cable knit throws, chairs upholstered in tweed and hound’s-tooth with a punch of bold floral pillows – it’s a masculine/feminine/Yin/Yang mash-up of a space that is at once giddily fun and seriously sumptuous.

The 16 suites, with ample room for entertaining and lots more features, are always the first to sell out. The Presidential Suite on the 6th floor is unmarked – making it a discreet romantic getaway for 2 or a party space for a group of friends.

A small but well-appointed fitness room on the 2nd floor is outfitted with machines, balls, weights, water and towels.

In season outdoor roof deck pool is available to guests only.

A full service Starbucks can be found right off the lobby.

Room and suite rates from $189 to over $1000 per night depend on availability and time of year.

Just outside the hotel lobby – you’ll find two shops: Essentials carries sundries, t-shirts and canned beer. Hannoush Jewelers, a local enterprise, captures the high rollers who might wish to spend their jackpots on something diamond studded. It was important to the Resort developers to support regional businesses, rather than, say, a national brand like Tiffany’s.

The MGM Hotel is obviously connected to the Casino, and once you step over the threshold from lobby to the gaming floor, you can’t avoid 2,550 slot machines in 125,000 sq. ft of space. A cordoned off Poker Room, designed with aesthetics based on the Rolls Royce Phantom (manufactured in Springfield MA in the 1920’s), is a hushed respite from the overstimulation of the rest of the place. Gamers can take advantage of free coffee, water, tea and Coca Cola products from automatic dispensers – and belly up to several bars – that line the outer perimeter of the casino.

I’d be remiss if I didn’t say something about the immaculate bathrooms in the casino area. Kudos to the employees who keep them sparkling clean. Each sink features a faucet, soap dispenser, AND an air hand dryer – something I’ve never seen before.

At all hours of the day, every day, people que up at the M Life Rewards counter to become a member of MGM’s Loyalty Program. Yes, it’s a business, and when you’re in the business of (mostly) taking other people’s money, it’s good PR to show you’re giving back in some way. In this case with points every time you load up your card for the slots, when you purchase food and drinks, or buy stuff in the resort’s shops.

To its credit, MGM Springfield features a very visible Game Sense office – available to people who might be confused by the games, need the odds spelled out, or require counseling for gambling addiction.

Drinking and Dining At MGM Springfield

I love a craft cocktail with an outrageous story – and the Commonwealth Bar does not disappoint. The “Indian Sidecar” costs $25,000…. but comes with a motorcycle. Yes, the Indian Motorcycle was first built and subsequently manufactured in Springfield MA, and has recently made a comeback (though no longer made here). This very expensive drink honors that heritage.

If you had a “good day,” or just want to dine in one of the finest restaurants in Springfield, book a linen covered table at The Chandler Steakhouse, a low lit establishment with all the accoutrements of a swanky steakhouse. Circular dining room with leather banquettes? Check. Fawning waiters? Check. Great wines by the glass? Check. (My Oregon sourced Erath Pinot Noir was lovely). Lamp shade votives? Yep. The bread course – an excellent pull-apart dense popover – came hot and fresh from the oven. Clubby appetizers, like Oysters Rockefeller ($18), Roasted Bone Marrow ($16) are good, steaks from $44-$58 are of course the featured meal, but even vegans can find something to eat (on the day I dined – it was a Cauliflower Steak for $24), and non-meat eaters can choose from several seafood and chicken dishes. My Caramelized Scallops over shaved Brussels Sprouts and cauliflower cream ($34) was peppery and tasty – a perfect counterpoint to that glass of Pinot.

At the other end of the casino floor, find Cal Mare Italian Restaurant – a pretty, open space with good pasta dishes, and a walk-up wood-fire pizza annex.

There are screens galore (60 in all) playing all manner of sporting events at Tap Sports Bar, and the food decent, pub grub (burgers, wings, smoked brisket chili, etc). But what makes this spot so alluring is the 10-lane bowling alley in the back: from the looks of it, a very popular spot for neighboring office workers during a winter weekday lunch break. I heard that all lanes are already booked weekends through the end of the year. Tap Sports Bar is known, of course, for it’s beer on “tap,” burgers and “super fun aps.”

Those who love the variety of choice in food halls and food courts will appreciate the South End Market Food Court. In addition to a coffee/gelato booth (I’ve been told the MGM Signature Hot Chocolate is “killer”), there’s a Jack’s Lobster Shack, Bill’s Diner, Wicked Noodles, and Hearth Grill.

10 Ways to Stay Out of the Casino (for non-gamblers)