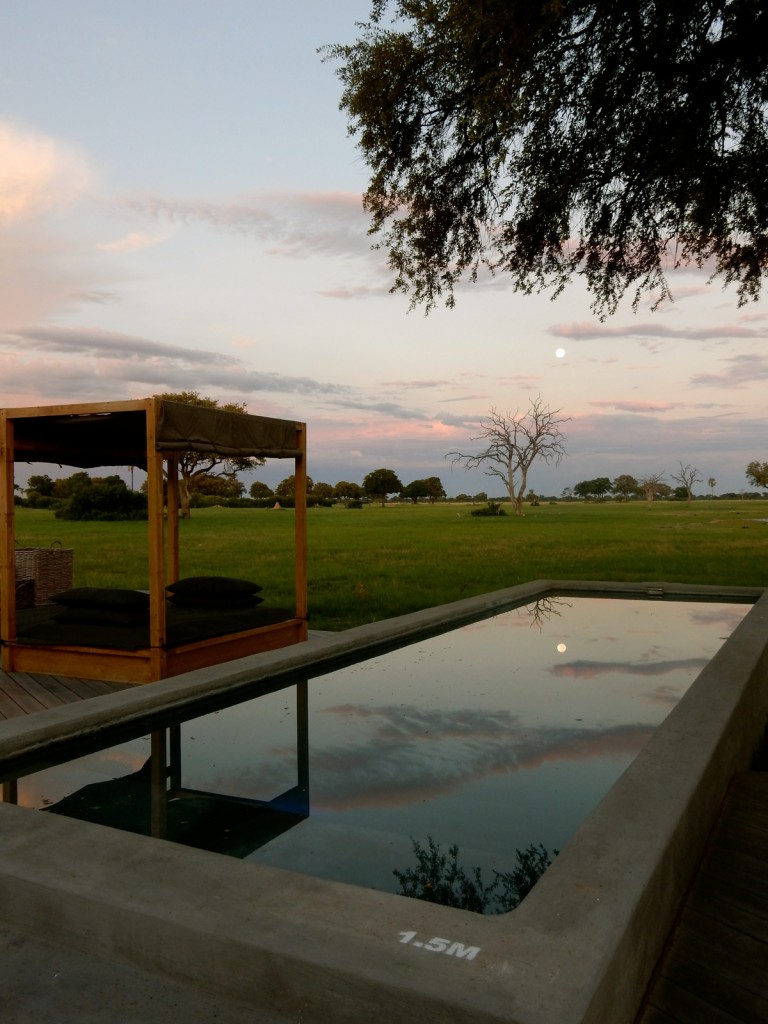 You’ll note the difference even before you arrive to camp. Bowls of hand-made potato chips, wine, beer, hard and soft-drinks await guests in the “Sundowner” shelter, hard by a bumpy airstrip. This is where newcomers to Linkwasha Camp Zimbabwe land in Hwange National Park, after a 50 minute flight from Victoria Falls. 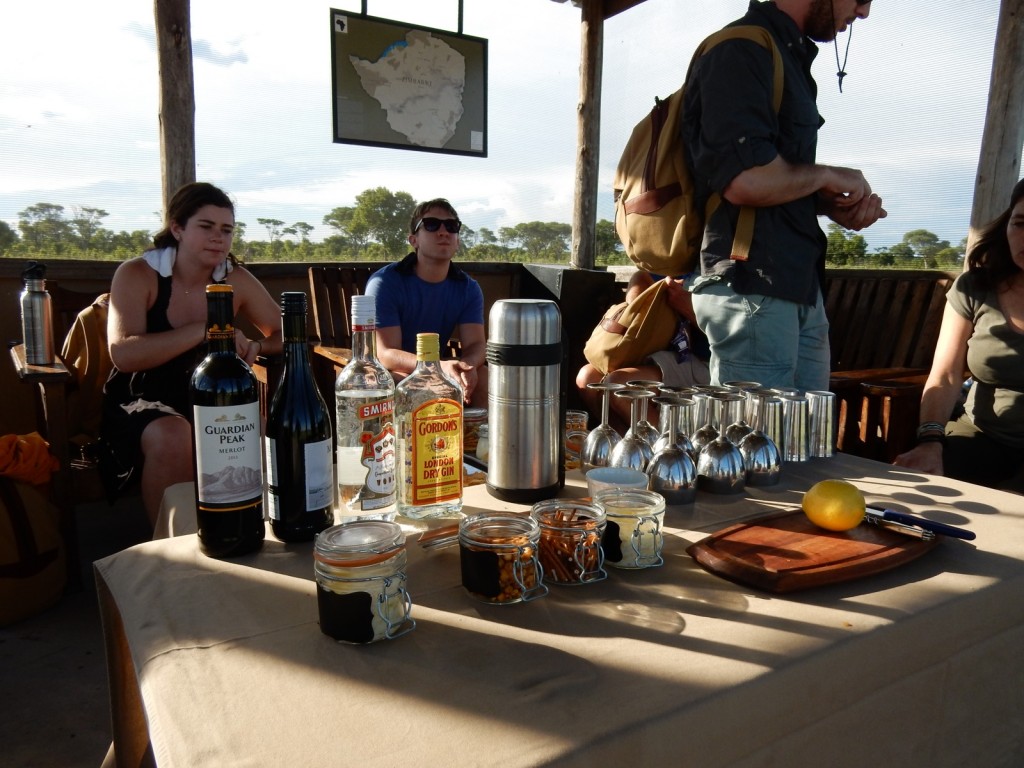 You haven’t even seen one animal yet, but you’re now aware that this is service above and beyond. And the best is yet to come. 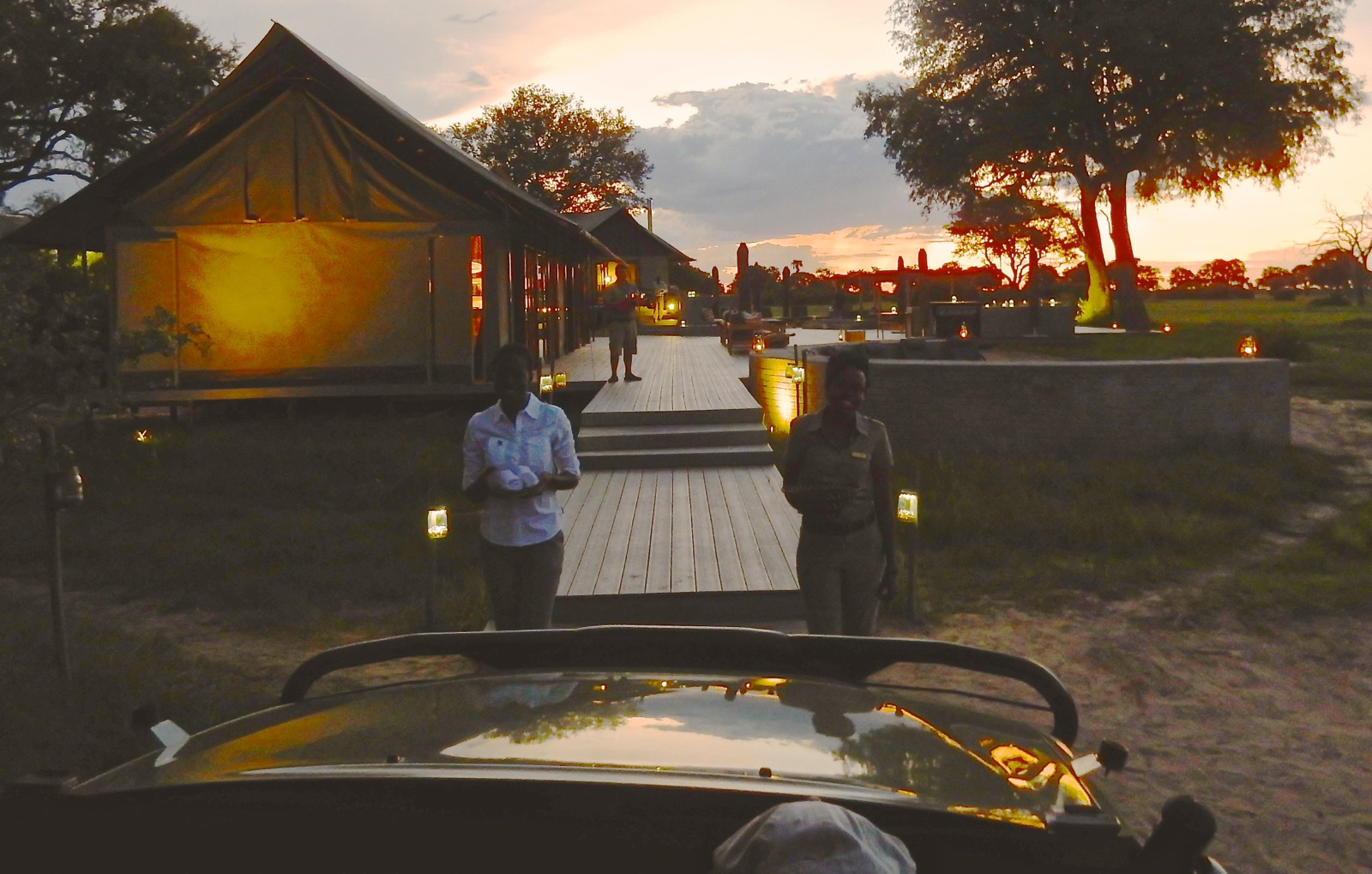 It’s an hour ride from where the bush plane lands to Wilderness Safari’s Linkwasha Camp, reopened in 2015 to great fanfare and acclaim. 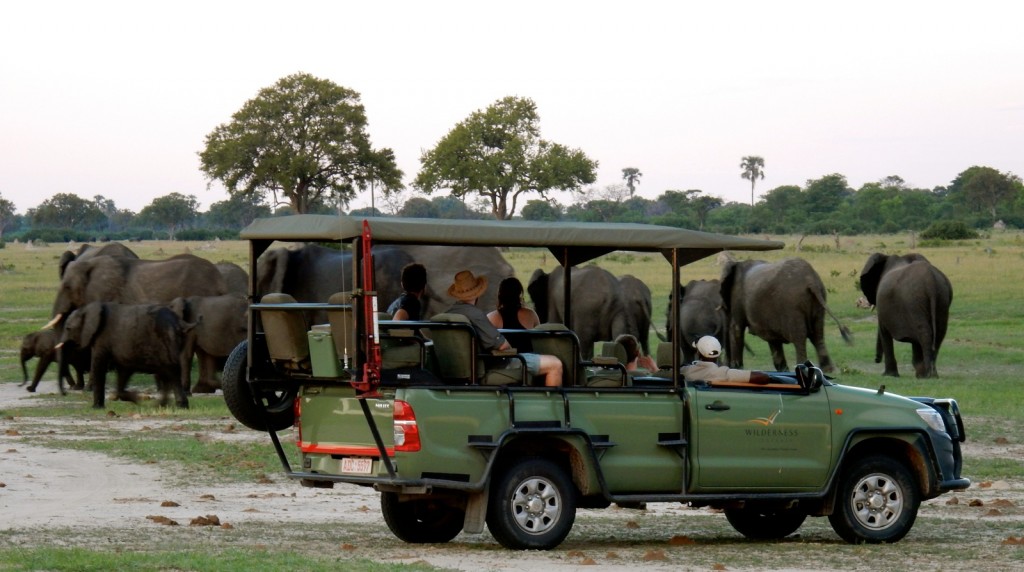 With all the qualities of a superb game drive, the hour flies by, with expert, engaging guides, like the smiley professional photographer, Sam, and the brilliantly eloquent ecologist, Robert, pontificating on a variety of animals doing a variety of things. If you’re lucky, you’ll be privy to a mind-blowing sunset. 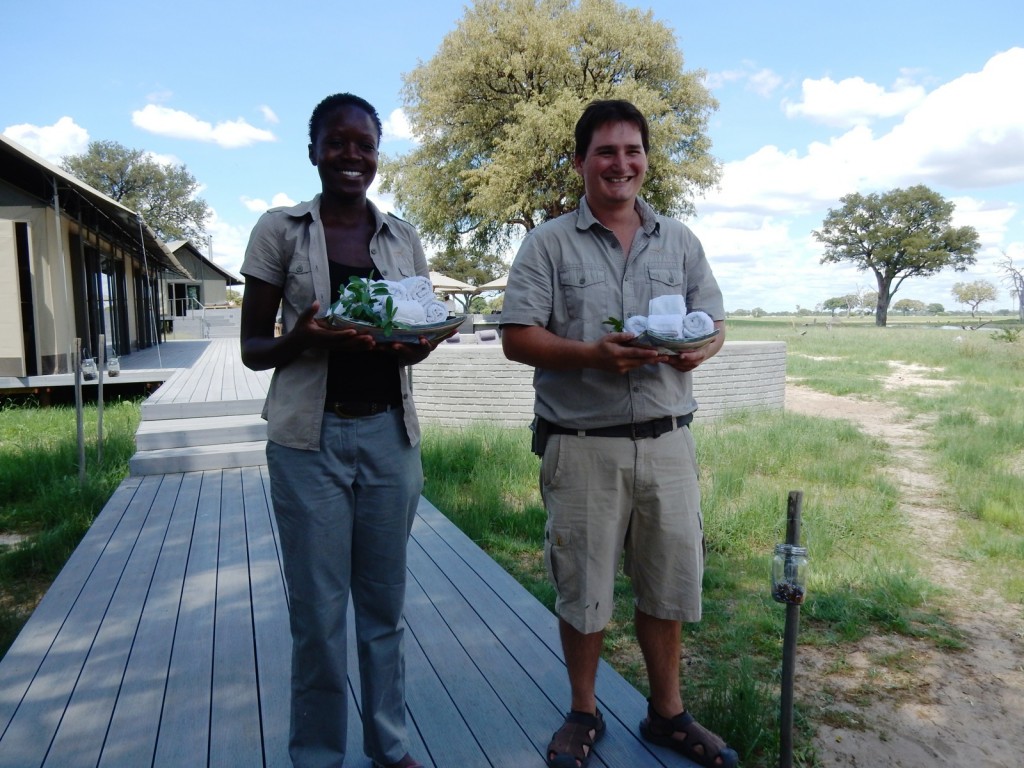 Linkwasha Camp Zimbabwe is classified within Wilderness Safari Camps as a “Classic” camp, meaning a step below “Premier.”

But if Seba Camp in the Okavango Delta is a Marriott, then Linkwasha is a Ritz Carlton by way of Kimpton. It’s a funky fun, boutique, designed in the David Rockwell style of grays, earth tones, natural light and big picture windows.

Experienced Wilderness Safari Camp guests know to expect iced washcloths (in hot summer), cool drinks and a warm welcome from the staff at arrival. This was no different, but the physical beauty of the camp awed us.

The swimming pool, surrounded by upholstered chaise lounges on the gathering/eating deck, overlooks a watering hole several feet away. It glows with indigo-colored light at night. We were told that elephants drink from the pool, just be aware. 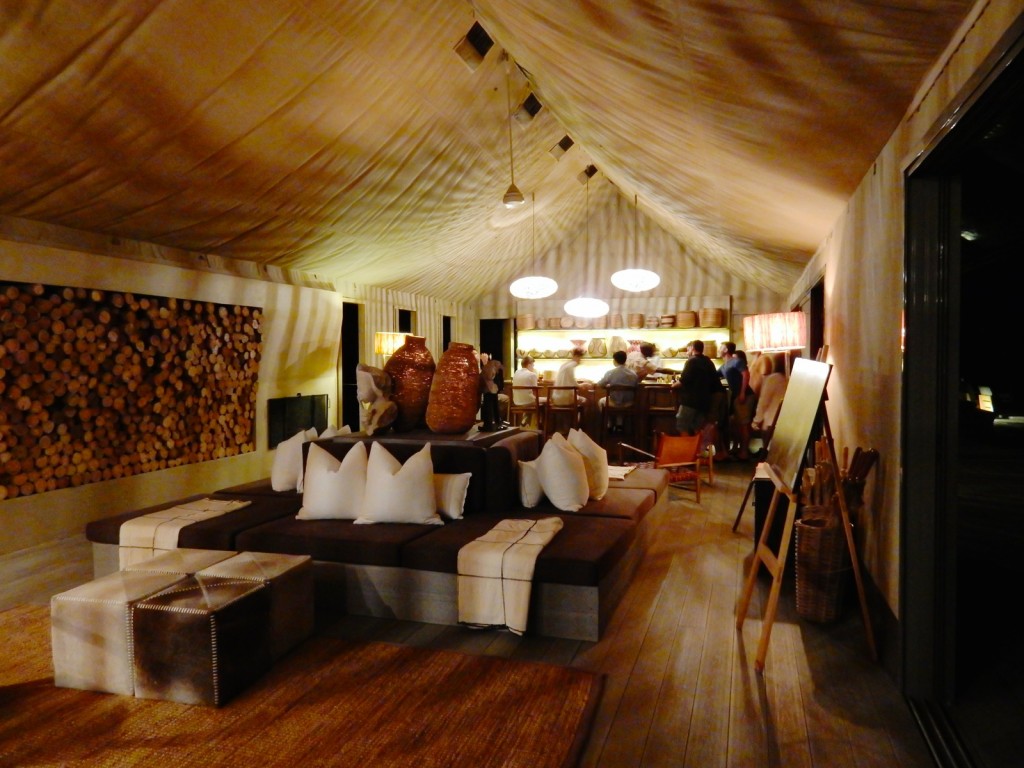 The “living room/bar” enclosure is an aesthetically pleasing assemblage of local arts and crafts and eye-catching furniture that would look at home in a chic NYC hotel lobby. There’s a separate library tent and an enclosed dining structure in case it rains. 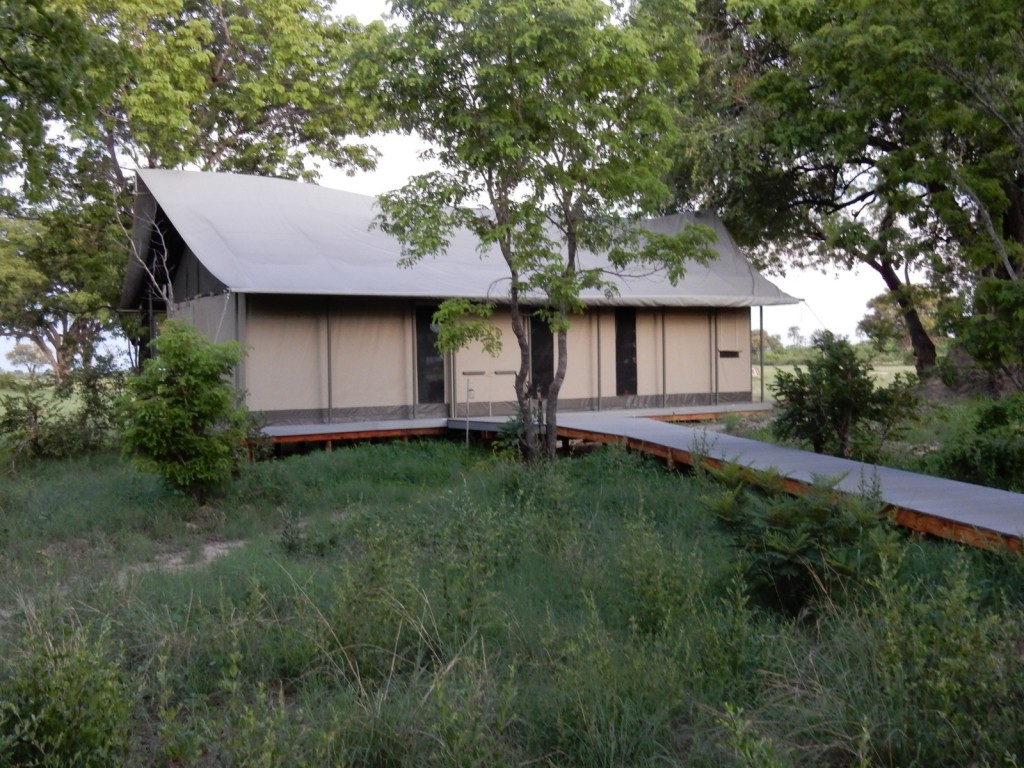 Each “tent” is a canvas cabin, with a wall of windows and glass doors overlooking a sweep of plains.

Rain showers afford wildlife viewing – as exterior walls are windows. There are shelves for clothing, cushy chairs, table, fans and an extravagant king-sized high-thread-count sheeted bed, encased in mosquito netting at turn-down. Bathroom is en-suite. The whole space is larger than many city apartments. 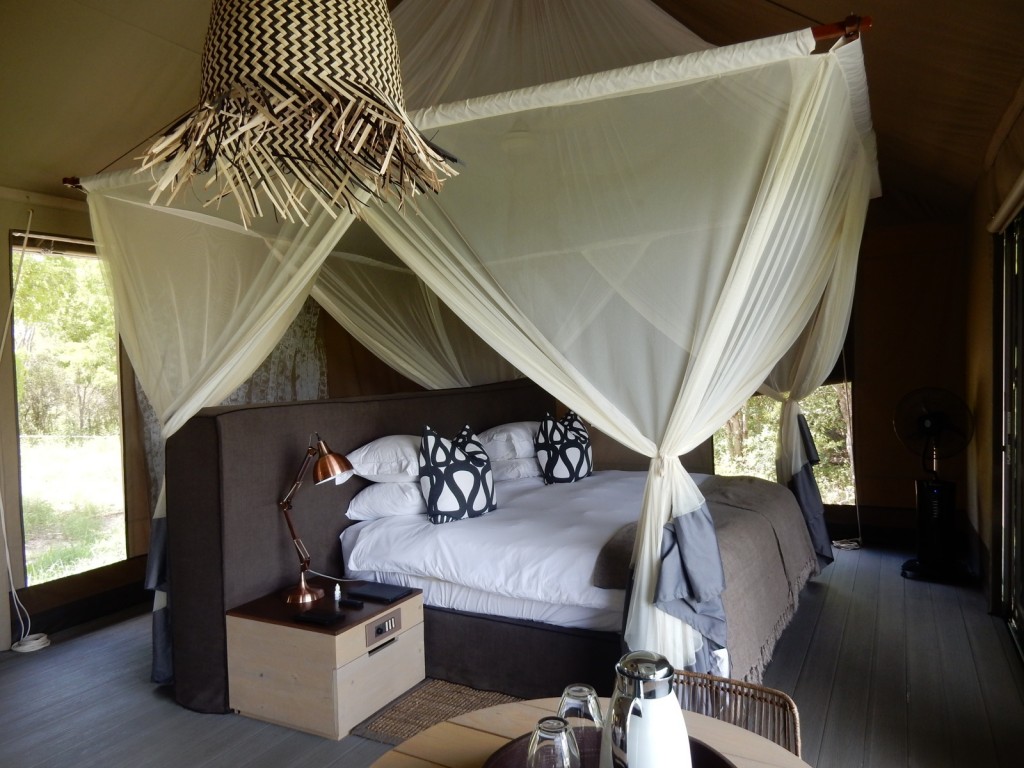 Guest cabins are quite a walk away from the main camp area. After dark, guests must be escorted by a rifle-toting guide. You are instructed to stay inside until morning.

One night, a potentially aggressive male elephant “in musk” blocked our way. and so the guide had to back us up, put us in a vehicle, and drive us around the back way to get us safely to our rooms. That’s the bush. 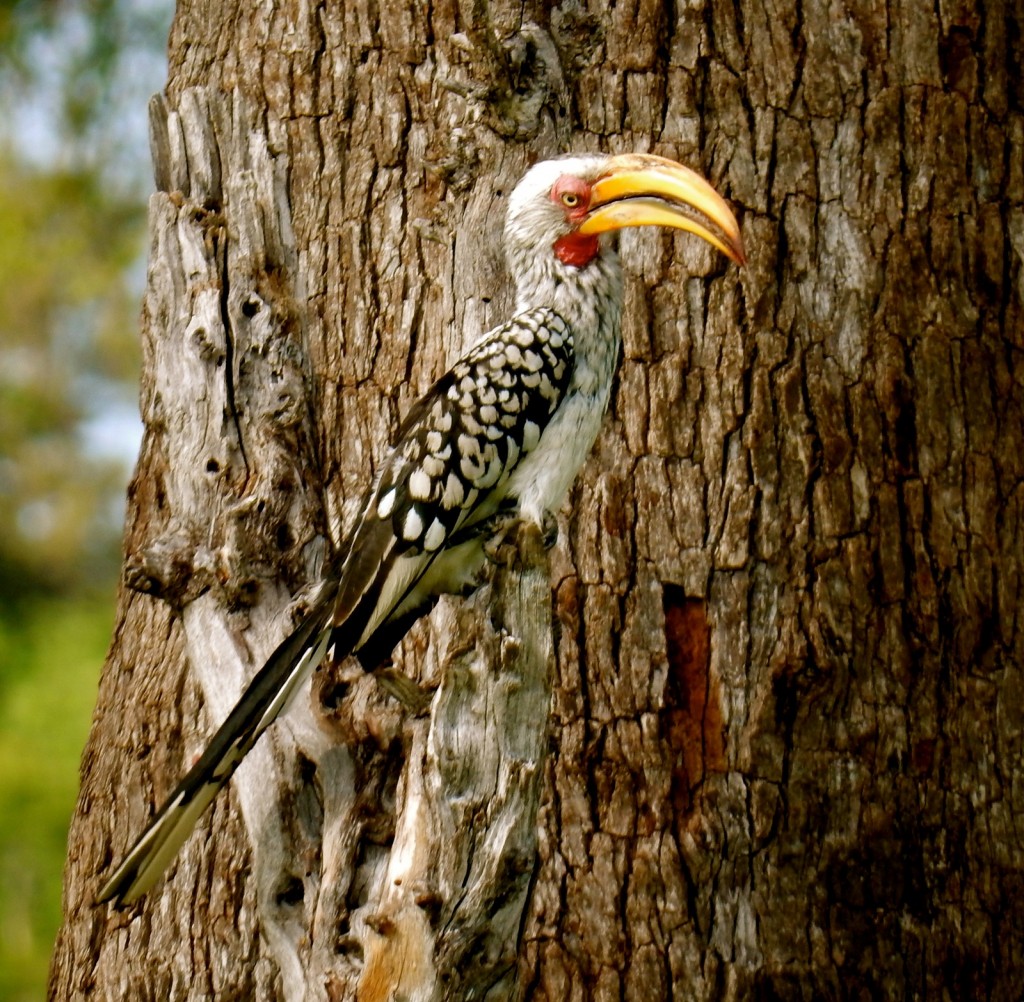 Linkwasha’s main deck is the perfect perch from which to watch a Dung Beetle, the sacred Scarab of Ancient Egypt, bury his precious ball of elephant poop, which we did one evening before retiring to bed. 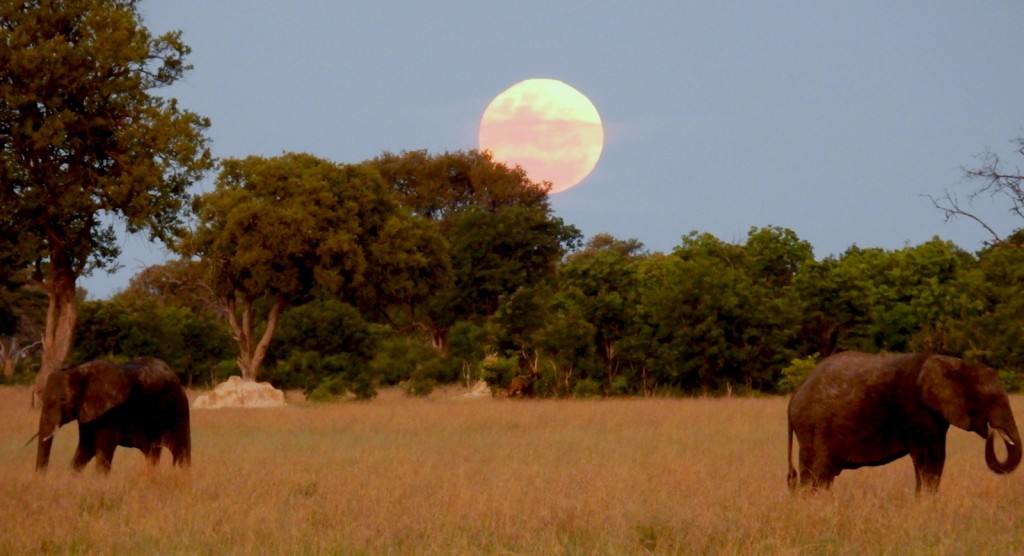 But of course, it’s the larger creatures that draw visitors to these African countries. And there is no shortage of those in Hwange National Park. Even before reaching the camp on our first day, we saw jackals, baboons with babies, and a collection of elephants beneath a large, clear rising moon. 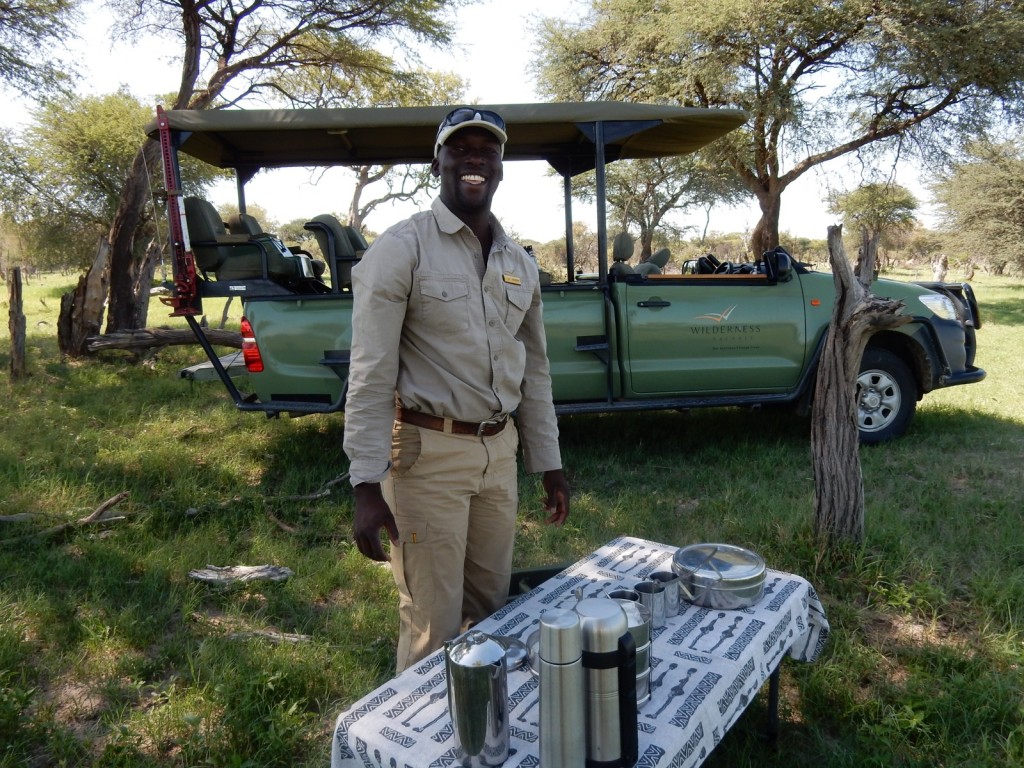 There are two game drives per day: daybreak and sundown.

Guests wake up at 5am, scarf down a quick breakfast and are off on the dirt roads at 6. 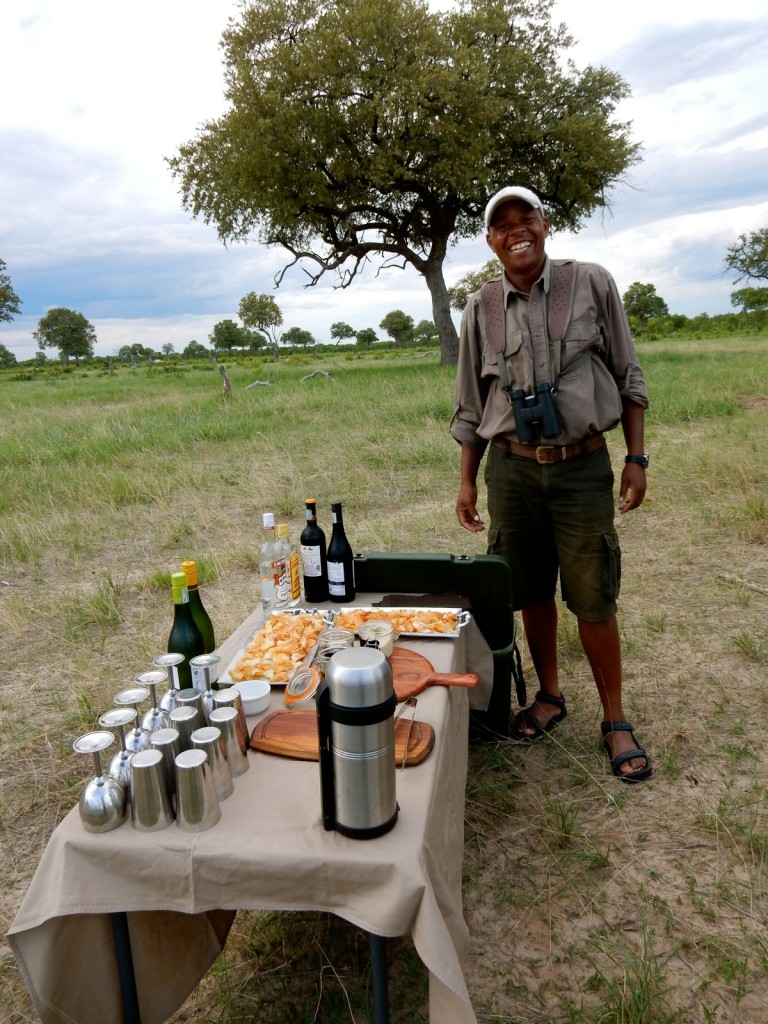 In the afternoon, after 3:30 tea in camp, you’ll once again go out. This time, you stop for a leg stretcher and drinks while watching the sun go down. 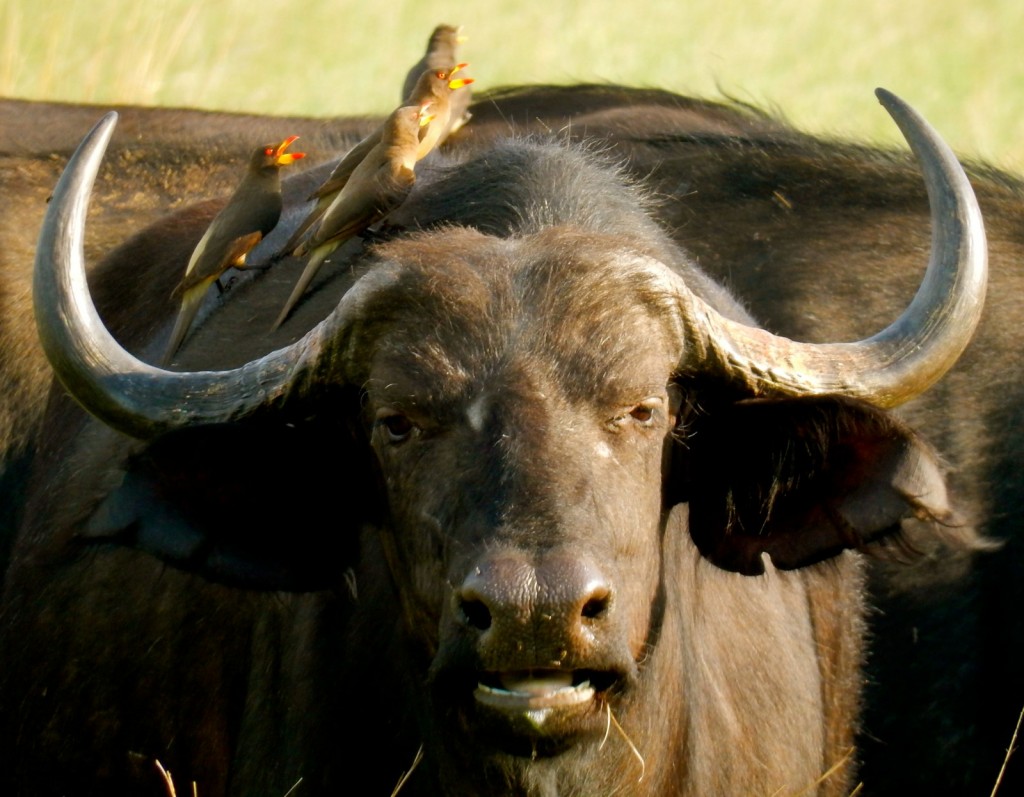 On our drives, we saw rainbow-colored birds, cheetah brothers (“excellent hunters”) chillin’ after a kill, zebras, giraffes, and Cape Buffalo. 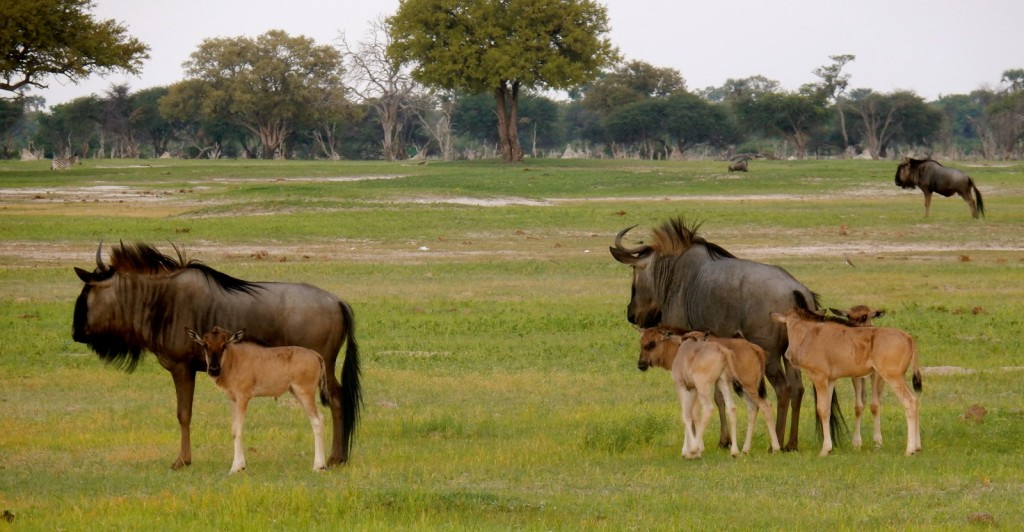 At one point, we witnessed every kind of animal from buffalo to giraffes, sables to wildebeest, warthogs and zebras in vast numbers, grazing on a large plain.

The wide open area was teeming with herds of a variety of animals. It looked absolutely biblical in the dwindling sunlight. 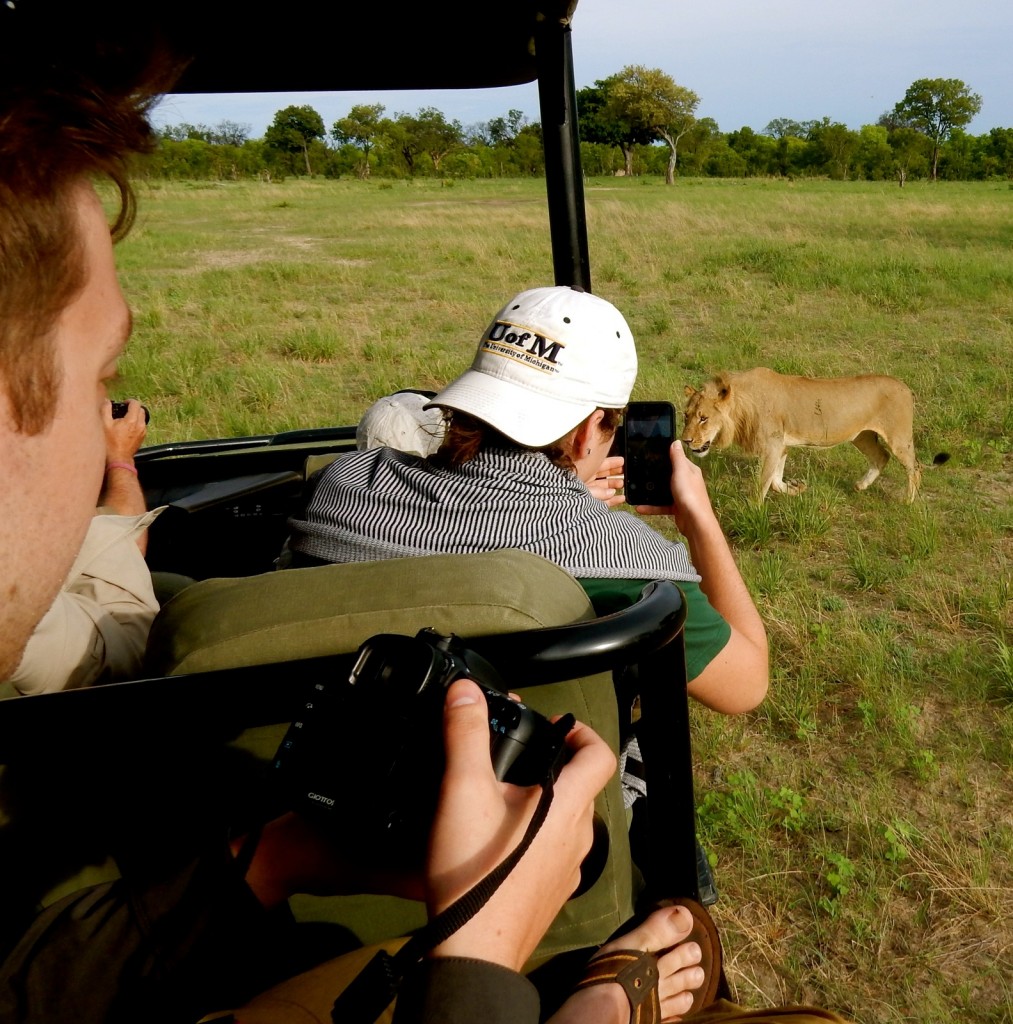 A good guide will find an unfolding story and stay for awhile to narrate. Our guides, Sam and Robert (on alternate days), were experts.

A pride of lions had taken down a sable and one early morning we watched as 22 of them took turns eating. Male dominant first, females second, and offspring last.

And then, we watched as a young male was banished from the pride. By age 2. males are cast out of the group to form their own prides. In this case, the adolescent lion sulked off, walked within inches of our vehicle, and looked back longingly.

Over the course of 45 minutes, he tried to slink back to be with his siblings. As the mother of kids who recently began their own lives, I found this scene both heartbreaking and fascinating. 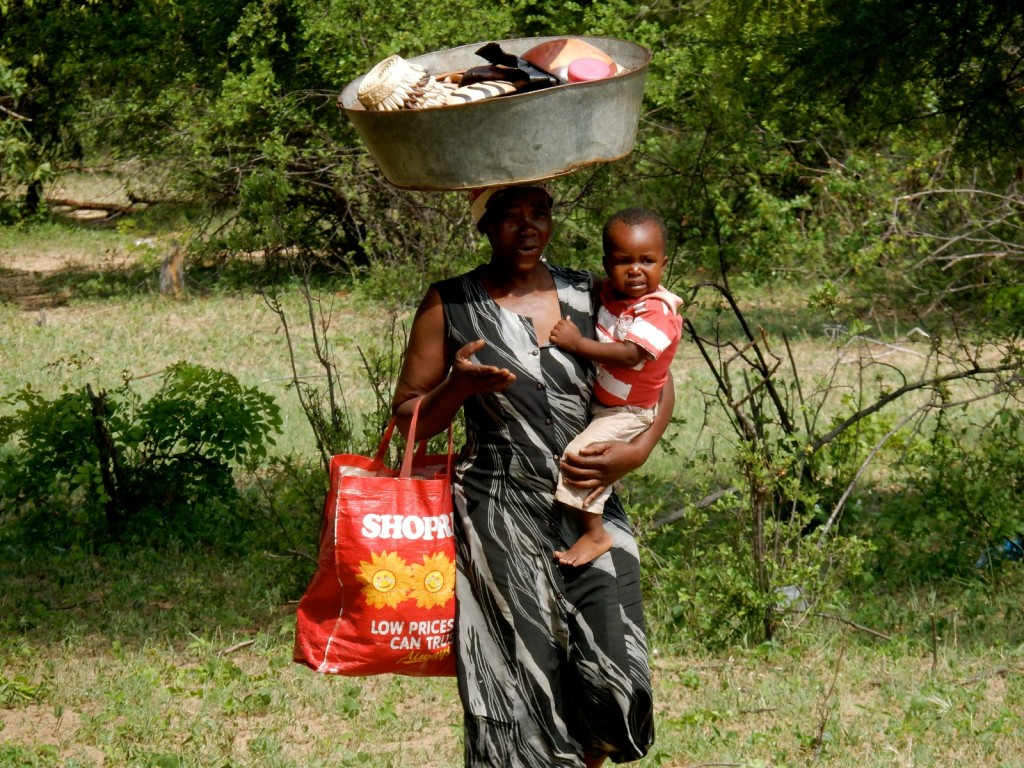 Linkwasha Camp offers a tour of a remote village comprised of 70 homesteads right outside Hwange National Park borders. This foray provides an intimate look at how people live in the bush, and an opportunity for cultural exchange. 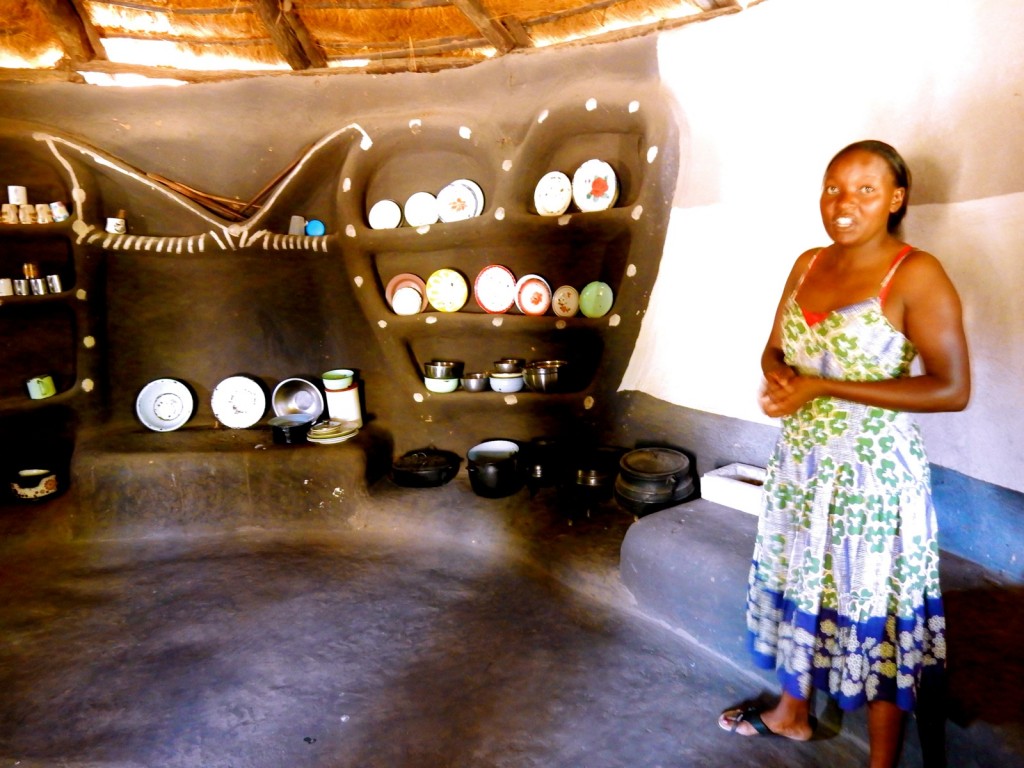 We met with the Headman, Johnson, who oversees this village and three others in the area (and reports to a regional Chief). Villagers still farm with ox and plow and the settlement isn’t wired with electricity. But, amazingly, residents are connected with the outside world.  One solar panel provides enough energy to charge batteries, which are used to power a few lights and two computers in the village school. 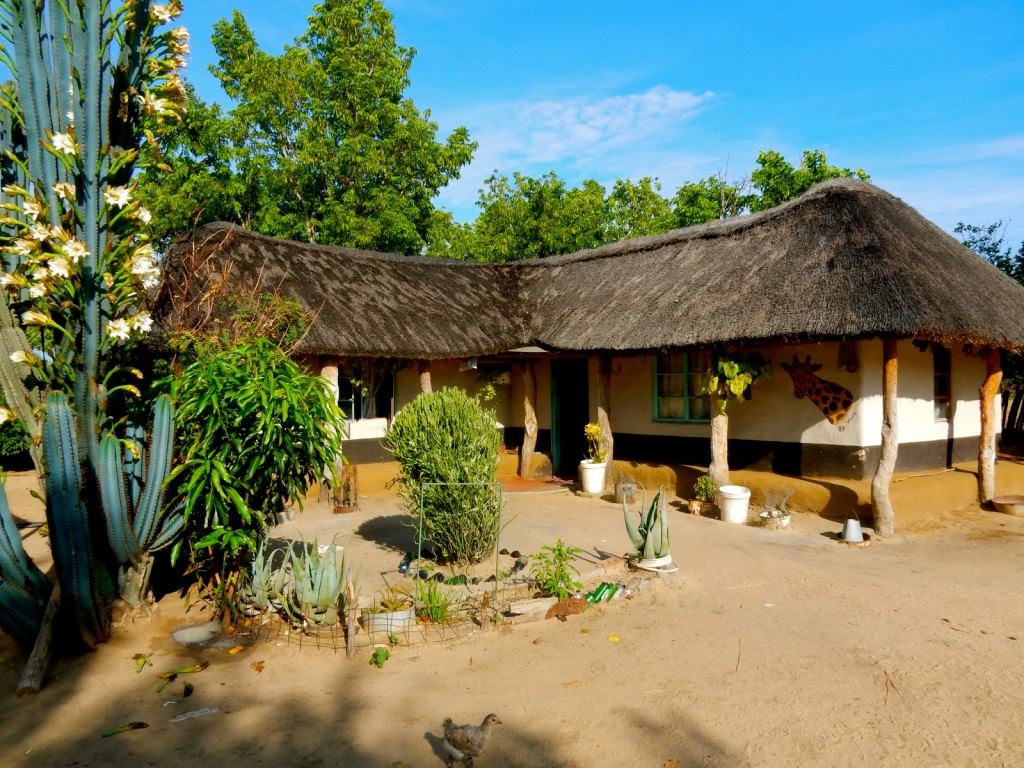 The Headman’s homestead consists of houses for his extended family, a kitchen building, and a beautifully decorated dining hut fashioned from dead termite mound material.

According to Johnson’s daughter in law, women visit other dining huts for decorating ideas much like people here consult lifestyle magazines. Building roofs are thatched with dense grass bound by tree limbs. The headman’s house is thatched, too, but more modern and landscaped like a Tucson patio home.

We sat down with Johnson for a chat. We were stunned by how informed he was about world affairs, more so, I’d wager, than the average American. He was especially savvy about news from the USA. Johnson was surprised that our country would be so open minded as to elect a Black president. He followed our wars in Iraq, Afghanistan and the “Arab refugees.” 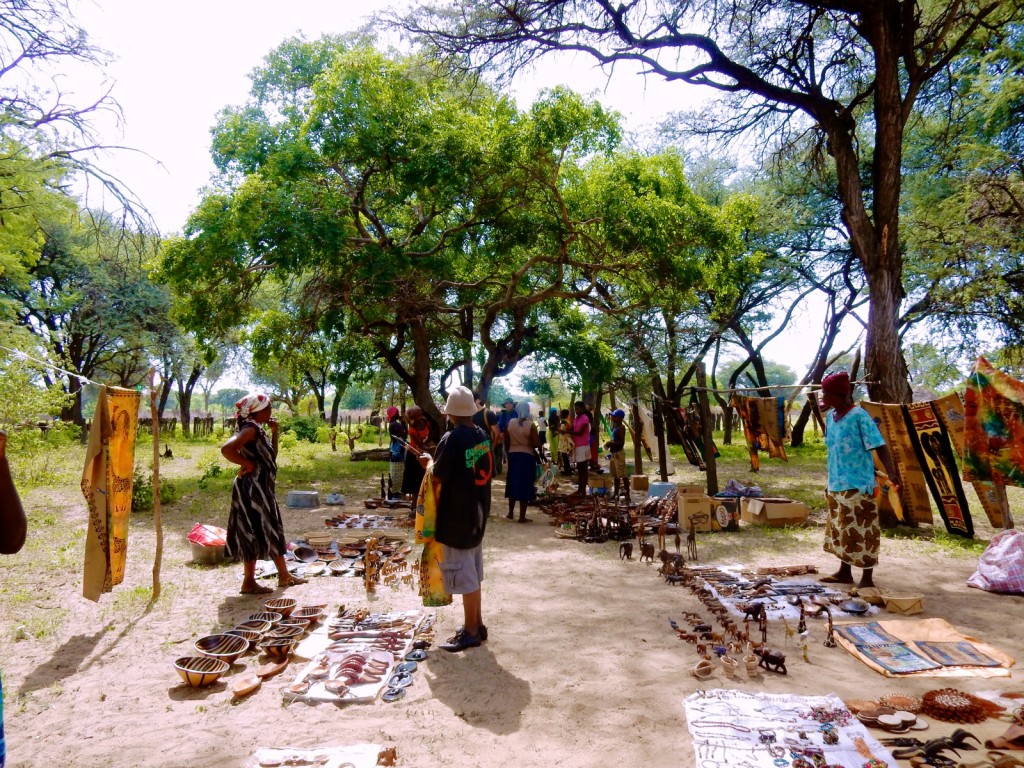 Please bring US dollars if you sign up for this village tour. There’s plenty of shopping to be done at the Market, where a dozen or so merchants sell beautifully carved bowls, figures, salad spoons, textiles, bags and jewelry. Village income from these goods can mean the difference between eating and going without food, especially in drought years when crops are scarce. 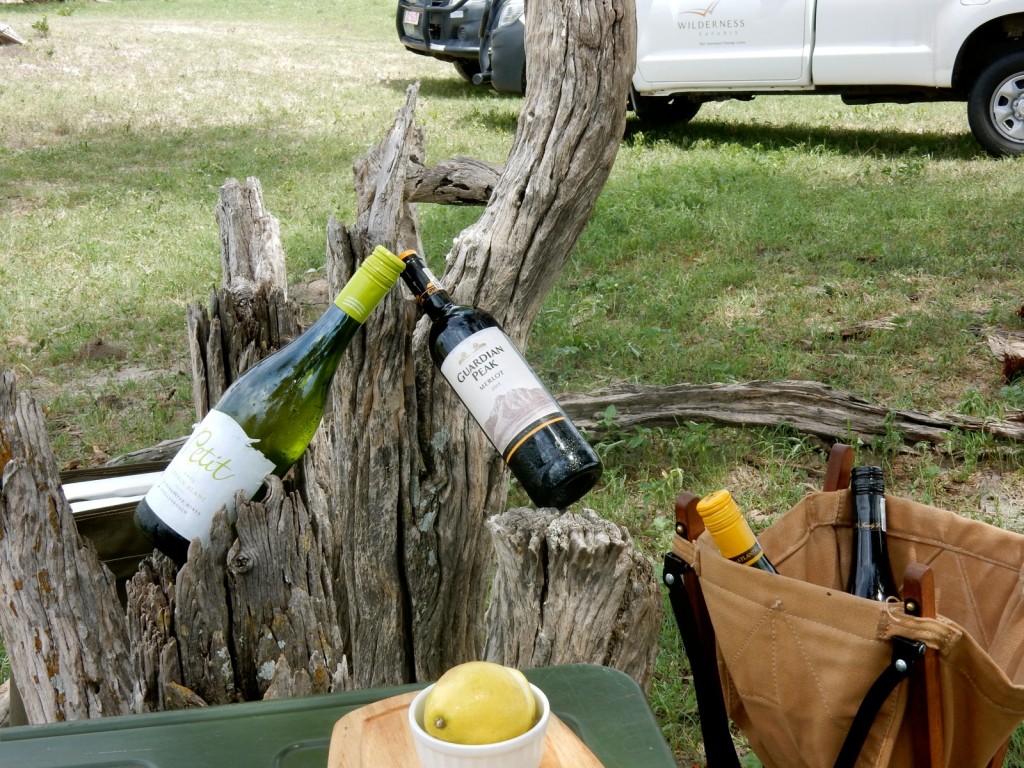 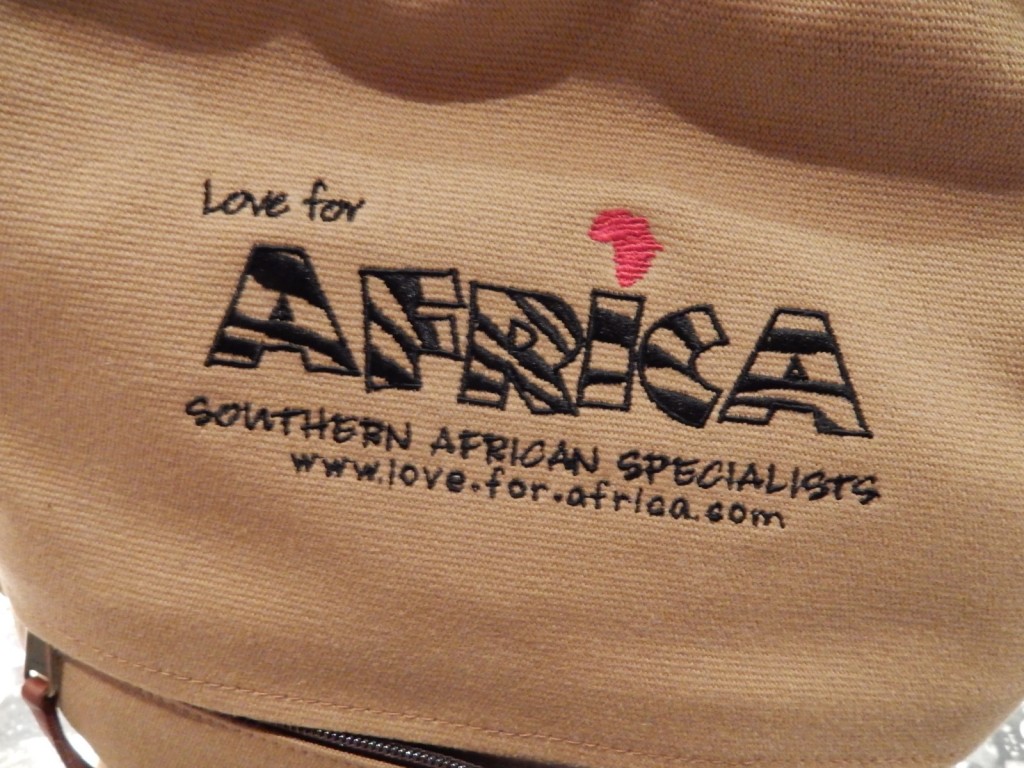 To get the most out of a Photo Safari trip to Southern Africa, have an expert tour company, Love For Africa, make arrangements. Wilderness Safaris is one of the best companies in the region. But there are other camps and activities to choose from, depending on your time and budget. Love For Africa, based in Victoria Falls is helmed by former Wilderness Safari Camp Guide and Manager, Blessing Munyenyiwa.  Blessing was guide for Disney Animal Kingdom and Director of Kid’s Programming on Disney Cruises.