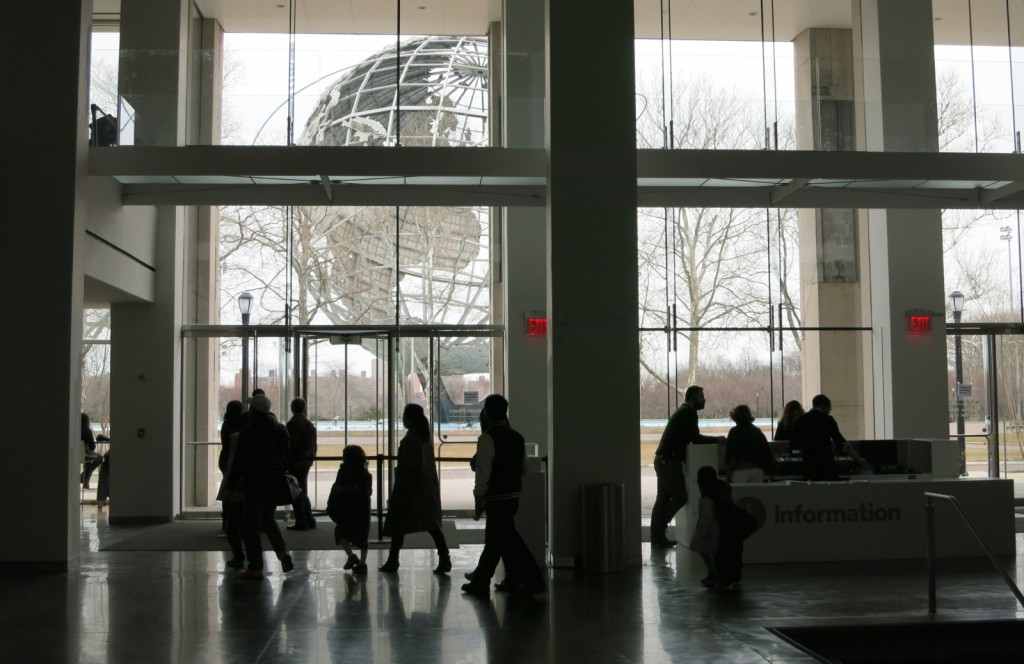 WHY GO: There are three reasons most people come to Flushing NY in Queens – the least glamorous of the five New York City boroughs.

First, for the jets that fly in and out of LaGuardia and JFK Airports. Second, for the New York Mets – who play at Citi Field. And third for the nets – as in the nets on The USTA Billie Jean King National Tennis Center courts, home of the US Open. 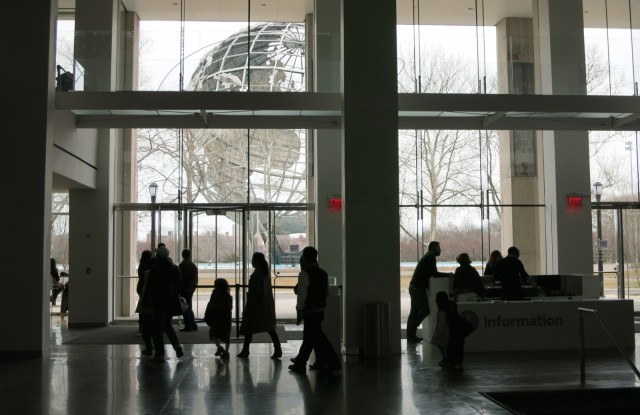 But there are other reasons to spend a couple of days in the world’s most diverse borough, where 200 languages are spoken within its 172 square miles. Leave it to the Getaway Mavens to let you in on the best, most insidery ways to explore it.

Queens happens to be New York City’s largest borough, so this Getaway takes you to just one corner of it, Flushing NY and Corona.  It’s got some of the best authentic Chinese cuisine on the planet, a recognizable 140 ft. high steel globe, a surprising jazz-great connection, and a nice and inexpensive boutique hotel.

If you yearn to visit China, but don’t have the time or the bucks, this getaway is the next best thing.

Things to Do In Flushing NY and Corona NY 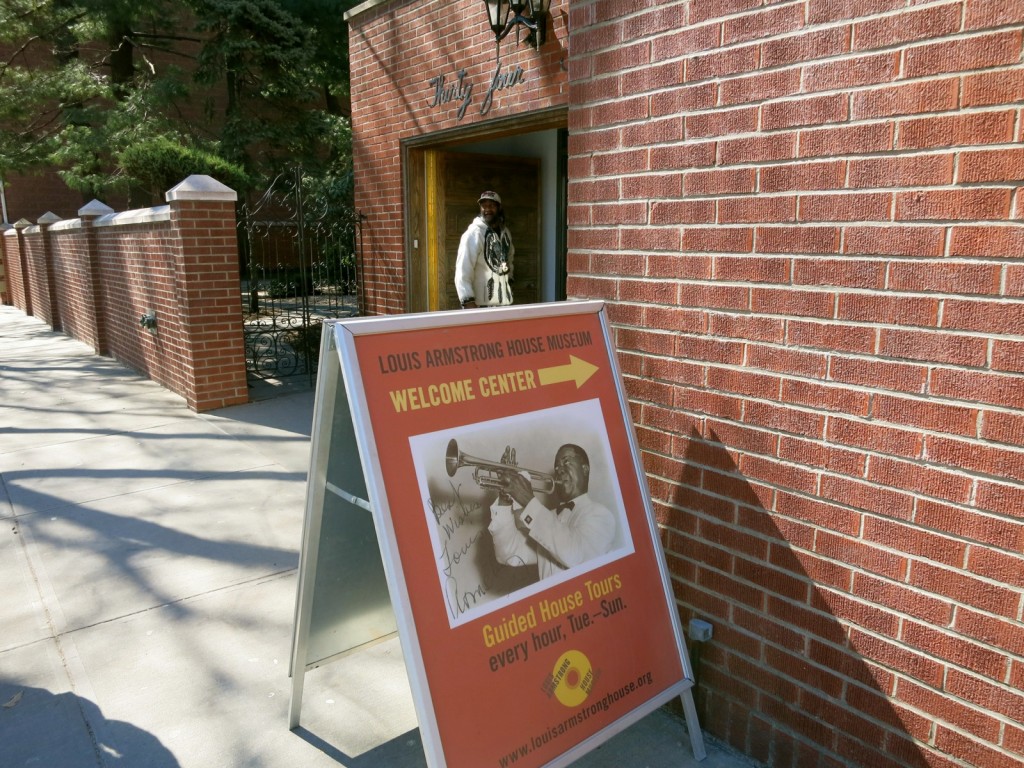 Yes, the famous gravel-voiced trumpet-master most identified with Louisiana, swing, scat, “Hello Dolly,” and jazz in general, actually lived for the last 28 years of his life in Queens, NY.

Armstrong, whose nickname, Sachmo, is a contraction of “Satchel Mouth,” was born in 1901 to a New Orleans prostitute. Despite that, he rose from poverty to become one of the most famous musicians of our age. Armstrong appeared in 30 movies and on almost every television show of the time.

Never one to flaunt his wealth, Louis and his fourth wife, Lucile Wilson moved into this humble home in 1943. Known for their generosity – he was “Uncle Sachmo” and she was “Aunt Lucile” – they’d invite the kids in the neighborhood into their living room to watch that new invention, the television.

In fact, Louis wrote his iconic song, “It’s A Wonderful World,” about his little slice of heaven on this working class block.

Your tour begins in the small visitor’s center housed in the former garage stocked with memorabilia, including a gold plated trumpet; a gift from King George V.

Inside the house, everything is exactly as Lucile left it after her death in 1983 (Louis died in ’71). While taking in their small but exquisite living room, listen to clips of Sachmo’s unmistakable voice – Lucile correcting him in the background.

Lucille decorated the home with the most cutting edge accoutrements. Her state-of-the- art futuristic kitchen, with gleaming turquoise colored cabinets, cost more than the whole house. Time Magazine once featured a photo shoot of the Armstrong’s lavish mirrored bathrooms. 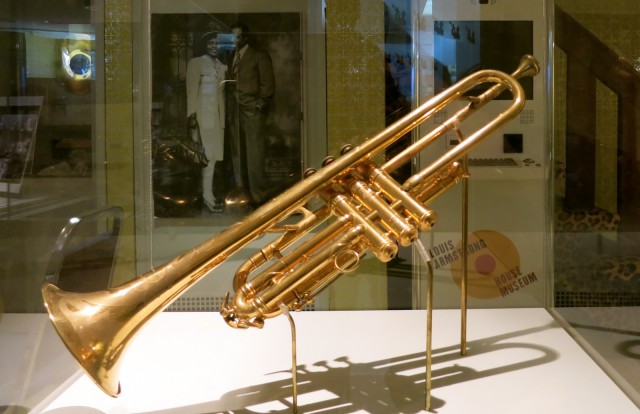 The jazz great required a lift-chair to the second floor after two heart attacks. The couple’s bedroom is a fantasia of off whites, silver wallpaper, gold bathroom fixtures and hidden speakers (behind wallpaper). The tinselly walk-in closet is as show biz as it gets.

Louis was most at home in the library/study he called his “den.” His Marantz receiver and Tandberg reel to reel take up much of the shelf space behind his desk.

A portrait of Armstrong signed by “Beniditto” was one of Louis’s favorites. While appearing on a talk show, he revealed that the artist was actually his good friend, Tony Bennett.

Once again, you’ll hear his voice, thrilling to the fact that for the first time in his life he had his own room to retreat to. Louis Armstrong claimed to have been born on July 4th, 1900 but his actual birth date was August 4, 1901. So both dates are celebrated at his home every year, with birthday cake served in the garden. $10 adults, $7 children, Tues-Fri 10-5, Sat Sun 12-5pm.

The Queens Museum was not always a museum. From 1946-1950 it served as the temporary home of the United Nations General Assembly while the Le Corbusier slab was being built on the East River.

In fact it was here, in 1948, that the world voted its approval for establishing of the State of Israel.

Adjacent to the 1964/65 World’s Fair Unisphere, the space became the Queens Museum in the 1970’s. It faded into a stuffy, dark, not quite engaging place before being thoroughly renovated and reopened in November 2013.

Enter the front doors to a vast windowed main floor and a spectacular view of the steel globe that looms outside.  The museum’s signature exhibit – the New York City Panorama – has been preserved, saints be praised, and remains THE reason visitors make the trek here.

Built thirty years ago of balsa wood and acrylic, half inch to one hundred foot scale, it’s a must-see for anyone who wants a pilot’s eye view of all five NYC boroughs. Originally constructed as a “ride” for the New York World’s Fair (moving cars circled it continuously), it became part of the museum in the 1970’s. 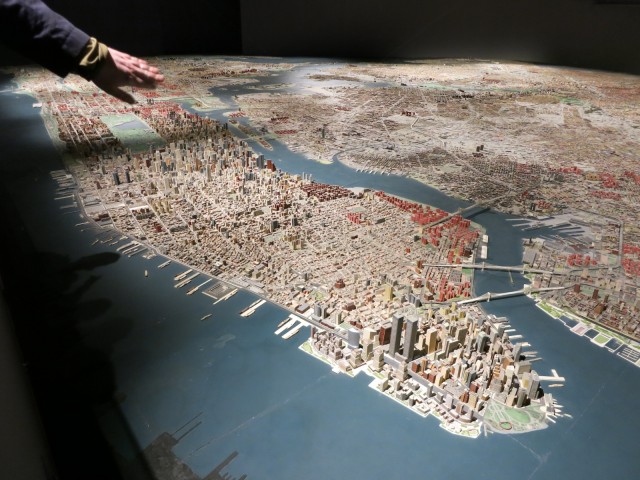 In addition to the Panorama and rotating avant-garde installations throughout most of the museum, there are several permanent exhibits.

One highlights both World’s Fairs held on this site in 1934 and 1964/65. It’s quite amazing to think back then that dimes blasted with radiation were acceptable and sought-after souvenirs. 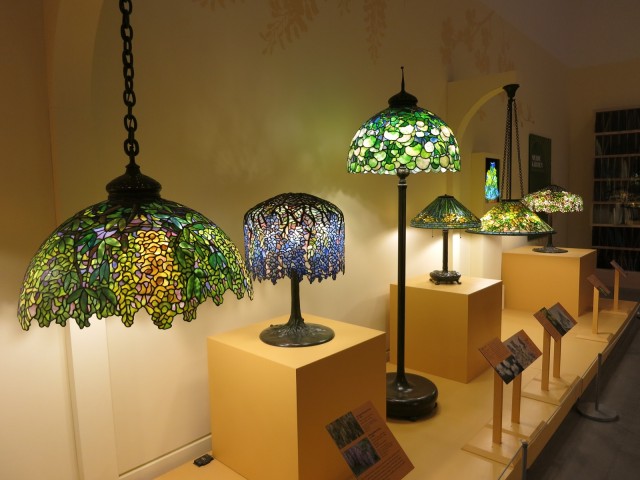 Artisans created curved, natural organic lamps (the first using light bulbs rather than oil) and mosaics for forty years.  Unfortunately, the geometric Art Deco craze put them out of business.

To get here, snake around the roads through Flushing Meadows-Corona Park past the USTA Billie Jean King National Tennis Center. And then park. For free. $8 adults, kids under 18, free. Open Wed-Sun 11-5,   Tours Sunday 2,3,4pm free with admission. 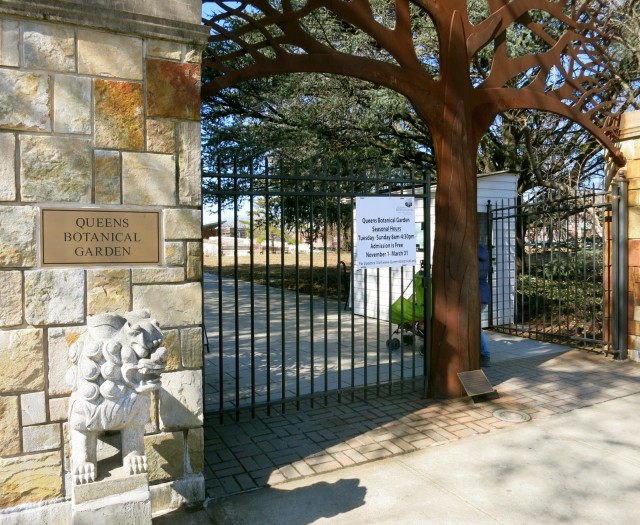 The Queens Botanical Garden is a small but pretty respite in the bustling center of Flushing.  Meander around and you may witness a solitary practitioner of Tai Chi, an elderly couple strolling hand in hand, or parents pushing strollers on paved paths. 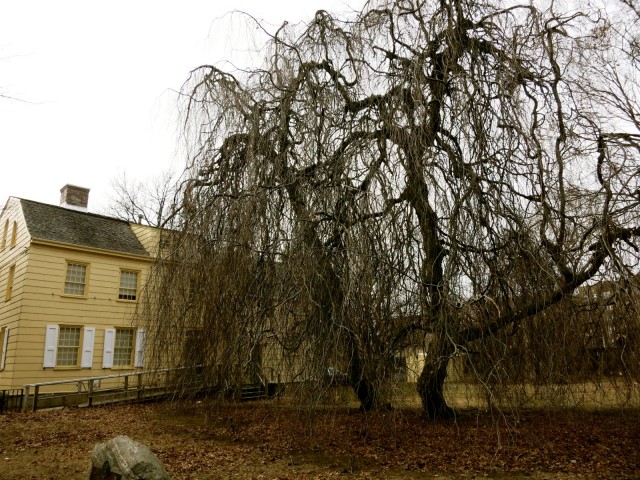 Once upon a time, Queens was farmland, and two buildings remain from that period. Kingsland – a landmark 18th-century bright yellow Dutch-Colonial farmhouse – now serves as the Queens Historical Society. (The second is the Voelker Orth House profiled below).

What makes Kingsland home so worthy an attraction is the lengths taken to save it from the wrecking ball. Built in 1785, it was moved twice – the first time in 1923, to make way for the developing subway system and the second in the 1960’s for a shopping center.

Now in this tree shaded pocket park, it seems out of place next to a lively children’s playground and multi-level apartments. This park is the site of one of New York’s first animate objects to receive “Living Historical Landmark Status” in 1966.  It’s a Weeping Beach Tree, planted in 1847, that lived 150 years before dying in 1998. $5, adults 2:30pm – 4:30pm, Tuesday, Saturday & Sunday. 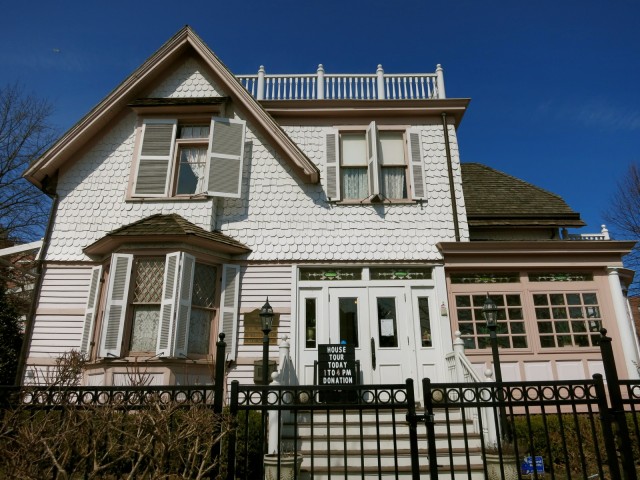 In 1899, Conrad Voelcker, a publisher of German newspapers, purchased this Edwardian style home  shortly after the Long Island Railroad was built. It was but one of a few houses in a brand new farmland development.

In 1930, Voelcker left the dwelling to his daughter, Theresa, and her husband, Rudolph Orth, a police surgeon. When the last of the family died in 1997, the house was rundown and in great disrepair.

Thankfully, preservationists rescued this representation of Queens past, and restored it to its early 1900’s appearance. Interestingly, curators chose to display Orth’s sweet “courting letter” to Teresa Voelker in the main parlor.

There are a plethora of hole-in-the-wall restaurants in downtown Flushing, each with its own set of die-hard fans.  You can spend months trying them all out, parsing the best dim sum, hot pot, dumpling, noodle, Szechwan spot. Or start with these, and let us know your own favorites….

The Bakery is renowned for its creamy “Egg Tarts” –a French treat appropriated by Chinese pastry chefs.

EAT: The Shops at Queens Crossing

The Shops at Queens Crossing offers everything from delicious dim sum and bubble tea to high-end contemporary Asian fare.  This inexplicably includes an Asian fascination with upscale French pastry. Paris Baguette is generally swamped at all times. 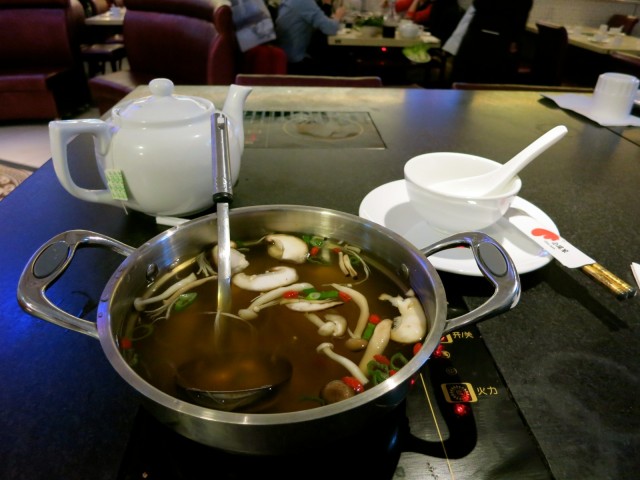 Do you like lamb?  Do you enjoy hot-pot cuisine?  Then, you’ll love this spot next to Applebee’s in the Skyview Mall – one of just two Little Lambs in the USA (the other is in Boston).

Order raw ingredients (veggies, meats, noodles) and stick them in the boiling broth of your choice placed on an induction stove in front of you. It’s the ultimate in fresh fast food and incredibly flavorsome. 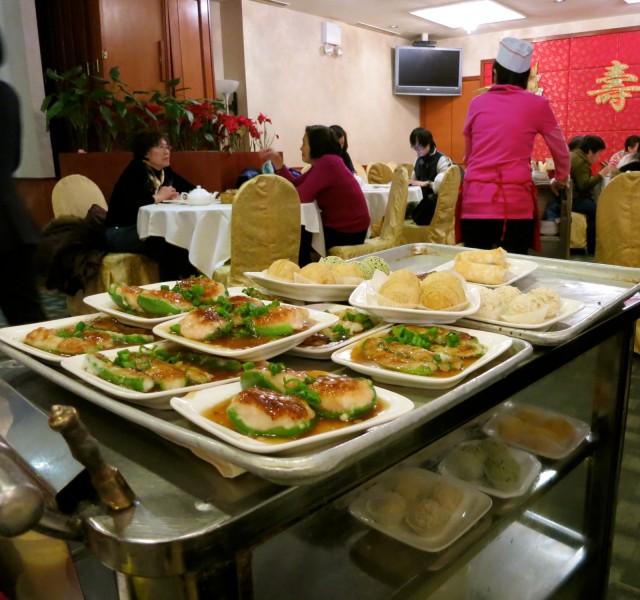 Carts laden with steamed pork buns, fried shrimp, wilted bok choy and dozens of other dishes come around every minute. Crammed with locals on a Monday afternoon, chances are, if you are an English-speaking Caucasian, you might be the only one within sight.

*  The Golden Mall is now “Closed for Renovations.” But, patrons would formerly duck down into what looked like a grungy delivery hallway to find a warren of fast food noodle and dumpling shops.

Locals were so fanatical about the choices here, they encouraged the best of the lot to relocate nearby.  Xi’an is famous for its hand-pulled ribbon-shaped noodles in simmering lamb soup.

And Tianjin Dumpling lovers are prone to using superlatives to describe these handmade treasures. Not so surprising that this modest place was a James Beard Award finalist. Now called Dumpling Galaxy, it’s located inside HK Supermarket.

Where to Stay in Flushing NY 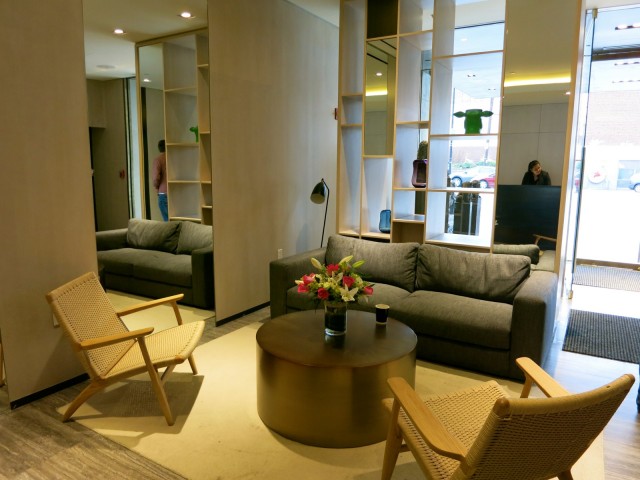 This 96-room boutique hotel, situated on a strip occupied by car part shops and the Big Box Skyview Mall, places you squarely in Asia.

Overlooking LaGuardia Airport, planes fly so low, you can see their underbellies from the floor to ceiling windows in your streamlined, and yes, Zen-designed room.

Rooms cast in wood and eggshell white feature extremely comfy beds, flat screen TVs, and pristine subway tile bathrooms. Each is a serene oasis from the frantic hustle and bustle of life just outside on Roosevelt and Main Streets, where street signs are both in English and Chinese.

Some not even in English. The Parc draws a mostly Asian clientele, as well as airport personnel and travelers.  Feeling the roar of mighty jet planes just yards overhead as they prepare to land is a thrill you won’t get on any other rooftop bar in New York City. Room rates $90-$160 per night include complimentary continental breakfast and wi-fi. 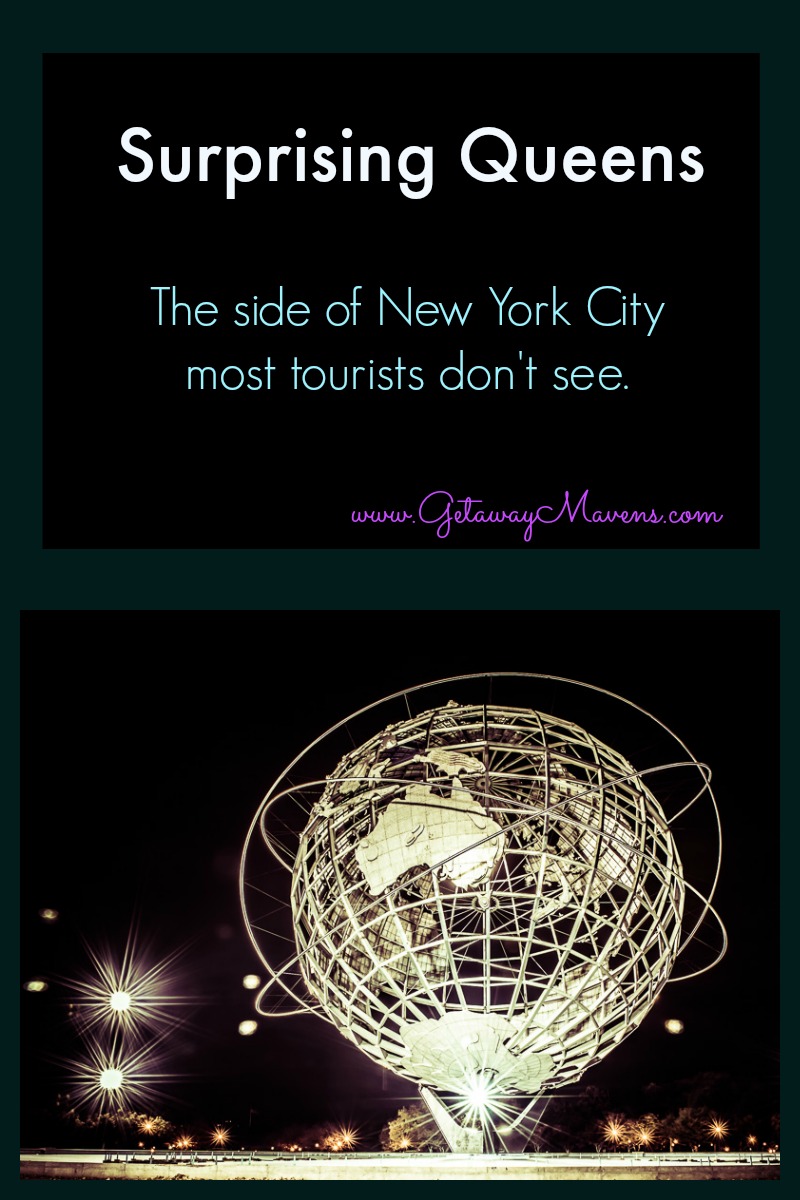